A trivial feature until you want it. Then it's pretty darn cool... (Caution: Leica oriented...). 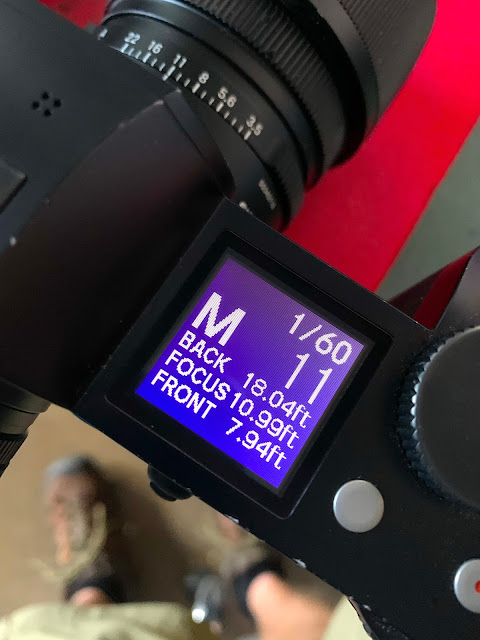 One thing I dislike about nearly all the "focus-by-wire" lenses out on the market is the inability of the user to set the lens to a specific distance without having to bring the camera to your eye, focus it, lock focus and then wait for your subject to be in the optimal spot. Especially frustrating when it comes to street shooting or discreet photography where pre-focusing on a certain distance can be very effective.

Remember the days of manual focus lenses? They had distance scales on them, long focus throws, and detailed depth of field scales. You could set your 24mm lens to something like ten feet, set your aperture to f11 and be sure of getting good sharpness from 7.94 feet to 18.04 feet. Or somewhere in the very close ballpark.

Not so with all the enormously expensive and oversized lenses we now have offered to us for our modern cameras. Big use-ability steps backwards at many turns. At least for people who like to zone focus, pre-focus or use the idea of hyper-focal distance setting.

I'm not sure how Sony, Fuji, Canon or Nikon deal with this but there is a nice solution for Leica SL, SL2 and SL2-S users. If they are using L system lenses on their cameras and they set their lens to manual focus then a half press on the shutter brings up a nice graphic on the camera's top screen. If you've set the aperture to a specific f-stop as you turn the lens focusing ring the display will read out the exact focused distance, the focus behind the point of sharpest focus that will still be acceptable (back), and the distance at which the system will still be in focus in front of the camera (front).

I tested this feature out again today. It works with native Leica SL lenses, Panasonic L mount lenses and Sigma L mount lenses. I don't know if other camera makers offer the same feature or something similar but for people who like to, want to, or have to manually focus anything less is a deal-killer. Yep. Deal-Killer.

This isn't "new tech." In the M Leica world this sort of necessary and helpful information was right there on the lens for immediate visual access. And in fairness it was on all camera makers' manual focus lenses back in the day. The disconnection started with AF systems and got progressively worse in the digital age.

Sure, Fuji and Sigma make lenses with manual aperture rings but few of them have marked distance scales and even fewer have depth of field marketings for the most used apertures. Panasonic and Olympus and Fuji make a few lenses with clutches that put the lens into a fully manual mode with hard stops at both ends of the scale and good distance and depth of field scales. That's the way to handle it on the lens side of the equation.

But for all the other lenses the Leica SL, introduced in 2015, set the standard for this kind of usability feature.

Not trying to be a brand champion here but I will say it's a feature I can see all kinds of use for in practice. Especially with the wider lenses.

The perfect reason to buy a $7000 Leica SL2 body? Maybe not quite. But if you are locked into a system that doesn't have this feature, or something similar, you might consider banding together with other like minded users and starting a letter writing campaign. It might just work.

Posted by Kirk, Photographer/Writer at 17:09 15 comments:

Part of being engaged in photography, for me, is seeing really wonderful work. Seeing it printed and well displayed. So, let's talk about a show I saw yesterday. 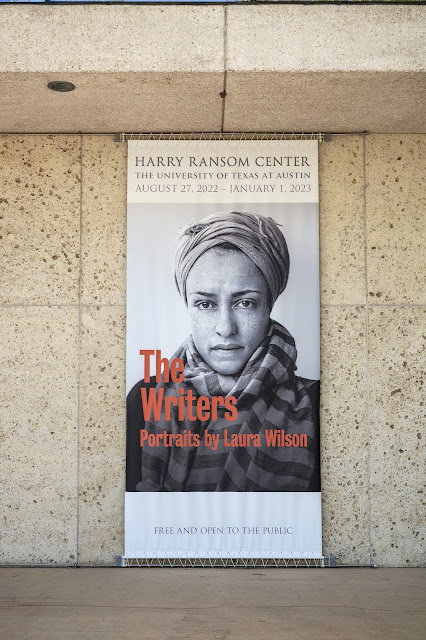 The HRC promotes their shows in part with these larger than life
posters. There are smaller posters hung on nightstands nearby as well.
The Humanities Research Center at the UT Austin campus has one of the largest collections of photography in the world. It houses the Magnum Photo print archive which my friend Will and I did a video about ten years ago. It's the location where I first met Elliott Erwitt and  then spent an afternoon with him in downtown Austin. It was my favorite place to take small groups of students to explore master works by 19th and 20th century photographers. On one visit there I ran into Arthur Meyerson. On another visit Magnum Photographer,  Eli Reed. Suffice it to say that it is, in some ways, ground zero for art photography in our city. The core of the collection was contributed by photo historian, Helmut Gernsheim: https://en.wikipedia.org/wiki/Helmut_Gernsheim
I hadn't been to the galleries in a while but I noticed in an email that the ground floor gallery (the big one) was going to have a showing of Laura Wilson's portrait of writers and I knew I had to see this. Laura Wilson first landed on my photography radar back when Richard Avedon was working on his grand opus, "In the American West." Laura Wilson had been hired to help produce the photographs. Not as in produce the actual prints but as in: figure out the locations with the most potential, arrange the endless road trip travel with Avedon and his assistants. Help pull people/strangers into the project as subjects and so much more. She also documented the project, photographically, over the course of six years and...if that wasn't enough....she also wrote the text for Avedon's resulting book. There is a book she wrote and photographed for about Avedon's process and journey west that is, in itself, a very interesting look at how art gets made. My copy or her book is dog-eared. Re-read at least a dozen times.  What I did not know at the time was how she was connected and that she was also a wonderful photographer in her own right.
Her specialty has always been portraiture. I was blown away when I looked at her bio here: https://en.wikipedia.org/wiki/Laura_Wilson_(photographer) Her book on the Hutterites of Montana was well received by the arts community and was probably one of the reasons she was hired for the Avedon project. But enough about Avedon. I'm here to praise Wilson's amazing work.
She's spent a large part of her career photographing internationally renown writers. Novelists, poets and playwrights. The work being shown at the HRC is all black and white (except for a small wall by way of a collage) and printed large....  and well. The space in the HRC is enormous and so each section of the show is well lit and well hung and viewers have ample space to step back and understand how expansive it is. When I walked into the gallery yesterday around 2 pm I was the only visitor. I had the whole show to myself. It was amazing and I felt privileged to see the work absolutely unencumbered by the presence of anyone else. Not even a guard or a docent.
Two interesting additions to the story. First, Wilson has some famous children. Luke, Owen and Andrew Wilson. Owen is one of my absolute favorite movie actors. He credits being constantly a subject for his mom's photography as a small child for his comfort now in front of movie cameras. ( loved him as "Hansel" in Ben Stiller's great movie: Zoolander).
A second addition to this story is a Six Degrees of Separation coincidence. I noticed on one of the placards next to an beautiful print of a Scottish writer Wilson mentioned that the writer cooked dinner for her and her photographic assistant. The assistant was a fellow named, Matt Lankes. He's a native Austinite and I have worked with him from time to time. He used to be one of the best of the best photo assistants before he moved on and became a very superb portrait photographer in his own right. He was the still photographer for Richard Linklater's movie, "Boyhood" and the stills from that movie are incredible.
Matt assisted me on the day I photographed former president, Bill Clinton for Dell, Inc. He's not only a great photographer but apparently an excellent soccer player as well. He reached out to let me know that he accompanied Laura Wilson on a large number of shoots the photos from which ended up in this show.
One can look at images on the web or in books but it is a completely different experience to see works printed exactly as the artist intended, in sizes big enough to make an impact and to allow deep exploration even by older audience members like me who need to look through the top part of my bifocals to see large prints in their entirety and then look through the bottoms of the glasses to see the detail. Yeah, I should try no line bifocals again.... sigh.
I suggest anyone interested in photography who lives within 100 miles of Austin to make a day trip of Laura Wilson's wonderful show. If you are flashy wealthy then by all means hop on that plane from wherever and comes see the show. It's pretty darn wonderful. 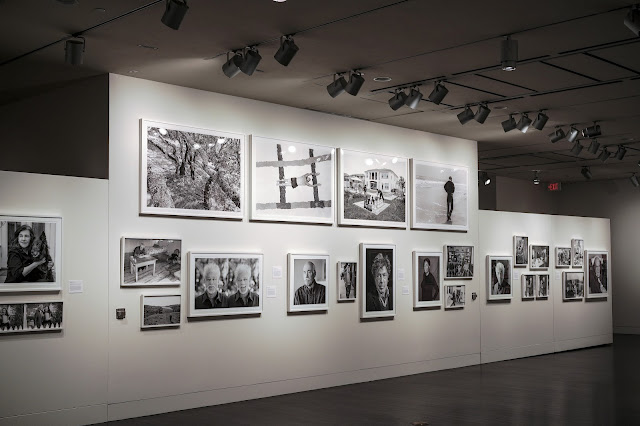 One of a half dozen long walls covered with portraits of writers. 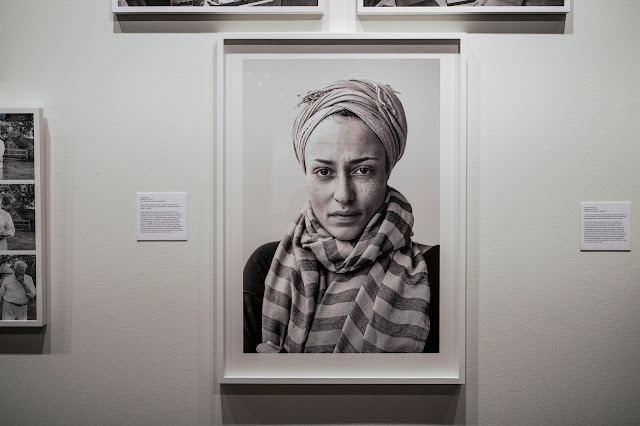 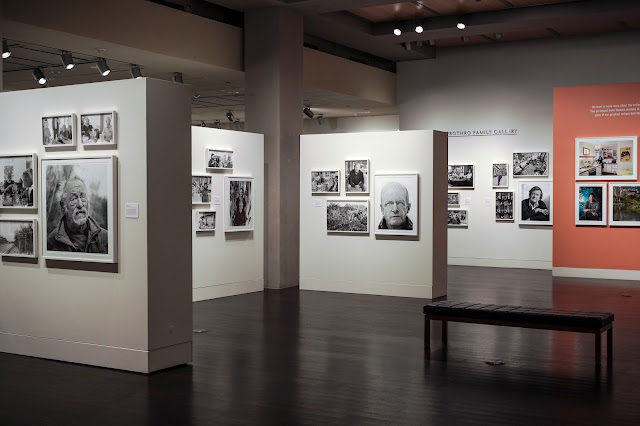 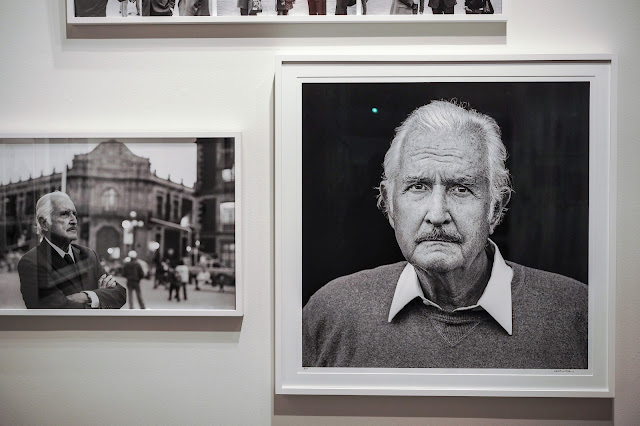 My favorites from the show are these images of Carlos Fuentes.
He is one of Mexico's greatest writers. I love that each artist is shown not only
in a formal portrait but also in his or her environment in a series of detail images.
The formal portrait of Fuentes is amazingly well done. (The little blue dot just
about his head in the forma portrait isn't part of the print; it's a reflection of a gallery light). 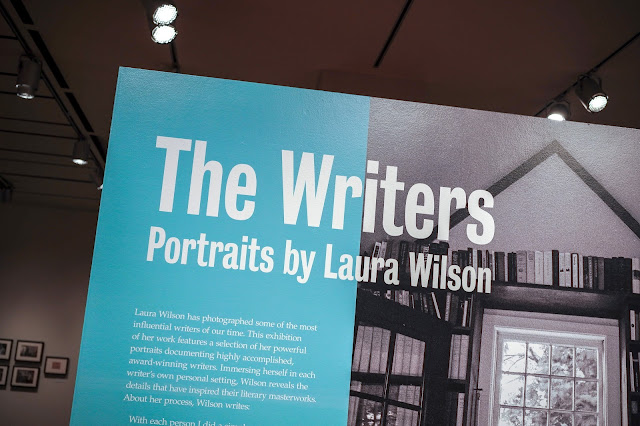 blog note:
I want to thank everyone for responding to my short, casual survey.
I love writing about photography. I just need to get better about ignoring
distractions and such. I'm certain I'm still having trouble dealing with the
trauma of the international pandemic which totally changed my art and business,
and now the Russian invasion of Ukraine.
Next week I'll get around to worrying about the stock market....
I ask for your patience. I've been afflicted throughout adulthood with
acute anxiety and all of its attendant issues; one of which is being too reactive
to criticism. I'm working on it. That's all I can promise.
Posted by Kirk, Photographer/Writer at 11:38 7 comments: