Video Shoot Prep. Checking each piece of equipment and also trying to anticipate what could go wrong. 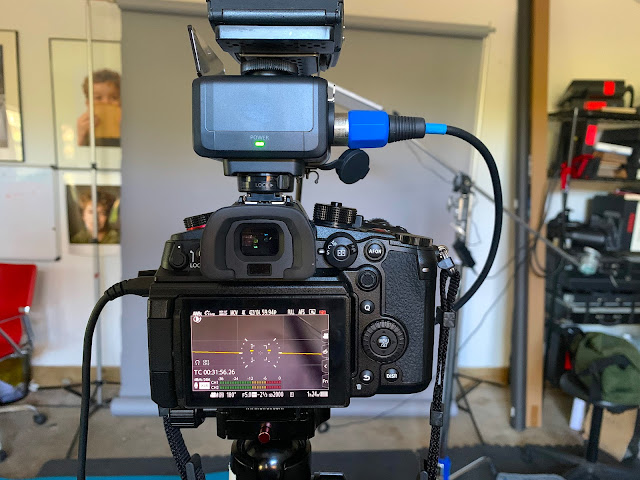 We're making video next week. We have one session that I'm worried about because I'm always worried about the sections of projects that have many moving parts. I think I've got the visual components well figured out for this two camera shoot but audio is always a weak spot for videographers. If something is going to head south on a shoot it's most likely to be audio. The roadblock of every production: audio issues. And you can multiply that by X2 if your audio system is based around wireless microphones. In fact, you can count on experiencing some glitch with wireless even if you've done this a thousand times before.

The job is not huge and the stakes are not high. If we screw up there is the opportunity to come back and try again but since we have a person who has agreed to be on camera, doing a testimonial, I think it's best to try not to depend on those sorts of fall back strategies. I'll try my best on any shoot to make sure we get it on the first try. Not necessarily the first take.

My basic routine, well in advance of the shoot day (because you never know when you might need to rush  an order for a replacement of something...) is to set up and check each piece of gear in the exact use it will get on the shoot. It's not enough to turn on a device and get a "welcome" screen. In my view you have to hook everything up and make test video. You have to see and hear that it will work. That it does work.

We'll be making video outside for the testimonial. The location is a walkway around a beautiful backyard swimming pool. If we had the perfect environment I would suspend a really nice hyper-cardioid (shotgun) microphone eighteen inches above the talent's head, pointed down at his mouth. But here's the deal; there is construction going on with some of the surrounding houses. It's a very affluent neighborhood and I think it's in the middle of that post pandemic re-modeling spurt. There's no way we're going to get multiple construction crews to stop working while we shoot so microphone choice becomes much more important.

In situations like this an omni-directional lavaliere microphone is a great choice. You can position one close to the person's mouth and then the inverse square law helps you out by dropping down the volume of background noise as it gets further and further away. Also, the talent's body acts as a barrier to noise coming from behind him while a shotgun microphone has different nodes of sensitivity and a less rapid fall off. Another plus in this situation is that most of my lavaliere microphones are designed to work with wireless systems which means less set clutter (wires, extra stands, etc.) when we are actually shooting.

With all this in mind, and knowing I wanted to use the Panasonic GH6 as my "A" camera I pulled out the Pelican case with the mixers, pre-amps and wireless microphone systems and grabbed my Sennheiser wireless set and its ME2 lav microphone. I always remove the batteries for storage so I pulled out the Ziplock bag with double A batteries and filled up the transmitter and receiver. I ran the output from the receiver into the XLR/Pre-amp adapter for the Panasonic GH cameras, set up the camera as I would for the shoot, put on headphones and fired everything up.

From the back of the camera I set appropriate levels and then walked around to the front of the camera to do some vocal mic tests. I quickly noticed that quick movements and certain positions for the transmitter caused loud, static encrusted "hits" so I started trouble shooting.

I pulled the transmitter cable out of the pre-amp/XLR adapter and plugged in a shotgun microphone. It worked perfectly and with no hits. That's what I expected from a hard-wired mic system. That ruled out everything from the XLR box thru the camera, including the headphones. Next I replaced the cable that goes from the radio receiver to the XLR adapter. Still had the hits when I powered back up.

I reached into the case and pulled out another lav mic and replaced the first one. Still problems. At that point I was starting to worry that I had something going wrong with the wireless components but decided to do a system re-sync. It's pretty easy to set a new frequency pair for both the transmitter and the receiver and... BINGO; problem solved. Something somewhere was interfering with the wireless transmissions in my environment.

I went through the same exercise with the back-up set of wireless gear and it was good to go as well.

While I want to use the wireless lavalieres I will also bring along a small collection of super-cardioid and hyper-cardioid mics that can be hardwired and boomed, just in case....  Because?  Gremlins. Better remember to pack fifty feet or so of XLR cables...

Next up I tested the GH6 set to 4K, 60p, 422, 10 bit with the profile set to V-Log and a monitor LUT applied. I shot footage outside, in a sunlit environment and with a one stop diffuser over head. I used the luminance spot meter in the camera to set exact exposure using a gray test target. Then I brought the "footage" back into the studio and opened it in Final Cut Pro X, applied the same LUT to the imported files and looked carefully at the waveforms and vector scope. All good.

Next step is to repeat all the steps with the B camera which will be the Panasonic GH5ii. When it tests out as well as the GH6 I'll breathe a sigh of relief and move on to testing my lighting.

We'll replace all the batteries with fresh stock the night before the shoot and say a little prayer to the photo gods.

But there are other steps to successful projects, regardless of size.

One week ago I met with the client at the shoot location to do an in-depth scouting and to identify all the potential B roll at the location. It took a couple hours but now we're on the same page when it comes to setting up the talent and getting shots to assist in and out of the primary shots.

Yesterday I met again with the client to go over content. It's not a scripted testimonial, per se, but I wanted to go over what answers we were looking for and how best to construct the questions to get the optimal answers. We spent several hours distilling down our talking points and the direction we need to give the client but I think that's time well spent if it reduces the amount of delay and backtracking it takes to do the actual interviews.

I'm sending the meeting notes to the client's assistant this morning for further feedback.

The final thing on my list of stuff I must do or must acquire before the shoot is to go to the camera store and buy two more 25 pound sand bags. One for every light stand or C-Stand on the set. Because you can never be too careful. Especially when working around a body of water.

If I have time this afternoon I'll test the audio with a Rode lav mic, the Sennheisers and also several microphones from a Saramonic system. I'll let my ears decide which one I like best and that's the one we'll use. There's always one more thing to do before every video production. Not doing it just makes more headaches for me down the road.

Posted by Kirk, Photographer/Writer at 11:44 4 comments: