The passage of time. 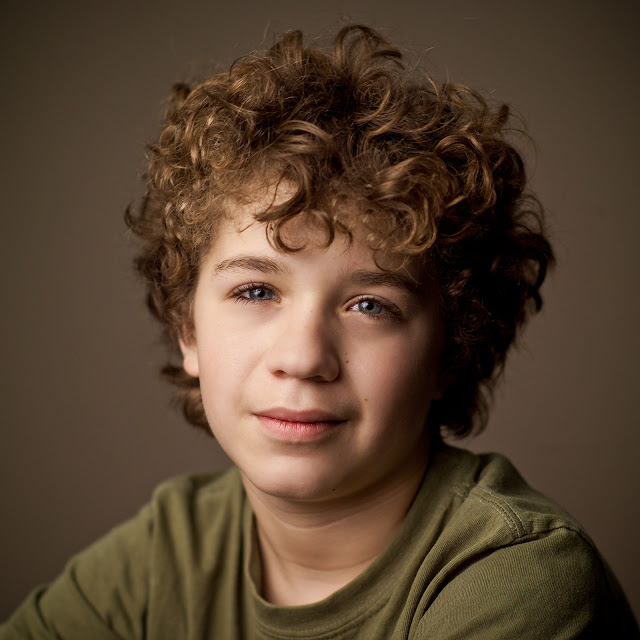 Ben.  Shot two years ago with a Kodak DCS SLR/n and a 105mm 2.5 lens.  Tungsten lights.  Big ass diffuser.  One little tungsten light on the background.


So this is the way Ben looked two years ago.  He looks nothing like this now.  Now he's a teenager.  Now his hair is darker.  Now he has a little mustache across his upper lip.  Now he looks more insouciant. More adult.  More teenager-y.

This is the anthropological record of Ben from a time when he was just on the edge of the absolutely cute mode to me and his mom.  I remember why I took this photograph.  I was going to do a portrait of a corporate CEO about six hours later and I wanted to test my lighting.  Owned a Nikon D2x at the time but I thought I liked the way the Kodak system rendered flesh tone and contrast on skin much better.  I wanted to make sure because real money was on the line.  I'd like to say that my brilliant and gifted child was sitting in an upholstered armchair in the library of our home, reading "War and Peace" but if you had a twelve year old you probably know chances are he was playing a video game.  And if you know many working photographers you probably know we didn't have a "library" and he was probably strewn over the 22 year old, recovered sofa.

At any rate, I dragged him out to the studio and had him sit in so I could shoot some frames, drag them into PhotoShop and have a look.  Utilitarian photography.  No goal photography.  Test images only.  And then my mom saw these photos of her grandson and all hell broke loose. (How do I tell John Harrington that I pretty much have to give my mom and dad free images of the grandkids or they'll trot out that whole, "We put you thru six years at the university and now we have to pay you too!!???")  I snuck the image into a portfolio and found that it resonated beyond the family.

But the bottom line is that this image defines, for me, Ben in transition from childhood to adolescence.  And it's really been a graceful transition---much to his credit.

On a more prosaic level this image (as a successful test) was the impetus for many other continuous light portraits;  many of which helped pay the mortgage and put food on the table.

I have a 20 by 20 inch print of this in the house and an 8 by 8 inch on the wall in front of my desk.  When all of Ben's friends descend, like locusts, on the house, eat everything in the pantry and agitate my dog I look at this photo and think that it's all worth it.

I guess that's one of the real reasons we do photography.....so we can look back and see how good we really had it.
Posted by Kirk Tuck, Photographer/Writer at 20:39 4 comments: