Where does style come from? How do I get some? 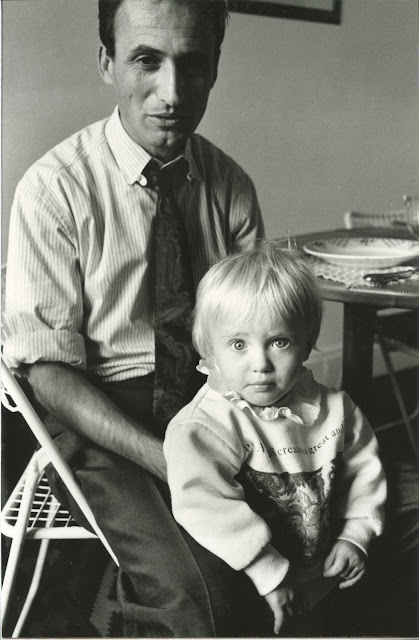 There's two ways to look at style. One is tied to the idea of fashion and what is fashionable.  This idea rewards constant changes of approach in order to incorporate the lighting of the day, the subject matter of the moment and the presentation of the minute.  Just last year many photographers rushed to make images that made liberal use of the "clarity" slider in PhotoShop, along with multiple backlights and a healthy dose of dynamic range manipulation via the shadow and highlight sliders that showed up, en masse, in most image processing programs.

The other way to look at style is to perceive it as the leitmotif of the long term arc of an artist.  How do they routinely like to approach and display subjects.  And what are the pervasive consistencies over time.  We like artists who can innovate while staying true to their basic nature.  That's what makes them powerful.

In time, given the number of monkeys typing and the vast spending power of the marketplace, people in the first camp will, within weeks of the birth of a new style, be able to buy a canned filter set that will allow them to make work that superficially looks like the work of the latest "wunderkind". (When did we go German?????).  Take a shot, dump it in PS, hit the art filter button and sit back while the little magic squirrels on the wheels take control and make your work look like everyone else's.  Indeed, we can see this all over the share sites right now.  And there's a huge number of self-promotion videos in which today's acknowledged instant photo celebrities show you have to look like them...

It's not so easy in the second camp.  It requires shooting and shooting and looking and shooting.  And watching the natural evolution of a style that is demonstrably both yours and long term at the same time.  And it may be nothing like what you expected when you started.  There is value to playing scales and learning method but it's all just filling time if all you ever do is sit around playing the opening measures of "Stairway to Heaven" for the rest of your life.

Nabokov became rich and well known by writing like Nabokov.  None of the rest of a generation of Nabokov imitators made it out of the gates.  The style that counts is the style that comes over years and decades, not the one you can get out of can.

I'm still working on mine.  But it's one of those miserable Zen things.  If you focus on style it eludes you.  It only works when you forget to work on style and just respond to the things you attract to the front of your camera......
Posted by Kirk Tuck, Photographer/Writer at 15:05

Kirk wrote: "If you focus on style it eludes you. It only works when you forget to work on style and just respond to the things you attract to the front of your camera......"

So true. After 42 years of doing this, if I don't have a style, I ain't never gonna have one. But I would rework your last line just slightly to read "...the things in front of your camera that attract you..."

Dave, Thanks. But I think I got that last line juuuuust right.

Right for your style, but maybe not for mine. :-)

I understand what Dave said but I think that Kirk's prose and meaning is better. Sadly, it eludes me but it is good to have a goal.

Glad you posted this, I had written a long reply about my anger with all this nonsense on hip photo blogs, but you basically said everything in your post, so I'm just going to nod my head in agreement and keep on messing around and try to find what makes ME happy.

I used an analogy to music but in some ways I think an analogy to cooking is more appropriate. All the trendy cooking stuff, food with vertical height, nouvelle cuisine, pineapple on pizza, raspberry vinaigrette all fall by the wayside and the basics remain and are built upon. And great chefs become great thru constant practice and experience.

Have you read "The Art Spirt", by Robert Henri? Henri was a painter and instructor with a great following who passed away in 1929. The book was compiled by the author from fragments of Henri's writings, compositions and instructive narritives. While his art instruction involved painting, his teachings are very relevant to photography. I am an amateur painter and photographer, still shooting mostly film. I have read this book many times over the years to rekindle and stimulate my art.

Very like and agree with your saying of " It only works when you forget to work on style and just respond to the things you attract to the front of your camera."

I don't think style is something you look for, or work on, or force. I think it is something that we have inside us, but have to unblock to let it flow.

Many photographers treat style as something that is external... like a 'look' or a 'presentation' type.

That is not style, it is a look or a presentation type. And if one bases one's style on what the shot looks like, then anyone with a few bucks for a photoshop action can make that look. And then it isn't style at all, it is simply the result of pixel pushing.

Style engages at a much deeper level. That is why I say it is something that most of us block instead of letting it flow.

Oh, there can be as many different reasons for being blocked as there are photographers... but finding the way to letting the style be engaged involves a hell of a lot of shooting, the ability to start to recognize something within your work and the courage to let that 'something' take over.

Even if it is unpopular on Fred Miranda.

Even if your mom doesn't like it... if it is you, and you feel strongly about it, it can become your vision and style.

Working that style and vision into a working scenario makes the next challenge. One we all have to deal with.

As to whether Kirk has style, I think he has it in huge amounts. Looking at his work shows an integrity in vision and style that is, I think, refreshing.

Of course, he could download Topaz Adjust and make some killer stuff that would get a bunch of comments at Flickr... but that, ahem, is not his style.

Both you and Ken Rockwell hit this topic similarly but from different angles, and within a day or two of each other. Funny!

Style is perhaps the thing I struggle with the most and it goes well beyond any technical issues. I love this quote from KR "Style isn't simply being different. Different is different from being unique. Look at all the people with tattoos, all trying to look different, but they all wind up looking the same."

When I add contacts on Flickr these days I'm generally looking for people who view things very differently than I'm used to seeing them. It helps me break out of my self imposed creative restraints. I think a lot of us wannabe photographers (not saying this is a bad thing to be by the way) suffer from Facebook "like" syndrome, or live too much for Flickr comments. The tail often wags the dog.

If all we want is for public affirmation of our photography then we also need to consider whether we want to be the equivalent of a pet rock or velvet Elvis painting. They sold a lot but ugh!

It's been beaten to death over the years since it became public knowledge that HCB's favorite little book, Zen in the Art of Archery, lead him down his path of life and photography, but it is an excellent read, regardless of your "art". And yes, it is full of those miserable zen things, which can take a lot of cogitating (sometimes a lifetime!) before they make sense.

Excellent post, and one of the reasons why your blog is fast becoming the only one I read any more!