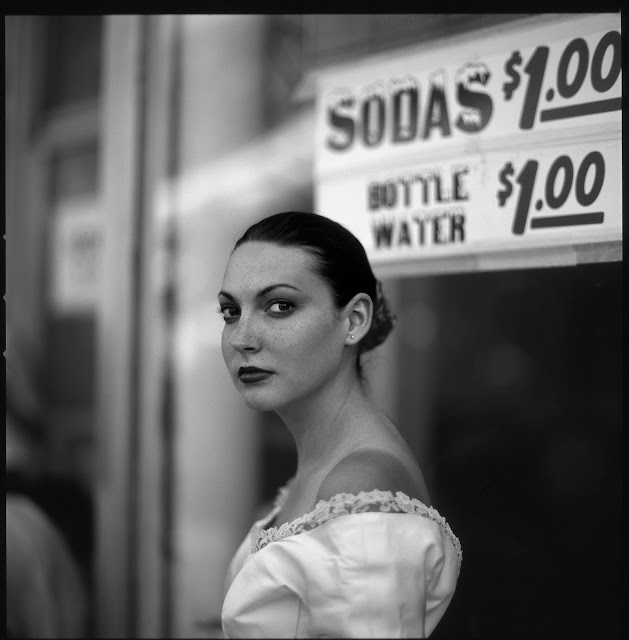 Renae on Commerce St. in San Antonio with a wedding dress and tanned shoulders.
I blame Robert Frank and Richard Avedon equally for my love of street photography.  While the Robert Frank reference is obvious to anyone who's looked through a copy of "The Americans"

I'm sure people unfamiliar with the breadth and depth of Avedon's career are probably scratching their heads.  Rush out to a well stocked book store and browse through a copy of Richard Avedon, " An Autobiography"

and you'll be surprised to find a bunch of wonderful street photos from New York, Paris and Rome.  Were they all staged?  Probably, but I don't find them any less powerful.  Part of the power in the work of both artists no doubt comes from their conversant ease with graphic black and white.  They were working directly in the process rather than trying to divine how to shoot in RGB and then make the right gyrations to unlock their vision, after the fact.
Both Avedon and Frank were masters of seeing and capturing gesture.  And gesture is one of the unsung foundations of a great portrait.
So, after sitting around brainwashing myself with my book collection I called my friend and transcendent muse, Renae and suggested a street shooting foray in one of our favorite (financially) accessible cities, San Antonio.  She mentioned that she had a wedding dress we could use as a prop and we were off.
As you've probably come to expect by now, we didn't do anything by the numbers.  Instead of a box full of gear I dragged out a Hasselblad 2003 FCW and an 80mm lens.  Instead of our typical Provia

,  I threw ten rolls of Agfa Scala film in the bag.  Sink or swim.  All my stories seem to have the line....."It was a hot, Texas day...." and this one is no different.  By the time we banged thru the ten rolls we were shot and heading toward the bar at the Havanna Hotel.
For people who never had the privilege and pleasure of shooting film I guess I should explain Agfa Scala.  It was a black and white transparency film.  No chance at redemption if you weren't able to hit the exposure.  And it was a latitude cheapskate.  Half a stop over and you were in white territory.  One stop under and you lost your lower mid-tones in a sea of black.  Once you shot it you had to send it off in pre-paid mailers so you didn't know if you were a chump or a hero for about ten days.  I'm always optimistic on the front end and pessimistic on the back end.  Love it while I'm shooting and critical when I see the mess I've made.
But the whole exercise was more for fun than anything else.  I figure if photography is so fun that it's the world's biggest hobby I should consider my life one perpetual "Magic Kingdom" of fun.  So we shot and settled for what we got.  Even the stuff that was blurred by subject motion or photographer inattention.  Like the one below.... 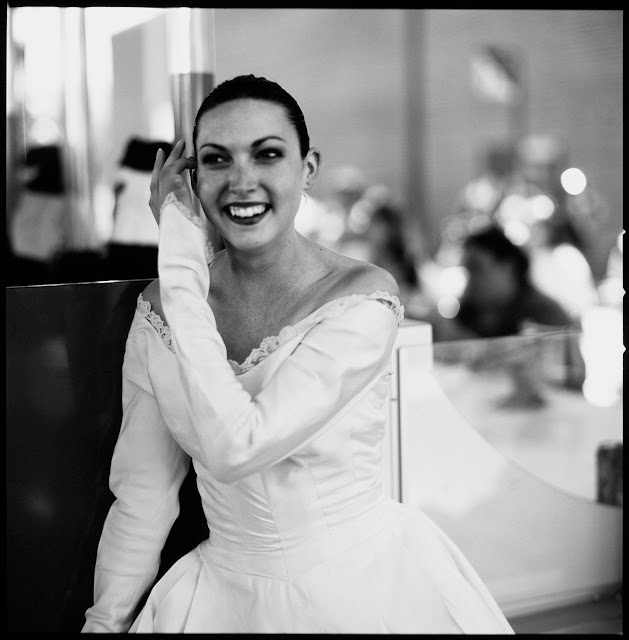 note:  After I started writing this I went into the house from the studio (fourteen steps....) and grabbed the Avedon book off the shelf to make sure I had the title right.  I plugged it in and checked out the Amazon.com link for the book.  OMG!!! The first (and only?) edition of this book is going for a lusty $500+ dollars.   Very good condition used copies are around $350.  Amazing.

But I guess I shouldn't be too surprised as the first edition of "The Americans",  inscribed by Robert Frank, is going in the neighborhood of $16,000.


I better stock up on some more first edition, Minimalist Lighting (location)

books before they run out.  I'd hate to be an author who couldn't afford his own first and second books..........

I have one Summer reading suggestion to all you readers who like historical fiction.  If you haven't read Stephen Pressfield's, "The Gates of Fire

"  you should.  It's a brilliant version of the Greek battle at Thermopylae against the Persians.  I've re-read it three or four times and I'm always sucked into it.  You've probably read my recommendation of his smaller but no less brilliant non-fiction book,  "The War of Art"

which I believe should be on every artist's night stand or bookshelf.  It'll save your artistic life......

Hope you're having fun.  People will want to know what you did over the Summer......
Posted by Kirk, Photographer/Writer at 18:13 5 comments: