A quick review of three new tools I love. 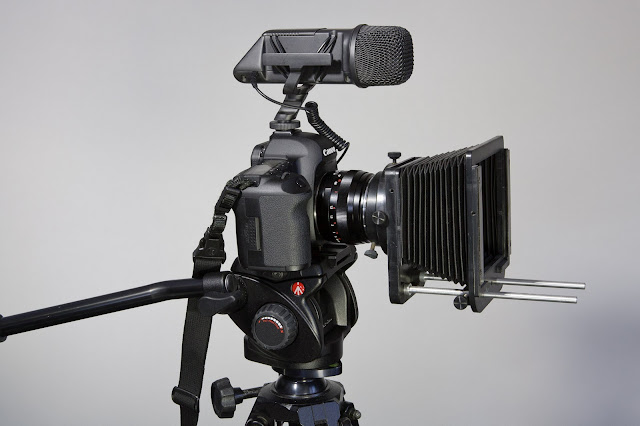 I love to mix it up around here.  I write copy,  I write blogs and I write scripts.  I shoot film, I shoot digital and I shoot video.  If I did the same thing every day, all day long, I might be damn good at it but I might be damn bored and damn boring.  We're humans.  We were made to roam.  To hunt and gather.  To invent and to constantly change gears.  Not to sit in front of the same electronic fire pit for eight or nine hours a day, watching the same lights flicker over and over again.

So, lately I've been more and more fascinated by video (or, for you elitists out there, "Motion").  And when you tumble into a new media you go thru the process of learning which tools work for you.  My current favorite video shooting DSLR is, without a doubt, the Canon 60D

.  It's set up for video.  The audio set up is good, the noise performance is good and it's stingy with energy use.  The camera above is a Canon 5Dmk2

and it's the best portrait camera I've used.  And if you want out of focus backgrounds it rocks for that, too.  But when you need more than one thing to be in focus (90% of the time for me...) the extra DOF of the smaller sensor in the 60D actually works in your favor.  But this isn't a camera review.

The three things I want to quasi-review today are the Rode Stereo Mic,

s and the Manfrotto 501 HDV

.  It works great for natural sound when you put it on top of the camera.  I used it, with the supplied windscreen, all afternoon in 20 to 30 mph wind gusts on Saturday on the end of a pole, close to our subjects, and we were able to get damn good sound.  Better than I would have thought possible.  When we used it in the quiet studio it's final output (what we heard in FCP) was very detailed and neutral.  The secret I've learned is to always be very close to the subject you're miking.  Like 12 inches away if you can swing it.  A boom pole is a necessity for any sort of real sound in your production.  That means that your video crew will usually have two people, minimum.  I'd buy another Rode Stereo Mic

in a heartbeat.  I never worry about its performance and that leaves me mindspace to worry about other stuff.

I use the 50mm Carl Zeiss ZE

lens when I want to be fairly close in to an interview subject but without any distortion of the subject's features.  I use the lens right at f2.8 which is the extreme sweet spot for this lens.  When I'm working inside of five feet the background goes mellow and out of focus but the sharpness on the subject is great.  I also love that it's not to crunchy but very detailed.  If I stop down to f4 the lens is almost too sharp for some subjects......  I bought mine to use on the 5Dmk2 but if I'm in the video mode it rarely comes off the 60D.... I liked this lens so much I went back and bought the 35mm f2

.  They are that good.  Not good in the hands of a beginner acculturated solely to AF, but great if you are comfortable hitting manual focus.  S screens for everyone!

fluid head for my video tripod.  This thing is big, heavy and works well.  I've used heads that are three and four times the price and they were great.  About 5 to 10% better than the Manfrotto.  But the Manfrotto is all I need right now.  When my hand skills and technique hit a wall with the 501 I'll look for something better but that might take a few years.  It's got a spring counterforce setting that compensates for the mass of a 5 pound camera set up (just about right for DSLR and lens....)  lots of adjustments and, most importantly, it stops and starts smoothly.  Every movement is adjustable.  For $189 it's an incredible value.

Ben used the head this weekend for a class project and he was amazed at what a difference the right tools made.  None of these are "break the bank" accessories and I bought them after struggling with other, less expensive options.  I have a project that starts next week that requires good techniques and good tools.  The cost of the three products = a day's fee.  If they make my work easier and better they're worth their weight in my camera bag.

Next week is SXSW.  I have to stay in town to work on a video project but I can guarantee that I'll be downtown a lot shooting the madness.  If you're coming to Austin shoot me an e-mail and we'll see about setting up a happy hour.
Posted by Kirk Tuck, Photographer/Writer at 12:51 3 comments: