Ginger Rogers had to do everything Fred Astaire did only backwards and in heels..... 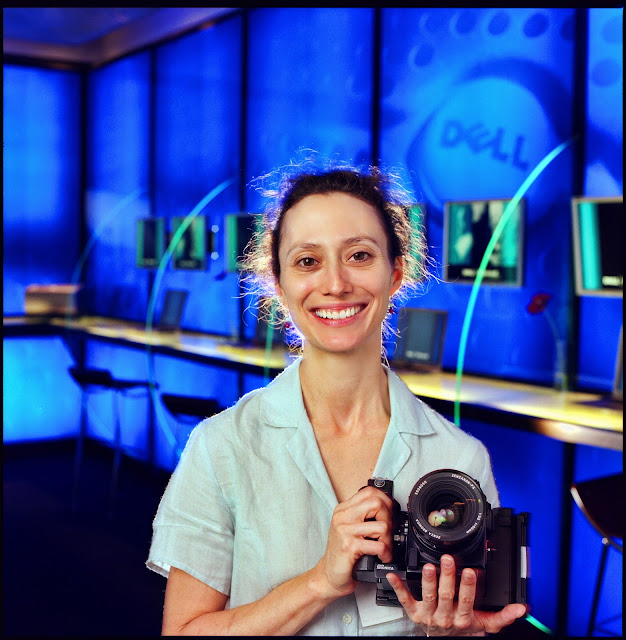 I laugh and shake my head when I hear about photographers who can't function without "fast" autofocus, total exposure automation and instant chimp-o-metric confirmation at all times.  It's painful to hear about professionals who can't cope with composition if they don't have a zoom lens on the front of their camera. I laugh derisively at people who think modern day "flash-ists"  invented basic techniques like balancing flash with ambient exposure or using back light.  And I especially "thumb my nose" at photographers who feel the need to travel with a big, pouty, noisy entourage.  Who the hell needs all those people around them these days?

I'm shooting some people in my studio tomorrow and I generally use that as an excuse to do some major cleaning up.  I've wiped away the stacks of stands and piles of power packs that were brought home and tossed into the corner after last week's long flurry of location photography.  I was going through a filing cabinet drawing, tossing out mementos of yesteryear in order to make room for future junk when I came across a contact sheet and a page of negatives.  Big, juicy, medium format color negatives.  ISO 100 Fuji Reala negatives, to be exact.  I remembered this shoot with my assistant, Anne.  We were setting up to do shots of Dell executives in various locations around their beautiful executive briefing center.

So I thought I'd pop a negative in the desktop scanner and see what it all looked like back then.  This was old school photography all the way.  Our assignment was to find five or six fun locations and then guide our executive thru each location in order to build a catalog of public relations shots the company could use for the next two years.  Anne was standing in for a test shot.  She's holding our medium format camera with a Polaroid test back on it.

Anne and I met at the studio in the dark part of the morning  to pack and get on the road to Round Rock.  That's where Dell's main offices are.  We carried along a Bronica SQai System which was a fun and inexpensive (by comparative standards) knock off of the venerable Hasselblad 500 series.  The system entailed three bodies,  waist level finders and hoods,  lenses from 50mm to 200mm, and eight 120 film backs.  We also carried a Polaroid back and a couple boxes of 100 ISO speed, black and white test film.  We used black and white for several reasons:  1.  It was a better match, tonally and exposure wise with the Fuji Reala film than was the color-roid.  2.  It was quicker to process.  Ready in 30 seconds under most temperatures.  3. It didn't generate discussions with clients about color.  Many a working photographer will tell you stories of hours spent fine tuning the color on the Polaroid tests they were shooting, in order to please the client, only to have the color be nowhere close on the film.  We pretty much knew what we were doing back then with light meters and such so the color part of the Polaroid wasn't very necessary.  Why open up a big can of worms if you don't need to?

We packed three or four Profoto monolights, with (OMG) optical slaves, and an equal number of stands and reflectors.  We also packed large and small soft boxes, some flags to flag off spill and a bunch of odds and ends.  In fact, we took everything we thought we might need if it would fit on our cart.  And a lot of stuff did.

Our basic modus operandi was to walk through the entire location first and make little sketches in a notebook about which sites and which angles we thought would work best.  Then we returned to site one and started setting up.  First thing is to find your angle and establish the subject/background relationship you want.  More important than anything else.  Once we had the lens, distance from camera to subject and subject to background figured out we'd start to light.  My first step is to light the background or, in the case of the image above, to see how we'd use the cool light already existing in the scene.  I metered the background and established a base exposure for that.  From memory I'd say we were looking at f8 at around 1/15th of a second with the ISO 100 film.  Next step is to figure out how to light the subject.  We went with a small (32 inch) umbrella with a black backing used to right of our subject.  A white reflector, used close in, provides fill from the other side.  Our final light is a small flash ( probably a Metz ) dialed way down and used on a stand right behind Anne's head.  Only when we had moved all of the lighting components into place and had metered them with an incident light meter did we pop our first Polaroid.  Why not pop one at every step?  Easy, they cost about $2.50 each to shoot at the time and I'd rather do the technical stuff with a bit a of rigor and pocket the money we'd waste on iterative and unnecessary tests.

At this point we'd bring the client into the mix (they generally sat in one of the conference rooms during our quick set ups and caught up on work...), snap one more Polaroid and then work through two whole rolls of film.  A whopping 24 frames.  Sometimes, when we were running low on film we'd call it a wrap in twelve shots.  Confidence in your own technique was a requirement back then.  There weren't many other alternatives.

Once we got what we needed we'd talk to the client about how long it would take to do the next set up and where we would rendezvous.  Then Anne and I would label the film from the location, bag it with the relevant polaroids and move on.  At the end of the shoot we'd divide the film up into two batches.  One roll from each set up.  Then we'd have the lab run one batch, and then the other.  This was like cheap insurance that let us know we'd know that, even in the face of abject lab failure, we'd have one roll of images to fall back on.  For the most part the labs never failed (except on one of my biggest assignments on 4x5 sheet film for IBM.....but that's another story...).

The role of the assistant on shoots like this was more involved than it is today.  They'd be responsible for labeling and keeping track of the film.  They'd pack it, load it, unload it, label it, bag it and keep track of it at all times.  We trusted our meters back then and the assistant had a meter as well as the photographer.  I could stand at camera position, pop a light, and depend on my assist to meter the pop from the right position, holding the meter in the right spot and then jotting down the readings in a little notebook in case we changed cameras and lenses and needed to go back to our reference exposure.

On shoots where we shot lots of images loading film backs on demand, always correctly, was a skill in demand.  When we got back home we'd unpack and the assistant would take the two batches of film to the lab and give them any necessary instructions.

I use assistants far less often for interior shoots these days.  And usually it's in the capacity of setting up and tearing down lights.  There's very little else productive for them to do while we're shooting.  My current assistant sometimes operates more as a producer, lining up models, getting props and figuring out logistics.  As we relentlessly downsize both the type and quantity of gear (and the budgets) the rationale for using assistants on a frequent basis also shrinks.  On outdoor shoots you need a good assistant (if you are lighting) to keep the light stands up in the wind and to carry the sandbags to the location from the car.  It's also good to have an extra set of eyes on the gear when out with the public....

Well, that's all I really had to say.  I was just struck, when I saw these photos, with the memory of how much work and skill it used to take to do a shoot versus what is required now.  I recently did a hospital shoot and mostly used a Canon 5Dmk2.  Our most rigorous lighting challenges were easily handled by a clean ISO 800 or 1600 and a little foundational supplementation with a small, TTL cabled flash.  Our value add had nothing to do with technical stuff and everything to do with directing and building quick and effective rapport.  That and seeing the right angles, composition and gesture.

When people talk about the challenges of photography today, as they relate to technique, I just roll my eyes and think of the quote about Ginger Rogers.  That's probably why so many older photographers are a bit resentful about having learned so much good stuff in their careers. Stuff that is being tossed by the wayside.  We'd like to be able to show off just how elegantly we could dance backwards with a view camera......
Posted by Kirk, Photographer/Writer at 15:50 15 comments: