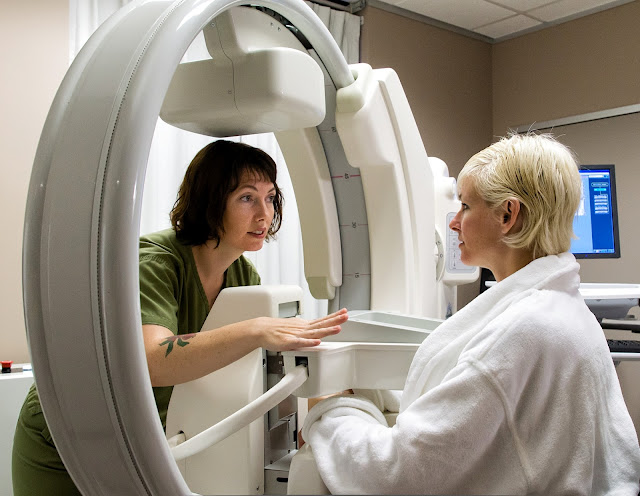 I don't know what you do for a living but my job is different every time I leave the studio. A few months ago we did a job for a medical imaging practice here in Austin. Like most of my jobs it was fun, it moved fast and I learned lots of new things about other people's jobs.  Our project was to go to several clinics and photograph the staff and "patients" (model released employees of the practice) doing their jobs, making scans, making patients feel comfortable and mixing science with a human touch.

At the time my cameras were relatively new to me and this was a good job in which to push the limits of mixing available light with gentle boosts from small, battery powered LED panels.  I shot the job above with a Sony a77 camera and the 16-50mm lens.  The lens is the finest 24-75mm equivalent lens I've ever used.  In the center area it is very sharp even at its maximum aperture.  The Sony a77 gets a few knocks from every reviewer for what we perceive to be too much noise at ISO's from 800 and up.  And I'll admit that when I first started using the cameras, especially for low light theater work, the files did seem plagued with noise.  Nothing like the noise in previous generations of digital cameras but again, nothing like the clean files in cameras like the Nikon D3 and the Canon 5D either.

Before the job started I took a day to shoot some tests at 800, 1600 and 3200.  I took the files into Lightroom 4.x and started playing around with exposure, noise reduction and sharpening and I was able to make a start on fine tuning my approach to shooting at higher ISO's with these cameras.

My first exercise was to think rationally about what the files would actually be used for and then see how they looked in that application instead of just opening the files up at 100% on a big monitor and obsessing about the "grain."  The file above is about 900 pixels wide.  If you click on the image a couple times you'll see it at 2,000 pixels. In either of these sizes the noise issue is immaterial to me.  If you blow the file up you'll see more noise but you'll be looking at an enormous image. Not something most of my clients need for websites, small "rack" brochures and as 8.5 by 11 inch magazine ad issues.

When I dug into the files I discovered something else.  If the files are exposed to the right of the histogram (the files look bright but not blown...) the noise drops way down. The brighter the exposure in the camera the lower the noise levels in post processing. Given that the a77 has one of the widest dynamic ranges (in the top ten at DXO) and a longer characteristic curve in the highlights than many competitors I am able to pull good, solid highlight color detail out of files that appear to be blown out in the EVF or the camera histogram.  I fear over-exposure less with this camera than I did with previous generations of cameras I have owned.  And that makes this a bit more like what we used to do in the film/darkroom paradigm.  With Tri-X we'd routinely rate the film (expose the film) at ISO 200 or 250 and then compensate in the development in order to match the tones we wanted to see in a print.

With good technique I can use ISO 800 with the Sony a77 and have a nice file that response well to nuanced noise reduction without throwing away too much sharpness.

But there's more. I've learned to handle shooting my files the same way we did when we used to shoot with transparency film. I've learned that I can't just let the shadows fall wherever they want to fall and then depend on the shadow recovery slider in Lightroom or PhotoShop to save my ass. When a shadow is too dark and I know it needs to be open, even by only half a stop or three quarters of a stop I grab a light or a reflector and I fill it.  Limiting the range of light values ensures that I'll be able to get a usable file with much less noise in the shadows.  No matter what camera you're shooting boosting the shadows, either in post or in camera with something like a DRO setting, adds noise and decreases the appearance of delineated detail in lifted shadow areas.  Even the new miracle cameras (see: Nikon D800, Canon 5Dmk3 and Olympus OMD EM5) will give you cleaner and more open shadows with less noise if you take the time to toss in a fill reflector or a light to bring up the levels of the shadows.  Just because you can fix most of it in post doesn't mean you should.

When I can depend on a light source to help me boost exposures in the shadow areas I can dependably get clean a77 files at 1600 ISO as well. The handiest light I own, the one that's far easier to use than flash, is the Fotodiox 312AS LED panel.  These are small and light, put out ample light for low light available light situations and they have the added benefit of continuously changeable color temperature between 3200 and 5600K.  They also have a continuously variable power control.  With two camcorder batteries attached I can use the panel for nearly two hours of continuous run time.  If I'm careful to turn off the lights as soon as we get the shot I can use them for a full day when making images like the one above.  At 1/3 the cost of a single SB-XXX flash from Nikon or similar flash from Canon I think these lights are "no-brainers."  And since they are battery powered there's no scramble to run cables or find working outlets.

In the image above I was crouched into a corner to shoot. The camera was set at ISO 800 and the room was mostly lit by two overhead florescent fixtures.  The part of the measuring machine closest to me, the big, white ring, was in shadow and I knew it would either go too dark or I'd be forced to bring up the exposure on the part in post by nearly a stop and a half, which would add a lot of noise to the newly opened shadow area.  And the correction would also shift the higher tones. There's no free lunch.

I added one of the LED panels to my left.  There wasn't room for a lightstand so I balance the panel on the edge of a shelf. Using the permanent live view on the camera and looking through the EVF I fine-tuned the color temperature control until any sort of color cast difference between the room lighting and the LED light vanished.  Then I used the "volume" control to get the exact amount of fill that would be needed to lift the shadows without adding a second shadow anywhere obvious.

I also wanted to lift the value of the light on the face of the technician in the green suit so I put a second LED light just to the far side of the "patient" and just out of frame.  I "gobo'ed" that light with some black wrap (thick, black aluminum foil) so I didn't get too much spill on the rest of the scene.  That gave me light on the tech's face without messing up the nice series of contrasts through the rest of the image.

It took far less time to set this up than to write about it.  But essentially what I'm trying to say in all this is that good technique can be critical, even in the times of endless post processing, to make an image sing in just the way it needs to.  Taking time to add light instead of depending on lifting the shadows in software is an example.  We've done shoots light this for decades and have always depended on the ability to light in order to control the nuances of shadow and highlights.

Just because we've popularized microwave cooking doesn't mean that there's no place left for the sauté pans or the oven. Lighting to taste.  Season to taste.

I used the cameras at the opposite end of their ISO range this morning. Beautiful portraits in a conference room with a perfectly exposed exterior of trees and greenery.  ISO 50 is gorgeous.

Posted by Kirk, Photographer/Writer at 12:01 7 comments: