A long day in the trenches of photography. Food and drinks. 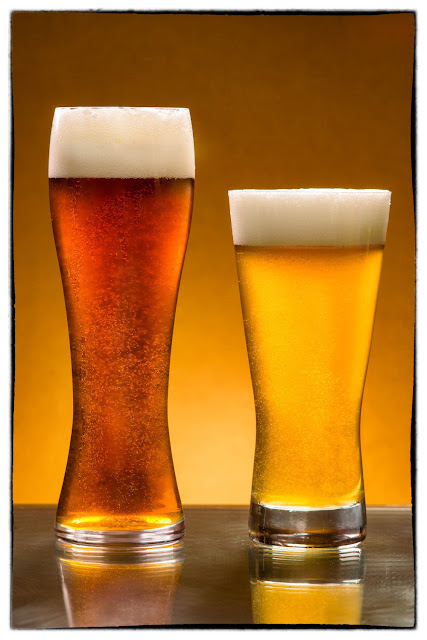 I spent my day today shooting food and beverages for Hilton Hotels. The shot above was one of the last shots of the day. I backlit the beer glasses with medium size softboxes, put a diffused and warm filtered light low and aimed at the backwall, as a background light and had my assistant hold a while card above and in front of the beers to put some light into the head. I'll lighten the heads and whiten them in our final retouch.

For the majority of the day's shooting I used Elinchrom D-Lite 400IT monolights aimed through large diffusers.  For the drinks I used the backlighting described above. I used a Sony a77 camera set to RAW and, after some experimentation, came to rely on the good performance of the 85mm 2.8 Sony DT lens.

I am happy with the Sony a77 with one exception: While the sensor cleaning works perfectly (vibrates at shut down) nothing is ever cleaning off the fixed mirror.  When I shot at f11 I found two big dust spots and was unable to dislodge them from the mirror with puffs of air. I'm taking Sony at their word that we shouldn't use anything to physically touch the mirror surface. But it will bite if I can figure out a way to clean dust spots off, short of sending the bodies back to Sony for periodic cleaning.

The Nex 7 is superior in this regard.

We shot a ton of stuff today. I've downloaded my SD cards and backed up the files and I'm pretty wiped out. Been up swimming and packing since 6 am. I need to hit the pillow so I can get up tomorrow and do it all over again.

Nice to have an "old school" controlled lighting, equipment rich assignment.  We filled up the element with lights, stands, modifiers, steamers and all sorts of food photography paraphernalia. Right down to my favorite set of chop sticks for poking and prodding stuff into position. Clients are still grateful that the knowledge and application of deliberate lighting still exists.

Posted by Kirk, Photographer/Writer at 22:51 11 comments: