I took a chance and cleaned the mirror on my Sony a77. 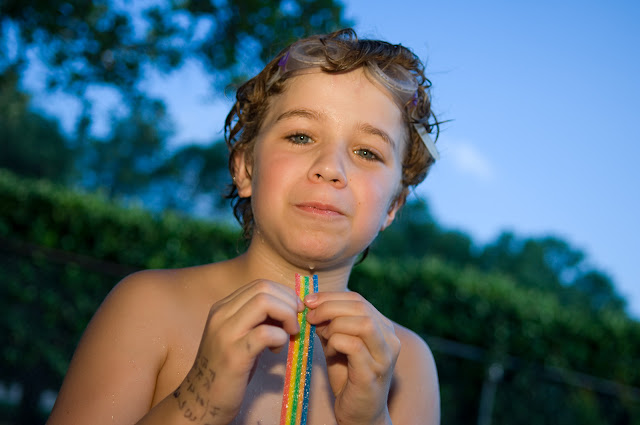 This photo has nothing to do with this particular blog post. I shot it to illustrate something for the first book I wrote and I liked it. I think I shot it with a Canon G10 and a Canon flash on a cable.

I saw some dust spots on some of the photos I took for my client yesterday so I took a loupe and went looking for dust on the mirror and sensor of my Sony a77.  I didn't find any on the sensor but I did see five or six bits of intractable dust on the front surface of the mirror. I grabbed some Windex and an old toothbrush and..... NO WAIT! I grabbed a can of compressed air and a Sensor Brush (and followed the instructions sent by a reader of the blog).  I blew the brush with the compressed air to remove dust on both sides.  Apparently this also imparts a positive charge to the bristles that helps lift dust off. I did a wipe from top to bottom on one side (left/right, not back/front), flipped the brush over and then did the same to the adjacent half of the mirror.

Being fearful of destroying my mirror I shot test frames and blew them up on the monitor.  Dust is gone and no ill effects followed on.  WooHoo! I did it.

blog note: Comments are off for a while.
Posted by Kirk Tuck, Photographer/Writer at 21:53 1 comment: 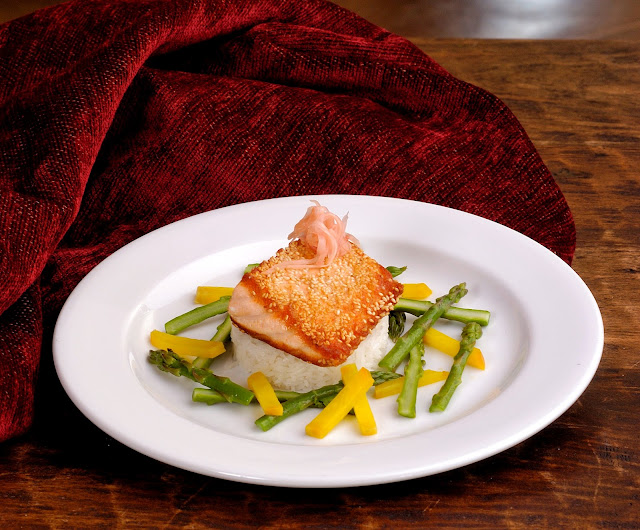 Somedays you're just hanging around the house and it dawns on you that you have some salmon in the fridge and a nice red piece of fabric and maybe you should make a sesame crusted fish dish and photograph it just for fun. You know, just to see if you still know how to light something and use the old camera? So you build a big wall of light to the right of the frame out of some 4x8 foot diffusion panels and pop a few big Profoto flashes into the layers of diffusion so the light glows through and onto your set. And you do it with a vintage Fuji S3 or S5 because you love the way that camera handled the highlights.  Nikon 60mm macro lens. 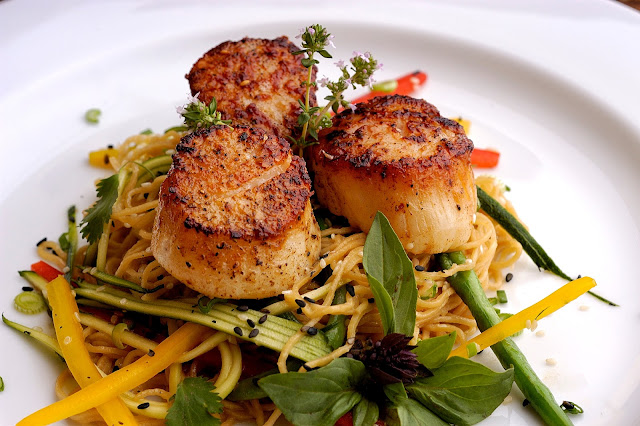 Other days you're hanging out with your favorite chef and he says, "I think I'm gonna make some scallops." And you're very delighted because you know that he's going to make a plate for you as well so you decide you might want to photograph them because you know that, unlike the wannabe chefs on Hell's Kitchen that your guy is going to absolutely nail those scallops to perfection so you head out to the car and grab a few diffusion panels.  You know, the pop up kind that are about 4 feet by 6 feet and you build a quick set and pop a couple of flashes through the diffusion across the plates and then you add a couple of white panels to the other side for some fill but when you woke up that morning you decided that you're usual fill just wasn't going to be enough for today so you borrow a couple of small mirrors from around the house and added those to the white reflectors on the left to get a little gleam from the scallop on the front left and then you went back out to your car to get the tripod you always keep in there for just this kind of stuff and then you bang it all out a couple of minutes after your chef friend plates all the stuff for everyone and then you hang it up, grab a fork and finally get your priorities straight.

And later, as you're finishing off the impromptu repast with a small, chilly glass of Moscato d' Asti you realize that you've melded two of your big passions together and shared in both directions and it feels really cool.  And you did it because it was fun and you wanted to remember the kind of scallop chef-ery that brings tears to your eyes because it tastes so good and you don't even care that you should have used a little oil on the sides of the scallops to get that classic glisten. Or you tell yourself that the glisten is a cliché and you didn't want it in the first place cause you don't like oily scallops.... 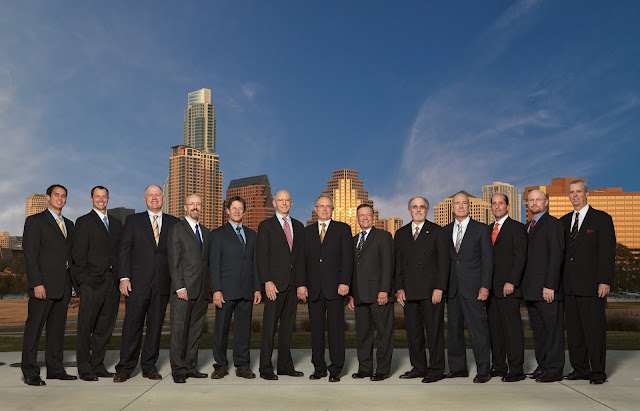 I recently had the assignment of photographing all of the doctors in an oral surgery practice in one group shot.  They wanted a skyline of Austin in the background but they wanted the emphasis to be on the doctors.  The skyline should not compete. We scheduled a late afternoon shoot at the Long Center which is just across the Lady Bird Lake from downtown proper.

I set up the shot so that the doctors were in open shade (the shade cast by a building or natural object but in which the sky is open above...).  It was a beautiful day and the sunset was great. The scene behind the doctors is the view to the east.  I used one big light to bring up the exposure on the doctors to match the ambient lighting.

I brought an Elinchrom Ranger AS RX pack and put all the power into one head, modified with a 42 inch Varistar umbrella box. I put the box as far back as I could in order to get an even spread of light all the way across the group.  I also tried to stay away from using a wide angle lens to prevent the heads of the people on the ends of the group from being distorted.

The shot was done with a Canon 5Dmk2. Lost to the web is the amazing amount of detail in the image. The client's marketing team blew the image up to four by six feet and it was pretty impressive.  One doctor shoed up in bright track shoes but we were able to retouch them into dress shoes.

Groups can be difficult. Open shade and powerful flashes are always your friend.

Posted by Kirk Tuck, Photographer/Writer at 20:49