Some fun, Friday afternoon notes. From the desk of an unorganized photographer... 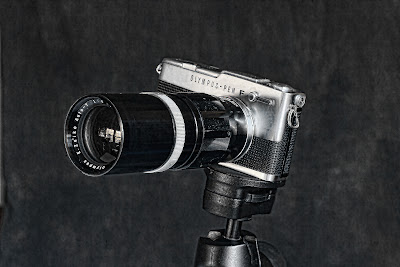 What the heck was I doing in Denver last month? I'd been invited by a company called, Craftsy.com, to make a video course on Studio Portrait Lighting. I worked with a producer from the company to put together an in-depth outline that covered everything from which lights I work with and why, through basic portrait lighting, and into a little behind the scenes of how I work. The program took days to commit to video (hey, I'm a photographer not a professional actor) and almost a month of post production and editing to get just right. What we ended up with is a 2.5 hour video that people can purchase and watch online (and once purchased can watch forever...). I hope that people find it interesting and useful. It's for people who've mastered basic photography concepts and now want to extend their expertise into the realm of studio work. In particular, portrait work.

My only fear, now that we're approaching the launch date, is that there's some sort of very embarrassing blooper reel I don't know about that the producers are going to release to pay me back for being a newbie on the set. Seriously though, I had a great time working with the company and I hope they invite me back for more. I'm not posting  any links yet because I don't want people to go prematurely and be disappointed that the programming isn't there yet. Look for more details in the next two weeks.

An added benefit for me was a deep immersion into studio video production. Spending ten hours a day in front of two and three cameras at a time was like taking a crash course in how to do more adventurous and polished video. And yes, I still think sound is the most important consideration!! Well, sound and having someone incredibly beautiful in the program with you.....

Quick Equipment Review: I don't know if it's the sharpest 50mm 1.4 lens in the whole world, in fact I suspect that just about any current 50mm lens from Leica will handily beat it, but I really like shooting with the beefy and imposing Sigma 50mm 1.4 lens that I recently bought. I've used it pretty extensively over the last month and it's a great match for both the full frame Sony's that I own. For the last week I've had it spot welded onto the front of my Sony a850 and am attempting to shoot (as much as possible) at f1.4, f2.0 and f2.8 just for kicks. I mean, why else own a fast lens? The reason I'm using it on the a850 is that I'm a contrarian. The a850 reminds me of Kodachrome 64. You can't really push it up to very high ISOs so I'm making a conscious effort to shoot everything where that particular camera shines. Most of the time I leave it at ISO 100 and when push comes to shove I crank it on up to ISO 200 and live dangerously. At those speeds I don't think the camera has any competitors that are head and shoulders better. You could argue for a Nikon D800, but only one that focuses on both sides of the frame....

Once you've dialed in an a850 you're working with a really great image maker with a smaller IQ sweet spot than some of the newer 24 megapixel cameras. Interesting point for the DXO true believers: the Sony a850's overall score of 79 is only two points lower than that of the Canon 5d mk3 which is four years newer... The a850 still spanks that camera in the dynamic range realm which means more to a studio type photographer than just about any of the other measurements the inscrutable ones do....

Anyway, back to the Sigma 50mm 1.4. When it first hit the market a lot of people had trouble with front and back focusing but so far (knock on wood) mine is right on the money with both varieties of the full frame cameras. In terms of sharpness most people will take points off for the fact that the lens is very sharp in the middle but that the far corners need to get close to f5.6 to be really, critically sharp. Since I only use the lens for human-style, three dimensional subjects and not ever for flat copy work I understand that this metric is meaningless for the intended use of the lens and joyously use it at all apertures, counting on it to be less sharp in the corners and far edges when I'm shooting images of people. But it's really no different in that regard than the older Sony 50mm f1.4 or those that I've owned from Canon and Nikon. If you need sharp edge to edge, near wide open then you are in the market for a macro lens, not a high speed lens.

When I shot with the Canon 1DS mk2 and the 5d mk2 cameras I bought and (tried ) to use the vaunted Zeiss 50mm 1.4 lens. When I had luck riding with me and all the variables (like focus) lined up for me the image could be very good with rich colors and pleasing tonalities. But the rub in that set up (and I suspect most situations where one is attempting to connect a legacy style manual focus lens with a modern, autofocus camera (which through ancient design choices does not feature focus peaking) ) is the fact that the 50mm ZE, when used in the most popular part of the focus range (closer than ten feet) had a tendency for pronounced focus shift. Even if your green dot of focus confirmation lied to you and told you the lens was in focus it was not. The only way I was uniformly successful in using that lens was to take advantage of Canon's live view function. As you can imagine it was a major pain in the derriere when trying to shoot in bright light. The ambient light just washed out the screen  image and you wound up basically guessing when you had achieved sharp focus.

Of course if you use a camera with an EVF and integrated focus peaking it's much easier to determine the point of sharp focus on the fly. And with image magnification and in finder live imaging paranoid levels of confirmation are much easier.

I've wanted to buy the fast Sigma 50 for the Sony for some time but already owned Sony's version and it's not at all a bad lens in its own right. I finally grabbed a Sigma 50mm 1,4 when the priced dropped from daunting $499 to a less anxiety inducing $399. I've used it for many shoots and love the images at nearly every aperture. I've sold off all the other Alpha capable 50mm variants I had lying around and I'm breathing a sign of relief at my inventory downsizing. While the lens is big and feels ungainly on my a58 (which is a crop frame camera) it's just the right balance in my hands when coupled to the a850 which is in itself a monster sized cameras.

I love shooting with the combo only because of the nostalgia I have for a time gone past. In days of camera yore every "professional" camera came with a choice of 50mm 1.8 or 50mm 1.4 lenses. And that's how we bought them back then. I remember the succession: Nikon F2 with 50mm ai 1.4, Canon F1 with 50mm 1.4 SSC, Contax RTS III with Zeiss Planar 50mm 1.4, and even a brontosaurus like Nikon F5 with the 50mm 1.4 AF.... Those cameras trained my hands and my mind to favor the fast over the flexible and mass over pocket ability. The Sony a850 is their digital analogue. And I love it when I pick it up.

The Sigma 50mm 1.4 is available for all of the "big three" camera makers and, if the price stays where it is, To summarize: in the center of the lens it's very, very sharp---on par with just about anything not made exclusively for NASA or the military. Far edges? On par with just about all the competitors---better than some, even with others. Size? Enormous and imposing. Cool factor? 8.5.  I think you should check it out if you are in the market for normal/fast. It's a good value.

Travel Plans:  I'll be traveling to Berlin on the third of September to do some serious shooting, to meet with execs from a camera company, and to attend a small part of the annual IFA show (fun, high tech stuff----huge showcase with lots of tech product launches and introductions). I'll be there for about a week and I'd love to meet for coffee with any VSL readers who will be in Berlin during that time frame. Let me know what works and when my itinerary is set we can start making plans.

I'll be traveling to Tokyo in early November and I'd love to hear from Tokyo VSL readers. My schedule is wide open on that trip. The Tokyo adventure is purely for shooting and socializing. I'll be there by myself and it's always nice to meet photographers when traveling.

Books: If you don't already own a "Kirk Tuck" book now is the time to get one. They're still in stock at Amazon and they are still full of the same great information they've always had.  Please check out the links to the books at Amazon.com below.

Yesterday I started making a short movie about what Austinites do when the temperature starts to climb like crazy. I'm trying to edit it quickly and get it up by tomorrow. It's mostly just for fun but it shows off what you can do with a little mirrorless camera like the Samsung NX300. I was amazed at how well it handled the wide range of tones in direct sun. Maybe you will be too. Not much difference between the footage from the small camera and the footage from the a99 or 5Dmk2. Stay tuned.

Amazon links below!!! If need diapers or sardines or car parts or even camera gear and books I'd be much obliged if you'd click through any one of the links below to start your shopping adventures...

Posted by Kirk, Photographer/Writer at 18:00 6 comments: