Is a lens alone enough reason to get into a system? Maybe. 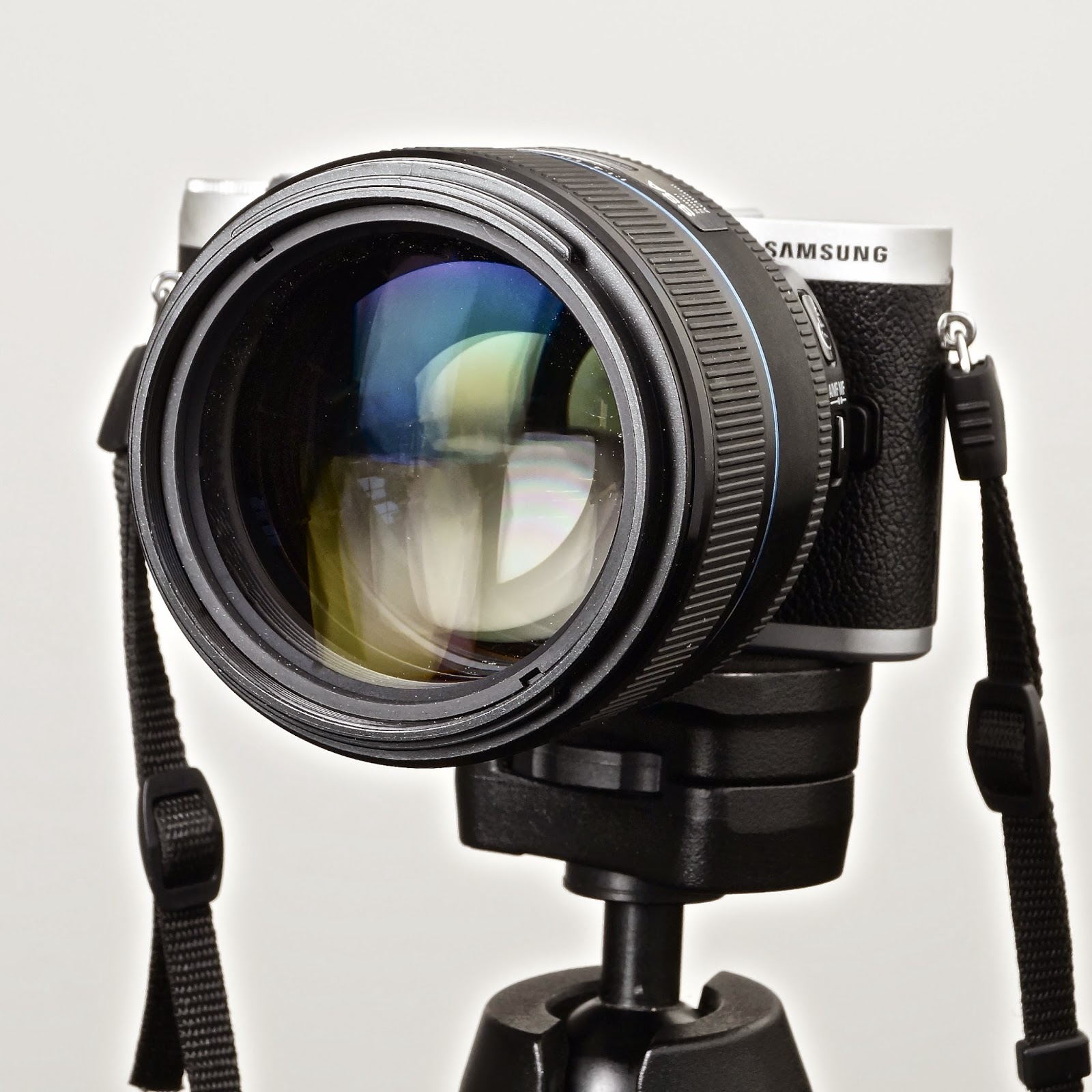 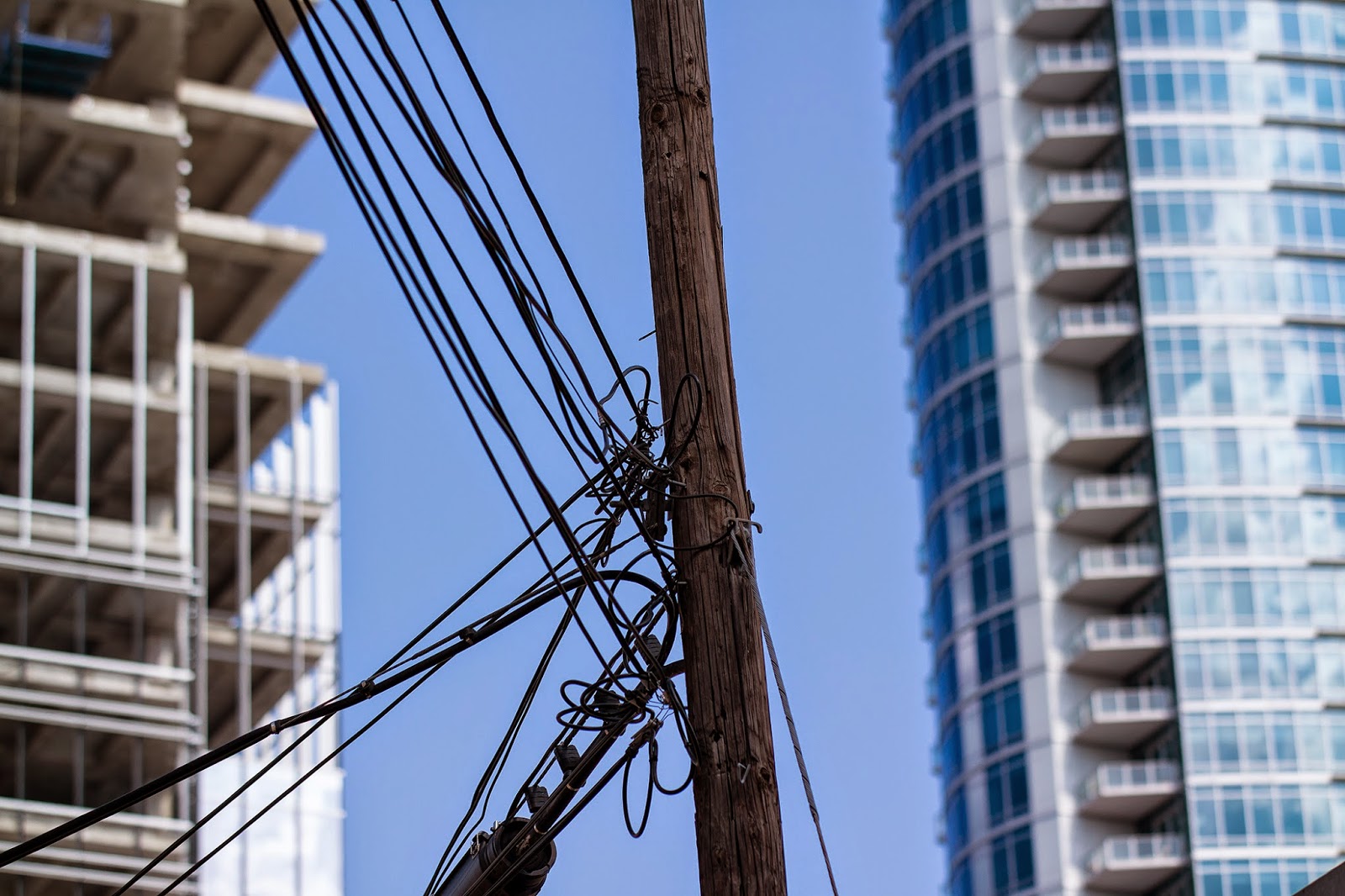 I recently discovered that the lens I've had in my equipment drawer for a couple months now may be the most fun 85mm 1.4 lens I've had the pleasure to own. It's solid and externally boring but it makes images that I find exactly in line with what I want. Longer than normal (120+ equiv.) Incredibly detailed and sharp in the middle, wide open. But is that enough to buy into a system?

When I was growing up in photography there were tons of photographers whose daily bread was made shooting Nikons and Canons. But a large number of them also had an additional camera around their necks. It was a Leica M3 or M2 or maybe an M4 and they generally had one lens for it. The guys who liked portraits had a 50mm Summicron and the people who were more inclined to shoot traditional photojournalism generally opted for a 35mm Summicron. No big system investment. A lot of the cameras were bought used. But the little outlier camera and lens was generally thought to be the shooter's "personal camera" or "art camera." The mechanism that aligned with his core vision.

Now I am certainly not comparing the consumer-aimed Samsung NX30 camera to a Leica M3 but I must admit that even in my fervor to make the Panasonic GH4 and its family my primary shooting system I am happy to have the option of sticking a very well made 85mm 1.4 on the front of a camera with a slightly larger (and very detailed) sensor for shooting portraits. The combo of the NX30 and the 85mm has yielded some nice portraits for me and as soon as one of my clients makes their selections and launches some of the new people images on their websites I'll share them with you.

While it is mentally convenient to "lock into" a system it's also nice to have options. The Samsung 85mm 1.4 is an option I like. Now I am waiting to see if the rumors are true. Will they introduce a professional caliber NX-1 at Photokina? Will it feature 4K video? Will it be affordable?

In the meantime I'm heading back into the giant time vacuum that is known as Final Cut Pro to finish up a long and hesitant edit on a project. Hesitant because when given a huge range of choices it's alway harder to start.....
Posted by Kirk Tuck, Photographer/Writer at 11:55 12 comments:

Camera Raw has come to the Panasonic GH4. In the form of a "Release Candidate." Whatever the hell that means. 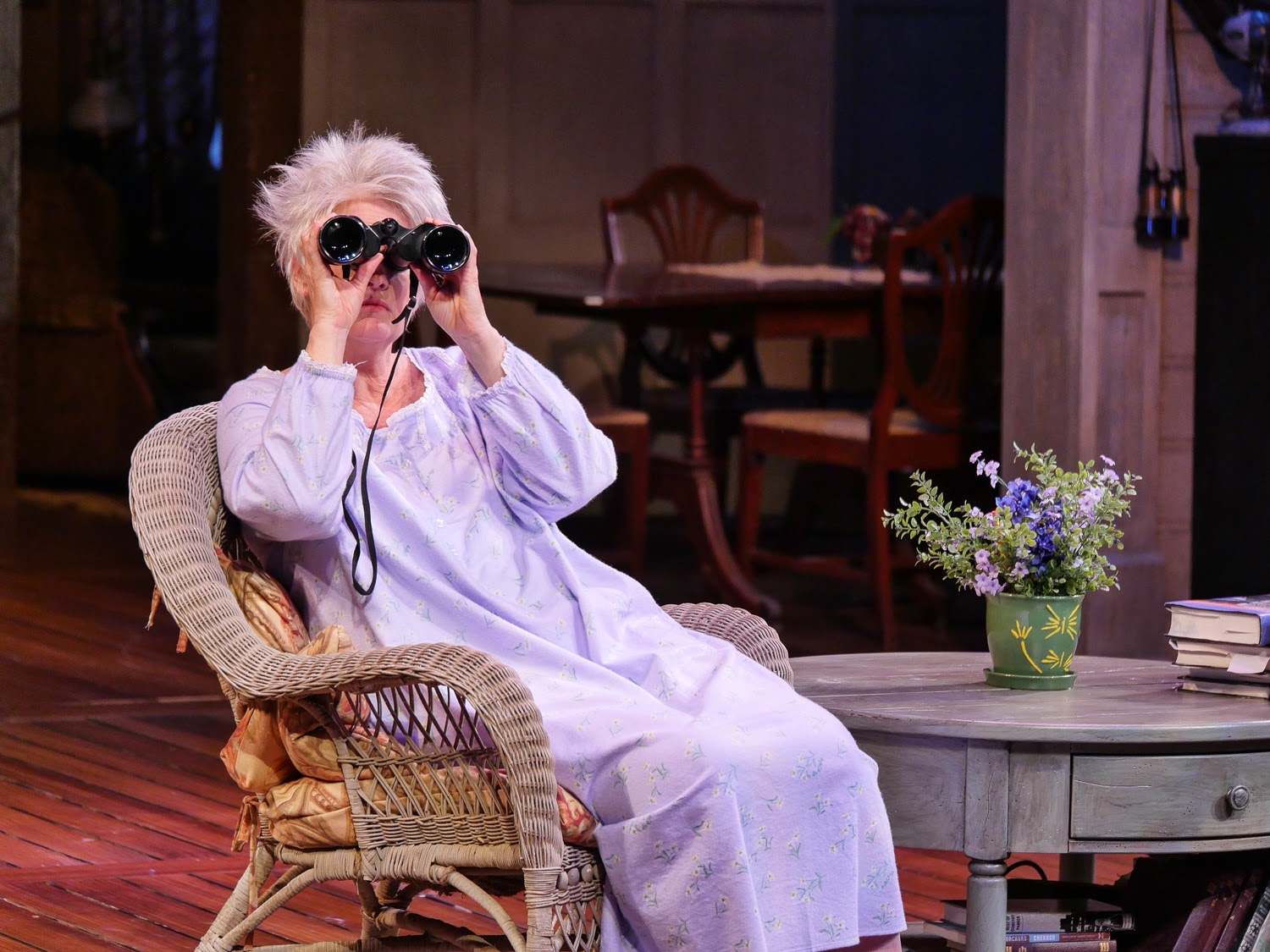 No one has ever explained the term, "Release Candidate" to me but I'm guessing it means, 'we tried a bunch of different stuff and this is the one we think we're going to finally release but we are looking for adventurous stiffs to break it for us, just in case we screwed up mightily...'  Okay, I'm game. I'll download the "release candidate" of the new Adobe Raw 8.5 so I can use the Panasonic GH4 in raw file mode. I am a little nervous about the whole thing because Adobe put a little asterisk by the GH4 name on the list and noted that it was "preliminary" support. Again, as this was unexplained I'll guess that they are still trying to improve whatever it is they do to make the conversions pretty.

Since all raw files seem to be modified Tiff files I'm a bit perplexed by the need for most camera makers to customize their raw code to the point that it becomes somewhat proprietary and requires the seasonal re-writing of the very software we want to use most in our jobs. If I remember correctly both Leica and Pentax give shooters the option of saving files in the ".dng" format which makes the files quite a bit more "universal" and pretty much ensures that even if the camera maker succumbs to the vagaries of the current market and goes away entirely there will always be a way to utilize raw files already shot.

I guess every maker is looking for the tweak. According to Thom Hogan, Sony tweaks their raw files in the A7 series by making them lossy and encoding them as 11 bit files instead of 12 or 14 bit files like Canon and Nikon. Could be that Sony knows something the other two don't but it could also be that they are looking for some fast compression and more images on a card to serve to photographers who don't look under the hood much. Other makers seem to bake in some noise reduction that can't be turned off while some (medium format) even offer 16 bit files.

At any rate I am happy to finally have a convenient way to work with the GH4 raw files. I'm heading out today to shoot some test shots so I can load a few and see if I can do a better job with sharpening and noise reduction than the camera does, on the fly with Jpegs. The update corrects a glitch for older Nikon compressed raw files and it provides support and lens profiles as detailed below. So....if you've got a GH4, an Oly M10 or one of the other beauties on the list you might consider heading over to Adobe:  http://labs.adobe.com/downloads/cameraraw8-5-cc.html 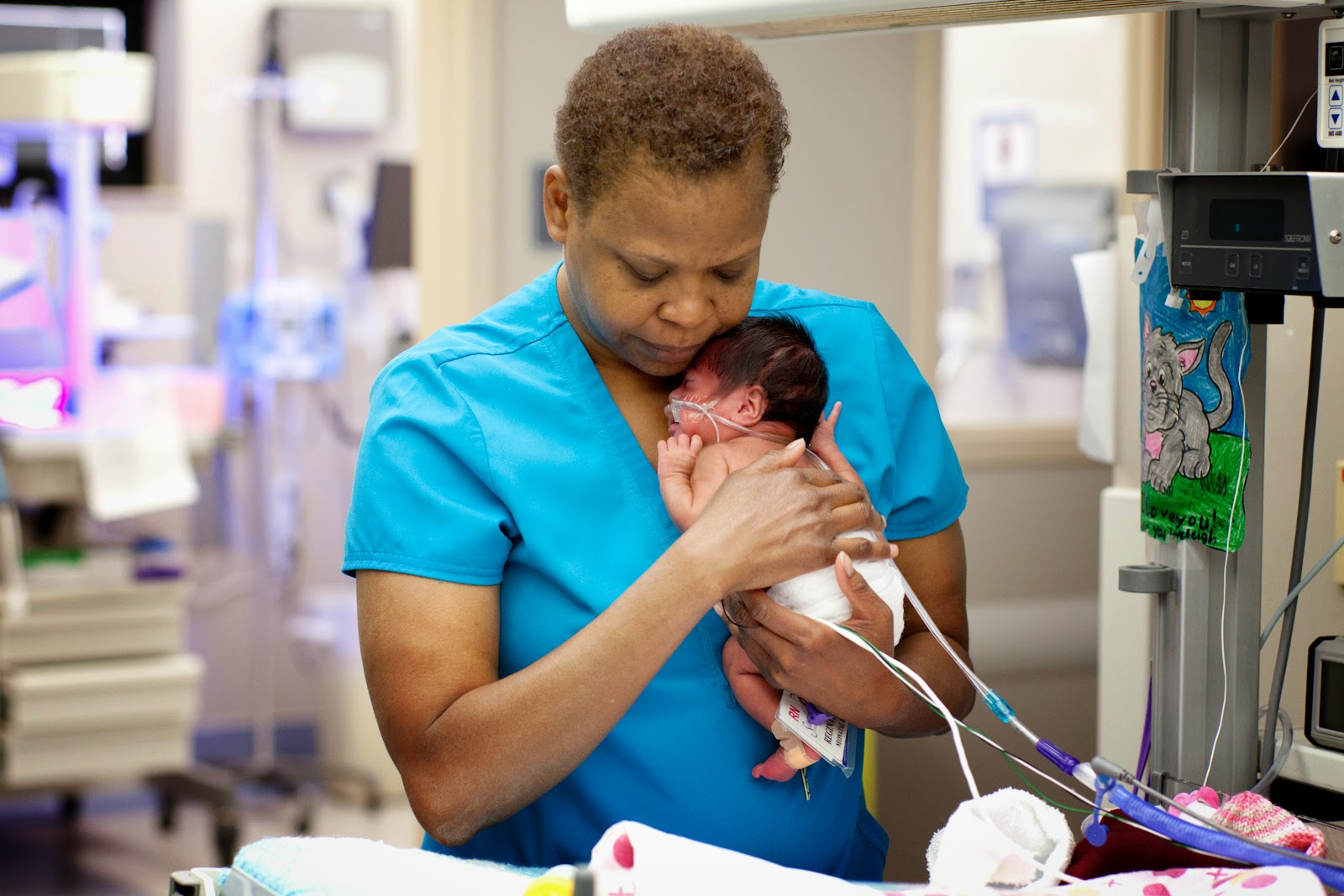 I actually love making photographs of healthcare subjects. There's drama, compassion and it's all about the human condition. When I was younger I would faint at the sight of blood. As I've gotten older and had one health scare I've become less sensitive to things like injections and blood tests and more in tune with the idea of how vulnerable we all are when we present ourselves to our health care providers. I like that my images can help to demystify or humanize the experiences. That we can tell somewhat universal stories so that people can understand what they are getting into.

These three images are some of my favorites from various shoots I've done in hospitals in Austin and San Antonio, Texas. I love looking at work that spans time and these span a decade. They were also done with three different cameras and three different lenses. It's interesting to see how the vision changes along with the equipment.

The top image of the nurse and child was done most recently. We did it in 2012. I was using the Sony a99 at that point along with the 85mm 1.4.  With the progress in sensors I was able to shoot without having to supplement the lighting in the space. That made my job a bit easier and it was required on the preemie ward. Getting the right image required me to position the people in the right light since just about every place is top lit. It also required finding a background that wouldn't fight tooth and nail with my main subjects. The image was shot at f4 since that's both a sweet spot, performance wise, for the lens and also provided enough depth of field to cover what I wanted. With the good high ISO performance of the camera I was able to shoot at a high enough shutter speed to hand hold the camera. It's pretty straightforward documentation. 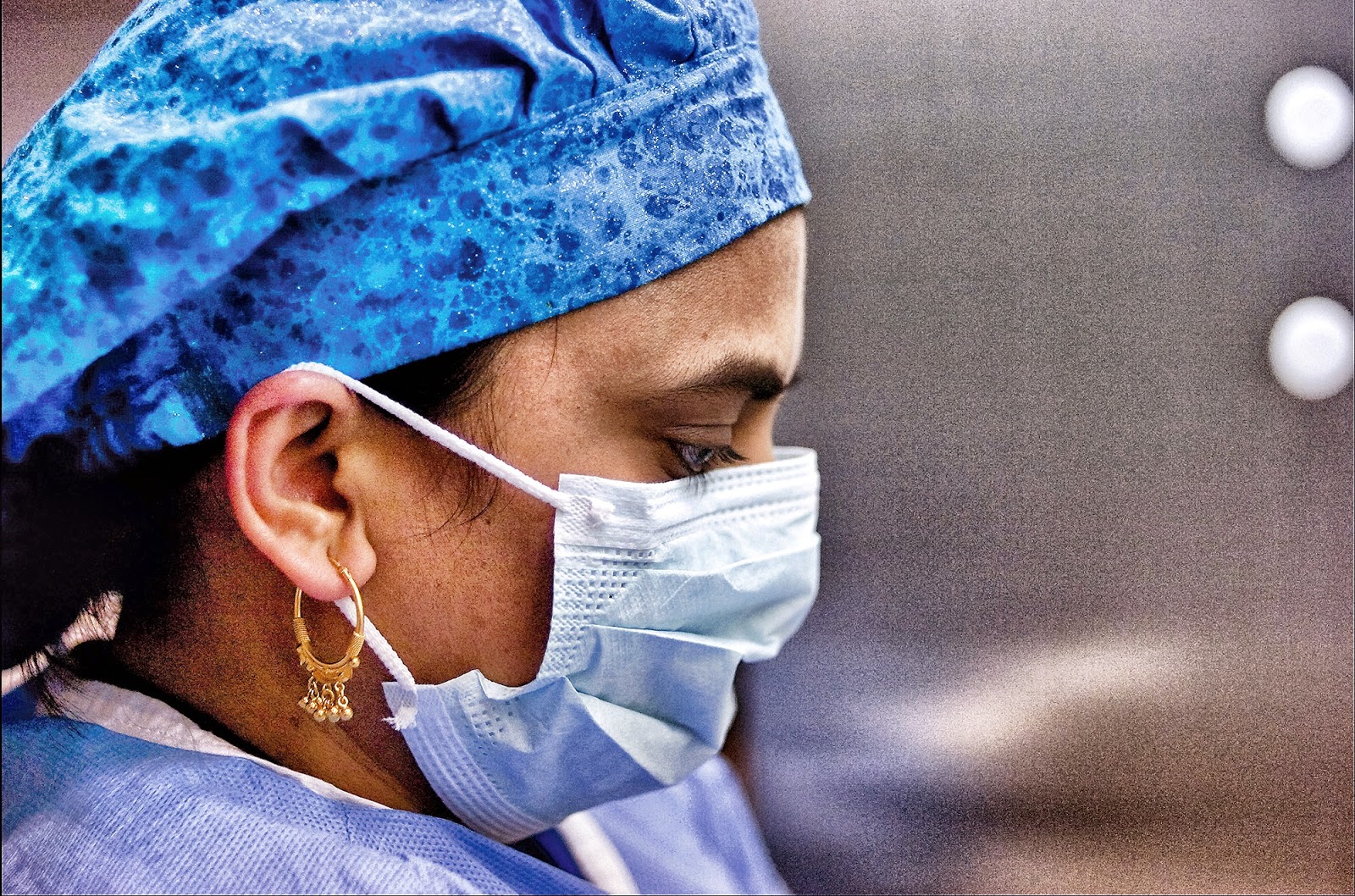 The image just above was done back in 2003 on a long, two day shoot for the Austin Heart Hospital. Our job was to fill a bucket list worth of images for an ad agency out of new Mexico. Back then we used two cameras primarily; the Kodak DCS 760 (larger APS-H sensor, 6 megapixels) and the Nikon D2H. I loved the low ISO image quality of the DCS 760 (think ISO 80...) and I used it wherever possible with flash or in daylight. But my "low light" camera was the D2H which allowed me to shoot images all the way up to a stunning ISO 800 with "containable" noise. This image was shoot quickly and hand held. The lens, if memory serves, was the really good, Nikon 28-70mm f2.8 (which I like much better than the 24-70mm that followed it).

This woman was working with blood samples and needles and I was careful not to look down at her gloved hands...  I shot quickly. Probably no more than five frames. I chimped and then moved on.
When I came across the image in post I realized that I had underexposed by at least a stop and back then cameras were much less forgiving about that. But the client liked the image and wanted to use it so I correctly the exposure and sent it along. While it has some pattern noise that show up on the solid areas the client didn't care. He said, "This looks like journalism. It looks real and not set up." Okay. I can go with that. I just love the raw feel of the image. 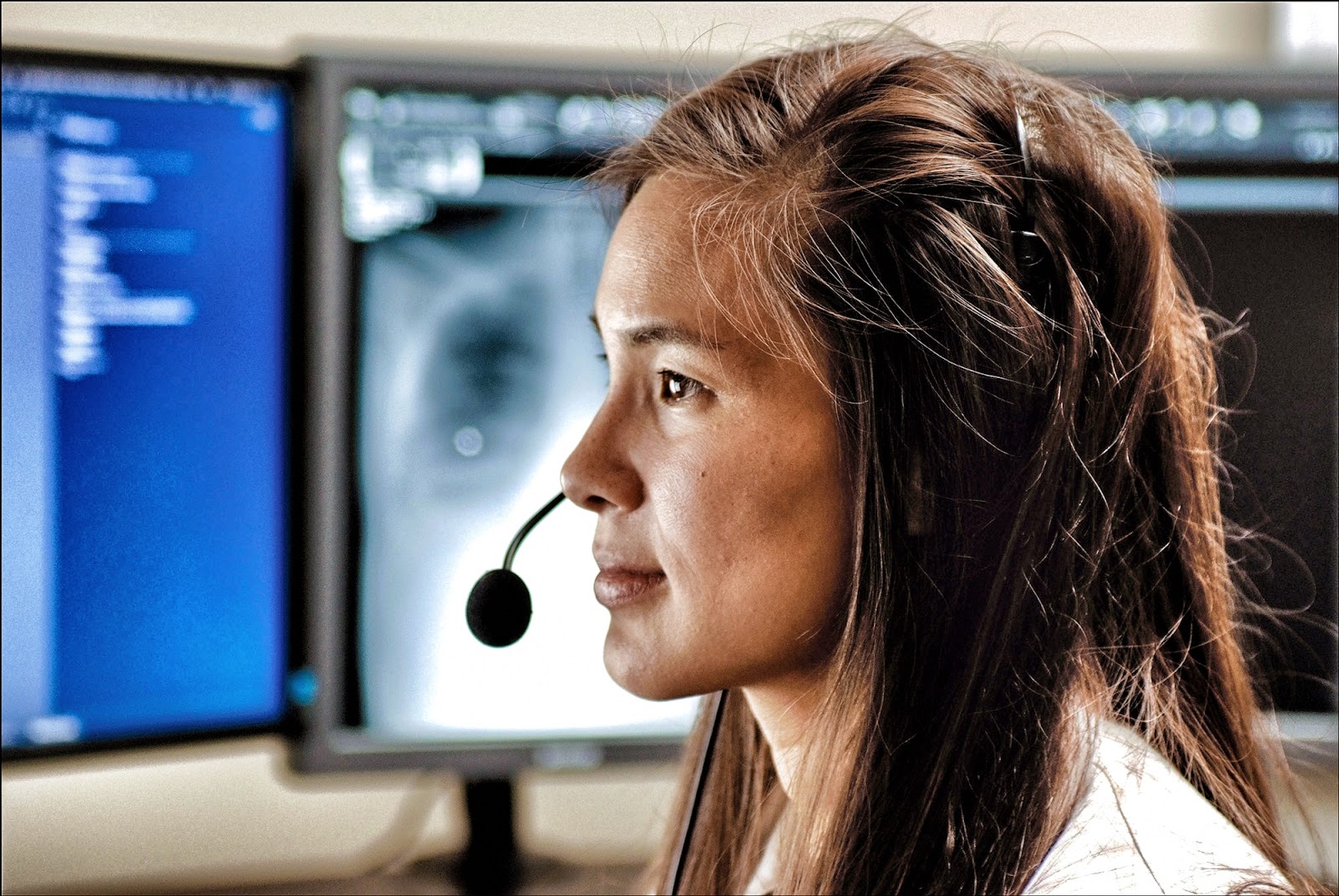 The final shot is one I've always liked. I used it in one of my books and I've written about it before. It's lit almost entirely by flat screens in the small reading room. There is one flash directly behind the panels you can see in the background. There is a second light from the far corner of the room to provide some hair light and separation but all the light on the doctor's face is from the screen in front of her and a small reflector just to the right of the camera.

The camera was one of my quirky favorites, the Fujifilm S5. I loved the way that camera handled flesh tones! It was magnificent. And I looked the tongue in cheek interpolation to 12 megapixels. It even said "12 megapixels" on the body so clients at the time were quite happy. But the real eccentric part of the image was the lens. I'd picked up a very old copy of the Sigma 24-70mm f2.8 for a couple hundred dollars. The focusing was sloppy and sometimes the zoom ring became withdrawn and recalcitrant but just look at the out of focus effect in the background and the sharp-but-not-too-sharp imaging of the main subject.

The image was shot in 2007 just as I started writing my first book. The one about using battery powered flashes. The marketing director for this client had a lot of respect for the doctor's time. We usually needed to get in, set up a shot, light it, and shoot it in about 30 minutes. Less time wasted was better. The time constraints worked well with our "new" lighting techniques. Back then we called the little flashes on the nano stands "light on a stick." Now it's pretty much ubiquitous. Not so back in the days of 80 ISO.....

As I said, I love shooting medical marketing images. It's all about the people and their interactions with each other and with ever changing technology. And that makes everything more fun.