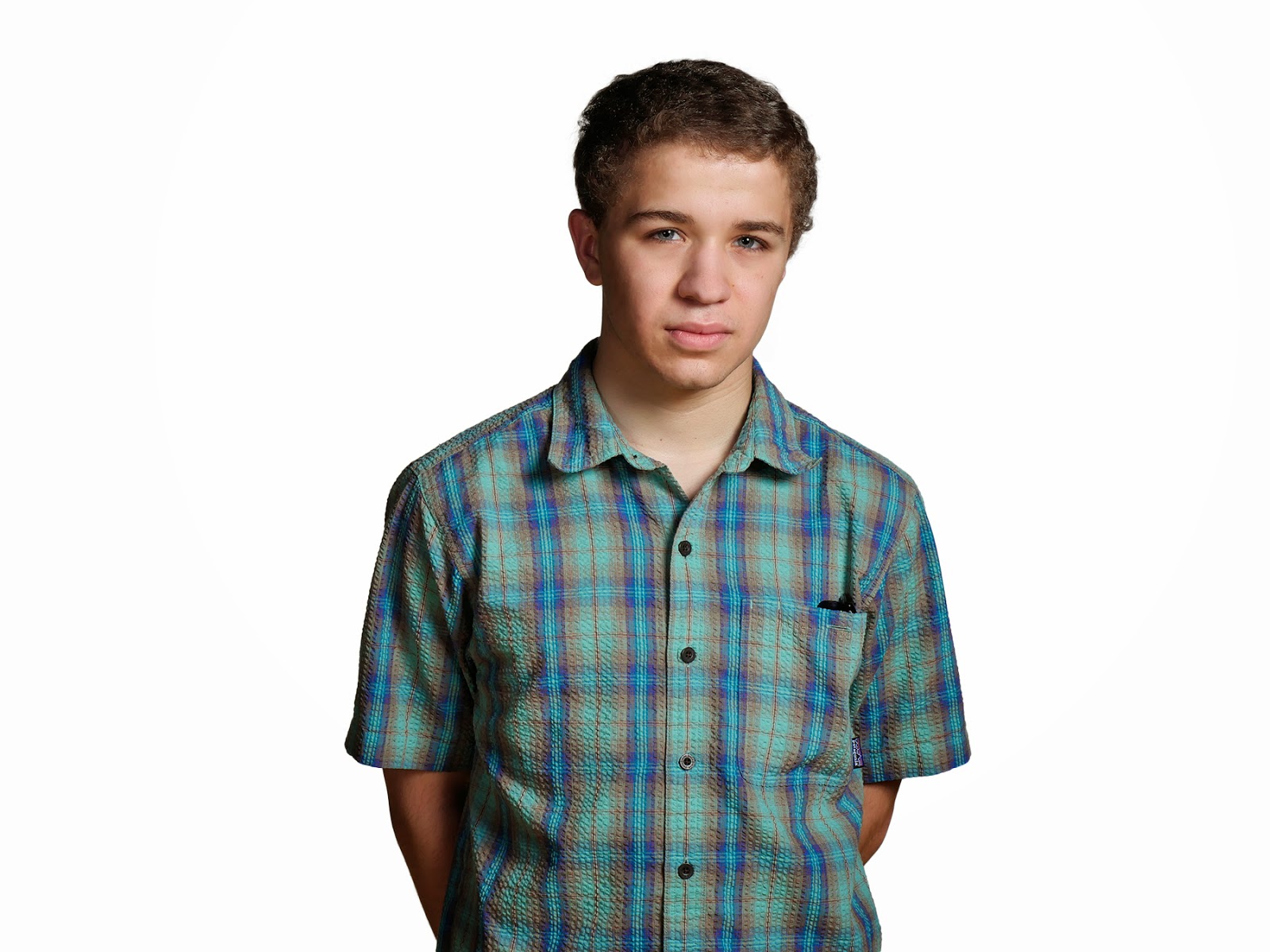 Ben was between projects today and agreed to come along and assist me on the back to back, still photo/video project I had on the books for this afternoon. We hit the ground running at Zach Theatre and set up our background for the stills. This is a shot of Ben standing in for the actor who will be starring in Tommy in July. At this point we were still doing some fine tuning and I needed to bring up the levels of the background lights. But I liked the image of Ben so I kept it.

Ben has done probably  a dozen or so serious video projects and maybe 100+ fun, goofing around video projects with friends and at school so he's very conversant with the role of director and producer. He also knows his way around lights and grip equipment.

Once the stills were done we moved on to lighting for the green screen video. Again, he moved smoothly and quickly through the process all the while keeping his ears open for changes in the agenda. He likes to think a couple steps ahead...

The director on the set was happy with the lighting and got the shots he needed. The Theatre now has good building blocks for print, web and TV to use in promoting the upcoming show. As soon as the actor left the set Ben was wrapping cables, pulling down lights and packing up stands.

After we dropped off our intern at his college dorm Ben and I headed home. He's not a cellphone addict so he left his phone at home during the shoot. He checked his messages when we got in, critiqued (at my request) my current edit on the restaurant video I've been editing and then headed out the door for a dinner party.

I was able to teach him something new today. Not sure when he'll ever use it again. But when you light for green screen your biggest fear is that the green reflectance will "wrap around" your actor or talent and give you green edges on the main subject. Then it becomes a nightmare to composite. I learned a long time ago to put a high backlight at the back of the set, aimed at the subject's back. The light should be gelled with a magenta gel (opposite of green) which will help cancel out the color of the reflectance. You don't need a heavy magenta. A 1/4 to 1/2 minus-green works great. We looked long and hard at the video footage in an onstage monitor and couldn't find a trace of the dreaded green wrap.

It's fun to work with the kid. He's been booked up with projects and social functions since the end of school and I feel like I barely get to see him. Nice to work with someone really good.

Posted by Kirk, Photographer/Writer at 20:54 3 comments:

Packing for two, sequential, inter-related shoots. One still photography and the other video. Double the pain? 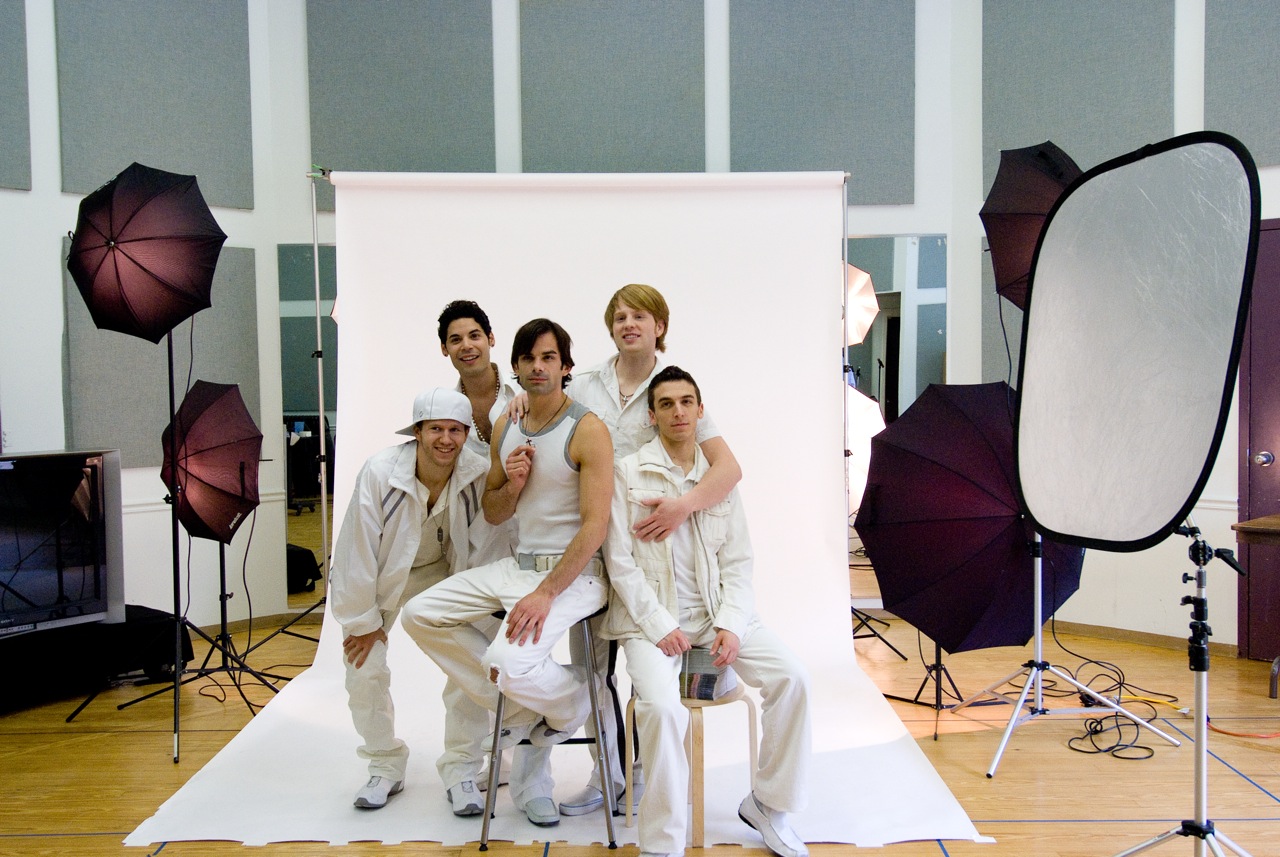 I had the highest hopes for what some on the web are calling hybrid imaging. The idea is that we'd find one camera that would do really great photos and really great video (done!) and then we'd find one type of lighting that would work for both types of imaging. We would happily switch between stills and video without ever having to change our lighting and everything would be quick, convenient and merry. I bought into it. But it's total bullshit----at least for now.

Let me backtrack... I bought into the concept because, for many of the jobs I do the new way can really work. If I go out to shoot an executive portrait and the marketing department also needs an interview I can set up LED or fluorescent lights, grab a Panasonic GH4 (or even a Sony RX 10) and get good stills and video content at the switch of the mode dial and with the attachment of a good microphone. Where things start to break down is when we move beyond the easy stuff and introduce subject motion and the need to freeze action in still images. All of a sudden we're back into the realm of flash.

I'm doing a job today that would be perfect for continuous lighting if it weren't for the fact that we'll need to create a feel of rock concert kinetics with our actor. We're doing marketing images for Zach Theatre's rendition of Tommy and we're going to try and get wild stage movements and swinging, Roger Daltry-esque microphone moves frozen on a white background and then we need to get the same kind of moves again for video, on a green screen background. Ouch.

The fast movements of the actor require the action stopping short exposure times of flash. He'll also be wearing a jacket with fringe all along the sleeves and the fringe will create even more movement as the actor rocks across the white background. I'm taking four Elinchrom flashes to deal with this part of the shoot. We'll set up two units to light the background, one unit for a main light and the fourth for fill or accent. We've done this a thousand times before and I have no fears that we'll be able to get exactly what we want for the stills. With flash.

But flash is, of course, useless for video. We're shooting the actor against a green background so the editor can composite some really cool animation into the background. And that means that the screen has to be evenly lit and as far from the talent as focal length and studio configurations will allow. We don't want the green from the background to wrap around onto our actor's gold,  highly REFLECTIVE, jacket.

I'd like to through a lot of light onto this shot so we can use 60 fps to make the video look sharper. And we need to be careful to match front and background exposures so we don't have issues in post production. I'll be using six, big fluorescent fixtures with modifiers, where necessary. Two directly on the background, two on the talent and one as a backlight. The backlight fixture will have a layer of magenta gel on it to combat any incursion of the dreaded green wrap. (The Mag. filtered light will serve to cancel out the green).

To do these shoots, one after the other, requires: A set of background stands. A white background. A green background. Clamps to tighten up the backgrounds and kill wrinkles. Eight or nine light stands (the continuous lights require more stands for the modifiers we put in front of them). Diffusion frames for modifiers. Four Elinchrom strobes with umbrellas and a soft box. Six (heavy) fluorescent lights. Filter gels. Four 25 foot extension cords. One still photo tripod with ball head. One video tripod with fluid head. One monster Gitzo tripod as a solid base for our video slider. One heavy duty cart to transport everything with.

The schedule is tense. We leave the studio at 12:30 and start unloading and setting up at the theatre at 1 pm. The still shoot is first. We fine-tune and get our still shots from 2 until three. At three on the dot we pull down the white background and exchange it for the green one. We pull all the flash units and replace them in new configurations with the fluorescent lights. The actor's make-up and costume gets refreshed while the director and I fine tune the video imaging and go over settings.

We're using the clean HDMI out of the camera into a digital recorder that writes 10 bit Pro-Res 4:2:2 because the editor is old school and got burned on much older video cameras many years ago. He wants to start with the cleanest, sharpest green screen files he possible can. I am more optimistic and I'm dying to try shooting in 4K and then importing in FCPX as 1080p (in Pro Res 4:2:2) but we're working as a team and the editing is his area of expertise so I bow to his experience.

We need to be lit, metered, color correct and ready to go by 3:30 pm. That's a really tight turn around. But I think we'll manage. We have both Ben (super assistant) and my new intern in tow. Ben will take charge in wrapping up the gear we used for the stills. We start shooting the video in earnest at 3:30 because we have a hard stop at 5 pm when we have to start packing and hauling stuff out. The theater needs the space back by 5:30 pm.

If we shoot to the digital recorder in the video sequence then my part of the video production ends them. My job is to get the director and editor the best technical content I can so they can concentrate on directing and editing.

Ben and I should be back at the studio by 6 pm and we'll unload before we head to the house. Saturday I'll come back to the studio after swim practice and unpack every thing and put each tool in its place. Trying to stay organized so we don't waste time getting ready for next week's projects.

It would be a lot easier to do this all with one set of lights but sometimes you just have to bite down and do things in the optimum method. For this shoot it's all about lights and making stuff sharp. For the video it's all about nailing the green screen. And as far as I can tell there's no way to hybridize the lighting tools. Sorry Hybrid Imaging.


Posted by Kirk, Photographer/Writer at 10:42 8 comments: