Behind the Scenes at Our Green Screen Shoot. And a Few Notes About Some Patents Pending. 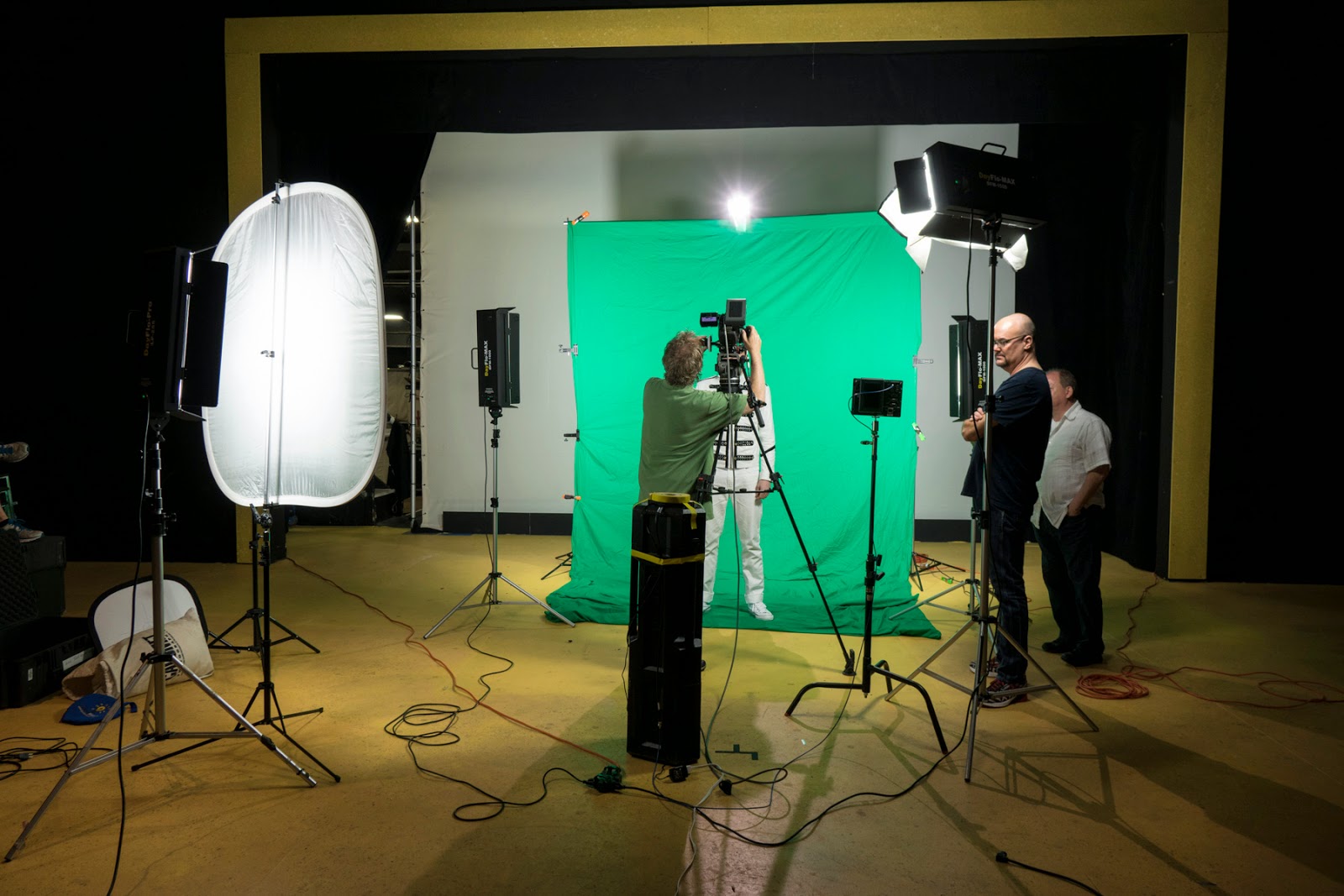 I wrote about our two shoots for Zach Theatre yesterday and I thought today I'd add some behind the scenes images to the mix just to show the set up. We're using two 4 tube fluorescent fixtures on the actual green screen. These are on either side of the green screed and about ten feet in front of its vertical plane. They are placed and turned to give an even spread of light across the background. We were able to achieve a fall off from center-to-side-to-side of about 1/10th of a stop. The small horizontal rectangle just to the right of the video camera is a small monitor which allows the clients to see what the image looks like and to show cameraman, Eric Graham, various things like a graphical representation of the fall off from one side of the green screen to the other. 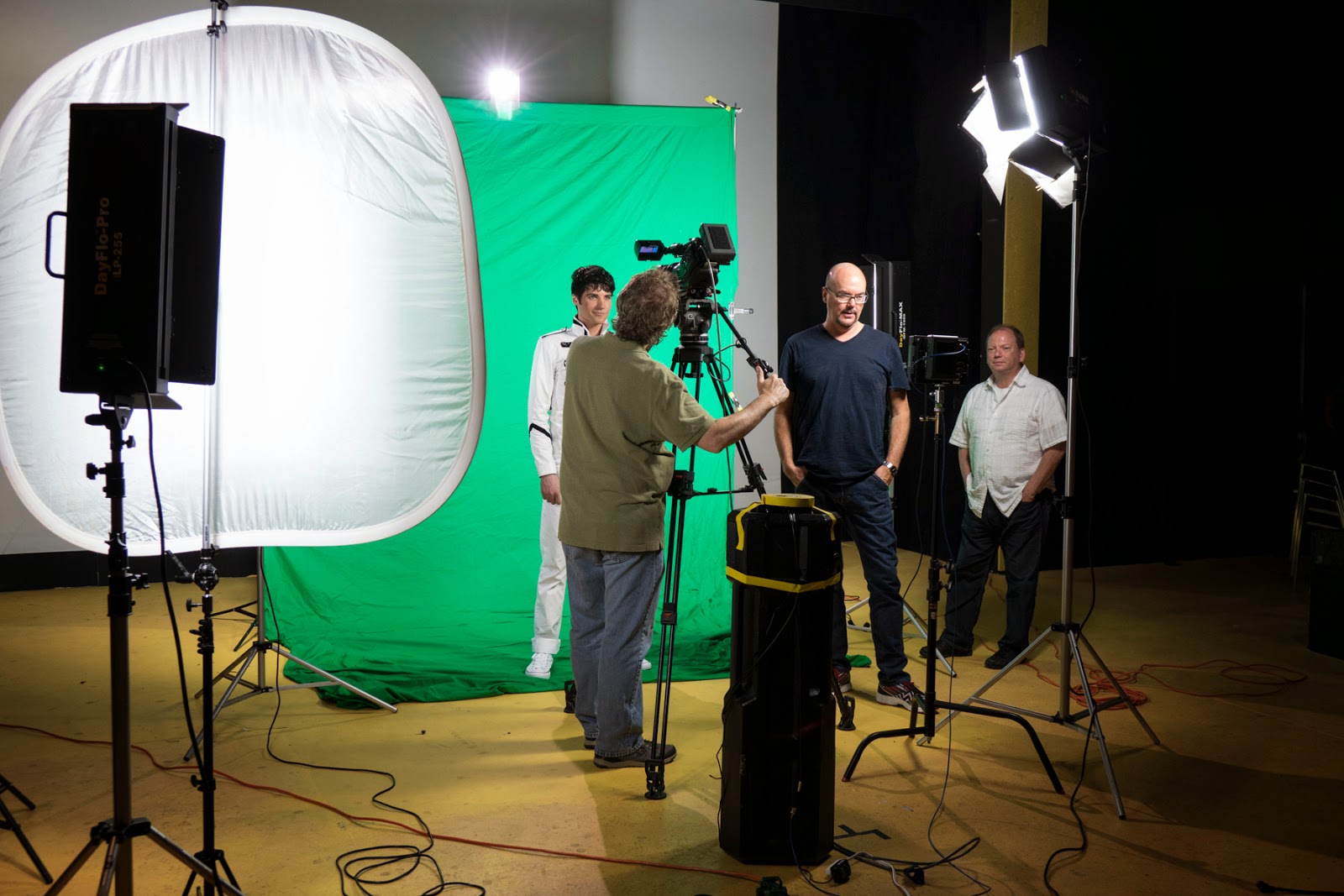 This view angle shows our fill light on the left side of the frame (closest to camera). It's a 2 tube fluorescent fixture that's being diffused by a one stop silk diffuser. It's about twice the distance from the main subject as the main light which is on the other side of the camera. The soft, low level fill just serves to keep the shadow side of our actor's face from going into deep, noisy black. 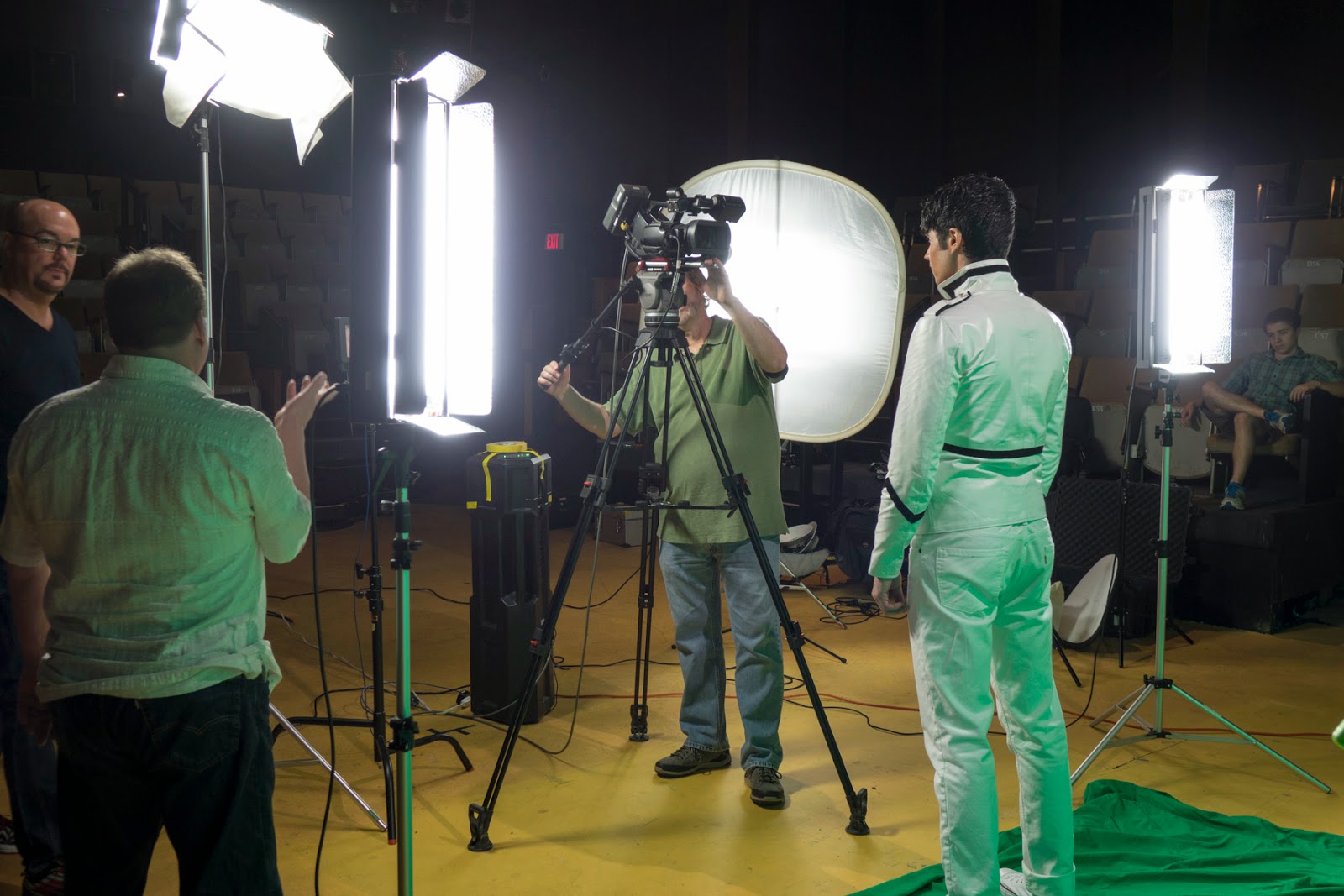 In this particular shot we're dong a zoom from a close up that frames just one of the actor's eyes and zooms out to reveal the actor from waist up. We chose to use a Sony EX3 camera in order to use a longer range zoom that has a power zoom feature. The lens is par focal which means that it stays in focus throughout the zoom range. Absolutely critical for this particular shot. 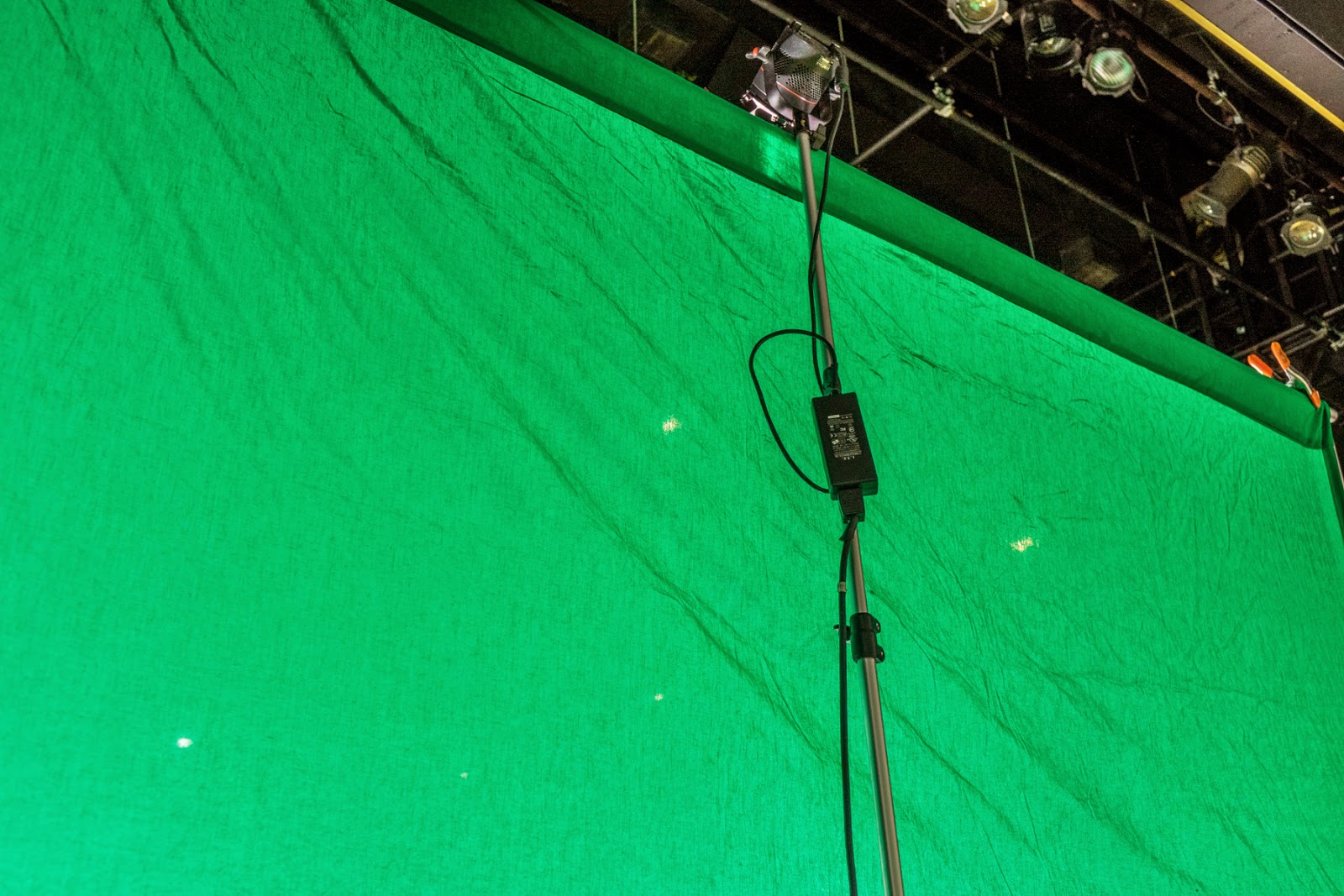 I mentioned yesterday that one of the problems we're always trying to solve in shooting green screen is to keep the green color from reflecting off the background and wrapping around the subject. When that happens it nearly impossible to drop out the background cleanly and can ruin the effect you might have had in mind for your compositing project. Shown here is our solution. It's a Fiilex P360 LED light covered with a 1/2 minus green (magenta colored) gel. The gel helps to neutralize any bounce back from the green. It's mounted on a 12 foot stand on the back side of the background cloth and pointed out and down at the head and shoulders of our actor. 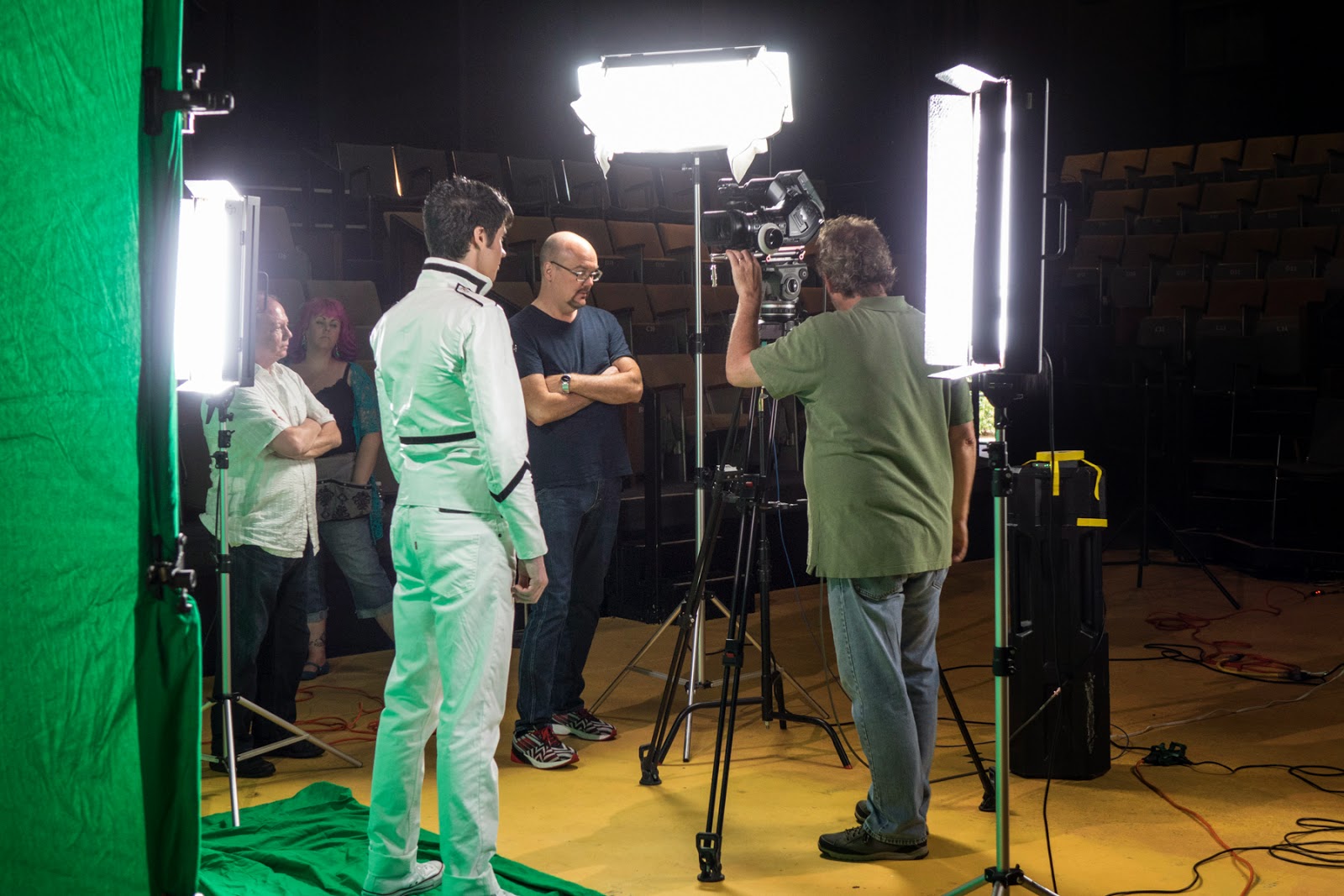 In this shot you can see our main light just above and slightly to the left of the camera. It's a 6 tube fluorescent unit that belts out a lot of light. I have it covered with a thick, white diffusion material because I think it's cruel to have a bare light shining directly into the eyes of the talent. The diffusion helps take the edge off the light. I also like some diffusion on my lights to smooth out transitions.

You'll notice that we don't have sand bags on our stands and I would counsel you to make it a practice always to sand bag your heavy lights. I took a chance since we were working on a closed set on the stage of a live theater and the crew and artistic personnel are used to working around possible hazards during rehearsal and stage creation. That being said, I was nervous about the high LED light until we finished the shoot and brought it back down. 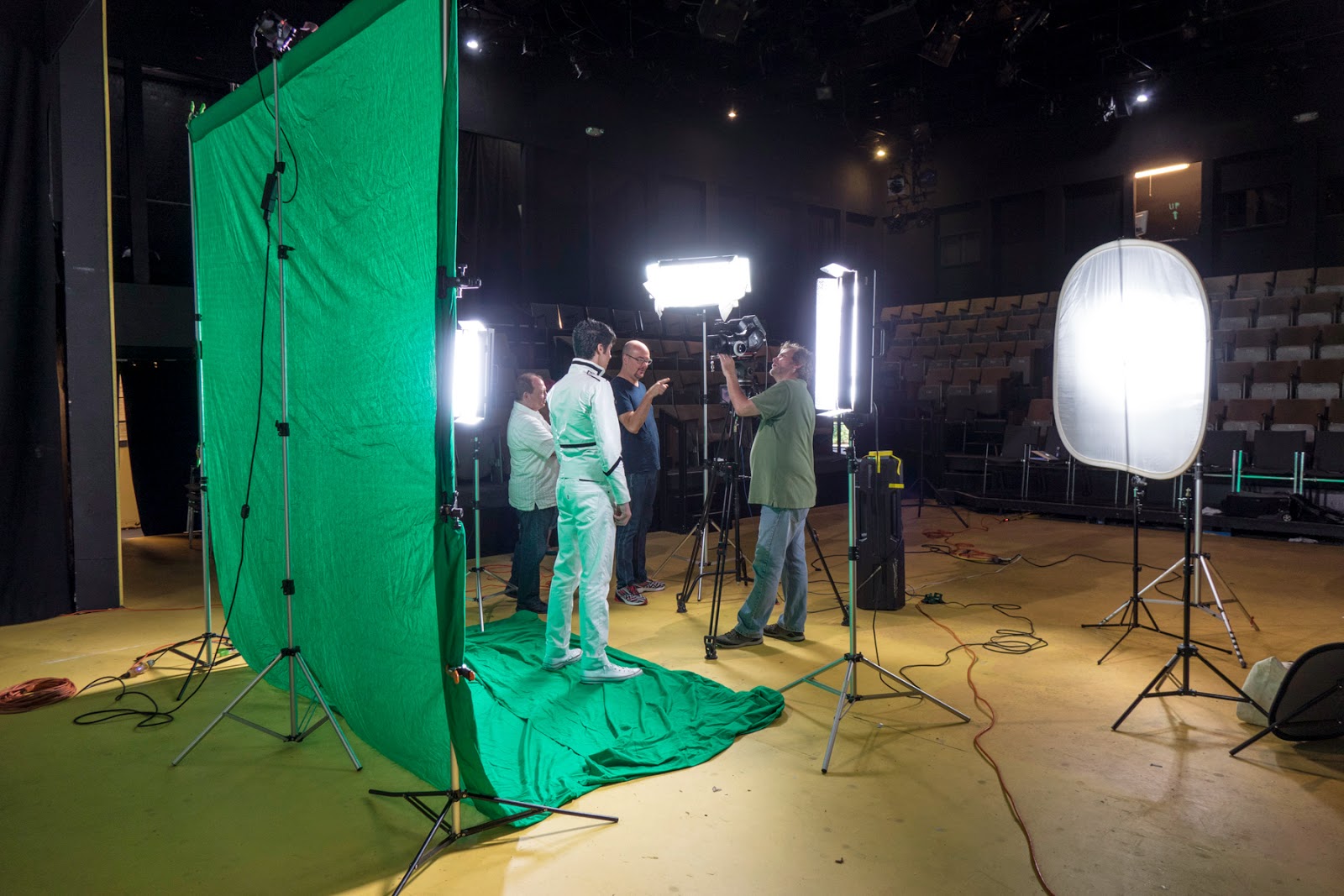 It is rare that we work this close to the actual green screen. Best practices call for getting the subject as far out in front of the screen as possible. We were limited by the width of the screen (about 9 feet) which, when we comped to mid thigh to top of head shot meant we were already at the side-to-side edges of our material. Our other limitation was our time with the space and with the actor. We had to shoehorn a still shoot, a lighting change and a video shoot all into the space of three hours. In a higher budget project with a more flexed out schedule we would have done this in a dedicated studio with a wide (twenty feet or more) cyc wall painted process green.

If we had run out of space and it had been critical to get more on the sides but maintain very high resolution we would have turned the camera sideways, turn the file in post and then matted in more green on the edges. An additional burden for the editor but sometimes a trick to save the shoot from a host of technical maladies. 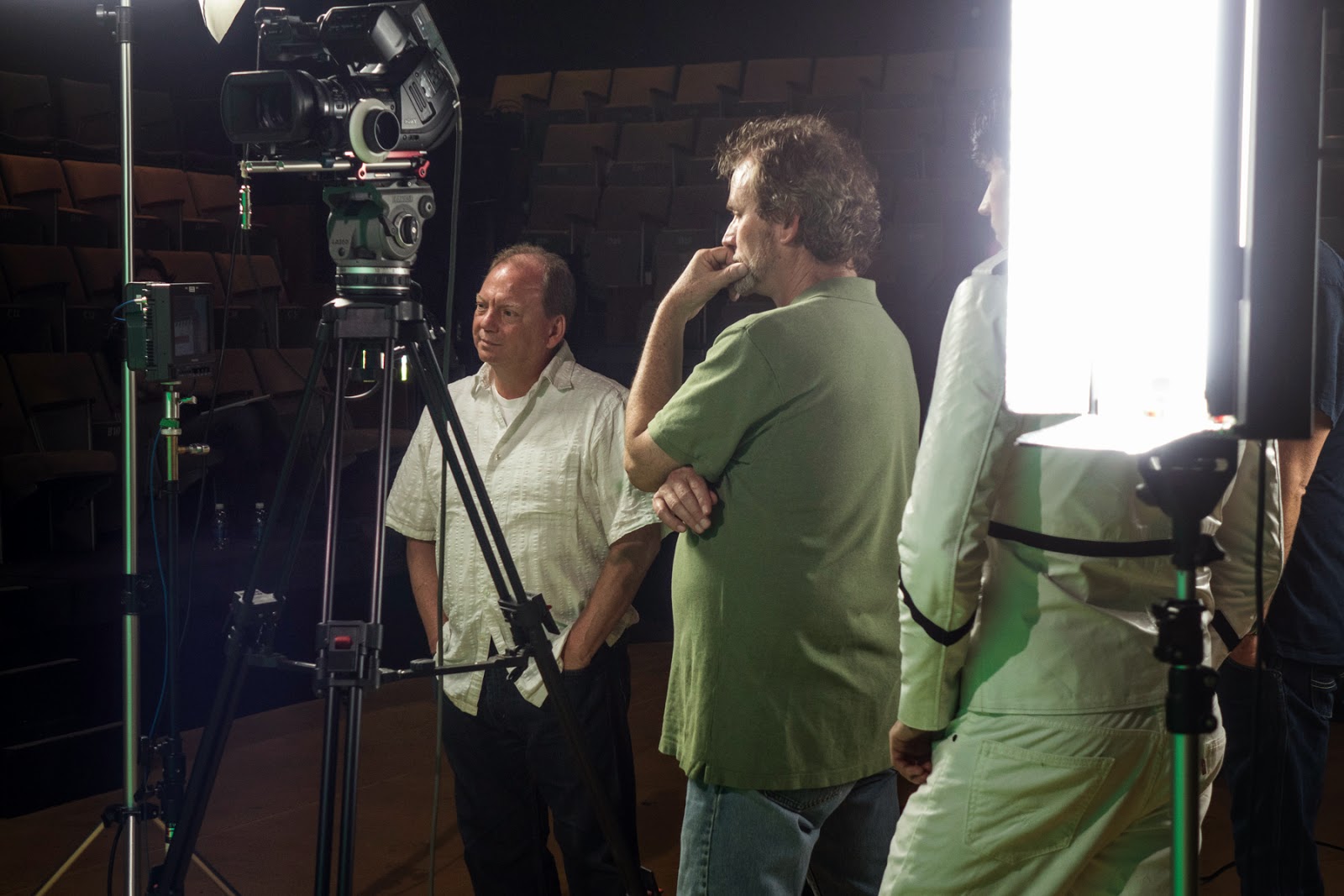 Over the course of two hours of video shooting we ended up with three spot variations, any one of which would work for our fifteen second TV spots. 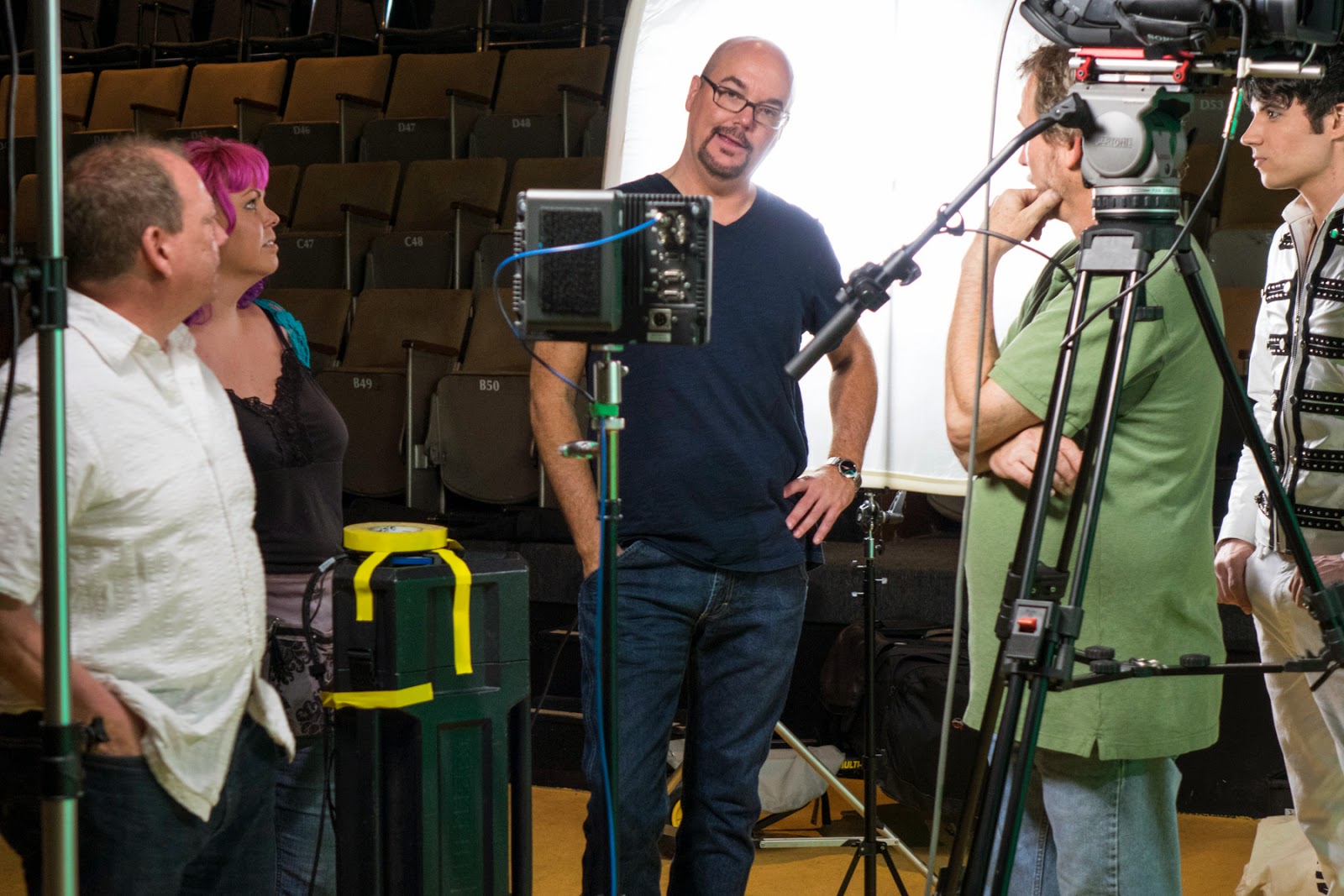 We used a digital recorder with the EX3 camera so we could get 4:2:2 color which makes compositing easier. We used a small monitor so Dave Steakley (facing front in a blue t-shirt) could review the various takes to gauge the emotional feel of the clips. Eric, our camera man and director was looking at the same monitor for things like timing, zoom smoothness and accurate focus. I checked the monitor from time to time to gauge exposure and lighting aesthetics. All in all the projects were successful. The spots will run in  two weeks, the post cards will go out in a week and a half and all the edited and finished material will be up on the web during the final week of pre-production before the opening of the show. 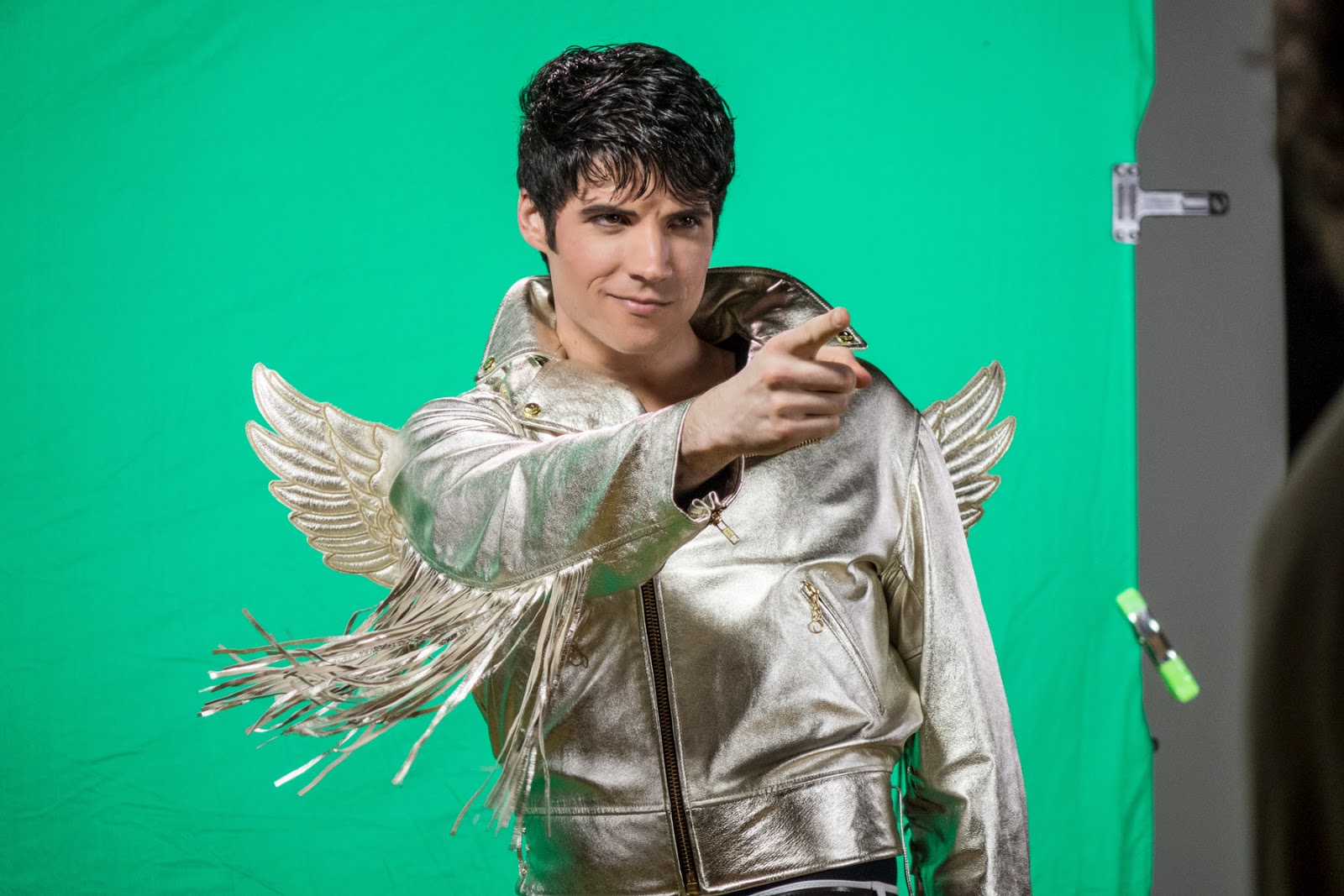 And the show is a re-imagined version of the rock opera, Tommy.

All of the "behind the scenes" images were shot using a Sony RX10.  The RX10 is the most flexible camera on the market today. It's a great still camera, a great travel package and one of the best hybrid video/still cameras on the market. I hope Sony doesn't discontinue it before I pick up another one.

On to more important stuff: Once Amazon patented the white background I couldn't stop thinking of potential stuff to patent. So, my I.P. attorney and I have been busy and here's what we have patents pending for at the moment, so please don't infringe or we'll come down on you like gangbusters and hasten my own yacht centered retirement at your expense.

2. We were also amused that no one had patented the placing of photographic gear on a cart and using said cart to transport photographic gear from one place to a separate and different place. We rushed to patent the actual transportation ( or "movement" ) of photographic gear, including but not limited to, cameras, lights, stands, boxes, photographic equipment containers and other sundry devices, on a cart that is pulled or pushed from one location to another. If you like to bring a lot of equipment to your remote locations you'll need to lose the cart and hire more photo assistants or Sherpas. That or risk the wrath of our legal arm.

3. We are close to owning HDR or "High Dynamic Range" recording. While some of the tools for creating the effect are patented we discovered that no one owns the patent for actually doing "Technicolor Vomit" (the technical term...) in post production or for actuating it automatically on your camera. We doubled down on this one and also sought to trademark the term, "HDR".  I figure every time Trey Ratliff shoots something I'll get a small royalty from him for the initial infringement and another micropayment from anyone who describes the resulting photograph using the term, "HDR."

4.  While Amazon clearly owns the technique for creating images with white backgrounds they failed in their submission to extend their patent to the creation of images with color backgrounds and we were able to swoop in and lock that puppy down. The patent application is far ranging and includes the colors, red, yellow, blue, green, magenta, cyan and black. Or any mixture of these colors to create any other colors. We refer to this beautiful piece of legal work as "our money maker!"

5. You'll never believe this but while some camera straps are protected from being copied by pending patents no one has filed a patent for the actual use of a strap to suspend a camera from a human. Or animal, or "other."  Well, now we have. So whether you use a logical and straightforward strap to carry your camera, suspended from yourself, your heirs or your assigns,  or whether you use one of the camera-killing sling straps with a single attachment point that holds your precious camera in an inverted orientation,  you are now more than welcome to own the strap, and even argue the merits of each design but you will need to apply for a license in order to use said strap in the aforementioned manner. We're "pending" right now but with ground breaking precedence from Amazon it's really only a matter of time before we start a whole scale campaign to hunt down infringement on a mass scale.

6. Finally, we are attempting to get a patent for the use of tripods to provide a steady base from which to shoot images with a still or video camera. Now, just to be clear, it would not be an infringement to own a tripod or to even attach a camera of any kind to the tripod, but using it to provide a support during the shooting process will require a license. It's not the camera or the tripod themselves that are subject to this patent, only the intermixing of said articles in the pursuit of sharp photographs by application of photography while so attached.

That's all we have for today but we are branching out. In the spirit of the Amazon patents for the white background we are looking into social media such as Twitter. While we can't patent the writing or sending of 140 character messages we may just be able to secure the patent for the actual reading of said messages on any sort of transmissive screen. Messages printed on paper fall outside the parameters of the filing but transmissive screens? That's a whole other ball park....

And would you believe that we just discovered that no patent currently covers the design and construction of baseball parks? Ah, the U.S. patent. The gift that keeps on giving for major corporations. Join the fun! What every day thing can you patent?

Posted by Kirk, Photographer/Writer at 15:55 3 comments: