Thoughts While Finishing up a Project and Getting Ready for the Next One. 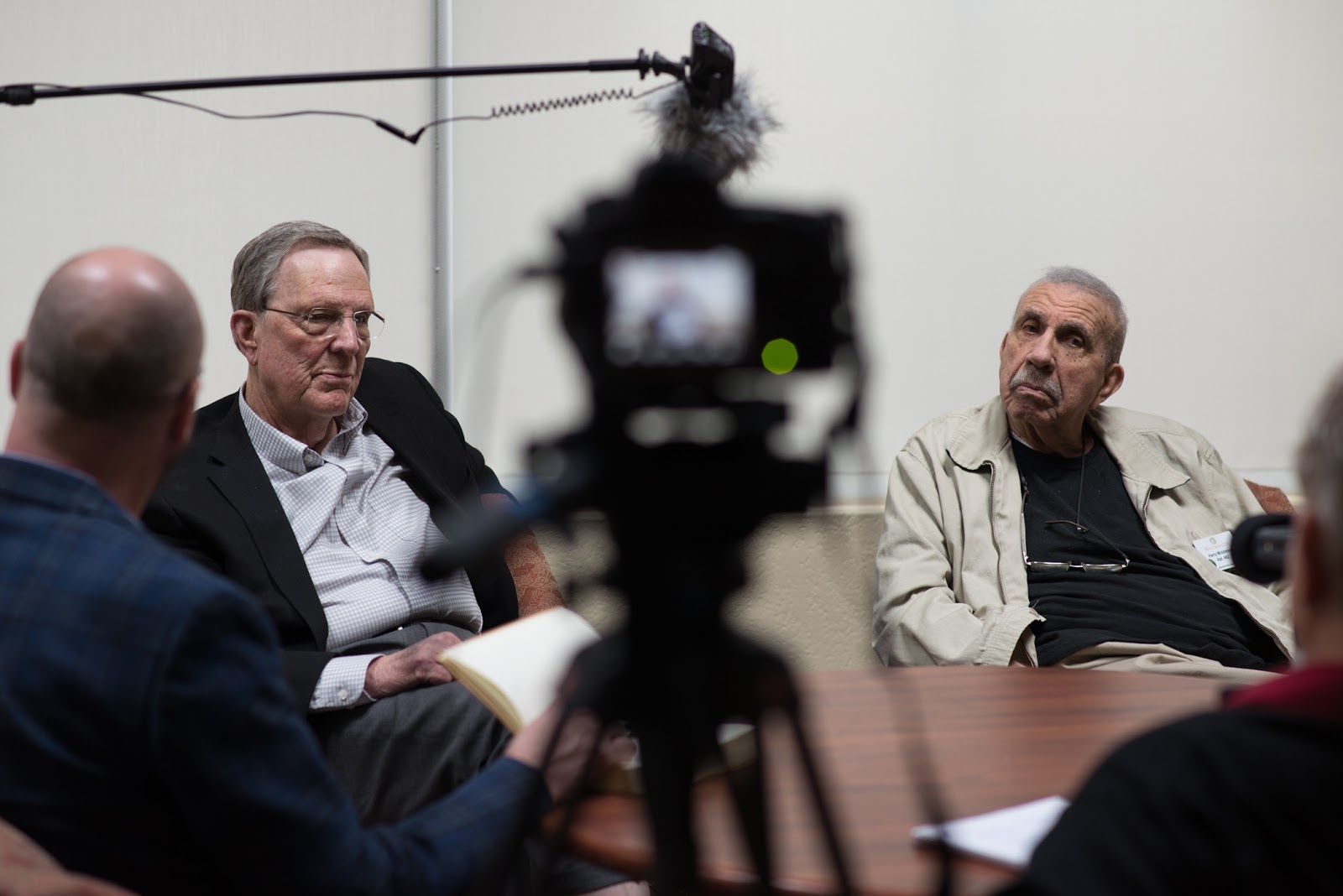 From: A series of interviews about LBJ.

When I read about an epiphany of one photographer or another in regard to their newly found love of video it always seems as though the protagonists need to disavow traditional photography in order to sally forth on their new moving pictures quest. It's almost like everyone needs to mythologize a mystical transition in which they are moved to discover a higher power of communication. A creative growth spurt. These new Jedi Masters of video talk in terms of framing things beautifully; of capturing the beautiful light; of using the images to tell the story. Yawn...

The presumption that clings to these epiphanal transformations is that everyone who makes the journey has started out as a still photographer and have only just made the jump to video since the days of digital made everything possible in a camera of which one already had possession. The shorthand conceptualization seems to be that the new practitioner has made the jump from one liners to, at least, fully fleshed out essays. And that's where I have a problem.

I have never really considered myself to be a visual person. My early impulses to pick up a camera were not because I felt something artistic that needed to be examined and shared but because I had a series of beautiful girlfriends whom I needed to photograph as a way of making notes for future story ideas, a cataloging of virtues. It was a way of remembering details that less lazy writers may have accomplished just as well with a stack of notecards.

When I worked in advertising I wrote advertising copy. Our agency was fairly small, only 25 people or so. That meant that I was pressed into service writing not only magazine and newspaper ads but also television commercial scripts and radio commercial scripts. My early training with motion was in the service of advertising. In those days (and maybe to this day) the writer went along on the production of TV commercials in case a quick script change was needed. Or in case a clarification was required concerning the creative idea.

Writing commercials and then supervising them became a circular learning opportunity. You learned what dialogue rang true and you learned how well, or poorly, your creative ideas translated into visual plays. In the 1980's we felt the need to get stuff just right either in pre-production or during rehearsal for a number of reasons. The primary reason being that 35mm or 16mm film stock,  along with development, cost real money. Every minute of shooting required crew, and investment in spoilable, one time use, resources. We would actually mould and re-mould the stories we were trying to tell as actors read the lines. It was the language that mostly drove the commercials. The concepts bolstered by the words...

Sometime in the last two years I made a somewhat conscious decision to circle back into motion productions. Video. But I have to confess I don't see things in terms of great shots or wonderful transitions or beautiful light. I see faces and emotions and expressions and I free associate about each person's backstory or the story of the character they are playing in the moment. For me it's about the relationships, the nuance of personality and the interplay. Not the beautiful frame or "the story."

It's both a handicap and a blessing. I think I have to work harder than my peers to cobble together a pleasing frame. In the same way I am constantly trying to learn how to better compose stills when my natural intention is just to center everything up and spend every moment watching the eyes and the expressions of my subjects. I envy (to a limited degree) the people who seem to be able to relegate their subjects to the status of visual elements. But I seem incapable of doing that, just as I am incapable of the invisible mental tactic of composing in thin air for a square or specific crop and then duplicating the same thought during the post production.

I've circled into video and yet I find myself captivated by the experience of the spoken word and the script, and the actors' interpretations of their scripts, to a far greater degree than I am drawn into the look or the costumes, or the styling, or framing up the shot. Lighting to me is an accessory to story telling. It sets the mood and is part of the creation of the mix of expressions and intellectual or emotional intensity that moves a visual play forward. My eye doesn't linger on the great shot.

There is one reason I like to shoot video at least as much as I like to shoot still images. That's because the video gives my mind action to follow while a still image allows me to stop, linger and then move on. The video moves through time. The still resides in memory.

Both skills have their value. The photo makes a direct tattoo on the memory (if it's any good) while the video entertains the mind (and the more basic emotional responses) but the story trumps the imagery. Even if the imagery is beautiful.

Today I tried to edit a video that had no narration or on camera speech. No words. No sounds. The client will use it at a huge, noisy trade show and the sound was deemed to be un-useful. The client requested that we just cut the whole project as a silent, stand alone piece. A series of interlinked images moving through time; selling a product or a combination of products. I don't know why but the silence paralyzed me and left me a bit bewildered. I grabbed a lively bit of music and put it under the video time line. Once I had a rhythmic beat in place I could figure out the way the video should be cut. I figure I can always throw away the music bed when I deliver the final, approved video.

But my paralysis made me realize that the brain has to be satisfied over time, in a different way, to create images that move. Being a writer makes video more alluring because it makes use of narrative and the passage of time; same mindset as writing. Being an (admittedly) unstructured artist makes video less alluring because it requires a structure and an attention to detail that I seem to be better suited marshaling in distinct spurts. Like the making of individual photographs. And all at once I feel like I am stuck somewhere on the middle of the continuum. Not in one camp or the other. Not I ever have to make a choice. It's the burden of being enamored of expressions and the promise of back stories in a world that values the perfect construction and lots of sparkle. Darn.

Posted by Kirk, Photographer/Writer at 21:25 10 comments:

There's nothing wrong with a tripod addiction as long as it serves the work. At least that's my rationalization... 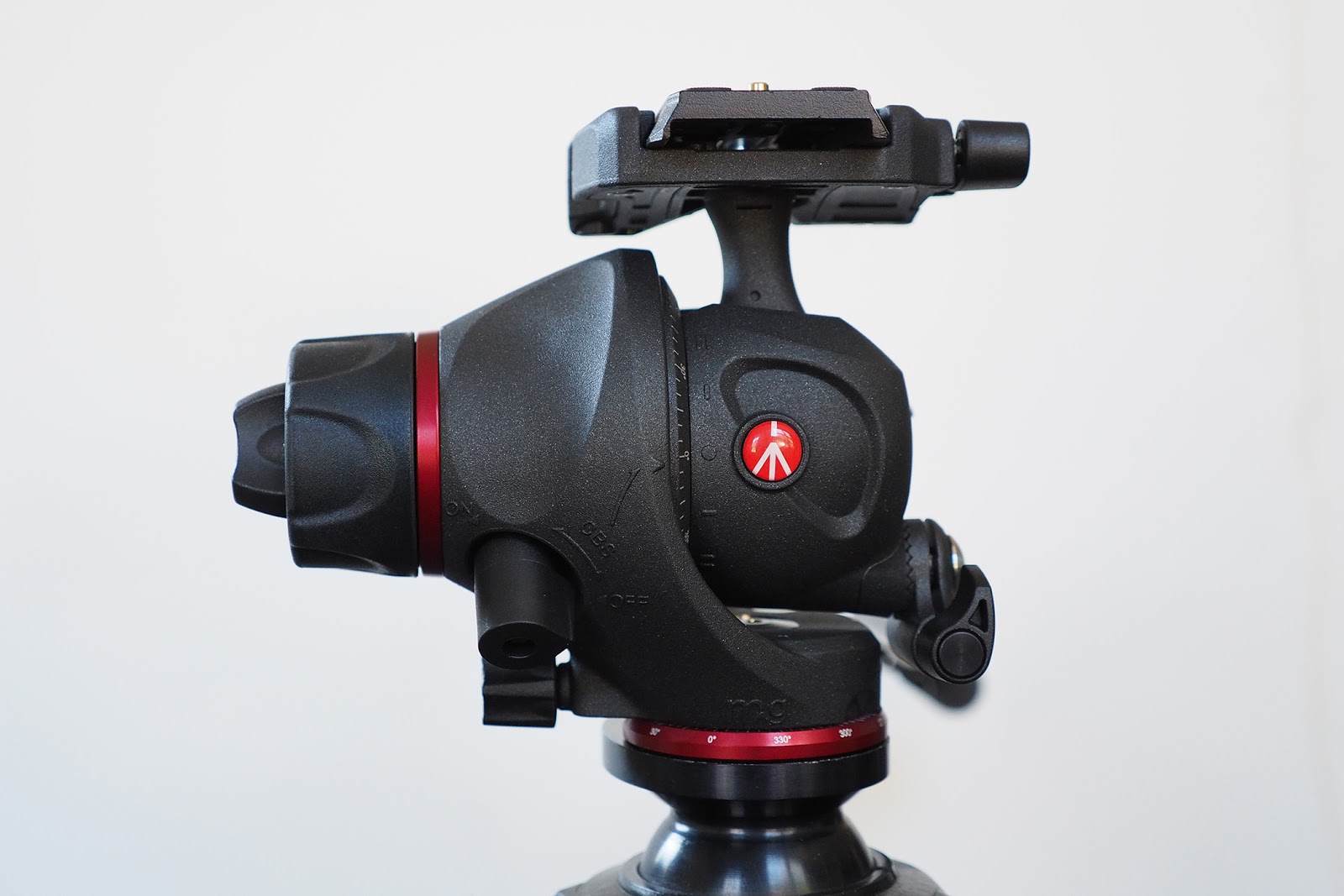 Last week I got rid of four tripods. One got donated to a younger photographer and the other three sacrificed themselves in a trade deal. But that certainly didn't impoverish the inventory at the Visual Science Lab. Don't worry, we still have one set of sticks for nearly every day of the year. And we use them. When we only shot still images life was easy and breezy. Using a big, fat camera and a huge lens? Grab the huge Gitzo with the five pound, dual axis head on it.

Shooting a pixie camera? Grab one of the smaller tripods with some sort of sexy ball head on the top and get after it. Shooting with an Olympus OMD EM5/2? Just leave the tripod in the cage. (Had to get that in...). But what tripod do you take with you when your lovely clients hires you to shoot some great video (smooth panning, smooth tilting) along with some great stills? What if a fair number of those stills are verticals? It's an important question because nearly every video fluid head on the market works only in the horizontal configuration. Not vertical.

Two things came up recently in the business. One was a client who wanted to shoot video in a vertical format to present on 50 inch, vertical screens. The second was a shoot the required a mix of still images (including vertical portraits) along with conventional video. I did my research about shooting vertical video and was about to buy an L-bracket when (fortunately) my client changed their mind about the virtues of verticality. But the second shoot continued on in it's bi-directional reality. I brought along two tripods. One with a ball adjustable, conventional video fluid head and one with a conventional, still photography ball head. What a pain in the butt. The mix of verticals and horizontals was throwing a monkey wrench into the whole idea of "hybrid" content creation, or what K5600 Lighting refers to as: "Light once, shoot twice."

Once I had the post production from that shoot out of the way I went out looking for a convertible head solution to the two tripod tragedy. I found one that I think will work well in the form of the Manfrotto MH055M8-Q5 head. It's a fully functional fluid head with very smooth, variable pan drag and lovely tilt controls along with firm one handed locks and even a spring balancing option. There is switch that allows you to go from the video/conventional horizontal setting to a photo setting that lets you move the bullhead in all directions, just like any other bullhead. The cost of the head is around $365 and can be used with a conventional tripod connection (flat platform) or with a ball attachment on a video tripod. The way I bought it is with the flat bottom. I already have a ball rig for a different head that fits just right. But for now I am using it on a big, Berlebach, wooden tripod that has a built-ion leveling ball as part of its design.

I've practiced with the video movements using a Nikon D810 and a 80-200mm f2.8 lens and have found it to be very well behaved over the range of all its controls. A full evaluation takes time but I thought I'd let you know that this is out there in case you are in the same boat and trying to juggle two sets of requirements for camera stabilization on one location shoot. This is one that works well.  So far nothing negative to report. 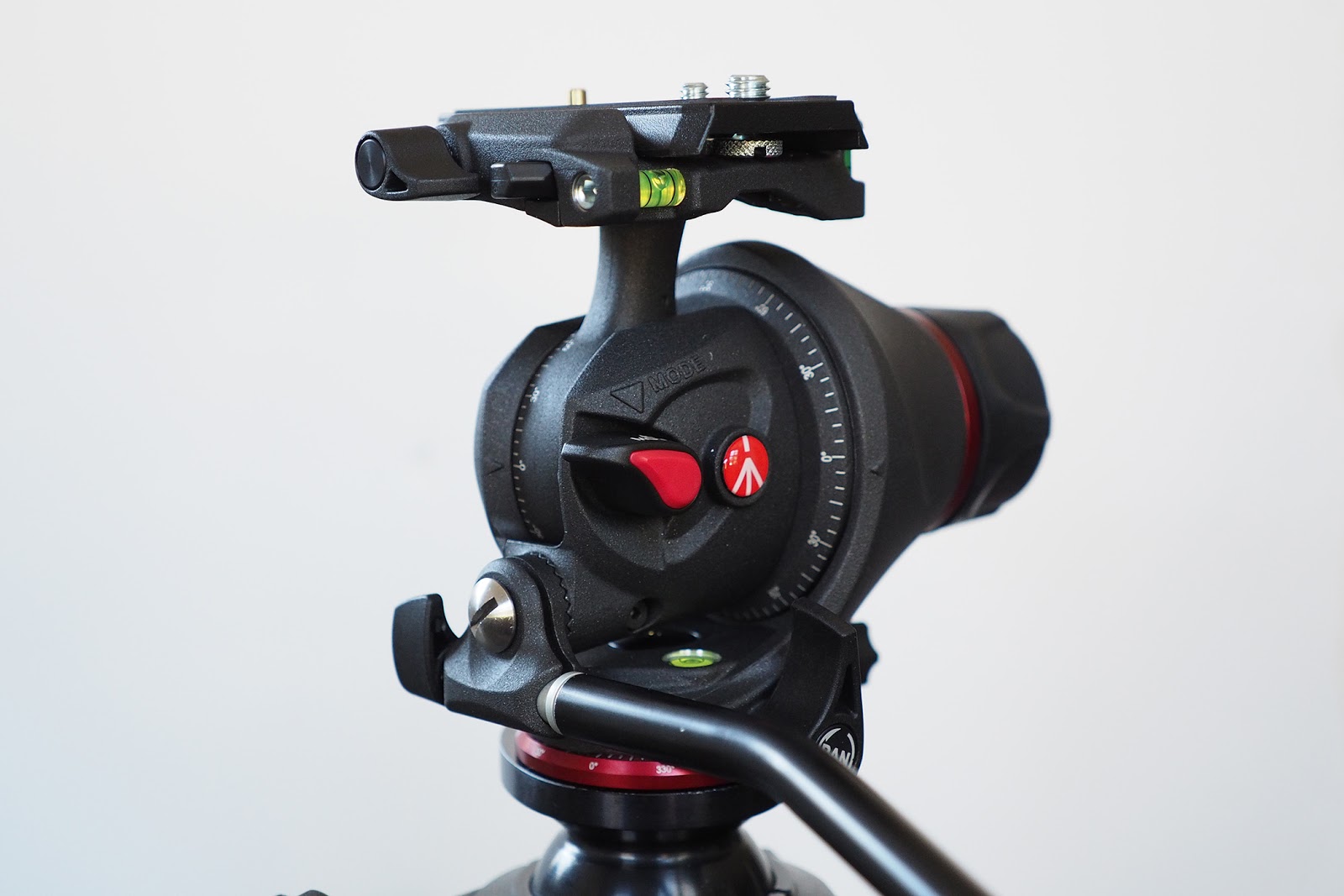 The head has three tripod levels and the tripod has one of its own. Talk about
"level headed." 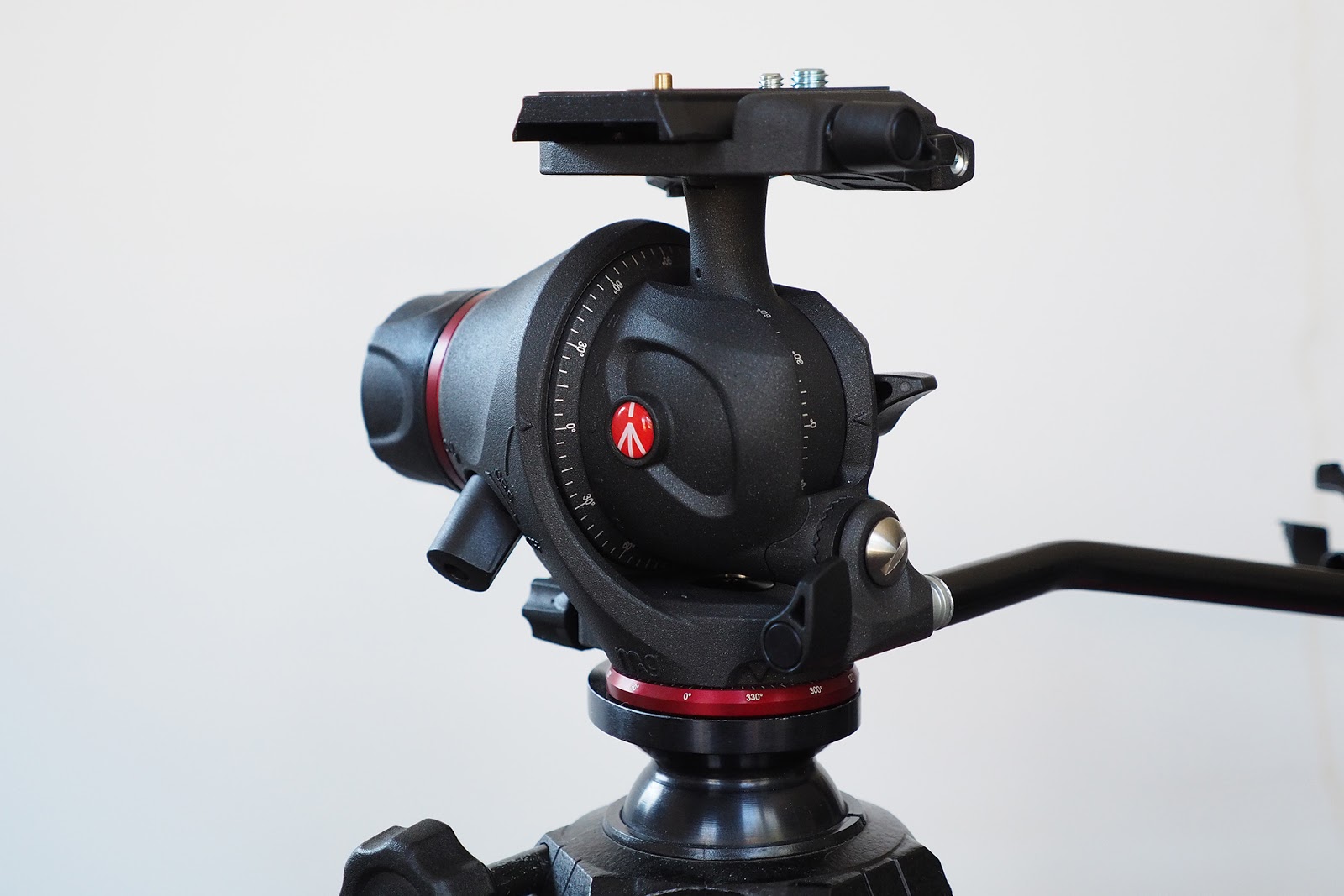 The pan arm is removable and can be switched to the opposite side for all of those right handed people out in the world.

The KPSI (knobs per square inch) on this head is high and should appeal to people who like a wider range of control and the visual appeal of....knobs.

Posted by Kirk, Photographer/Writer at 13:04 6 comments: