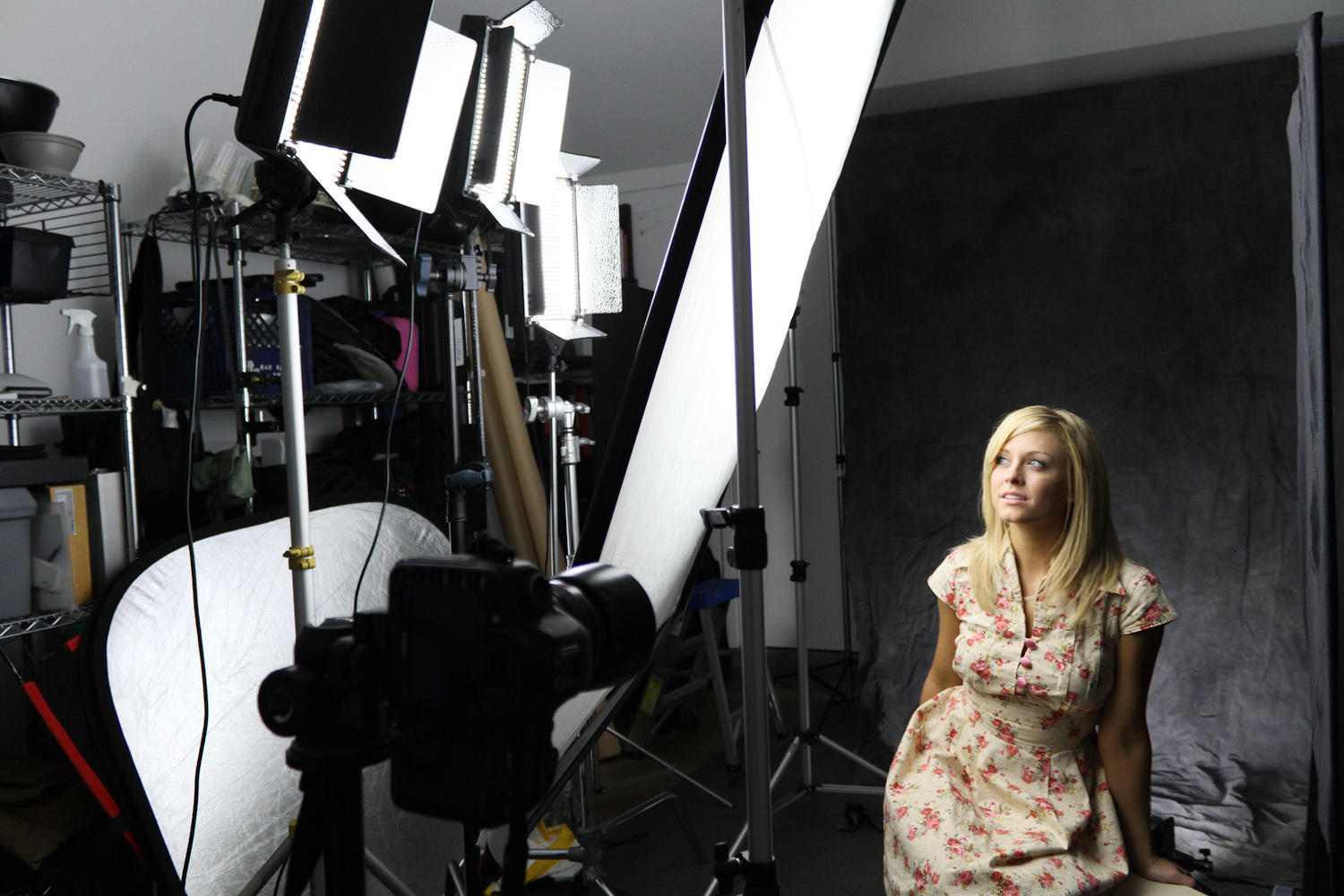 Back in 2011 I wrote a book about LED lighting for photographers. Even though LEDs were more expensive and less efficient (and well color balanced) back then I was pretty sure they'd catch on. Four years down the road I'm on my third or fourth generation of LED lights. I am finding them more and more useful all the time.

I recently photographed 20 people during a day of making images for a law firm. We were shooting on a rainy and overcast day and the building in which the law firm was housed sits right in the middle of Austin's downtown district.

I was making portraits of people in offices with the shapes and textures of the city softly rendered outside the windows. A cityscape background made soft and somewhat surreal by the combination of aerial mist and quickly diminishing focus from the f2.8 setting on my 85mm lens.

The light in the offices (with the regular office lighting extinguished needed to be supplemented. I brought along three flashes but I also brought along five LED panels. Four of the 312AS lights and one of the 504AS lights. All of these units are marketed by Fotodiox and all feature the ability to adjust color temperature and output levels. I used the big light diffused through a 1/2 stop scrim for my main light and used the smaller lights for fill and accents.

None of this would have worked on a sunny day. It it had been a brighter day I would have defaulted to the flashes and some umbrellas. But luck was on my side. The constant light source was a blessing since a lot of the people being photographed were nervous in front of the camera and a fair number told me that they were habitual camera blinkers. Not having the flash going off and cueing them to blink was great. The subjects were amazed when I would tell them that we got twenty or thirty great shots without a single blink.

In the same week I used some of the small LEDs for a video interview and I used the large LED to supplement ambient lighting for a video slider shot in a lab. One evening we had a power failure  here in our neighborhood, which is an extremely rare occurrence, and I brought in a case of the LEDs from the office and placed them all over the house. They ran for hours on their batteries and were still going strong when the power came back on. Later in the week I agreed to photograph a doctor here in the studio that had a tough schedule and needed to make his appointment with me after 9pm.

We're in a residential area that doesn't believe in street lights so I wanted to make it easy for the doctor to find me in the dark. I put one LED on a small stand to light up the house number on the mail box out near the curb. I used another two lights to sweep the drive way with light and I used one light facing the studio to light up the small building's exterior.

The doctor honed in on the location like an airplane following landing lights.

I don't know if you've started to experiment with LEDs yet but now is a good time to start. Especially if you are interested in video production. The panels are cheaper and more consistent than ever before and the color just keeps getting better and better. With a good low light camera like the Nikon D610 it's almost as if there is no downside to their use. You won't freeze fast action with them but you can light up a portrait really well.

When I look back at how big and primitive my first set of LEDs was I am pretty amazed at the progress the lighting industry has made. I just checked out the latest from Fiilex and I am convinced that if I have the budget I'll be making some additional investments in their products. Especially now that the big 500 series light is available. It's very clean and pure and kicks out the equivalent of a 750 watt tungsten spotlight. So very cool.
Posted by Kirk Tuck, Photographer/Writer at 22:08

About two years ago I bought one of the cheapo models for $60 to see what the fuss was about. It wasn't powerful enough for the photos I wanted to take. The LED went into the closet and was forgotten for months.

Recently, it has found new life helping me with house projects in the bathroom, garage and even front yard. Throw in six Eneloops and it lasts for a long time without running hot like my task light I got from Home Depot.

Looking online they are selling more powerful lights now with color controls for the same price.

Kirk
I have recently been researching small LED panels suitable for carrying into the mountains for filming nature.
I discovered the TCLI index, and the revelations about poor spectral performance of some LED panels from well known manufacturers.
http://www.gtc.org.uk/tlci-results/tlci-results-new-format.aspx
I am also acutely aware of the difficulty of getting the right colours when using daylight at high altitudes.
Or even, when indoors, balancing daylight from North and South-facing windows.
I wonder whether the new Sekonic C700r colour meter might help with these problems.
Post processing never seems to cope, so I want to control colour at capture.
Getting the colours right for flowers, butterflies etc is quite challenging.
Would you be prepared to write an article on this subject?
Best wishes
Goff

I for one have started experimenting with LEDs but I haven't embraced them 100% yet. I don't think I'm quite ready to do that yet.
Like you said, they're getting better and better, which also means they're still somewhat immature a technology compared to some of the older ones that have been pretty much the same for a long time. Unlike most LEDs, especially the more affordable ones.

You still need to pay quite a lot to get LEDs with a (close to) natural spectrum of light at all power levels, and the next year's model may still be clearly different from today's model. Talk about your ROI... I'm exaggerating a bit to make a point.

Yes, of course, the LEDs do have some very obvious benefits, and I do understand it's also a workflow issue. I do believe they are likely the future, and I am using some myself, too.
But before I wish to start investing heavily on the very pricey high end models to replace all other light sources with them, I think I would still like to wait for a yet higher a level of maturity and standardisation. More natural light.

In fact, I'm looking forward to strong, 'next generation' LED panels with a natural colour spectrum that could replace both flash lights and other continuous light sources. Not only that, but probably some of the modifiers, too.

Maybe that's a matter of personal preferences and/or budget, but that's my 2c on LEDs, for now.

PS.
Even if/when LED panels soon take over the world, I think I'd still like to have at least one traditional Arri fresnel light some day, just for the coolness factor. :)

I will say that as far as color and spectrum go the Fiilex line is close enough for me. I've found nothing that isn't easily correctable about their lights.