Some food images shot with the Olympus OMD EM5-2 in the high resolution mode (40 megapixels). Shot at Cantine Restaurant in Austin, Texas. 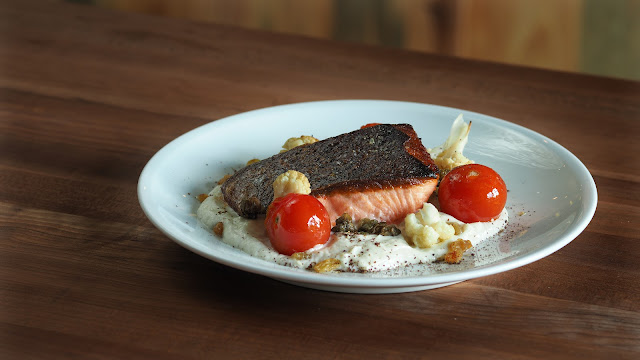 My friend, James, and I have been working on a video for an Austin restaurant's website. We shot lots of kinetic footage on our first day, both using handheld EM5.2 cameras and a box full of different lenses. Our footage, while technically similar in terms of color palette, etc. couldn't be more different stylistically. I stay on scenes longer and I shoot more conservatively. He shoots with much narrower depth of field and moves quickly. In the end both styles work well together to moderate the whole piece. The second day we went back so I could shoot high res stills of some of the food while James shot video of the same set ups.

I felt that I had recently mastered the hi-res feature in the camera so I chose to use it for all of the non-moving imagery. I switched back to normal settings when shooting subjects like the "wine pour."

As with the first day of video I brought along a box of lenses for the cameras. Some were older manual focus lenses from Pen FTs while some were newer. The most used lenses (by me) were the Sigma 60mm, the Panasonic 12-35mm f2.8 and the 40mm f1.4 Pen FT. James seemed drawn to longer focal lengths and shot with stuff like the 70mm f2.0 Pen FT and even a Nikon 105mm f2.5 ais.

I went back again today for lunch and had a great meal with my super-tech friend, Amy. She's an electrical engineer and it's a joy to understand the latest technology through her eyes. As we were having lunch I was watching out of the corner of my eye as another photographer and his assistant came through the door to shoot the food and make a little slider enhanced video.

Their methods, location selection, etc. were much different than the ones I made but I guess that's what makes this job so interesting...

At any rate, here's the stuff we shot on our afternoon of food photography: 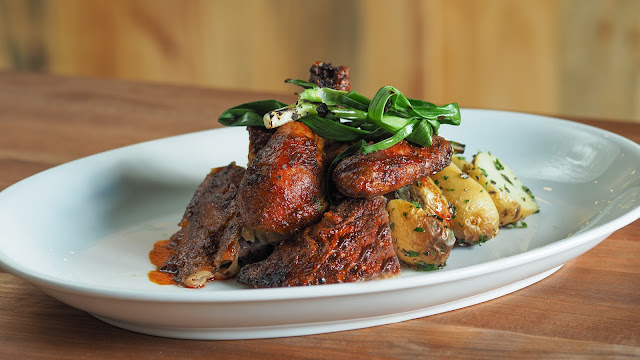 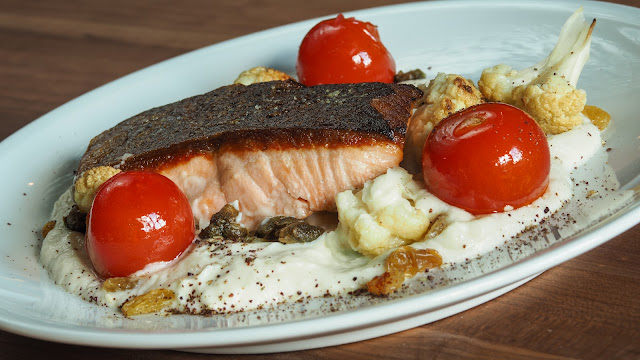 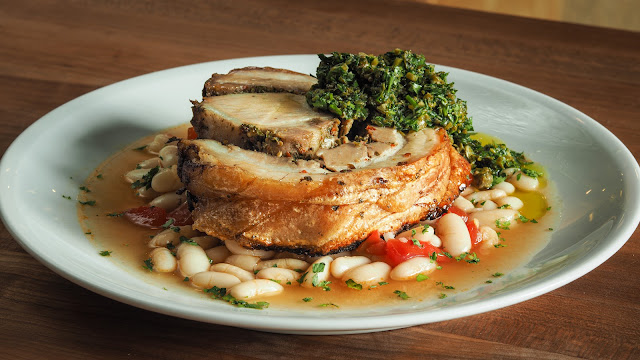 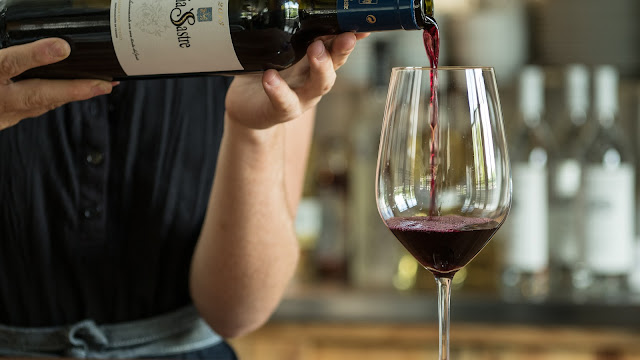 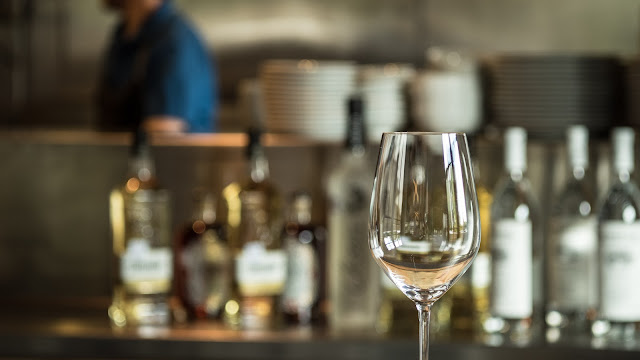 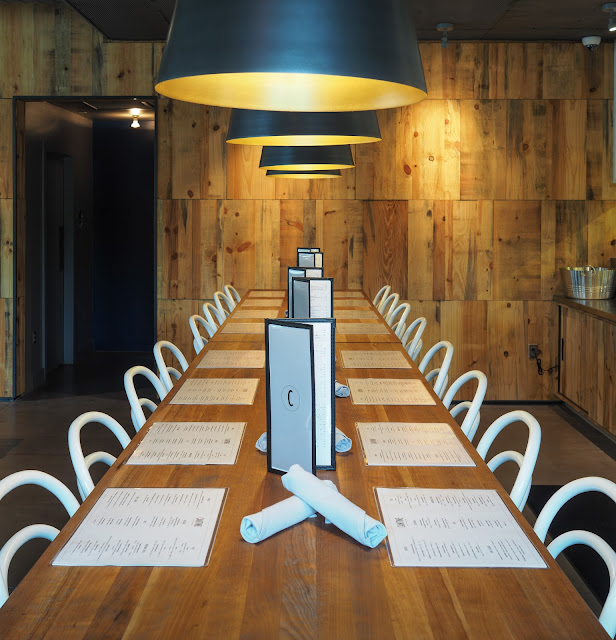 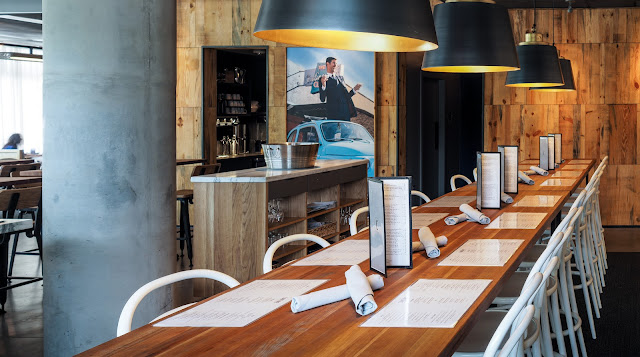 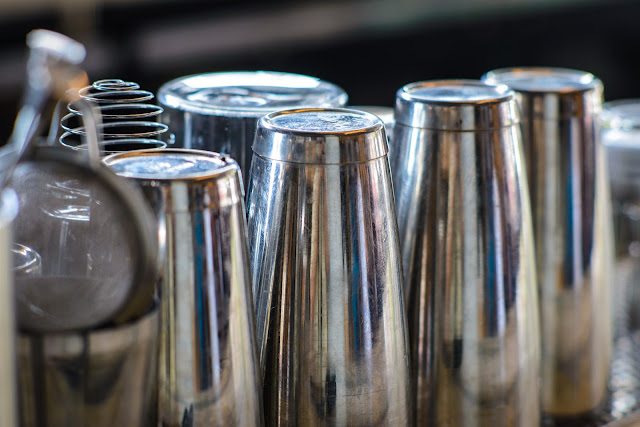 Cocktail shakers at the bar. At the ready.

Used in the high res mode the colors are exemplary and the endless detail makes post processing a breeze. I'm warming up to the EM5.2. I can hardly wait to share the video with you and am amazed that you can now buy such a talented camera for only $900.

The world of work is changing with every new toy.

Panasonic announces a new camera that might make m4:3 users upgrade. It looks great on paper, with one exception.....

What's not to like about the latest announcement from Panasonic? It popped up on my radar this morning because the announcement is all over the web. Here's the main stuff we like: The body style is super groovy. Very retro and aimed at photographers who are nostalgic for the cool, self contained, rangefinder style cameras of the 1960's and 1970's. The EVF is one of the new, high density internal screens that provides something like 2.6 million pixels to provide a detailed finder image. The camera  features Panasonic's respected 4K capabilities and it should be a very decent video camera. The thing that most people will be excited by is that it's the first micro four thirds camera to feature a sensor that provides more than 16 million pixels. Thom Hogan reminds us that the scale up from 16 to 20 million pixels only gives us 13% more resolution. Pretty sure that's not going to make a huge difference but then again, you may be one of those shooters who needs every last pixel for some giant prints.

The camera is a bit bigger and bit heavier than its predecessor, the GX-7, but I think that's a good thing on both counts; more space to lay out buttons and give our fingers a bit of relief space and the extra weight will probably mean steadier shooting.

The camera has built-in image stabilization but it goes one step further (when using Panasonic lenses that are so endowed) by using the I.S. in the lenses at the same time. Apparently the combined stabilization from both body and lens makes for a steadier image than either method used individually. I can only imagine that combining the two is a direct result of the inclusion of a much faster processor that can do the math required to optimize both sets of moving parts in tandem. Seem Moore's Law keeps improving cameras in a way that is different than just stuffing more pixels on a die.

So, better finder, better I.S., 4K video, more resolution (and presumably the same or lower noise!) and better handling all add up to a mature and potentially delightful new imaging product. What about my caveat in the headline?

It's not really that big of a deal but when I read through the specs I see that, while the camera has a port for the use of external microphones there is no port for headphones with which to monitor said external microphones. That instantly relegates the GX-8 to Fun secondary art camera for me. But the omission isn't a big deal if you never really intend to do much video or if you are happy shooting double sound with an external recorder instead of using audio that comes directly into the camera.

I think the camera is quite handsome and I'd like to have one in the silver finish. It looks very much like the Company's L1 (See DPR for illustration and review), digital 4:3 camera from about eight years ago. I handled that camera and liked its ergonomics as well.

If one were transitioning from a massive DSLR this might make a good choice for a first, higher end, foray into micro four thirds, but the equation is much different if you already own current Olympus products. Switching to the GX-8 as the primary camera would be scary since Olympus must surely have something new up their sleeves such as a revision/upgrade of the OMD EM-1. Remember that the launch of that camera happened during the October Photo Expo show nearly two years ago. Seems like it's just about time for something new to come out.

I'm hesitant to buy a GX-8 until I see if Olympus leapfrogs them again with something special. Choices, choices.

I wonder who will be pre-ordering this one?
Posted by Kirk, Photographer/Writer at 11:12 8 comments: