The "Wall" as a counterpoint to the wonderful blue of a wide angle sky. 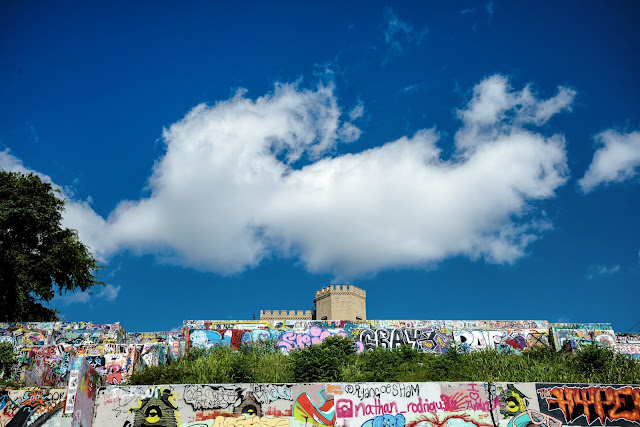 I am posting lots of pictures instead of words because I think the period of my technical relevance is waning. Everyone is already an expert in everything having to do with cameras. All that's left is to do the art.

I love paths that curve and arc. This one runs down to the Lamar Blvd. bridge.

When I started the blog back in 2009 there was so much to write about. Photography appeared to be growing by leaps and bounds and there was a seemingly insatiable audience of people who were anxious to learn whatever they could about photography. And lighting. And the business of photography. Now it feels like we've lived through the upper curve of a sinusoidal wave of interest and innovation and we're heading for the inevitable trough.

I looked back today at some of the things I've been writing about, like micro four thirds cameras and electronic viewfinders. The push back, in our comments,  from most people doing photography at the time was pretty remarkable. Everyone assumed that we'd continue with the status quo and live on a rich diet of incremental DSLR improvements. Everyone assumed that pros would always use Canon and Nikons. They also assumed that we'd always be using optical viewfinders. To read some of the comments back then one would think that the inclusion of EVFs on good cameras was the work of satan.

But the photo world has matured, flattened and become fully researched and rationalized. I'm sure most people reading this have handled most of the same cameras I have. Most have paid more attention to the owner's manuals than I have and most can tell you all the shortcuts you can implement with various function buttons on your new cameras. Which I cannot.

Although very few of us are engineers or scientists here there are many discussions all over the web about technical aspects of imaging grounded in high physics and arcane optical theory. Even my dentist and my lawn guy love to wax on about "micro contrast" and "noise floors" and "shot discipline." If I need to understand how lens designs create optical signatures I need go no further than to the woman who cuts my hair to have a full on discussion. Sensor technology? I go to my barista for that.

But the sad thing, at least for me, is that when the internet has succeeded in gifting us all with the same knowledge and the same proxies of experience then there's not much else to really discuss besides whatever new product is lurching through the gear pipeline (which we mostly want but mostly don't need) and the actual photographs that we take. All the other stuff we used to talk about is instantly redundant because the minute it is written and published by anyone it diffuses into the marsh of general knowledge like India ink in my glass of sparkling water.

I wish I had a willful lack of self-awareness because I could have monetized what I know through a series of mostly meaningless workshops. Entertainment thinly disguised as photographic workshops....

But really, all I have to share is my own work and my views about how I do the work. And the last thing I would recommend here is that someone slavishly copy my methodologies since they are not really well founded, technically,  and are certainly suspect aesthetically.

We are mostly technocratic males here and it would be healthy if we could all just meet face to face for coffee or beer. We could talk about so many things that are more comfortable and information rich than just what lens to choose to take pictures of that intense red fire hydrant against the rich green carpet of grass spreading out behind it like a.....green screen.

But most of us will only meet here. And even sadder than the homogenization of subject matter is the understanding that most people love what they, personally, shoot and are indifferent to other people's work. Maybe talking about them "shootin' irons" is easier and more fun because it is surrounded with the excitement (as in gambling) of risking large sums of money.

People repeat the old saw of being tired of the endless discussion of gear, gear, gear but the statistical reality of blogging is that every gear post here out pulls every post about aesthetics by a factor of nearly 10:1. For those few non-math majors here let me say it like this: If I put up a post about making an image or having an experience making an image (and that post doesn't concentrate on cameras and lenses) then about 200  people will click on it and read it all the way through. But if I put up a post about the new version of an old, but popular, lens about 2,000 people will read it in the same time frame. To really goose readership all one has to do is write a controversial review/editorial on a popular piece of Olympus, Canon, Nikon or Fuji gear. A mirrorless versus DSLR piece is also a sure bet!

If I could make a reasonable argument that the Fuji XT-1 is a piece of garbage and everyone shooting with one is delusional and certainly will never make art with one, I might be able to scrape up fifteen or twenty thousand readers in the same time frame. (Sorry, can't really make that argument). So even though everyone gets all high horsified about relentless gear posts ("tut, tut, let's talk about the art...") they are like a cigarette smoker who professes trying to quit. They denounce the drug and then step outside "just this once" to light up.

The sales numbers for gear are illuminating. The market for cameras tanked hard, and I think it's going to tank even harder this year. It's not because ardent photographers have embraced phones with cameras it's because huge numbers of ardent photographers have moved on to something else. Their interest crested and plunged. When a market troughs there's nothing to do but ride it out and enjoy actually doing the craft instead of talking about it. Even if that's not nearly as much fun...

I think everyone here knows that I am a commercial photographer. The market is currently better than it's been for years. Some sort of inverse relationship between the popularity of the hobby and one's ability to charge for it.  I intend to keep writing the blog from that point of view and showing what I am working on and what I am interested in.

I sound like broken record lately, vacillating between Olympus EM5.2 cameras and Nikon's traditional DSLRs, but the reality is that's my current focus and I'm not anxious to rush out and buy or borrow new stuff just to satisfy our collective need for a geardrenaline rush on a weekly basis. Maybe part of the reality of the craft right now is about settling in with what we have and doing actual work. Wouldn't that be novel???

Posted by Kirk, Photographer/Writer at 16:17 27 comments:

I was walking along, writing things in my head, when I saw the clouds playing with the street lights. What a lovely sky! 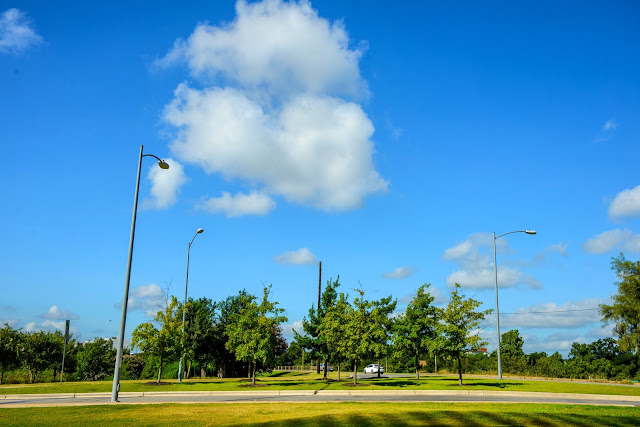 Posted by Kirk, Photographer/Writer at 15:19 5 comments:

More images from a walk through the park with a nice camera and an old lens. 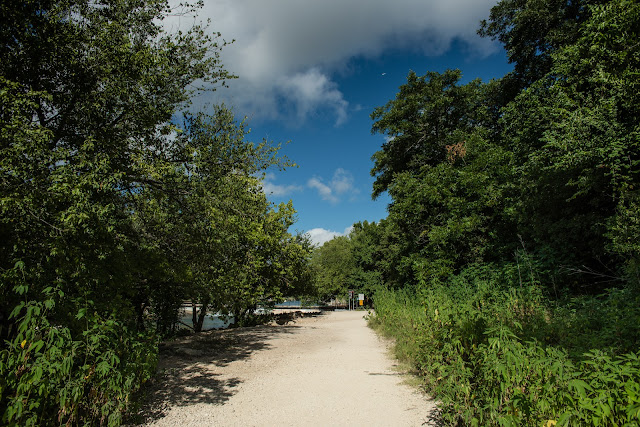 This is one of the trails that leads to the Barton Springs Pool.
To the left is the stream that connects the pool to
Austin's Ladybird Lake. 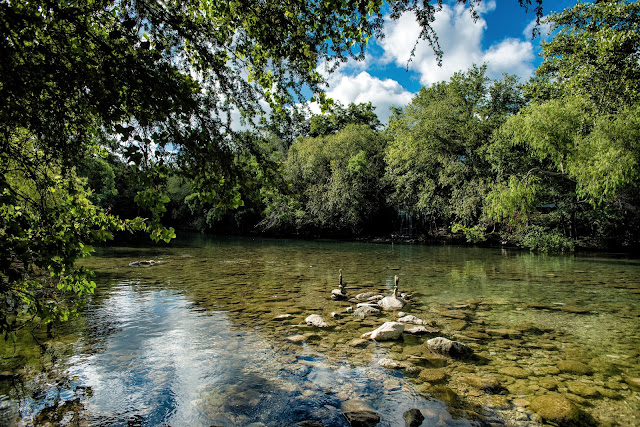 At various places along the stream people sit in the cool water
and while away their time making balanced rock sculptures
from rocks they find on the bottom.
The water is always cool. Mostly 68 or 70 degrees (f).
At the other end of Barton Pool it comes bubbling up from underground. 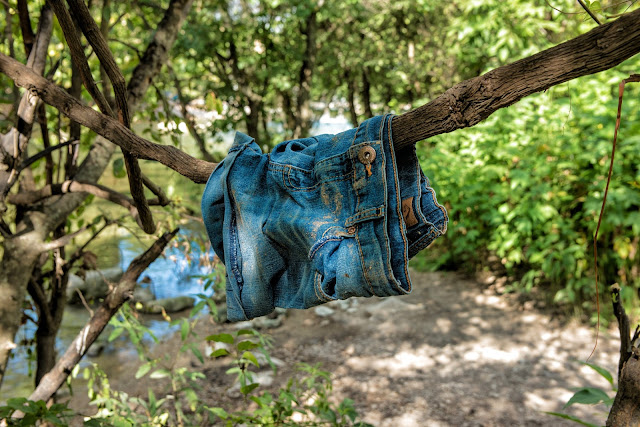 People who pay admission to the pool usually keep their clothes on.
People who swim in the stream instead are less likely to do so... 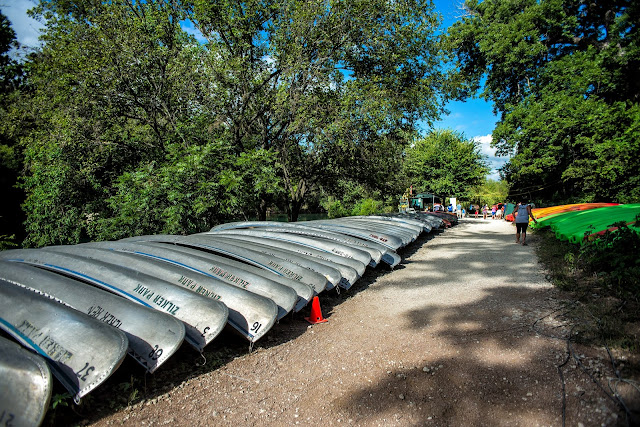 In the morning there are many canoes at the open air canoe rental shop.
By noon on a hot day there are none left to rent. 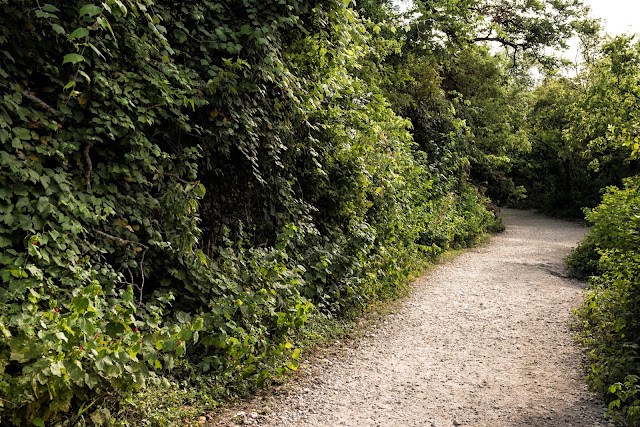 This is the trail that leads away from the pool toward downtown.
We have miles and miles of trails around the waters that flow through
our downtown area, most covered by old and new trees for shade. 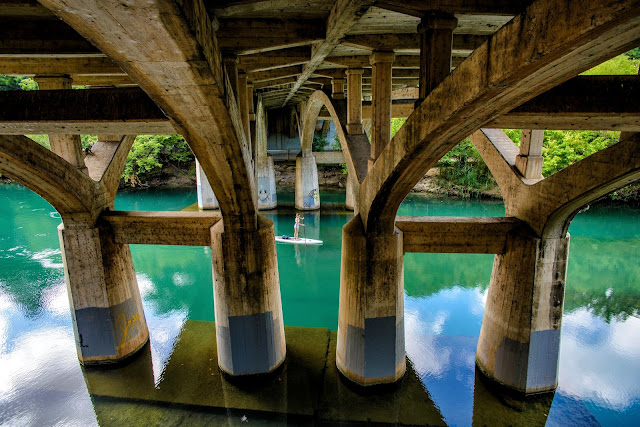 This bridge takes traffic over the creek on Barton Springs Rd.
On a hot afternoon paddle board people and canoe-ers glide under and linger for
respite from the powerful sun. 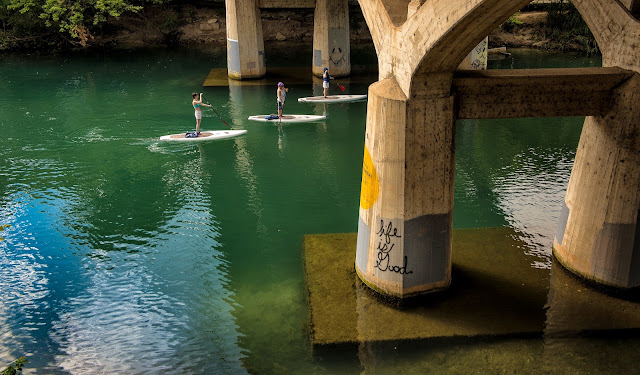 I walked all morning and on the way back to Barton Springs and my car I saw hundreds of
fit, young people paddle boarding, canoeing and running through the park.
It certainly gives weight to the graffiti on the column in the image above.... 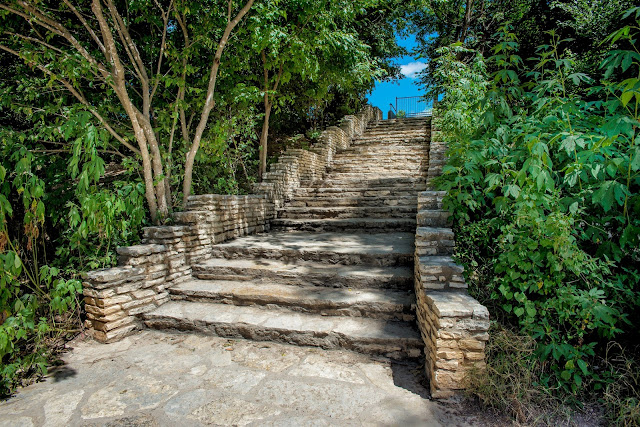 These stairs lead down from the running trails that interconnect around
Zilker Park to the pool at the north end of Barton Springs Pool. It's area that
people frolic in when they don't want to or can't pay the $3 admission to the
big pool.

Lovely day for a walk.

Posted by Kirk, Photographer/Writer at 15:16 2 comments: