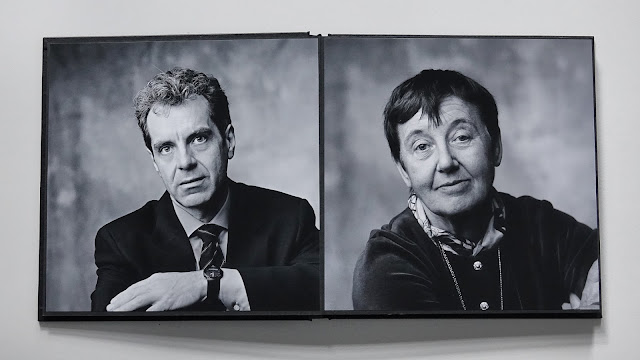 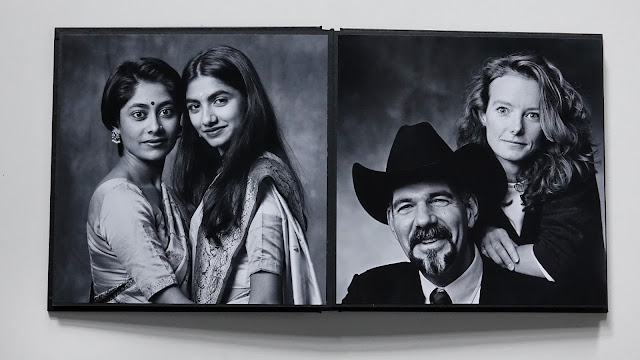 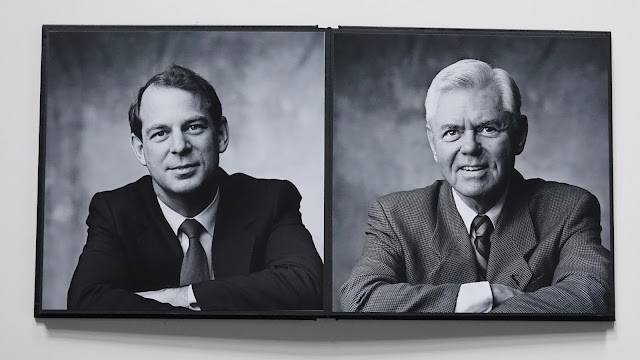 You can talk a good game but at some point in the creative process the people with the checkbooks are going to want to see your work. Sure, you can send them to your website and they can look at your work on their phone. If you're lucky they'll have their laptop handy and then they can see your work on a 13 inch, coffee-spotted screen with lots of glare and reflection layered over the top. Just what you need in order to show off the nuances of your incredibly detailed technique, right?

Or....you could actually make prints as you go merrily along your career path, and with enough prints you could put them into a book, or an album. You could make a book of images with similar styles and your work would look really cool when you showed it to clients in the right now, on the spur of the moment, in a quiet time between rounds at happy hour.

The benefit of the book I made above is that the 10 inch by 10 inch prints which grace every spread are more than big enough to show detail and craft and yet, closed, the 10 x10 book is wonderfully portable. It fits in your camera bag, or your computer bag, or whatever you carry around with you.

It works in almost any light. Your client can hold it in their hands or they can put it down on a table and it will lay flat. They get to leaf through your art at their leisure, their pace. They can stop from time to time to tell you once again that you are a genius.

Multiple people can see it from multiple angles. If the power goes out you can step into the fresh air and still show your work. It's like magic. And taking the time to print your images, sequence your images, produce a book and carry it with you shows the possible source of work and income in front of you that you are serious. You've thought about your work, its presentation, and it's overall consistency. It shows you've got skin in the game. Commitment.

Wow. That's a lot of marketing packed into a small, square space. Get serious. Make a book of your work. Just a small one with 30 photographs. How hard can it be? You are serious about all this, right?

Posted by Kirk, Photographer/Writer at 19:46 16 comments:

Lydia in quality control. Why it's good to leave the "entourage" at home sometimes... 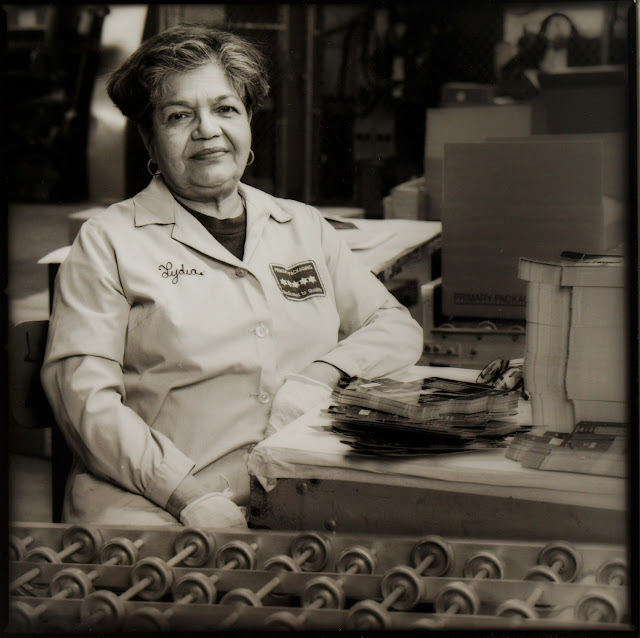 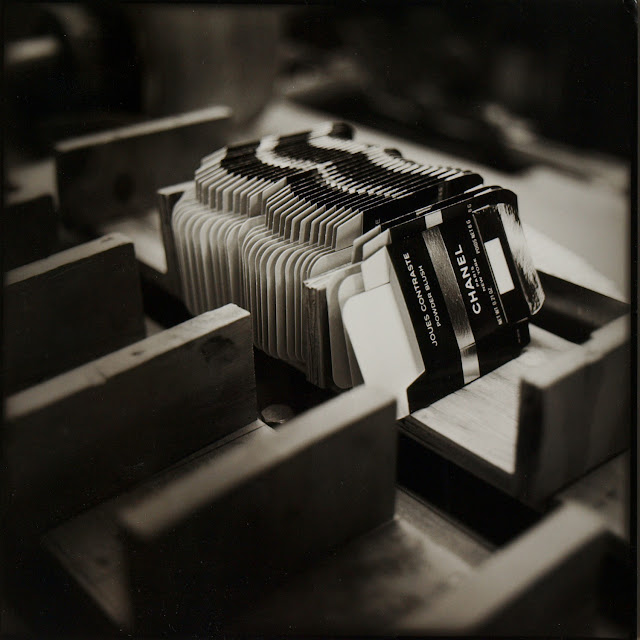 I constantly come across photographers who can't seem to work on their own. They need assistants at their sides even for the most rudimentary of jobs. In some quarters it feels like a fashionable thing to have plenty of people around to get the photographer coffee or a juice box. I can imagine that some would never consider carrying their own gear or opening their own doors. And, of course, they would be lost without someone to keep constant tabs on their smartphone to alert the photographer instantly if the need arose for an emergency Instagram posting...

Beyond their own entourages many photographers absolutely need the minute by minute supervision of art directors and clients to help guide them through the process of.....taking photographs.  How do I know this? I talk to other members of these photographer's teams, like the digital techs.  The prevailing trend is to shoot everything tethered to the biggest screen one can find. With a tethered monitor the group centric photographer can crowdsource things like: taste, vision, style, color preferences and even simultaneous post production looks. Imagine being in a creative business without ever having to make a creative decision on your own. How marvelous (dripping sarcasm...).

I can just imagine the scene when a client whimsically decides to proffer the idea of shooting outside, on a city street. "Can you imagine it?" she might exclaim, "We could have the models walking briskly down the sidewalk--- and get this--- they would be holding our products!!!!" The entourage squeals with delight as the second first assistant calls a rental house to source a digital tech cart with bigger wheels....maybe even a servo motor for self propulsion.  Another second second assistant calls to make sure the digital tech's chair can be attached as well.

Now we have ten or twelve or more people moving down the side walk with two models. The photographer is shooting and then craning his neck to see what he got on the monitor as it rolls by on the cart with big wheels. His girlfriend and a series of first, second and third assistants chime in to either critique or to make "oooooohing" and "ahhhhhing" sounds of mystified approval while the digital tech struggles to both add a post production "look" to the material while correcting the exposure ("no real artist understands how to use a meter!") and simultaneously uploading selected images to Twitter, Facebook and Instagram. One layer of the entourage has their cellphones at the ready, doing behind the scenes photos of the "team" working while a second layer of second assistants snaps them snapping selfies as well.

Doesn't really matter how good or bad the photographs are as everything is destined to go along to a retoucher who will pay for his new boat by fixing the mess the entourage created. Always sad though when no one in the entourage pays attention to the cross walks and the digital imaging cart gets creamed by a bus. Thank God the fourth assistant called the rental house to specify an ejector chair for the the digital tech. Oh, photography has become so much more difficult and unpredictable since the invention of digital imaging.

Written after realizing that the photos above came from a project I did in New York city with no entourage. Just a bag of film, a couple of cameras, a light meter and a few lights. The ad agency didn't send along an art director. The client didn't demand a stylist or a make-up person. Was it really so easy to do good, fun work back then? Yes. I generally find that having an entourage of any size doubles the amount of time anything takes, homogenizes all creativity, quadruples the budgets and puts the photographer into a situation where he has to listen to inane chatter all day long.

If I had to work this way I'd sign up for a different occupation. Preferably one that could be done far from the madness of group think. #teamworkSucks

Posted by Kirk, Photographer/Writer at 11:56 3 comments:

Just for fun. From the Zach Theatre production of "Alice in Wonderland." 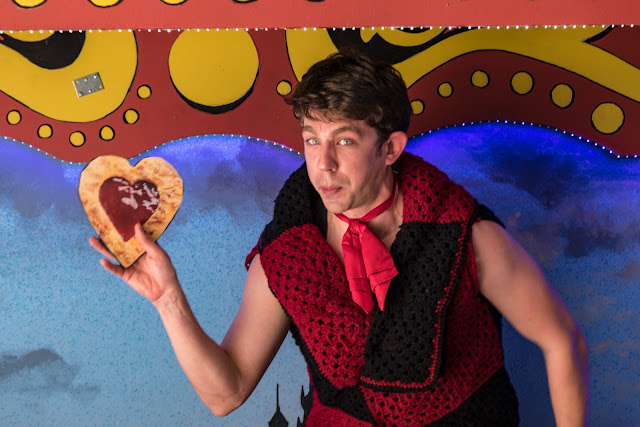 A favorite, quirky image from the Zach production of "One Man, Two Guvners." 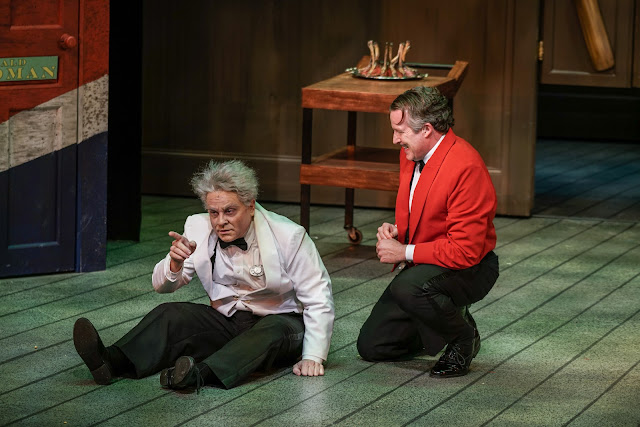 Ahhh. Settling in with a great stage shooting combination. The Sony A7Rii and the 70-200mm f4.0 OSS lens. The camera is quiet silent and the files that emerge from it as 18 megapixel Jpegs are noise free at nearly every ISO. The images are sharp, detailed and nicely colored.  The lens is equally silent and convincingly sharp at its fastest aperture. Add to this the five axis image stabilizations that combines the stabilization of the lens with the stabilization in the body and you've got a rock solid platform to shoot with in any theatre environment. Need more reach? Put the camera in the 42 megapixel mode and then selection "APS-C" as your working crop. Now you've got an extra 100mm of reach with the same resolution you had in the first place (more or less).

I supplement this with the a6300 for the wide end and I'm totally happy. And it all fits nicely into my smallest, Husky tool bag ---- you know, the one I bought for $19. A warm sense of satisfaction just settled over me......of course, it could just be the jalapeños from my breakfast taco....
Posted by Kirk, Photographer/Writer at 10:21 2 comments: