I always wonder what they really mean when people tell me their cameras are "obsolete." 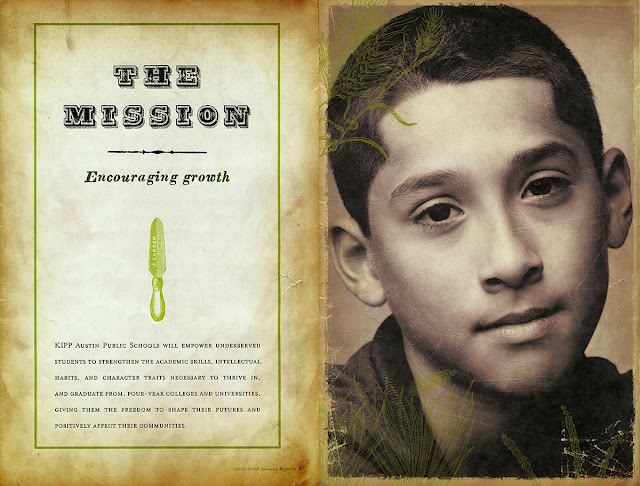 A Spread from the Kipp School Annual Report. Designed by Gretchen H.

We are a culture of obsessive, serial upgraders. We're always looking for the "best" solution to imaging projects; as though the camera was responsible for creative decisions or building rapport with a subject. I get it when people upgrade because a feature like video might open up a new business opportunity. After shooting my first commercial project in 4K video I now get why someone might upgrade to take advantage of new video technology. But, looking around at the visual landscape, I'm not sure that upgrading still cameras is a very effective tactic.

The longer the "digital revolution" drags on the more I am convinced that "heretics" like Ken Rockwell had it mostly correct when he preached that 6 megapixels was as much resolution as most photographers would ever need.  Or when he wrote a long piece about sharpness being an overrated parameter when judging the success or failure of an image. We've all moved on from 6 megapixels to 16 or 24 or even 50 megapixels but there is hardly any indication that the final quality of most advertising or editorial imaging is even marginally improved, in any sense, over what the previous generations of cameras provided us.

More and more I hear from people who think their cameras have become "obsolete" because the company who made their camera has come out with an updated model. Many times the update has very little to do with image quality and is introduced as "new and improved" based solely on newer features or the fine-tuning of features none of us asked for in the first place.

While we've eventually found some uses for things like wi-fi, GPS, panoramic modes, super high frame rates, in camera HDR and more, most of these things have absolutely nothing to do with making images of higher overall visual quality and everything to do with slaking the mass market's camera attention/boredom disorder. People would rather master the working methodology of a new "feature," and find some sort of seemingly practical use for their newly mastered feature than actually practice the discipline of concentrating on the visual projects they previously professed to love or enjoy.

It seems they are more interested, for example, in mastering GPS and being able to show people exactly where, on a map, they took a photograph than in taking the time and effort to actually make the photograph interesting enough that people would enjoy looking at it. Does it matter where in the world an image was taken if the lure of using new technology side-tracked the user to the extent that the example image failed miserably? And I am sorry but nearly everyone I know who is busy geo-tagging their images is profoundly....boring.

Does having HDR in a camera create a subconscious desire to stop looking at the subject matter you used to like in preference for new type of subject matter that might better show off the technical proficiency of the HDR feature you are attempting to master?

Is the compulsive use of super high frame rates really producing more "perfect moments" or is it just instrumental in building a library of almost identical images, the bulk of which are boring garbage but are good at showing off the speed at which you can operate the shutter?

I think about these things as I hear from friends, and even readers of the blog and then I open the bottom drawer of the filing cabinet closest to the door of the studio and rummage through the samples from years (and decades) past and try to see if I can actually see a difference in the final products of the cameras I use today when compared to past generations.

The image above is a good example. It was taken with what most of us would now think of as a primitive camera. The camera was the quirky but lovely Sony R1. It boasted a 10 megapixel sensor, a slightly smaller than APS-C sensor and a two frame raw buffer. The lens was great but the AF was slow and kludgy by today's standards. The EVF was small and of a low resolution, and the camera lacked any video capability.

But when it came out the R1 was viewed as a fine and very workable picture taking machine. In fact, because of, or in spite of its limitations I worked hard to deliver well lit and well seen image constructs to its sensor. The image in the brochure above is a tight crop of a much wider frame. The overall design project won Addy Awards for the design and photography, and it still shows well today in my portfolio. I can't think of a single "improvement" in my current cameras that would have made the images we created for the brochure any bit better. Even 11 years ago the technology already existed to make photographs whose technical qualities generally exceeded the talent of most practitioners.

The one thing that makes me believe that this "obsolete-ism" is a false crutch is the fact that every time someone asks an audience to envision their "ultimate" digital camera the vast majority of audiences always come up with the same basic requests:  All I need are XX megapixels (whatever the current average is). I'd love a camera with no extra junk on it that I never use. I'd love a camera without video. I want the controls to be very simple and straightforward. I don't need or want any of the silly filter modes or picture modes; like sport, or lunch or baby mode. The menu should be drop dead simple and not cluttered up with too many choices.

I think what I hear when people say, "My camera is obsolete, I need to upgrade to...." is really, "I am too lazy to go out and work to get good shots. I am too lazy to perfect my technique. It's a hell of a lot more fun to just play with new cameras. Maybe this year's camera will have an auto-pro mode that will make my photographs more interesting."

I'm not pointing a finger at anyone else. I'm guilty of exactly the same thing.
Posted by Kirk Tuck, Photographer/Writer at 17:16

Obsolete is defined as any product for which a replacement has been *announced*.

Once said replacement is actually available, the correct term changes from 'obsolete' to 'legacy'.

As a hobbyist, and one who enjoys keeping up with the latest gear info, I'm still shooting with an "ancient" camera. A Leica M-E based off the M9. At base ISO up to ISO640 I will probably never exceed the capabilities of this camera. Sure I'd really like to have another stop or two in the ISO, but I've found that if I need much more than 800 ISO what's the quality of the light I'm shooting in? Then there's the 33 year old 35 Lux whose character changes depending on the aperture setting. I could go on, but feel we do let the new "kid" on the block get in our way sometimes.

Still waiting for ISO3 to 25 so I can shoot like I did with TechPan and Kodachrome 25.
How in the world did we ever cover NFL with manual cameras, 600 f/4 manual focus lenses and 3-5 frames per second? Newer photographers not tell me that it is impossible without 8+ frames per second.
Don't even get me started on Fight Photography. The old Speed Graphics with flash shot some of the most compelling images in B&W we will ever see.
Yes, I use digital a lot but still use the 5x7 and 8x10 Deardorffs. No matter the gear it is the final image that tells me what works.

I bought a new Pen F just yesterday. Now I feel guilty. I know my images today will not be better than yesterday.

I discovered this a few years back when I got back into film. After I had (re) learned how to develop my negs and to get good scans, I was happily making exhibition prints for shows. I got lots of compliments (usually I had digital camera pints in the same show which also did well). One comment I have never had is "You must be using an obsolete camera!" After that epiphany my photography has I believe, improved. I can also better determine when a new camera/feature/lens will help me better take the type of pictures I want to make... and no, it's not that often.

Obsolete for me is when my eyesight has deteriorated sufficiently for me to require an improved EVF*. (And to a lesser extent, hand steadiness/ anti shake.)
Everything else is good enough.

*Eventually, that will mean artificial eyeball replacements, of course.

Google tells me "obsolete" can be used as a verb:

verbUS
verb:
1. cause (a product or idea) to be or become obsolete by replacing it with something new.
"we're trying to stimulate the business by obsoleting last year's designs"

Maybe that tells us something?

I frequently question my decision to buy the Nikon V1, 4+ years after its release. That is, until I review the latest set of 1200 pics shot in RAW under a dismaying array of lighting conditions. Do I need more than 10 megapixels? No. I've seen the Rockwell and Steve Huff photos they shot at 4 and 6 mpx. Gorgeous stuff. My camera desiderata are sort of working-man earthy and rough cut: it should focus and expose very, very well, and it should advance the frames reasonably quickly and the photos should have a pleasing look straight out of the box. For that, there was none better than my lat-1990s film Nikon F4. It was "pro" because "it done it right." And for my present purposes the V1 is extraordinary. Not perfect, but a very, very good tool.

I still use my Sony NEX-3 -- one of Sony's original entries into the mirrorless world back in 2010. Obsolete? I don't think so. 14 megapixels, solidly built, it's a perfect walkaround camera (except for the missing EVF). I was really hesitant about straying from my A-mount system, but I loved the NEX-3's tiny footprint.

So, I bought it with the pancake 16mm kit lens and later added the fisheye adapter. If I want to get away from the world for an hour or two, what a perfect combination ... small, light, tough, funky perspective ... what's not to like! Image quality? IQ is way more than I need for Instagram or Facebook, right? I wish the NEX-3 had built-in WiFi, but that's about it. The "baby diaper hold" is fine with a fisheye, no EVF required ...