I like the way 135mm lens, on full frame cameras, cropped to squares, looks. It's a mix. 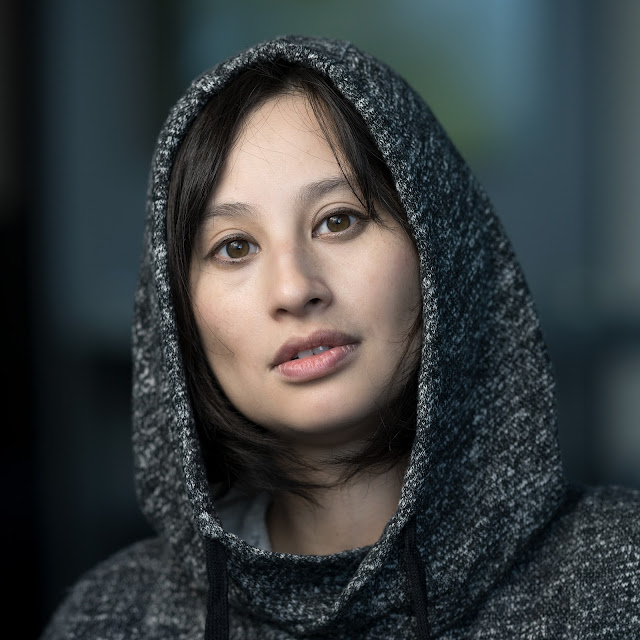 For a while now I've been talking about shooting portraits in a square format. Many have commented that they routinely shoot stuff in a 3:2 aspect ratio with the intention of later cropping to square. I had trouble getting my brain around post partum cropping because I was concerned about not composing correctly or, not having enough resolution with the outer (vestigial) wings cut off. I recently put a cheap, plastic protective cover over the rear monitor screen of my A7Rii and marked off the cropped square with a black Sharpie. Now I have permanent square frame lines. Oh joy! I'm also happy to know that I still have nearly 24 megapixels of image resolution left after the crop. Now I can breathe a sigh of relief and start making portraits the way I like them again.

The final piece of the puzzle for me was to find the right focal length to complement the square and the way I like portraits to look. Historically, the images I liked best all came from about 135mm of focal length. To that end I've been using the Rokinon 135mm t2.2 cine lens as my primary, square lens.  It gives me the compression that I like and, when used near the close focusing limits and the aperture range of f2.2-f4.0 it gives me the kind of quick focusing ramp that helps to isolate faces in a charming way.

I always know when my brain agrees with my heart because I start begging my friends and colleagues to come over to the studio for a little portrait sitting. I've been on a roll lately.

The image above is the color file that corresponds to the black and white image I showed about a week ago. We aren't in my studio but in a airy space at the Topfer Theatre on the Zach Theatre campus. I used the lens to make this image of Rebecca and, previously, images of Jack Donahue. Now that I finally have some free time to post process I am very happy with the choices I made.

It's nice to find that sweet spot you have been missing...

Posted by Kirk, Photographer/Writer at 15:40 5 comments:

Vital news of the day....the Pricing of the Olympus EM-1 mark2. Cavernous Yawn.... 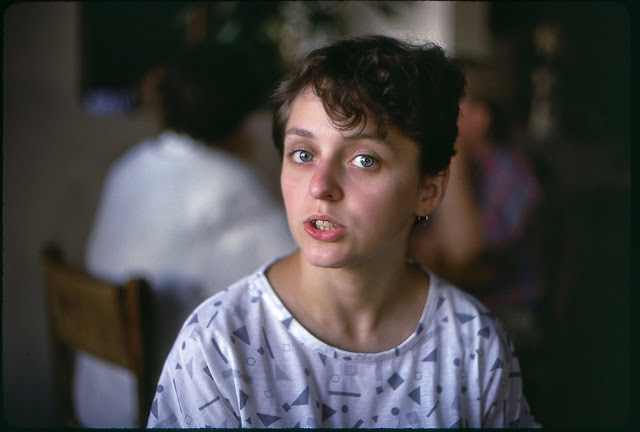 I have to laugh. So many of the photo blogs are twisting themselves up in knots. They love the Olympus EM1-2 but can't seem to get over the price. Some commenters are sure that one month's rent is the inflection point that will cause enough pain to camera buyers to make them consider the EM1-2 unattainable. Others remind the flock that only a few years ago a decent digital camera (Nikon's 12 megapixel, cropped frame APS-C, D2Xs) weighed in a $5995. Three times what the much more capable EM1-2 will set them back. One blog savant asked the readers if $2,000 was a fair and reasonable price for the camera and instantly generated a couple dozen responses. It's obviously an issue for some.

I don't know what all the hysteria is about. My favorite camera right now is a bridge camera with a fixed lens and a much smaller sensor and it's been priced around $1600 on Amazon and B&H for the last few weeks. It's not like high end camera aficianados are the same demographic that subsists on food stamps and the kindness of strangers...

I got all caught up in the excitement and controversy of this new "outrageously" priced, Olympus flagship camera and was ready to call my contact at Olympus to request a review copy when I came across this ancient image (above) in my files. It's a photograph of Belinda sitting in the Clarksville Cafe at least thirty years ago. It was photographed using an ancient Tamron 28-70mm f3.3 to 3.4 Adaptall zoom (very much manual focus) on an equally ancient Canon F1 (not the new style...) body. The image was burned onto Ektachrome 100 slide film.  It's handheld. The light levels were low. There was no matrix metering. No focus confirmation. The only "image stabilization" was alcohol.

But the photograph is as good as I would expect from any current camera; maybe better. As Jimmy Hendrix once told an aspiring musician. "You don't need any more pedals you just need more practice."

I'm never opposed to buying new cameras but I am mystified by the idea that the value of a camera can be correlated to its sensor size, or even the size of the camera itself. For decades the smaller Leicas were always more expensive than the bigger Canon and Nikon cameras. And, of course, it's hard enough to get one's mind around the $1,000 price tag of the tiny, new Sony RX100-V...

If you can't afford to spend $2,000 on a camera then you probably should not buy the Olympus EM-1-2. If you can afford it but you don't need to replace your existing camera (or system) you might want to pay down your mortgage or pay off some other debt. If you know you need what that camera can offer AND you can afford to buy it then off you go. You are the only one who can ferret out the right decision for your situation and your usage. I will say this though, if all my images came out as well as the one above I'd be happy with whatever camera I happened to be shooting at the time.

Can you believe it? It's been over six months since I bought a new camera. Or a used camera. Amazing...  Almost as if I was in camera rehab.