Saturday Practices. In the water, at the theater. 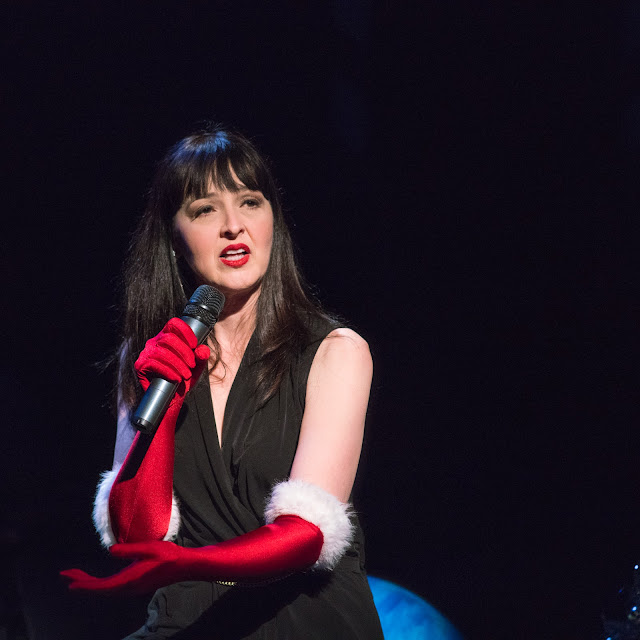 After months of warm weather it's a seriously refreshing experience to get from the locker rooms to the pool in 40+ degree weather with a gusty wind blowing. It was a long slog through a complicated set this morning. By my count a little over 4,500 yards. I've been practicing one part of my freestyle stroke lately and that's an acceleration of my hand/arm during the last half of each arm pull. It must be working because I've been sore and tired after every practice... Seriously though, changing a stroke takes time and uses one's muscles in a slightly different way. The proof is in either speed or increased endurance or both. My stroke technique is a constant work in progress which improves by plateaus as I practice.

After the swim, and coffee with fellow swimmers, I grabbed a small Husky tool bag filled with small cameras and lenses and headed to the theater to practice a different skill set. I have two lenses that I get great results from --- if I slow down and practice good technique. One is the Rokinon 85mm t-1.5 and the other is the Rokinon 135mm f2.2. Both are manual focus lenses with fairly long throws on the focusing rings. Manual focusing moving subjects in changing light is something that takes consistent practice; even with aids like focus peaking. So, I requested permission to come to a rehearsal of SantaLand Diaries in order to actually get some practice.

With long, manual focus lenses there are things to consider: The closer you are to a subject the harder it is to focus quickly. Stopping down a manual aperture lens on camera (a lens that works at its "taking" aperture) means that a lens shows more depth of field in the finder which makes finding the exact point of sharp focus much harder; and finally, the longer the focal length the shallower the depth of field which means that a close focus subject, moving in low light is a tough target. That's what I was working on today. Meredith McCall (above) and Martin Burke were in full rehearsal mode for a production that opens at the end of next week. They didn't mind having me around, after all, someone has to supply an appropriate laugh track.

I shot three or four hundred shots and used the two lenses in a much different way than I would if I'd been hired to do the shoot, or if the results were mission critical for the theater. I played more with shooting wide open which meant having a much bigger ratio of crap-to-good photography. But that's why it seems to me important to practice. Often. The brain and the eye have to work in concert until the hand movements driving the lens controls become second nature. I think the only way to get there is to do stuff over and over again until it becomes fluid. Until there is a certain flow.

I felt it today with my freestyle. Not all the time but just when I was in a certain groove and not over thinking the mechanics. I started to feel the same way at the end of the rehearsal at the theater. Not all the time but mostly when I trusted my intuition and committed without hesitation to pushing the shutter button. I can only imagine that if I still had the energy to swim four or five hours a day that I'd be able to drive toward textbook technique much more quickly. Never perfect but closer to perfect quicker.

By the same token, I'm sure if I worked on the small stage at Zach Theatre with the same camera and lenses every day, instead of once or twice a month, I might build a fine combination of muscle memory, intuition, and insight into the rhythms of each director and actor and thereby become a much better documentarian of live theater.

All I can do at this point is practice and learn. And there's so much to learn but it seems to be all about how my physical and neural collaborations happen. Nothing about facts and figures, or vital pages in an owner's manual. Practicing on Saturday to be a better swimmer on Sunday. Practicing in rehearsals on Saturday to be more alive and aware in the dress rehearsals next week.
Posted by Kirk, Photographer/Writer at 16:58 1 comment: