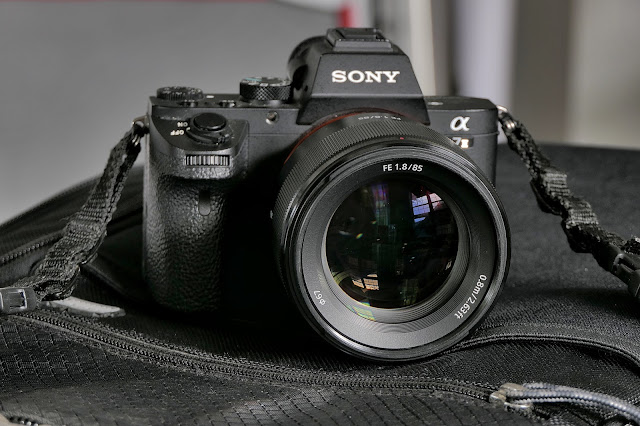 I recently purchased the Sony FE 85mm f1.8 lens at the current, full, retail price of $599 from a camera store, here in centralTexas. As I've written before, I really like the 85mm focal length and depend on lenses in the 85mm to 135mm focal range for a large percentage of both my paid and my personal work.

I bought this lens because I have owned the manual focusing 85mm 1.5 Rokinon Cine lens for the last year. I noticed that I was enjoying using that lens for work less and less because it added more steps to the shooting workflow. I had to constantly make sure that the "non-click" aperture ring had not been moved inadvertently while shooting. I had to "punch in" to ensure I was in focus. And the geared focusing ring, while great for using a follow focus mechanism for focusing in video, was a pain in the hand for day long, repetitive use.

I wanted a lens that I could use in conjunction with the face detect AF in my two A7xx cameras. Yes, I've gotten lazy. Or I've gotten too busy to have the patience to nurse the process.

I've owned the 85mm f1.8 lenses from both Nikon and Canon, as well as the 85mm f2.8 for the Sony SLT series cameras. I was hoping this model would be at least as good.

My testing routine is fairly simple: Toss the lens on the front of the camera and then start shooting stuff around the stuff. Put the camera on a tripod, turn off the I.S. in camera and pay attention to the focusing points I'm using. I shoot papers with fine type that are strewn across my desk. I make portraits of the ever patient Studio Dog. I shoot the leaves on the trees outside the windows. Then I grab all the big-ass raw files and put them into Lightroom and start examining them at 1:1. If everything looks good and the focus is accurate then the lens goes into the bag and we're off the to races. If not, the lens goes back to the store and my credit card is once again newly energized with buying potential.

This lens passed with flying colors. It gives me a highly detailed file at f2.8 and higher. It's sharp enough at f1.8 but I don't often find myself making portraits at that f-stop because I find it difficult to keep the tip of a portrait sitter's nose and their hairline near the front of their ears equally in focus. It's that depth of field thing. By f4.0-5.6 this lens is everything you could want in a lens at this focal length. It's sharp, contrasty and brimming with nano-acuity(tm).

The overall design is spare and utilitarian. There are two controls on the body of the lens itself. One is a simple AF/MF switch and the other is a round button which gives you a convenient focus hold. It can apparently be programmed to do other things but I confess I haven't found an application that would be better than a focus lock for a lens mounted button. I guess the eye-AF on function and the depth of field preview functions would both come in handy, depending on the kind of work you do.

The optical formula is more complex than previous generations of 85mm f1.8 lenses I have used. It features nine elements and at least one of them is claimed to be  an ED (extra low dispersion glass). A bonus for all the people who believe a camera should be usable in driving rain = the lens is said to be moisturize and dust resistant. It is also designed with nine aperture blades for a smoother out of focus rendering. Finally, the focusing mechanism used double linear motors which makes focusing fast and noise minimal. This also makes it a good choice for video production.

I spent two days shooting commercial projects with this lens exclusively. The first project was to make eight individual portraits of attorneys, in the studio, against a white background. The lens worked well, the face detection AF worked quickly and with no hunting, and there is no evidence of any flare or veiling as a result of shooting into the white background.

On the second project I was making portraits of several attorney at their downtown high offices. They were environmental portraits which leveraged soft window light and the supporting light of a couple of LED panels shining through large diffusers. I shot at f3.2 for these images. I was happy with the highly accurate focusing (again, using face detect AF on the A7ii) and the overall tonality of the lens. It has an optical quality that I would call "solid." Everything in the scene seems, optically, well locked down and detailed even when viewing the resulting raw files at 100%. There is one thing I did notice in the files shot at f3.2 that might bother other shooters and that is a tendency to vignette. I don't have a profile for this lens loaded into Lightroom yet and I'm sure that would eradicate the vignetting. It's certainly not enough to be disturbing to me and it's easy to fix manually. But it is there.

The lens is small and light. It's a bargain compared to the 85mm f!.4 lenses that people seem compulsively drawn toward. It's less than a third the price of the Nikon or Sony f1.4 versions and far less than half the weight. And more importantly, I am sure that from f2.0 up to f8.0 there is no real, optical quality difference that can be reasonable discerned with the human eye. Caveat Emptor.

Even using my own hard earned cash, I would buy this lens again in a heart beat.

Posted by Kirk, Photographer/Writer at 09:55 2 comments: