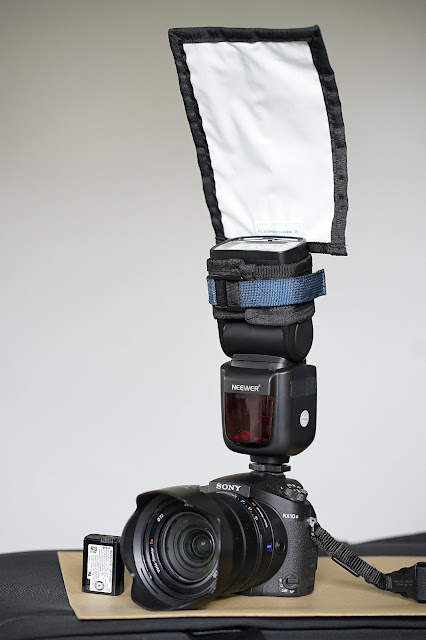 After having to wade through all the nonsense about my latest fascination with video I thought I'd give my readers a break and write about a more traditional photographic function = shooting an event for a conventional client. With a photography camera and even a flash!!!

I've shot events many, many times over the last few decades. I started out shooting events at conferences and galas in hotel ballrooms with a Hasselblad 500 C/M camera, a trusty 80mm lens and a big-ass, potato masher flash, complete with a lead-acid battery pack that must have weighed ten pounds and a lot of shoe leather zooming. Over the ensuing years the camera and flash have changed but very little else about events has.

Yesterday evening saw me covering a corporate event for a non-profit. They were having a poster sale as a fund raiser at a trendy new venue on Congress Ave. Right in the middle of downtown, just a block or two from the state capitol building. The invitation list included a motley mix of attorneys, advertising agency people and, or course, artists. Mostly the artists who did the commissioned posters and their friends. In all about 350 people showed up to see the art, buy the art, and support my client.
The event was beautifully done, with open bars and
good catering by one of Austin's venerable caterers. I personally did a lot of damage to the smoked salmon...

As I mentioned, not much changes about event photography. My job is to arrive early, photograph how great the venue looks and, in this case, also photograph each one of the posters as well as groupings of the posters. There is always a "V.I.P." reception that last half an hour or so and gives the heavy hitting donors a chance to preview the art and mix with like minded philanthropists. Small groupings of people nicely dressed are photographed. People smile for the camera and hold their drinks low enough to keep them mostly out of the frame. After that the crowds roll in, the lines form at the bars and the catering tables disappear behind a wall of people.

There were twenty artists and I needed to get photographs of them in the mix. There was a contingent from the AIGA (American Institute of Graphic Artists?) as well as a bevy of people from law firms and ad agencies. I needed to identify and document the decision makers and the luminaries from each tribe. Then, of course, there is always the need to get a bunch of couple photographs that can be submitted to the magazines that thirst for society coverage. It's important that all of these couples be identified, names spelled correctly, etc. in order for the submissions to be accepted. This means that I need to carry a small notebook with me so I could shoot, note the frame number(s) and jot down the names. A bit of juggling but what are you going to do? I felt so analog every time I pulled out my hefty pen and my little leather bound notebook and scraped the nib across the tooth of the paper...

While I am usually an adherent to the cult of LED lighting it's well nigh impossible to make continuous lighting work in big spaces, in low light. The low light fights with the bright lights of the LEDs and makes subjects very blinky and very cranky. Very cranky. So we default to tried and proven last century technology and grab for a flash every time. I've been using a Neewer flash that provides dedicated TTL function with my new, favorite event camera. The flash also uses one, huge lithium battery instead of the old double "A" batteries. One charge of this 11volt, 2200 mah battery is supposed to give me something like 500+ full power flash pops. All I know is that I worked that crowd hard from six to nine pm and had lots of battery juice left over at the end.

While in the past I might have brought along and used two big, full frame DSLRs, two flashes and two overlapping zoom lenses I just couldn't see any logical reason to haul along ten or fifteen pounds of gear to cover a fun and casual social event. Now, don't get me wrong, I still want the photographs to look technically as close to perfection as I can get them (under the circumstances) I just don't want to carry around a bunch of unnecessary weight; nor do I want to switch back and forth between camera bodies when I need to go from a wide shot to a tight, long shot. I chose a more sensible and effective alternative.

I brought along one Sony RX10iii, the above mentioned flash, and several extra camera batteries (they fit nicely in a jacket pocket). People understand that they are going to be photographed so I left the AF illuminator on automatic, set the camera to face detection AF, set a manual exposure that would under-expose the ambient room light by about one to one and a half stops and then depended on my flash to get those exposures nailed into place. Having one camera that can take you from 24mm to 600mm without having to change lenses is so efficient. I didn't need that much reach on the long end but not having to vacillate between the 24-70 and the 70-200 was an altogether charming and comfortable experience.

I spent my evening smiling and making conversation and pulling people into small group shots; everything else I left to my camera and my flash. No sore neck or shoulders for me the next morning.

I do have to confess that I had to throw away several dozen images (out of 500). Sadly, people sometimes blink. Or grimace unexpectedly. But as long as the boxes that dance across my EVF turn green I know I've got somebody's face in focus and I know the shot is going to work.

Just to leverage my chances I shot everything raw. Really didn't need to but doing so is like wearing those little water wings in the pool. It's a safety net for the insecure.

The camera is just delightful for this kind of work. I'll never go back into the 20th century inventory of event photo gear again.

This kind of work seems so easy, so effortless after sweating through eight video productions so far this year. Funny thing? I'm using the same inexpensive camera for both. Not exclusively, but mostly.


Posted by Kirk Tuck, Photographer/Writer at 12:47

Sounds like it was an enjoyable event.
As a Sony RX10 user, I'm curious which Neewer flash you use. Thanks.

Delightful read.
I recall an image of yours of another photographer you captured at an event years ago. He had a ~3 foot (!) hand-crafted 'periscope' like reflector attached. Your comment was hilarious.

The Speedlite is manufactured by Godox. This is latest version for Sony cameras. https://www.amazon.com/Godox-V860II-S-Speedlite-HVL-F60M-HVL-F43M/dp/B01EJBAU6Y.