Back into the weeds of commerce. Clipping path saturation! 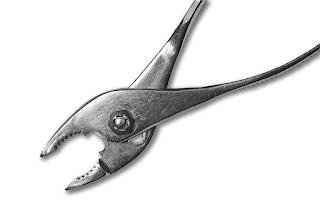 I've written enough about cameras this week. You would think I'm a review site! So I'll write instead about what I'm working on right now in the glamorous and scintillating world of commercial photography. You'll no doubt be so jealous that you'll walk away from your job as chief off shore banking expert at Goldman Sachs to toss your hat in the golden ring of product photography. One day, you to might know the pleasure and satisfaction of ..... the nuts and bolts of photography.

Last Thurs. and Fri. I set up the studio and completed the principal photography for an international client whose H.Q. is located in Germany. Their north American headquarters is here in Austin. I was tasked with photographing 24 medical products displayed on a (shiny) white mannequin (top half of thebody...) against a white background.

We had a product manager, an project manager, a technical specialist to make sure the products were correctly fitted to the mannequin, as well as a person who was there to learn how these kinds of shoots are done so she can supervise her own projects in a different, but related, department. I made coffee and Belinda baked a loaf of pumpkin bread the night before. We also had fresh bagels and creme cheese as assorted fruit. We want to keep our clients well fed.

The products were things like body braces and immobilizing medical devices that might be used for patient who had been subject to trauma or were in recovery from spinal surgeries and neck surgeries. The products were mostly black with some plastic trim pieces in white or mid-gray.

We set up a shooting table in front of a white background and covered the table with shiny white dry erase board material. Since we would need multiple angles of the mannequin+each device I put the mannequin on top of a very basic turntable after covering the turntable with bright white paper.

Exact exposure for this shoot was important because we needed to clearly separate the shiny white mannequin from the pure white background. Important because at some point some poor bastard would need to create two clipping paths per file....with over 90 files.

I used a light meter to carefully meter the background and then the plane of the subject. This is, for me, a tough metering situation since the white in the background had to go texture-less while the mannequin would have to read at about 90% even when printed on so-so four color press paper stock. But I would also have to preserve good, ample detail in the blacks!

We worked our way through all the products and kept notes that will tie each product to a set of filenames/numbers. At each step we got the client's approval and, at the end I had that exhilarating feeling that we'd gotten through the project without a single hiccup. The files were shot simultaneously on two SD cards (because I presumed I had jinxed myself earlier by ragging on the idea of duplicate card slots and redundant back-ups) and immediately ingested into Lightroom with folders created across two hard drives. All that remained for my part of the project would be to go through and clean up the files a bit, make sure they all matched for color (never varied) and tonality, and to quality check them for focus.

Then I asked the project manager how the in-house designer would like the files delivered. What format would she need in order to facilitate the creation of clipping paths? Big Tiffs? .PSDs? Should I deliver them on memory sticks? Add them to a small hard drive that we use to shuttle big files? Upload them to an FTP address? They had always done the clipping paths in the past.

Maybe the designer was overloaded or overbooked. I might never know... but the project manager asked me if I could do the clipping paths. Being customer service oriented (meaning I want my clients to be happy so they'll: A. Pay me. and, B. Use me again), I said "Sure."

Then he gave me the details. We would need one masked layer with just the mannequin with product on a transparent background. We would need a second layer with just the product (no mannequin), complete with a clipping path for the product. In this way the client could easily drop the mannequin+product into a catalog or just grab the clipped product layer alone and pull that into some other use.

What that means to me is very precise selection (via pen tool) for the overall separation from the background. This selection would go through the refined edge process in PhotoShop and I would select "selection with layer mask" in the "select and mask" menu. Then I would duplicate that layer and, again using the selection tool, I would create a clipping path in the top layer around the solo product. I would then select and inverse the path to drop out the rest of the background (including the mannequin) from just this layer. Finally, I would save the entire file in layers and deliver it as (client preference?) a layered Tiff or .PSD file. Uncompressed the Tiff files done in this fashion; with layers, weigh in at 126 megabytes per. That will give me about 11.5 gigabytes of deliverables.

I did a sample file today and sent it along to the client to get confirmation that we are on the "same page" and that this is indeed their preferred methodology. It takes about 20 to 30 minutes to do each file which means we have about three ten hour days of time in front of the computer to celebrate!!! Of course it's all billable time but it's hardly as captivating as sitting around on Maui with a bunch of bikini models, sipping Cuba Librés and waiting for the light to get neat...

If you wonder why I fantasize about cameras and lenses too often it's probably a direct result of enforced captivity...and a convenient conduit to the internet.

Before all you smart guys rush to tell me all about some clipping services in India that will do this stuff for a song please let me interject that I've been down that road a couple of times and each time I rushed to re-do the work before delivering it to my clients. There is a difference between a ho-hum factory clipping path and careful precision. If you have the right clients then the clients will know. Because, you know, the client's art directors and designers know just as much about good clipping paths as we do....

My workaround is to split the job with my art director/designer wife/partner and share the excitement!!!
Of course, she'll charge me her regular rate but I know her paths will be immaculate and unimpeachable. And that's about all you can ask for in 2017.

Excited? Wanna join in the fun? If you just adore doing clipping paths and need a nice hobby I can send you a folder full of files just waiting to be clipped. And if you own an ad agency in Toronto and can think of a better method than the one I outlined I can send you the files instead... :-)

And that's what we're doing here in the world headquarters for the rest of the week. Enjoying the amazing benefits of the freelance lifestyle --- tied to my desk chair.

Posted by Kirk, Photographer/Writer at 17:13 11 comments: