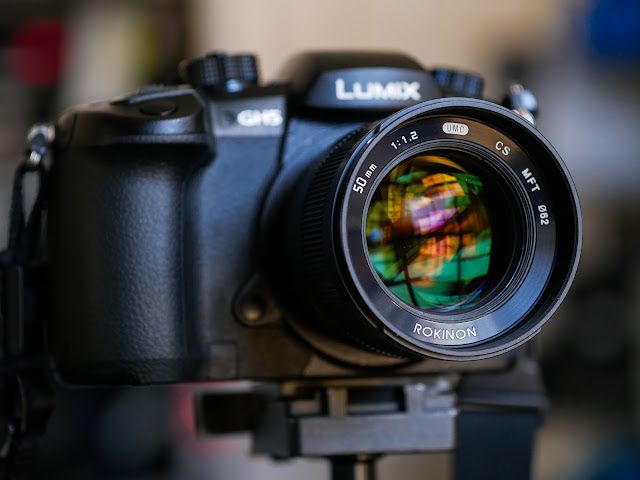 I was looking and looking and I think I found what I wanted. I wanted a very fast portrait length lens which was also very, very sharp when used at its maximum aperture. I have a number of lenses in house that are close but not quite there. Either they are too slow or they aren't sharp enough when used wide open. I've been eyeing the premium lenses in the same general focal length range but each had something that kept me from buying. Or maybe I've become too frugal to just splash out big, hard cash if I can convince myself that there might be other, better options.

I recently stood at the counter in one of my favorite camera stores and played with the Olympus Pro 45mm and the Panasonic/Leica 42.5mm lenses for the better part of an hour. I shot stuff. I focused on stuff. I tried to make them flare. I was rude to them. I was sycophantic to them. I tried out the full range of photographic emotions on them just to see. But I came away not entirely convinced that paying a thousand bucks for either one, for those times when I wanted to blur portrait backgrounds, was really worth it. The Panasonic/Leica is too short a focal length for the way I like to shoot portraits. The Olympus was closer but it lacked something in its visual personality that gave me pause. Too perfect? Too vanilla? I can't quite put my finger on the vibe it gave me. I just wasn't seeing  personality.

Several weeks ago I met with one of my favorite, ongoing clients to discuss a series of day long photo shoots we'd be doing in medical clinics around  central Texas. The samples the client showed me were all images wherein the backgrounds were out of focus. In anticipation of creating lots of images in this style I started assessing the abilities of the lenses I currently have in inventory. I was missing the right combination of speed and high sharpness in three areas; one of which is going to be a stretch...

The first was in convincing portrait focal length. When I took delivery of the 50mm Rokinon the first thing I did was to put it on a GH5 and walk around the house shooting stuff at various camera to subject distances. Wide open the lens is capable of doing good work: high sharpness already at f1.2. Considering that nearly every shot I'm planning will involve a person the sharpness well exceeds my threshold for high quality.

After playing with the lens all day yesterday and a good amount of time today I'm comfortable with it. In conjunction with the Panasonic 42.5mm f1.7 I'm confident I've got the longer end of the assignment well covered.

The lens is sweet. It's small and light for a 50mm. Much better balanced that adapting a legacy, 50mm designed for full frame would be. The idea that the lens is designed for the smaller formats is appealing as I'm presuming they would calculate the optical formula to provide more resolution to counteract the effects of the smaller frame size. While the lens is made of "plastic" I can't feel the difference between that an a metal lens through the rubberized focusing ring.

The lens is completely manual. You will not get exif information in your files. You won't be able to look in the rear view mirror of photography to see what shutter speed or f-stop you used. You probably already know that stuff anyway, right? The lens has no communication with the camera. When you turn on a Panasonic GH5 or G85 a menu comes up and asks if you want to dial in the right focal length with which to optimize the camera's built-in image stabilization. If you've set the right focal length previously a quick touch of the shutter button cancels that window and you are ready to shoot. Being manual, the user sets the aperture on a classic aperture ring on the lens. There's no auto focus.

With the Panasonic cameras it's pretty easy to set a button that brings up focusing magnification which allows very precise focusing. You can also enable the focus peaking feature which also works well with the Panasonic cameras. My proclivity is to use the magnification if I'm working at wide open apertures as, even with the smaller sensor, the depth of field can be small and focusing should be as precise as you can make it.

The lens is a modern design with 9 elements. Two of them are aspherical and the icing on the cake is Samyang's version of nano coating or zero coating or whatever your current company's buzzword for really good anti-reflection coating might be....

The bottom line is this: for around $380 you get a lens that is extremely sharp even at its widest aperture. I saw little or no difference in test files with this lens and many test files I've looked at from its two closest performance competitors. You do give up autofocus and, in the case of the Panasonic badged lenses, you also give up dual I.S. But you gain anywhere from $800 to $1100 (depending on what's on sale this week...) and you get to do your photography as a fully hands-on adventure.

If you also dip into the pursuit of video you'll find that the focus ring has a nice, long through which makes exacting (and repeatable) focusing easy. There are hard stops for minimum and maximum focusing distances and there is much lens of the high ramping that exists in the faux manual focusing of AF lenses. Basically, you'll be able to use this as a cine lens but without the benefit of gearing for focus follow attachments. You can get a cine version for a hundred dollars more but I'm happy pulling focus with this one. It's nice and smooth. 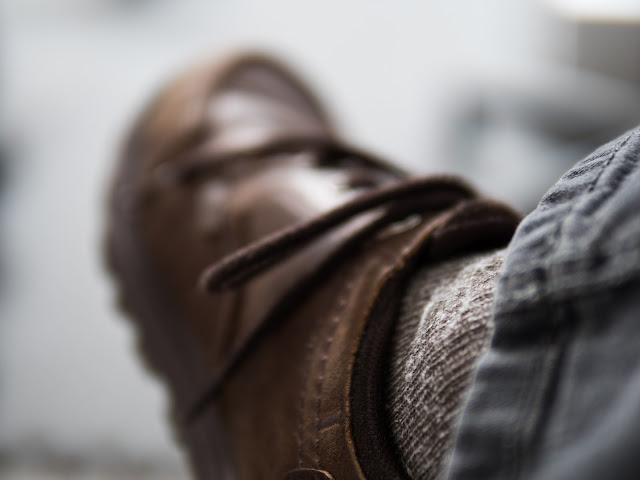 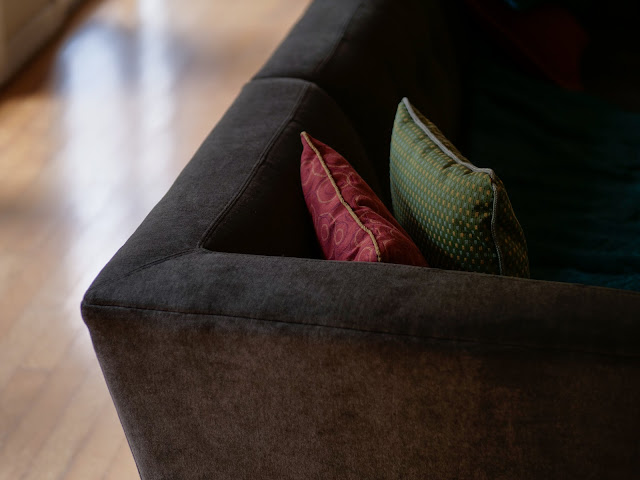 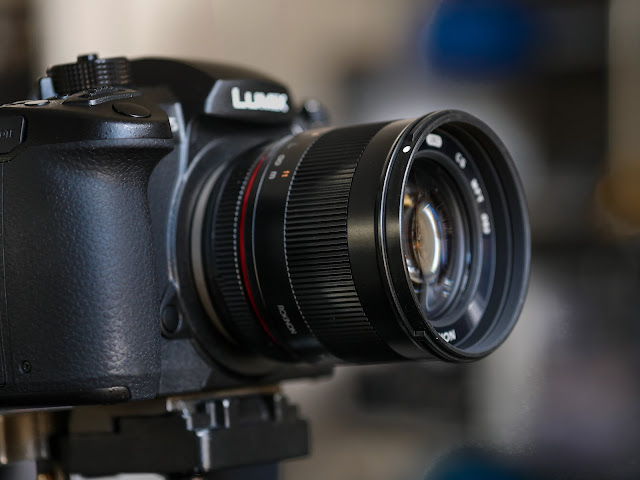 While I continue to be very impressed with the auto focus and handling performance of the two Olympus Pro zoom lenses I have I am really enjoying coloring outside the lines with third party lenses from Sigma, and now Rokinon. They have been uniformly delightful and good performers.

The two camera illustrations in this blog were done with my natty, little Sigma 60mm 2.8 DN DC art lens. As you can see it is sharp and has reasonable good out of focus characteristics. It's a wonderful still life lens and it also does well when you don't care as much about blurry backgrounds.

Another lens that is tweaking my sensibilities right now is the Rokinon 12mm f2.0 lens; also designed for small sensor cameras from the major makers. If it's as sharp wide open as the 50mm Rokinon it would make for a good wide angle solution for the upcoming shoots. I have no illusions though, even wide open at anything further than about four feet the depth of focus will still render much of any scene in sharp focus. I guess I'll master the PhotoShop selection and masking tools if I need to take more control of the backgrounds in wide angle shots. Maybe the control will become addictive...

That leaves one more gap for me to fill in for fast, focus control lenses with high sharpness and that's the area of semi-wide. The old full frame equivalent of 28-35mm or thereabouts. I am currently looking at the Panasonic/Leica 15mm f1.7 lens as well as the Olympus 17mm f1.2 Pro lens. At this juncture I'm leaning towards the 17mm but would love feedback from the braintrust that is my readers and commenters here on VSL. I'm not really interested in how well these lenses perform in a stopped down mode as I have good zooms that are capable of handling the f4.0+ ranges just fine.

What's out there that's 17mm or less and fast as can be? It also has to be good to great when used wide open because its whole raison d'être is to create sharp images with limited depth of field. Otherwise I'd just use the Olympus 12-100mm f4.0 Pro for everything....
Posted by Kirk, Photographer/Writer at 20:20 10 comments: