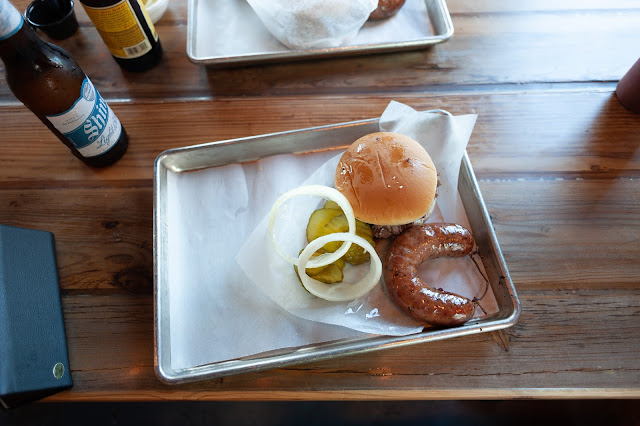 I'm having a blast with the Nikon D700 camera and a small assortment of lenses. Nothing is new, nothing is luxe and nothing would turn heads if I was sporting it over one shoulder at a workshop or expo.

One of the lenses I picked up recently was a nicely used 24mm f2.8 AF-d lens that was languishing on the used shelf at Precision Camera. I'm betting that if I made an enormous enlargement after shooting the lens wide open and I looked into the corners with my handy, dandy Zeiss 5x loupe I'd probably find the extreme corners to be a little soft. I wouldn't care because the lens seems to be nicely sharp and well behaved for the situations in which mortals photograph.

I took the lens and the D700 camera with me when I went to Black's for lunch with art director/friend, Greg. The sliced brisket sandwich was sublime and the sausage link filled in the few empty spots not assuaged by the sandwich. Oh, the lens? I shot a couple of handheld shots of my lunch, just like a hipster, and I'm happy with the way it looks, works and focused.

As is my habit, whenever I have acquired a new lens, I took a spirited walk around the Austin downtown area, snapping away with the same camera and lens. I find it to be a nice combination even though I am usually averse to using wide angles for my personal work. I am thawing toward the wide angles and, at the same time I am softening on the whole issue of optical view finders. I still hope Nikon launches a professional camera with an EVF and that they decide to keep the current lens mount but I'm not holding my breath and I'm not holding these views against the D700 because it's from another era.... 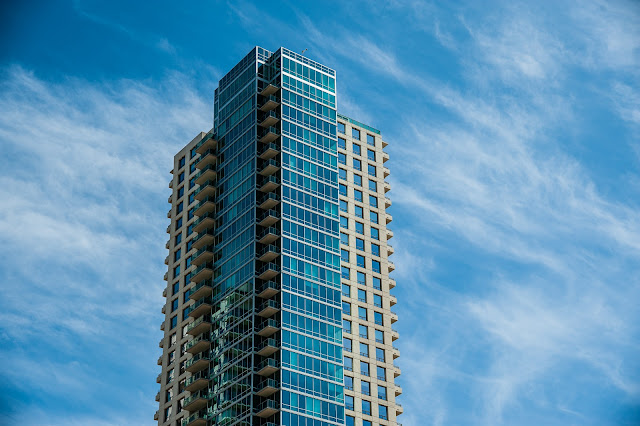 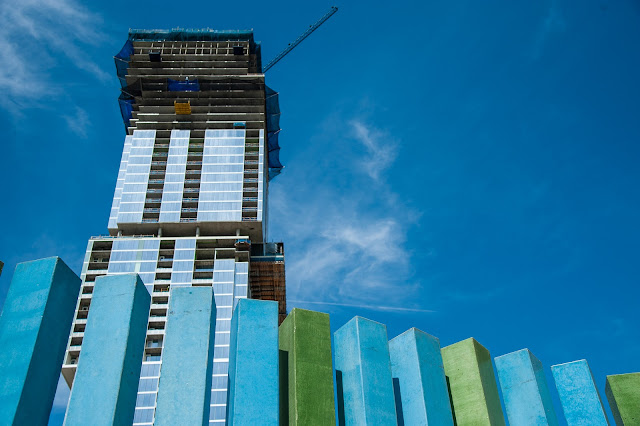 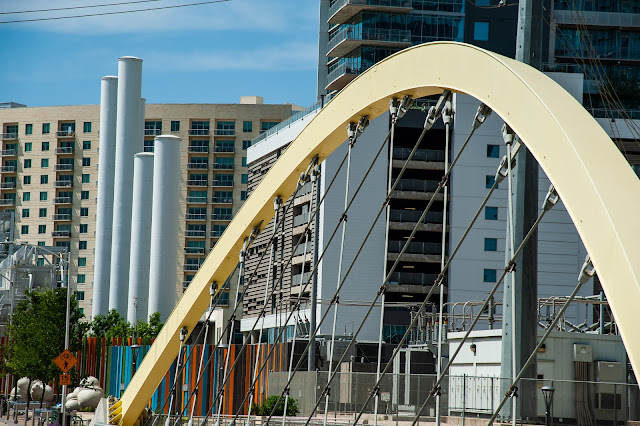 The other lens I'm having a good time with is the now elderly 24-120mm f4.0 zoom (the newest version).  It's funny, when I use this zoom I sometimes check the focal lengths I am using and typically find that I'm normally hanging around in the 35-70mm range. That's fine with me. I keep the longer and shorter focal lengths in reserve.

All the images below are from the 24/120mm f4.0. The lens has a plastic shell but is dense and seems solidly constructed. It's also pretty heavy but the zoom doesn't droop when you walk with it dangling by your side from a strap. Optically it's nicely sharp but does have ample distortion at the wider angle settings. The distortion should be correctable in Lightroom or PhotoShop but as with all camera and lens combos a software corner correction always spreads pixels and lowers sharpness. Starting with a high resolution sensor is preferred if you care passionately about perceived corner sharpness.

The image just below is a handheld image from the long end of the 24/120mm. Again, I'm sure that a giant enlargement might show up all sorts of issues but anything smaller than 20x30 probably won't trigger your criticism. 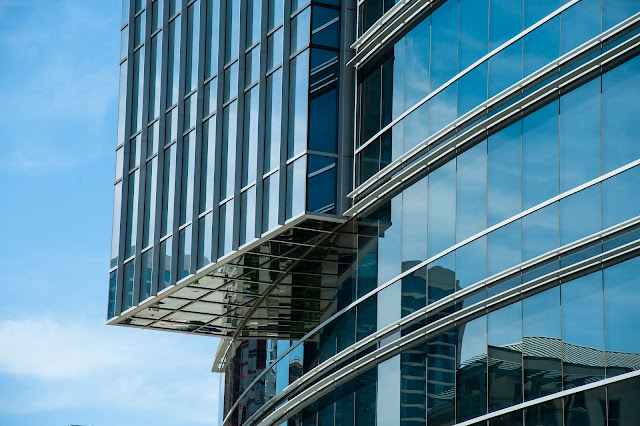 All the images below were done with the D700+24/120mm f4.0. It's a pretty fun rig. I don't mind the weight when I'm shooting for $$$ because there's so much else we're bringing along on a shoot that the heft is meaningless to me. But after spending a week getting used to the bigger Nikon stuff it was a relief to grab a Panasonic GH5 with which to shoot the product photo at the top of the blog post and to also take along to coffee in the late afternoon. Viva la difference. 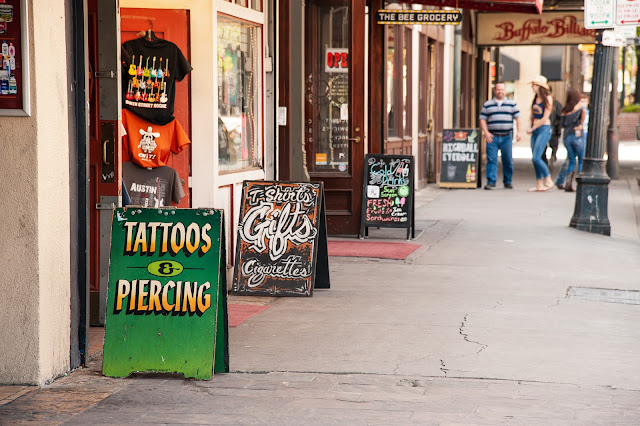 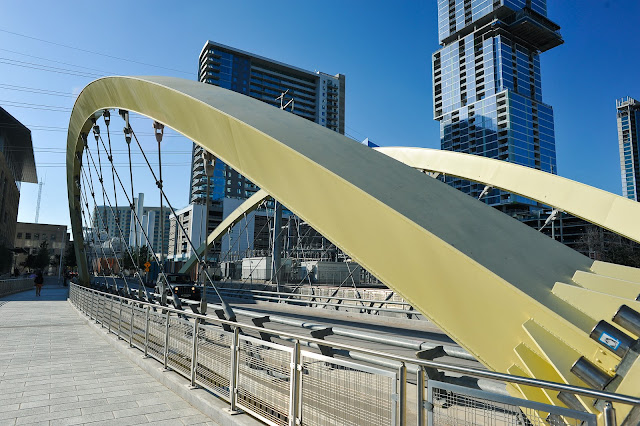 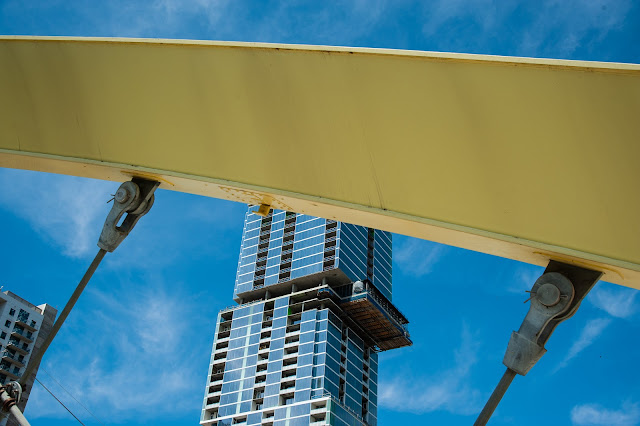 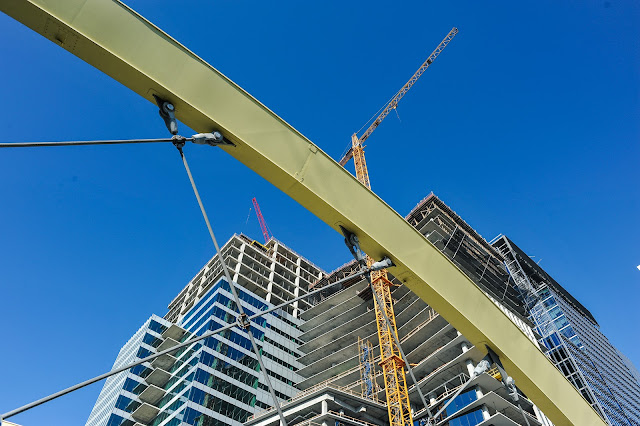 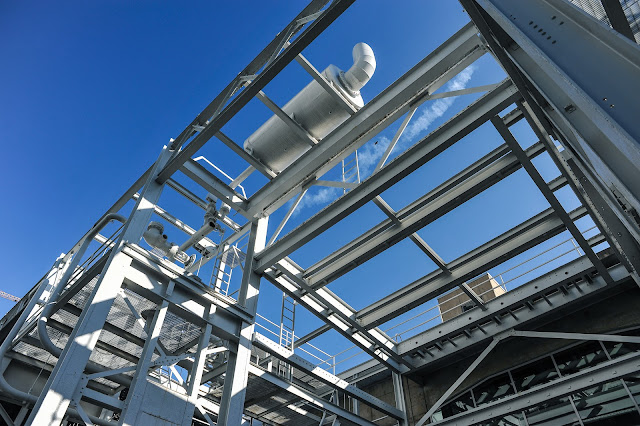 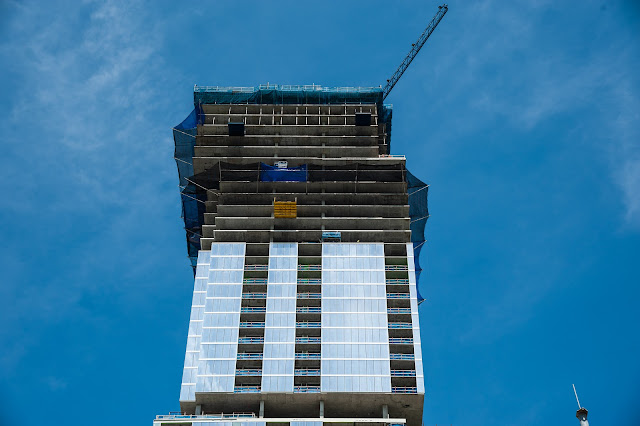 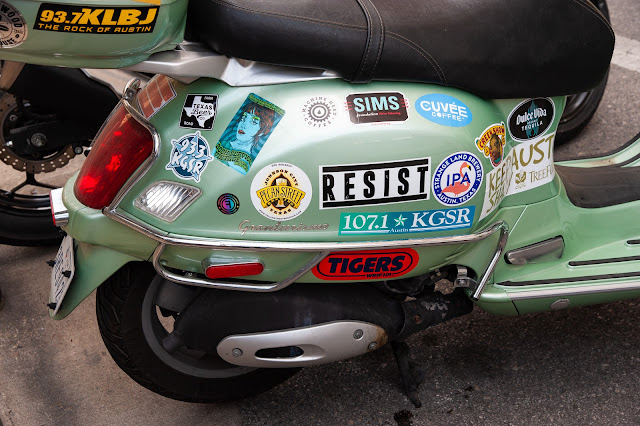 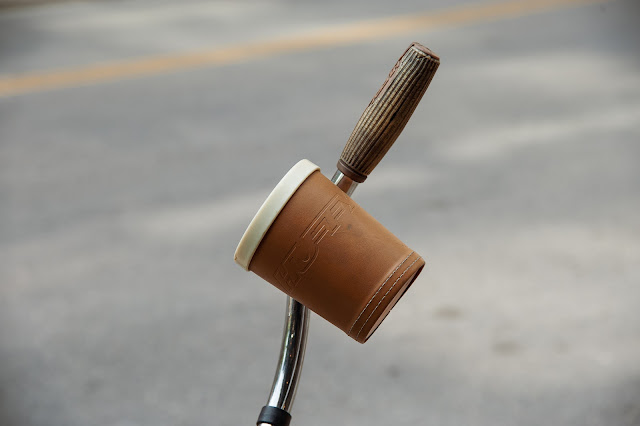 Posted by Kirk, Photographer/Writer at 20:46 6 comments:

The Lens That Came to Lunch. 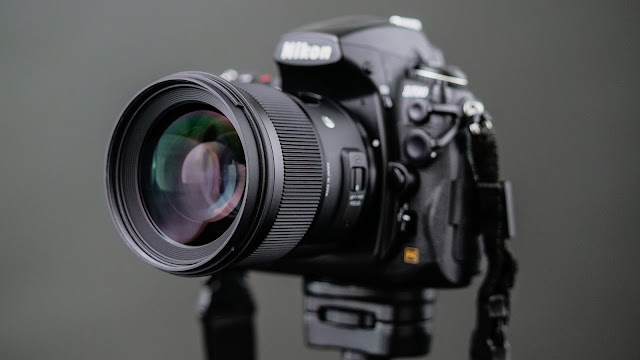 It was supposed to be a casual lunch with one of my best friends. We'd eat some good Mexican food and just catch up a bit about business, photography and the business of photography; as well as the state of the world, families and everything else.

As soon as we order our combination plates (enchilada verdes, enchilada mole, shredded pork, pickled onions and rice and beans, my lunch companion pulled out a bubble-wrapped package and handed it to me. I unwrapped it to find a pristine Sigma Art Series 50mm f1.4 in a Nikon mount.

"Since you're back into some Nikon gear I thought you might want to re-evaluate this lens. I believe you owned one not too long ago...." He said with a devilish grin.

I'd forgotten just how big and heavy this lens is but I've never forgotten the amazing performance this lens used to deliver for me. As you know the 50mm normal lens is the sweet spot of focal lengths for me and I'm happy to have this one in the fold instead of relying on the on the 50mm AF-D 1.8.

I picked up the check at lunch. It seemed the right thing to do...

Posted by Kirk, Photographer/Writer at 15:19 4 comments:

There's always a lot of "G.I." (Garbage in) but not nearly enough "G.O." The dirty little secret of how photo detritus builds up like compound interest. Trying to remedy that. 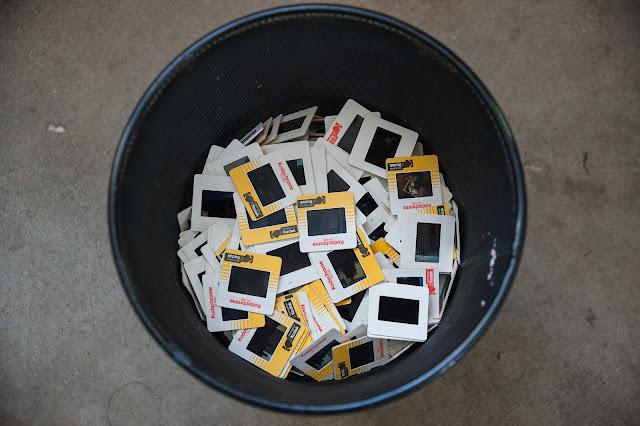 Behind a solid core door with a deadbolt is a secure closet on the south side of my office. I used to keep equipment in there when equipment was "valuable" but now that it's run of the mill it hardly seems worth the effort to lock it up. One stack that has been on the shelves in the secure closet for nearly 22 years is a series of 16 metal slide cases. Each case holds hundreds of 35mm color slides. It was always my intention to go through the images one day and pull the gold out from the dreck but not once in the last two decades have I even opened one of the cases, much less made any real effort to edit down this ponderous pile of transparencies.

All that changed when my mom passed away and my dad moved to an assisted living facility. My siblings and I ended up being with responsibility for going through the house where my parents lived for 38 years and separating things that could be donated from financial and personal papers that needed shredding or filing, from memorabilia that one or another of the siblings might actually treasure. We've saved nearly all of the snap shots from over the years and my brother has taken on the role of image archiver. The job of clearing out the house is overwhelming because my mom saved just about everything; from New Yorker Magazines as far back as the 1970's to boxes of pens which no longer write. Drawers and drawers of letters (old school social media!) and closets full of clothes which my sister routinely sent to my parents has holiday and birthday gifts.

My brother-in-law has worked at Barnes and Noble Bookstores for many years and, as a direct result, the house was also filled with thousands of books; mostly on politics and history. After three months of diligent work by my spouse and my brother and his wife we're finally seeing light at the end of a long and cluttered tunnel. A few more weeks and we'll be able to donate everything left over to various charities.

But this whole exercise has taught me a lot about our habits of acquisition and storage for all the material details of our lives. On a drive back home from one of my episodes of sorting and cleaning I started thinking about the sheer volume of photographic material I've generated over the course of my (happily) long career. In the last fifteen years almost all of the work has been done on digital cameras so much of the recent material exists only on CDs, DVDs and now in cloud storage and on large hard drives. But there are still tens of thousands of negatives, color slides and various format transparencies in little stashes all over my office. I've always had the best of intentions and figured that one day I'd sit down and sort through everything with the idea of ending up with a tidy little pile of stuff equaling about 100 of my best pieces. But, of course, I've never lifted a finger to get started.

But here's the deal, if I was to drop over dead tomorrow it would fall to Benjamin and Belinda to sort through my stuff and make the same hard determinations that I and my siblings are making about my parent's stuff. It hardly seems fair to make a young person, or your partner of many years, shoulder the burden of trying to decide what possessions of yours you would have wanted preserved and what to throw away. It almost seems like a prison sentence.

With that in mind I pulled the first box of slides from the closet and started sorting. There were hundreds of images; most of which I barely remember shooting and now realize that if I had really thought they were good I would have been using them and showing them from the moment of their creation. I tossed pretty much anything but photos of close family members. Images of Belinda were safe. There were no images of Ben in the mix because he came after these were all "safely" stored in their boxes and largely forgotten.

I thought there would be more hesitation on my part to part with all this material. It's images that I took at parades in San Antonio, parks in Mexico city and endless urban landscapes. Most of it is the kind of horribly bland work we used to create in our early years before our vision started to narrow down and become more selective. After I went through the first box I started on the second and then stacked the third and fourth boxes next to my desk in readiness for their execution.

Over the past few weeks I've tossed nearly 150 CD's that contained client work from the early days of digital. Most were files of headshots of people who might be retired but who most certainly no longer work for the start-ups that hired me and then evaporated into the industrial afterlife where bad ideas reside. If the contracting company no longer exists then there is no obligation of any kind to hang on to old work. Out it went.

My family's goal is to have the parent's house cleaned out and placed onto the market by the end of May. This goal setting led me to set my own personal goal of having all the old materials I've unconsciously let pile up here in the studio sorted and tossed by the end of the Summer. Reducing the clutter is already helping me be more economical in my image creation. And more vicious in my editing. But mostly I see my newfound vigor for tossing old work (and older paperwork) as a gift to my son and my wife. The more stuff I dispose of the less of their lives they will spend digging through it all and grappling with the guilt and uncertainty of what to keep and what to throw.

Fortunately we're not packrats in the house. We don't bring new stuff in unless we get rid of old stuff. If only I'd used the same rules in the studio..... 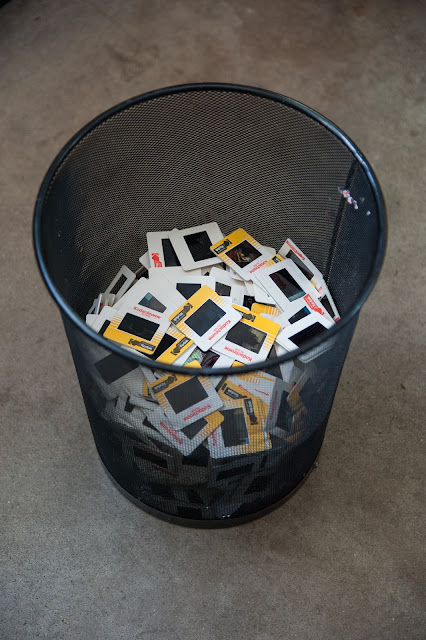 Friday. A good day to take out the trash.

If you want to save stuff for the kids try CDs, bonds or stocks, they'll appreciate them
more than a framed print of an anonymous space in downtown San Antonio.