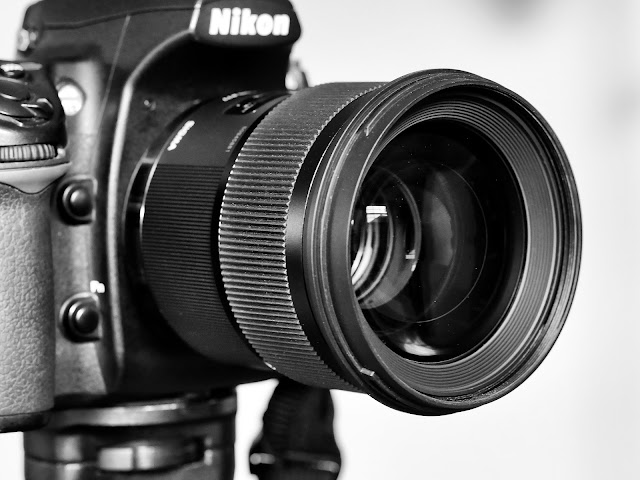 In this corner it's the Sigma 50mm f1.4 Art lens. Ten pounds (zany exaggeration) of prime glass and metal wrapped around a Nikon mount at one end. Priced for the photographer who just has to have the best performing 50mm lens with auto focus capability. 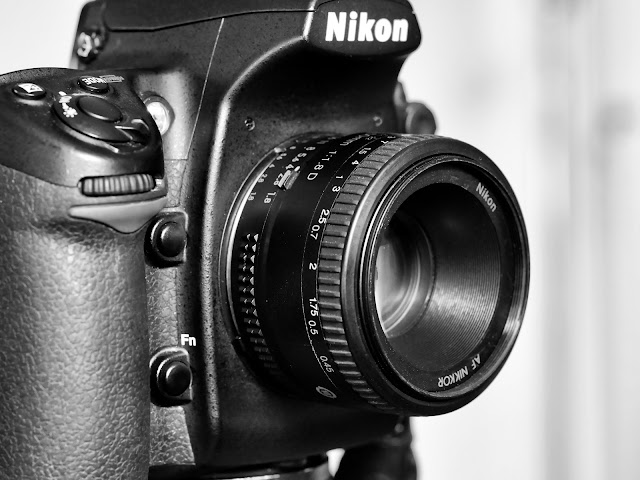 And in this corner, the featherweight, mostly plastic, screwdriver motor focusing, no rare element 50mm "nifty-fifty" ala Nikon. You can pick em up all day long at the used counter for less than the price of a decent Wagu hamburger and start shooting like HCB.

In theory I love what Sigma has been doing with their art series lenses over the past five years. This is the second copy of the Sigma 50mm f1.4 Art lens that I've owned and they've both been more or less optically perfect. My favorite lens test site, Lenstip.com gushes about the center performance of this lens, even when used wide open, and rates it as equal, or slightly better, to the Zeiss Otus 50mm lens which is at least three times the price and lacks AF.

When I shoot carefully with the Sigma and combine it with the right camera (any D8xx series Nikon) it's capable of incredible results. When you use f4.0 and nail focus you get files that give you amazing detail and contrast; far better than almost any other lens but the very best from the various makers. At the 50mm focal length I haven't personally used anything that will beat it. (But bear in mind that I haven't used the current APO series lenses from Leica!). For around $900 it represents a great bargain if.......

You have to use it with good technique to get your money's worth out of it. If you just need a lens you can stop down to f8 and shoot with an on camera flash you would be better off investigating some of the cheaper options. If you are a world traveler and want to/need to travel light then this is not the family of lenses for you because it takes up a lot of space in a camera bag and it's hefty. Very hefty.
If you shoot in the rain and surf then this lens is probably not for you. Nowhere in the promotional literature or in the specs doesn't Sigma make any promises about weather sealing, moisture resistance of protection of any kind in harsh environments.

I use it a lot when I want to shoot loose, environmental portraits in which I want high sharpness on my subjects, enough background to establish the location and also the ability to drop out the focus on backgrounds. At five feet from my subject, stopped down to f2.8 and used with a full frame camera I get a perfect editorial look.  For me it's a great lens. I don't mind the size if I'm driving to a corporate job and have my gear in roller cases. But you have to understand that for a 50mm lens it's huge and heavy. Way too heavy. I guess that's the Sigma trade-off for the best optical performance of just about any 50mm f1.4 lens every made.

With all this nano-acuity, superb sharpness and obvious (brag-able) lens gravitas why on earth would I fuss around with a cheap, plasticky, mass manufactured starter 50mm lens like the Nikon 50mm f1.8D lens from a previous generation?

Well, to start with you can pick up a clean and perfectly functional used copy for just a tad north of $100. While the Sigma Art lens is the operational equivalent of a Nikon G series lens ( no aperture ring) the Nikon 50mm f1.8D lens has a fully functional aperture ring which will allow you to use this lens in a fully manual mode with other brands of cameras via a lens adapter. That's especially cool if you need a good, cheap, long lens for your micro four-thirds hybrid camera. Or a good, manual normal lens for your new Sony A7III. You can use it on a Nikon....or practically any other camera out there which has a shorter sensor plane to lens mount flange distance than a Nikon camera.

The 50mm f1.8D is pretty poor performing at f1.8 but gets better and better as you stop it down. For handheld shots, using moderately good technique, the performance at f5.6 and f8.0 is hard to distinguish from the performance of much more expensive 50mm lenses (see above). While we seem to all love fast lenses the reality is that most of us are shooting most of our work in moderate to good light and, coupled with low noise sensors that deliver low noise at higher ISOs, we aren't pressed to use the widest apertures nearly as much as we once were. I say that the nifty-fifty is poor performing at f1.8 but I should explain a little better. It is not a flat field lens and won't give you a perfect linear/perpendicular plane of sharp focus. Like most lenses that share its design family it's got good performance in the center, even wide open, but the performance falls off because field curvature means that the outside areas of the lens focus in a different plane than the center. By f2.8  to f4.0 the effects of lens curvature on edge sharpness are largely ameliorated by the effects of increased depth of field.

The real benefit of the 50mm f1.8D is the smaller size and the lighter weight. It makes the camera system in your hand much easier to carry around and it takes up much less space in your camera bag. It's the lens to buy if.... you are on a budget. You work mostly around f5.6 and don't need to impress your fellow photographer friends. You need a beater lens that can be subject to harsh conditions without triggering your anxiety about lens damage or loss. It's the daily shooter for people who are tired of the weight that comes with perfection or people who have injuries or health conditions that make a much lighter lens a necessity.

The bottom line for me is that I find too much to like about each one of them to make a "final" choice.  If you already have the big Sigma you might pick up the smaller Nikon 50mm lens just to have something small and light when you are just out for a walk or an adventure, saving the bigger lens for more serious work on a tripod.

There are very few reasons to ever actually need the bigger lens over the smaller lens in amateur or professional work. The number one thing in the Sigma's favor is that it is much sharper wide open and close to wide open which allows you to isolate a subject via limited depth of field which still ensuring that what is in focus is spectacularly rendered. If I didn't want to blow money or do a lot of slow and considered work on a tripod I'd advise to just get the $100 lens and enjoy the hell out of it.

The difference to most users, even talented users, will be the difference between 92% and 98%. They are both decent enough for just about any subject matter but the picky users will see a difference in quality when all other conditions are good.

I shot both today and was happy with the results from each. See below for a size comparison. 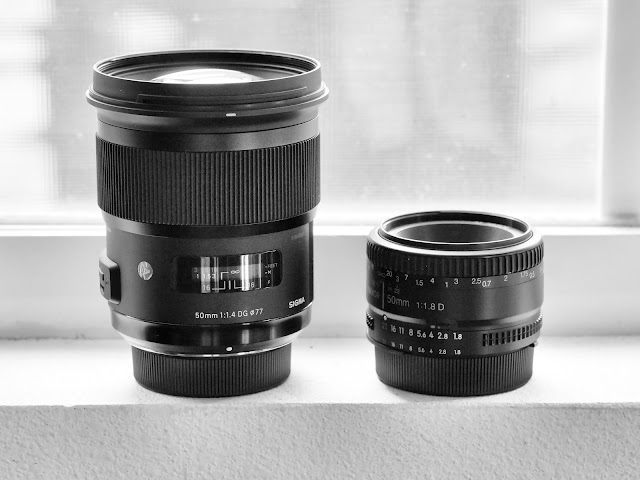 Life Notes: I'm heading to San Antonio early tomorrow morning. I'm closing the sale of my father's house. My brother, our spouses and I have spent the last six months emptying the house, organizing the outflow and getting the house ready to sell. We put it on the market a little over a month ago and got our first offer (and a contract) within 24 hours. Now I'll be able to cancel utilities, cancel the homeowner's insurance and stop worrying about the property while trying to sleep at night.

The closing is in the morning after which I'll have lunch with my dad and then spend the day by myself at the spectacular McNay Museum at the Austin Highway and N. New Braunfels Rd. Once the transfers are complete I will have successfully completed all of my responsibilities
for handling my mom's estate. After the house exits my continuous mental subroutine maybe I'll be able to concentrate more fully on making photographs and recharging my business of image construction.

addendum: Well, the didn't go as planned. I got the thumbs up from everyone yesterday so I headed down to San Antonio this morning. I left a bit early so I didn't have to drive my poor, beleaguered car through the hottest parts of the day. I was about five minutes away from the title company when I got a call from my realtor letting me know that the lender had a last minute screw up and the closing could not happen until Monday. I climbed back on the car and headed home. We'll try it again next week. Argh.

Swim notes: I stopped using fins at any time during my training over the last three months and have found my kicking technique in freestyle and backstroke has gotten much, much better. I also switched to using smaller hand paddles during stroke drills and find my turnover has gotten faster. A faster arm turn over with a more efficient kick is like Christmas coming early for a creaky, old masters swimmer. I like that!

Posted by Kirk, Photographer/Writer at 22:57 8 comments: 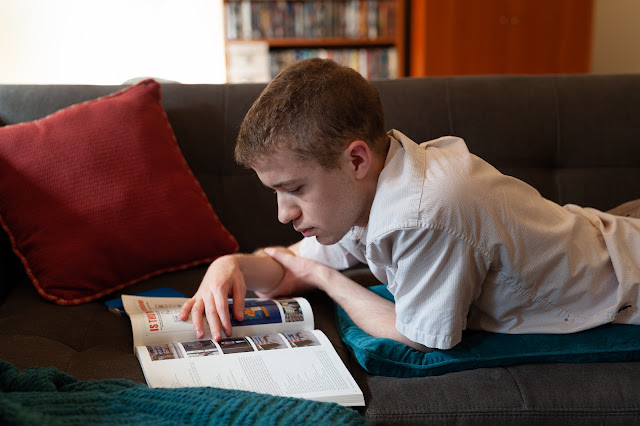 Many years ago I started out as an advertising copywriter. I would write anything for just about anybody. From public relations stories about model homes for local builders to smart sounding articles about medical or technology "breakthroughs." To be honest I will have to date myself and mention that part of my success was tied to the fact that I started in an age before word processors and my finest skills were being able to type fast, on a typewriter, and with few mistakes. I eventually learned how to massage the content too.

We've aimed him at accomplished pros in the business and he's been doing investigational interviews with them. Each person has given him a reading list which contains books and publications they think are crucial to the nurturing of a young person's ad career. So far several books are ending up overlapping in the multiple circles of the book recommendation Venn diagram. Regardless of the age of the mentor the one standout book that is a constant recommendation, for understanding both the history and the underlying creative process of advertising, is "Ogilvy on Advertising" by David Ogilvy. It appears to be the timeless bible of the industry.

Advertising is a tough business but not impossible to master. He's a quick study. We'll monitor his progress.