I packed a lens that I've come to appreciate for portraits in the age of small sensor cameras. 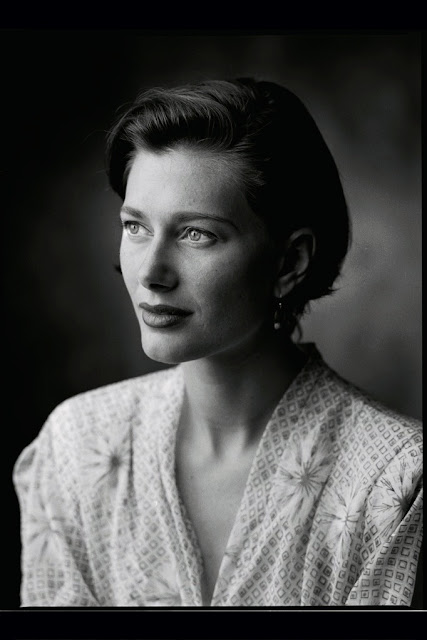 I think we're always comparing the work we do now with the work we did in the days of big sensors and longer lenses. The image above was done on a Pentax 645 camera with a 150mm lens. Today I'm traveling with a small Think Tank backpack filled with today's favorite cameras, the Panasonic G9s. I've been playing with lenses that give me a look similar to the portraits I've taken with older gear and I've come across a few winners.

While I love the old Olympus Pen FT lenses, like the 60mm f1.5, they aren't as sharp at their wide open apertures as some of the newer lenses. I've tried using some of the older Nikon 50mm lenses on the m4:3 cameras but they don't seem to match as well as I'd like. I've come to believe that most of the older, manual focus lenses were computed for film and not for sensors with a very high pixel density. The results look fine viewed small but when I enlarge the resulting photos there's not as much detail as I'd like.

A while back I bought a couple of lenses that were designed for the Contax Y/C cameras. They are Zeiss branded and most reviews done over the years have given them high marks. The one I like best is the Contax/Zeiss 50mm f1.7.  I originally bought it to use with the Sony A7 series cameras, and it was okay but it really comes into its own as a portrait lens for my Panasonic cameras.

The focus peaking works well and the ability to punch in to high magnifications to assure good focus is great. I'm fine using the lens wide open for portraits but the really great performance starts at f2.8. You could look at my collection of dedicated, modern m4:3 lenses and realize that three of the high end zooms cover that focal length and the 40-150mm Olympus Pro also provides a starting f-stop of 2.8. So why would I both to schlepp the Contax lens around and also put up with using an adapter?

Hmmm. Could it be that different lenses and different lens formulations have different looks? Different visual characteristics? (Of course....). But it's also the need to carefully focus the older lens that is part of its allure. There is a tactile pleasure in the eye and hand working in tandem to get bring a photo to life in the finder that has the look and feel you wanted but maybe didn't know you wanted it in exactly that way.

I packed the Contax 50mm just in case I have the opportunity this week to use it for individual portraits under controlled lighting. It doesn't take up much space in the bag so it's no big deal if the lens never sees the light of day this week. But if it does come out of the case I fully expect to be wowed....but in a very subtle way.

Travel news: I expected the worst this morning heading to the airport. I was out here in the middle of last week and it was crowded and chaotic. The Austin City Limits music festival wrapped up last night and I expected to see massive crowds at the airport with overwhelmed SkyCaps and long delays. I asked Belinda to drop me at the airport early and we left the house in a steady rain ( a cold front blew in early this morning and dropped the temperatures from the 90's yesterday to the low 50's today) and made our way through the morning rush hour traffic to Austin-Bergstrom Airport.

We were both surprised at the light traffic we experienced heading into the terminal drop-off area. I pulled the big case of lighting gear out of the back seat of Belinda's small Toyota (proud of myself for keeping it under 40 pounds!!!) and pulled the rolling suitcase out of the trunk. I tossed the new Think Tank backpack over one shoulder and pulled everything over to the American Airline's curbside check in.

There was no line. None. I had immediate and direct access to two Sky Caps. They checked me in immediately, charged me for my checked bags and wished me a pleasant trip.

I walked into the terminal expecting to see endless lines at the TSA security areas. I looked at my boarding pass to make sure I got the TSA PreChek label and headed to that line. Only there was no line. I walked in and placed the backpack on the conveyor and headed through the metal detector with my shoes and belt still on. Ten seconds later I was in the terminal and bewildered. What would I do with the extra time on my hands? Ah, I know, I'll write a blog post.

All kidding aside I was pretty stunned by how easy and quick the whole process was. The antithesis of my last journey during which I arrived two hours ahead of time and barely made the flight because of the overwhelming crowds.

I hope the whole trip goes this way. I'll be delighted.

Also, happy to report that I Vini, a restaurant in the Austin main terminal, has really, really great coffee. And exemplary service. At a reasonable cost.

Hope your day is off to a good start. I'm happy with the first fraction of mine.
Posted by Kirk, Photographer/Writer at 10:17 5 comments: