I know I should be packing for my big trip to Iceland right now so why was I in the Florida Everglades this morning and.... 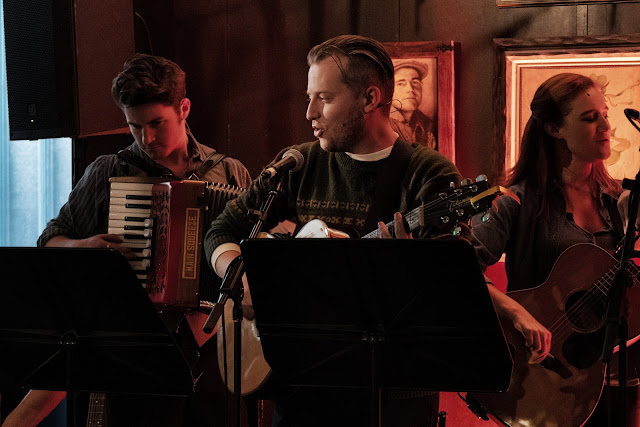 High ISO image from the GH5S at Zach Theatre.

..... and how did I end up in a weirdly anachronistic Hilton Hotel near Fort Bragg tonight? Oh, that's right, I'm a corporate photographer and I've been working on building a catalog of environmental executive portraits all over the Southeastern U.S. for a gigantic infrastructure construction company.
For the last eight days my schedule is about 4:1 travel to actual, on the ground, camera handling. The problem is that when you fly into smaller cities and towns in the U.S. there's rarely a direct flight from anywhere but one of the airline hubs. Yesterday it was Austin > Atlanta > Huntsville and then Huntsville > Atlanta > West Palm Beach, FLA (no, I didn't get to stay at The Breakers and no, I did not have another dinner at Mar A Lago).

Tomorrow is the last leg of the commercial job and I'll be photographing this leg in Fayetteville, NC. Then I do the Fayetteville > Atlanta > Austin shuffle. But, since it's the end of a long job and a few days before my birthday I decided to upgrade my flights back home to first class. A bit over the top for an arch Puritan like me but I think I'll be tired enough to rationalize it all tomorrow....You know, we 158 pound, five foot eight inch photographers really need the legroom....

The thing that will drive all the linear photo fans crazy about the last eight days though is the fact that the entire job has been shot on a Panasonic G9 and almost all of it has been done with the 12-60mm Panasonic/Leica lens. The system worked well in the flash FP mode today. I was shooting a bunch of portrait in bright sun (in the midst of swamp land, surrounded by pythons and alligators) and I did my usual technique of flying a 4x4 foot scrim over the top of the subject in order to block direct sun and then lighting the subject with a main light in a 3x4 foot soft box. I couldn't justify paying extra baggage charges to bring along a bunch of sandbags so I enlisted part of the crew we were with to hold the light stands and keep the wind from turning them into dangerous instruments.

I used a Godox AD 200 flash with a bare tube in the soft box and triggered it with a dedicated Godox flash trigger that's dedicated for Olympus (and by extension) Panasonic cameras. I was shooting in manual and the entire system worked perfectly. After my learning curve last week I left the bigger monolights at home and depended on the AD200 while keeping two smaller (but potent) Godox shoe mount flashes in reserve. I brought along two light stands but I also ditched the tripod (what the hell? We've been shooting in direct sun with a hight stabilized camera and lens......!!!) and was able to pare down to only one checked bag. I packed some extra clothes and my toothbrush in with the lighting gear.

So, the entire job was done with a small sensor G9 (not that there are big sensor  G9s...) and, for the most part, a single lens. The flash work was simple and straightforward and yet it all worked well and  could be handled by a single person.

The star of my gear collection over the course of the last two weeks is the little Think Tank backpack I bought on a whim. It's just perfect. It's my number one choice for camera luggage for Iceland. Under the seat in front of you.......YES.

I'm really getting excited about the trip to Reykjavik and beyond. I've taken out a second mortgage on the house to cover the cost of extra food for eight days and I'm waiting for Amazon to deliver a variety of rainwear, Goretex stuff and plug adapters. Well, actually, since I've been traveling to Europe on and off since 1978 I've got a whole drawer of adapters and the only things I'm taking that require electricity are multi-voltage devices; to wit: my MacBook Pro and the charger for my G9 batteries. I'm actually toying with the idea of leaving my phone at home.

In all seriousness I did take a few minutes to call my bank and have them add the ability to use a PIN with my primary Visa card and I did get in touch and let all three of my credit card providers know of my travel plans for last week, this week and through the 4th of November. Since someone else booked my flights and made my (fabulous) hotel reservations I thought it prudent to keep the guardians of my funds alerted and informed. Now, if I could only remember what that PIN actually is...

Home tomorrow for about 36 hours. Just enough time to check in with the family, pay some bills, check on my dad, do some laundry and repack the cameras. Oh, and to get in one more swim practice. And, yes, I am packing my swim gear in anticipation of hitting one of the in-city pools a couple of times over the next week to get some laps in. I'll count the trip a big success if I don't go broke paying for coffee and also get in a couple thousand yards on an every other day basis.

Can't say enough good stuff about the Panasonics. They may be small, light, agile and capable but that doesn't make them any less professional.

Posted by Kirk Tuck, Photographer/Writer at 23:15

Hardest thing to get used to? It will cost in the neighborhood of 300 Krona to buy a cup of coffee. (That's actually just a couple of bucks)

Happy Birthday and a great trip!

GX9? You, sir, are no pro! Just a pretender. Pros know you have to go BIG or stay home.

Of course, I'm just jesting. And I ain't no pro no mo'. Gave it a try years ago, but it interfered with what I wanted to shoot, among other things (e.g, not nearly organized enough).

I think each person, pro or no, must evaluate what works for him or her and use what he or she finds works best.

No hard and fast rules.

Thanks for letting us tag along.
Cheers

Hope you’ve got a holiday booked after Iceland. You may need a little recovery time from all this travel :)
Cheers,
Not THAT Ross Cameron

Happy Birthday, you will love Iceland. You may need to hock one of your G9 for a beer in Iceland.

Enjoy your family during your layover and have a very happy birthday.

wise advice on notifying your bank about your credit and debit cards. Depending on your financial institution I have had to do this while traveling inside the USA!

Thanks for the correction, Kirk. But really, what's an extra "X" among friends?

Regardless, between your and Mike's (@ TOP) praise of this sensor, I'm itching to try out it, be it in as G9 or another light tight box.