It's Sunday. It's Ben's turn to cook. And my turn to take photographs. 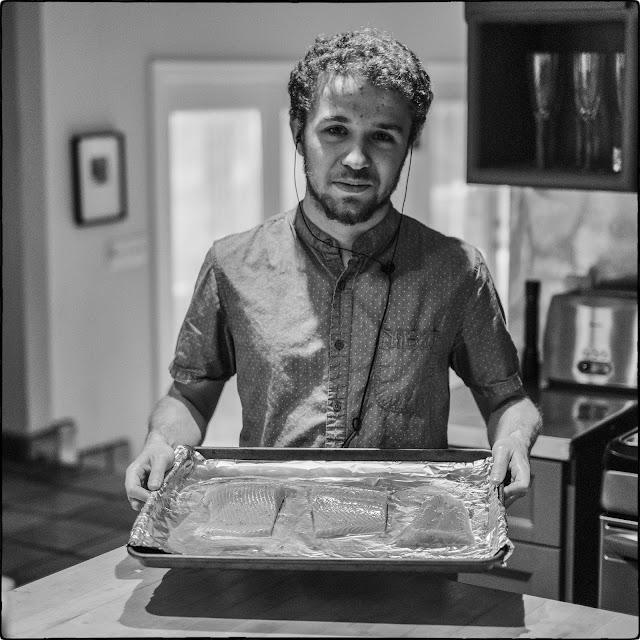 Ben preparing to put the salmon in the oven.

Ben is a good cook. He's had a couple of good teachers. When he was very young Patricia Bauer-Slate, a restaurant and bakery legend for decades in Austin, gave him a series of cooking classes and showed him how to use a chef's knife and paring knives to prep ingredients. I think he was about eight years old at the time. From that point on he liked to make his own lunches to take to school. His favorite sandwich being Sweetish Hill Bakery whole wheat bread, spicy mustard, slices of bleu cheese, calamata olives and a bit of pickle relish.

In the Summer before his first year of college our friend, Emmett Fox, owner of several fine dining restaurants here in Austin, announced that Ben needed to learn five or six great pasta recipes that he could make if he ended up cooking for himself in college. Emmett gave me a grocery list of ingredients and then showed up one Saturday morning with a bag of additional stuff. He handed Ben a chef's apron and an eight inch chef's knife and they spent hours in our kitchen with Emmett teaching and Ben learning how to make all the basic Italian pasta sauces. I think Ben now makes one of the best carbonara sauces I've ever enjoyed.

Ben and several friends shared an apartment at Skidmore College in his senior year and they all took turns prepping and cooking dinners. Ben got a lot of practice planning, shopping and cooking over the course of the year. Having spent a long semester in S. Korea the year before many of his recipes began to feature an Asian inflection. Now we have Kimchi here in the refrigerator..... 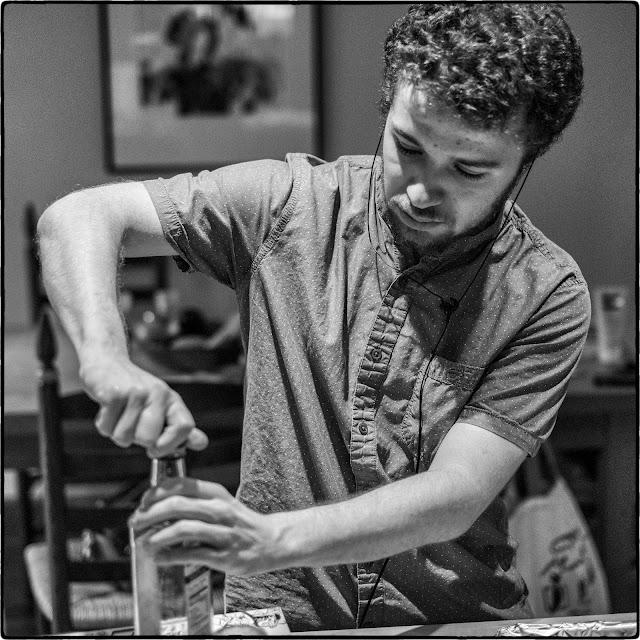 Sunday evenings are his turn to cook dinner for the family. Tonight he made one of my favorite meals; one he's become quick and proficient at. He broiled salmon fillets, made mashed potatoes and roasted Brussel sprouts. He's a great fish cook. His salmon is simple and elegant. Brushed with good olive oil an dusted with a light sprinkling of black pepper and sea salt, but it's really the timing that makes the difference. His fish is always perfectly cooked. Moist and juicy.

His mashed potatoes are well executed and his Brussel sprouts put the same kind of side dish from most restaurants to shame.

While he was prepping I grabbed one of my X-Pro2 cameras, set it the Acros film simulation and used the manual focusing capabilities of the camera to capture his cooking spirit. He was quick and efficient and I tried to bring the same ethos to my photography.

A note: It's my turn to cook on Wednesdays. Sometimes I actually cook but sometimes I cheat and get take out from our favorite Chinese restaurant. Or I'll get BBQ from our favorite joint (I won't name it because it could start a civil war amongst my Austin native friends). One of the hard and fast rules in our house is that whoever's turn it is to cook dinner must also do all the clean up afterwards. The idea came to Belinda and me long before Ben was in the picture. We were both working long hours at ad agencies and we'd take turns cooking dinner. We knew so many couples who divided the work. One would cook and the other would clean up. As a result neither partner in those relationships would ever get an evening off. We figured that if one person did both halves of the equation on their night the person not cooking (and cleaning) would have the evening off to relax. Each person would get alternate nights off for pure relaxation. It's worked beautifully for decades. Belinda and I had a great meal this evening with Ben and, when we finished, rinsed off our plates and put them in the dishwasher, we went into our living room to watch a movie while Ben did the pots, pans and assorted dishes.

Studio Dog is the only member of the family not obligated to take a turn cooking for the family. By consensus we've decided that she is far too busy keeping an eye on everything to even take a stab at doing a shift in the kitchen. She does, of course, insist on tasting some of the entrees just to make sure quality is up to snuff. It's vital work and probably why she needs those afternoon naps... 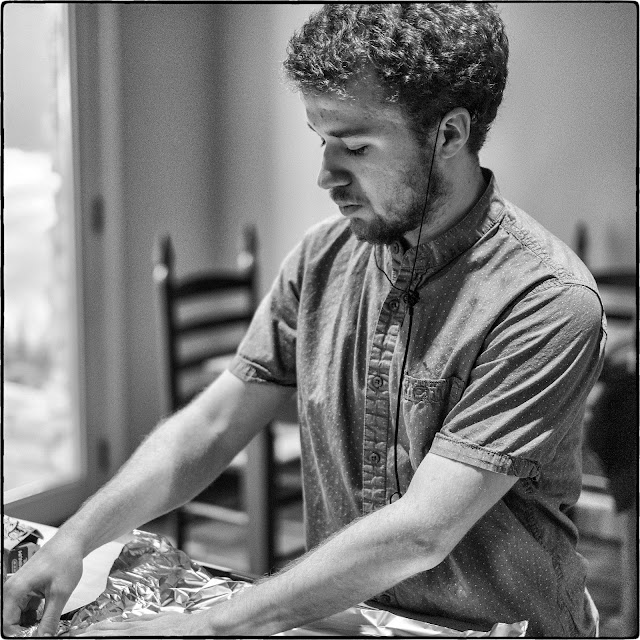 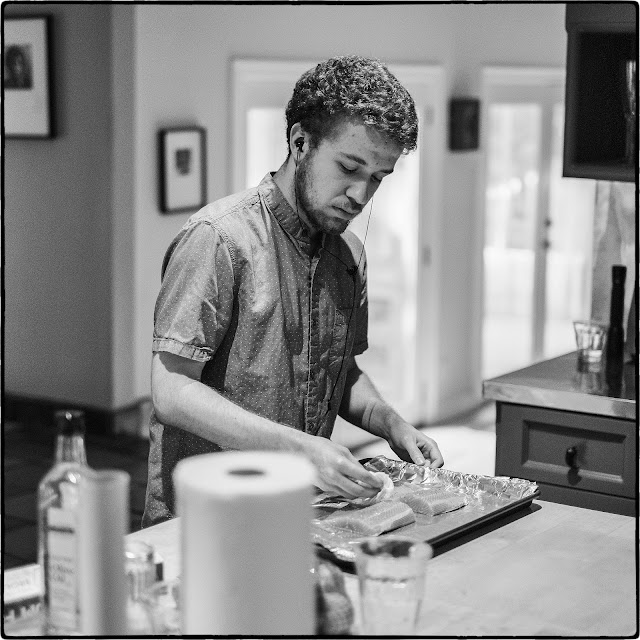 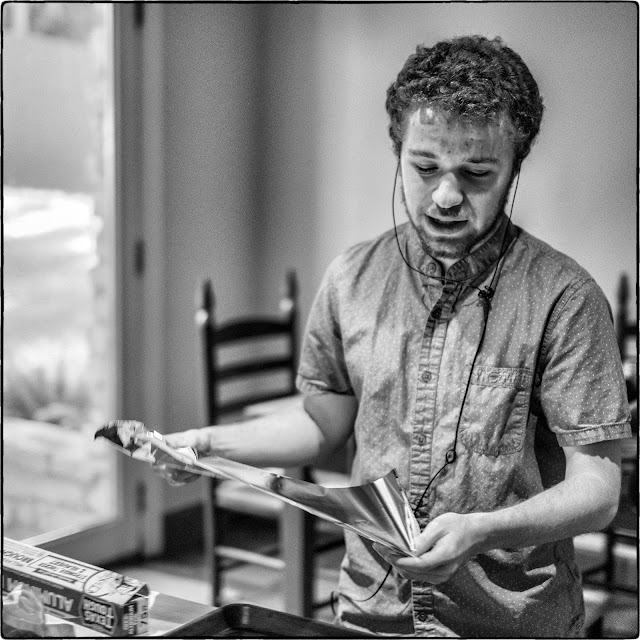 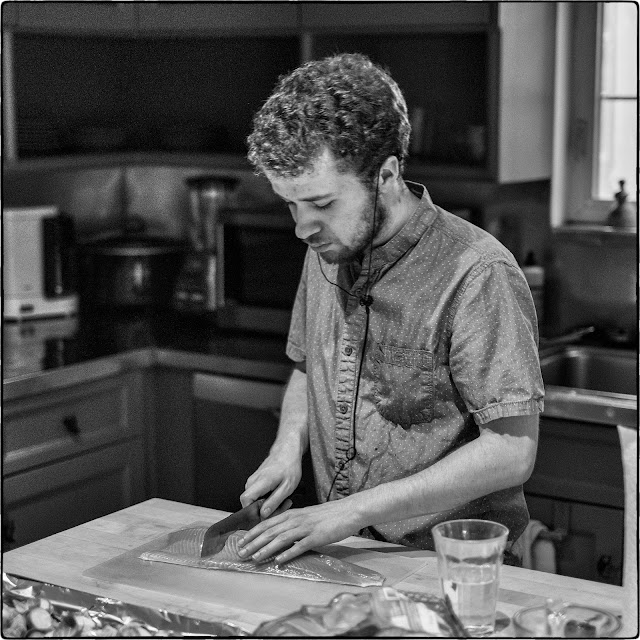 Posted by Kirk, Photographer/Writer at 07:30 3 comments: