I went "off script" yesterday and photographed the dress rehearsal for "Dracula" with a couple of Pentax K1 cameras. It wasn't insanely difficult... 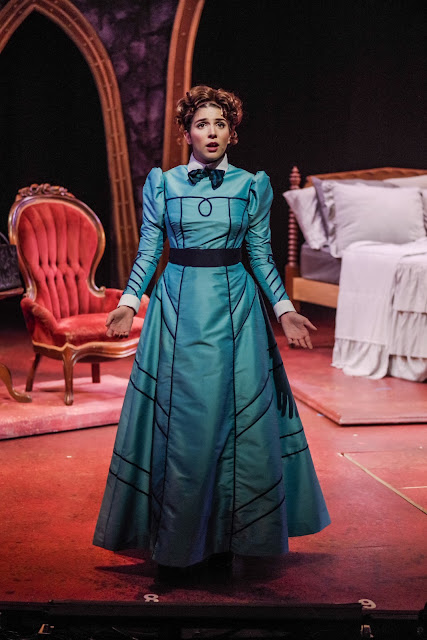 When we make a change, say from a DSLR system to a  mirrorless system, it's generally because the emotional part of our brain got triggered into desire mode by careful advertising, marketing, or some other lure, and our logical side of the brain is then given the (after action) task of rationalizing our emotion's actions. We might never know what compelled our emotional brain to ditch a perfectly good system and venture into the great unknown but we know it probably had to do with a deeply held need to keep up with the Joneses, a need to make a statement about where you fit into the social hierarchy, or the idea that having the latest and greatest stuff might make you more attractive to the opposite sex, thus tipping the scales in your favor that you might one day mate and replicate. All this desire is mostly driven by thousands or millions of years of evolution and there's very little you can do about it.

Funny to think about how desire pushes a species forward on a general basis (desire for consistent food supply helping to create agriculture?) while it can actually impede the happiness of individuals. For example: you might think spending money on a Sony A7R mk4 will make you happy. Happier than you are now with your Canon Digital Rebel. You scrimp and save, spend more time at work than you'd like, and then you walk into the camera store and finally buy the camera of your dreams. For a while you are happy. Everyone around you is impressed with your new camera. But then adaptation takes over and you get used to your camera. Familiarity breeds contempt. The fizz wears off. The sparkle seems to dull. And you start saving up for the next big purchase which you hope with bring you lasting happiness and which will change your life. And you follow this pattern until you can no longer afford to make these kinds of emotionally driven camera purchases. Or you impoverish yourself through the misuse of credit...

You've lost the opportunity to invest the money you spent on cameras and you've lost the income's ability to purchase necessities that might have actually improved the quality of your life, your relationships, and your actual social position. You've effectively traded real happiness for short term attempts to be happy through ownership of stuff you didn't need but allowed the linked camps in your brain to foist upon you.

And the logical part of the brain (which is actually very rarely consulted during the ramping up of desire and the final culmination of the buying cycle) is repeatedly called upon to do the heavy lifting. It tells us that 2 more megapixels will make a profound difference in our work. That 1/3 of a stop more dynamic range will fix everything that currently vexes us. That having a mirrorless camera will make us "future proof" and will provide so many vital features that it just makes sense to own one. There's even a special sub-routine in the brain that clicks in to help us rationalize things like the construction of our desired object in carbon fiber or titanium. The logical side of the brain instantly supplies the rationale (after we've bought the new camera) with something like: "Well. In the near future we'll be moving all of our photography work to nature and wildlife images and the titanium will reduce the weight of our kit and also add more strength to the body. The new camera will last much longer, making the selection of the "Boy Metal" a long term.....investment, when compared to a traditional finish..."

So, what I've found when I've made the plunge into a new system or a new kind of camera (mirrorless versus DSLR, for example) is that my logical brain jumps in to bail out the emotional part of my brain, which seems to have an iron grip on my wallet, reduce the post purchase second thoughts (post cognitive dissonance) with wave after wave of reasoned justifications. My current favorite is that I must  have the latest Fuji mirrorless cameras because the ability to pre-chimp is so vital to my success in capturing good images during dress rehearsals at the theater. If there's no time to test lighting and to make changes on the fly then seeing the preview of an image in the EVF (pre-chimping) helps me to make quick changes that ensure my success. Which ensures my place in the social hierarchy. Which should make me happy.

When I picked up a couple of Pentax K1 cameras I'm certain it was an impulsive act driven by a recent deposit into one of my accounts of cash I didn't need in the moment. I was either rewarding myself for completing a long and arduous task or taking advantage of a disruption in the dealer's pricing model when I made the purchase. The after-action booster talk from the logical part of my brain mollified me by assuring me that the full frame sensor in the new cameras, in conjunction with the 1:1 format, and a handful of lenses, would open up a brilliant new way to make classic black and white portraits in the studio; where I would have the leisure to use live view to nail perfect focus. Another argument my brain dredged up was that a new system might motivate me to get back into the game after a tough year of domestic administration. Either argument could have prevailed because what my brain was interpreting from my emotion's actions was that I deserved the new gear and I could afford it without negative consequences. Well done, logical and emotional brains, you saddled me with yet more gear....

Just for grins yesterday I thought I'd repudiate my logical brain's argument about the need for mirrorless cameras in order to do my best job in live theater photography. I had agreed to photograph the marketing images for ZachTheatre.org's new production of, "Dracula"  and I thought I'd substitute the older, DSLR technology and see just how "important" those mirrorless attributes actually were.

I got off to a slightly rocky start but soon settled into the old way of working with cameras that expect me to know what I'm supposed to be doing. Exposure and color balance are always the linchpins for a good theater photo, I don't worry much about focusing because I seem to have that figured out. At first I thought I'd need to shoot exclusively in raw, just as a safety net, but after the color temperature I'd set matched what I wanted to see in random image reviews I felt fine switching back to fine Jpegs and blazing through the show.

Both lenses worked well and that's saying a lot when it comes to the 28-105mm zoom. It's basically an upscale "kit" lens and I was using it mostly wide open, which has got to be the worst case scenario, but it seemed to deliver sharp and well detailed images 95% of the time. The other five percent are probably due to my sloppy technique or a mis-focus while shooting a very dark and contrasty scene.

The 100mm Macro lens was slower to focus but when I got the focusing right the images were great. I shot that lens at f3.5 which is about a third of a stop from wide open and got good images from it as well.

The trick to shooting the K-1 cameras under low light is to be patient and wait for the green confirmation light to come on before committing to the final shutter push. It's an interesting kinetic ballet (and what kind of ballet would not be kinetic) that requires one to time stuff around the time it takes for the camera's focus to lock in.

When I looked at the images today on my computer I was happy with the rich tonality the presented. Then I remembered all the hundreds of shows I'd photographed with SLRs, DSLRs, actual rangefinders and even medium format cameras over the course of nearly 30 years and reminded myself that the camera is secondary to the instruction book in your brain.

Mirrorless cameras can make stage documentation easier a bit easier and can be less noisy, but you can still do great work with antiquated cameras ---- if you take your time and have the right mindset. I will say that the sensor in the Pentax K1 is less noisy at 3200 and far less noisy at 6400 than my X-H1s but the trade off is that the X-H1 and the "killer lenses" (90mm f2.0, the 50-140mm f2.8, and the 16-85mm) focus much more quickly and lock in with more authority. 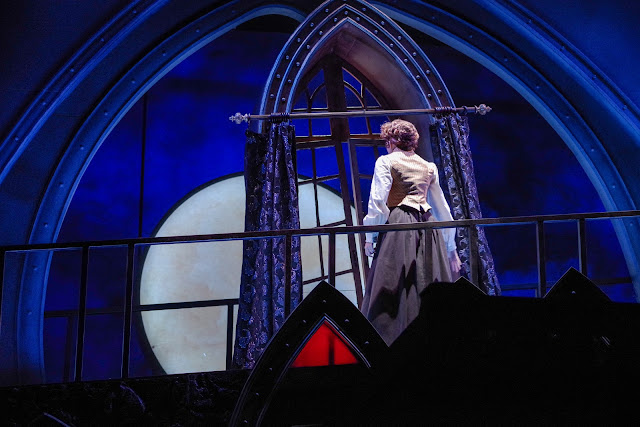 Not quite ready to try photographing theatrical stuff with my iPhone. I think I'll have to wait a rev or two for that.....
Posted by Kirk, Photographer/Writer at 18:35 8 comments: