Another black and white comparison. I just had to see which one I liked better. 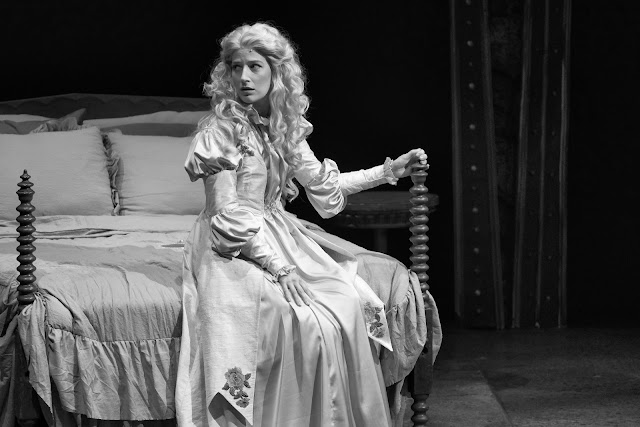 In this case I prefer the color. I like the skin tone. It's got just the right amount of "eeriness" 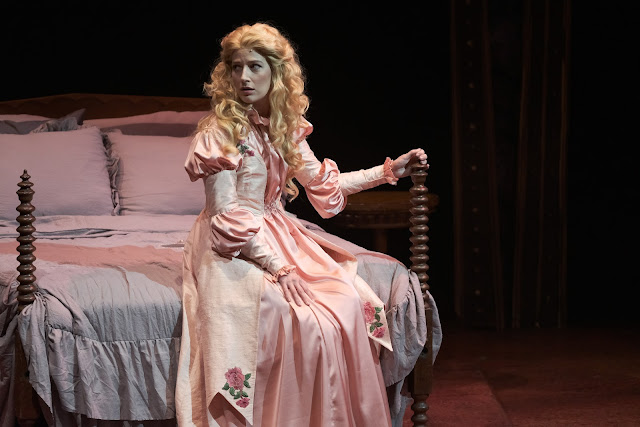 From our photographic coverage of the "Dracula" play at Zach Theatre.

Posted by Kirk, Photographer/Writer at 12:12 6 comments:

I was tooling around with a Lumix S1 this morning. I wanted to see how it "felt" with a Sigma 45mm lens on the front of it. 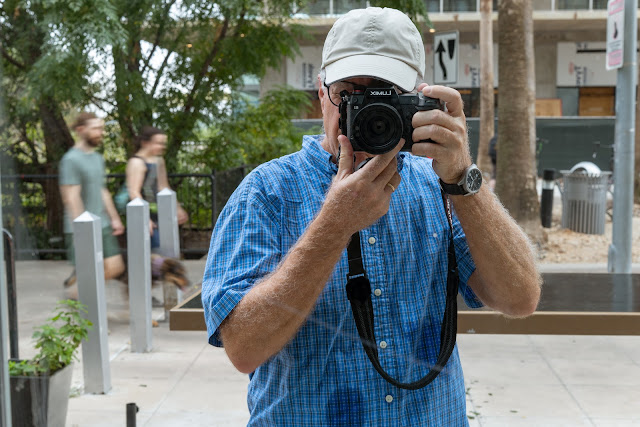 Sweaty and hot as Austin continues to set new weather records with temperatures
nudging 100 degrees Fahrenheit in the first week of October...

I've had a Panasonic Lumix S1 sitting around the studio since the last week of September. It makes really nice photographs but the camera body is really heavy compared to just about every other mirrorless, full frame camera out on the market right now. Maybe not as heavy as something like a Nikon D5 or a Canon 1DX, or even a Nikon 850 but.... heavy enough. I compounded the size and weight issues by adding the  Lumix 24-105mm f4.0 lens to the mix when I acquired the camera, which follows the current full frame lens trend of being... bigger. And heavier.

After using the camera in tandem with several other brands of cameras I'd pretty much decided that while it's a great "work" camera it might not be my first choice (or even my second choice) as a travel camera. With the zoom lens attached it would make walking around shooting in urban settings more of a burden than a blessing. Not quite as bad as spending the day with a Fuji GFX 100 + lens over one shoulder but close, very close.

Belinda and I are leaving for Montreal on Saturday to have a little vacation, get ourselves out of the relentless heat, and to avoid the additional 100,000+ people who are coming into Austin for the Austin City Limits Music Festival, which starts this Friday (Good Lord, what is wrong with people that they'll spend hundreds of dollars for a ticket to sit on the hard dirt and open sun in 100+ degree heat, inside a chain link fence, to hear bands play their music over giant speakers in the least acoustically pleasant environment one could think of? And to pay outrageous prices for water and food into the bargain? Just stream the music on your phone and get a decent pair of headphones --- cheaper, more comfortable and better sounding).  Sorry, a person prejudice against large, outdoor concerts...

Back on the subject:
On trips where I don't have to come home with salable images I actually have more of an issue deciding which cameras and lenses to drag along with me. "It's a vacation." I tell myself, and then I get into an argument with myself over why I need to take along something more than an iPhone. It's crazy to feel like I have to nail every shot, especially when we're mostly just going to do touristy stuff.

When we first discussed going on a trip I immediately thought I'd be happy taking along a Fuji X-Pro2 and maybe the 23mm f1.4 and the 56mm f1.2. After thinking about it for a while it evolved into the two lenses and an X-H1 (for the image stabilization). Then I went on a little shooting spree with the Pentax K1 and bounced around the idea of the K-1 plus the 28-105 zoom lens. The body has great I.S. and the lens is more than decent. I still like the idea but that shutter is a bit loud and I might really miss the EVF-ism of the other cameras. Then I found myself messing around with the Lumix S1 and got all excited about the (absolutely killer) EVF and the amazing image stabilization and started thinking about taking it and the zoom. But the bulk of the zoom and the body together dissuaded me...

In passing, one of my photographer friends mentioned to me that Sigma (a signatory to the L-mount consortium) was putting out interesting, and quite good, lenses for the L-mount cameras. In particular he suggested I check out the small, light and gorgeously designed 45mm f2.8 L mount lens. It's certainly not the fastest option but it sure is an interesting one.

It's a  near normal focal length lens that's designed to have great character when it comes to the rendering of out-of-focus areas when used wide open and, when stopped down just one stop from wide open, it's supposed to have high sharpness and otherwise desirable imaging characteristics. The lens is built mostly from metal, has its own external aperture ring(!) and comes with a metal lens hood. The current price is $550 and I should mention that it's also available in the Sony E mount.

The lens is designed with eight elements in seven groups and includes two aspherical elements in its design. It's nicely light and compact and dramatically reduces the overall profile of the Lumix camera package.

I need to shoot some more images with the combination of the S1 + the 45mm this afternoon in order to convince myself but the camera and this one lens are my current leading contenders to make it onto the Montreal trip with me and Belinda. I'll stick a 128 GB V90 card in the #2 slot, set the camera to large, fine Jpegs and try to disconnect from being too technically involved.

In other news I'm finding that the Fuji X-H1 is highly competitive with the Lumix camera when it comes to shooting video. A quick test shows me that I'm happier with the Eterna profile in the Fuji than either the Flat or Cine-D profiles in the Lumix. When I get back from Montreal I'll load up the Log functionality in the S1 and do a direct comparison against the Fuji F-Log (that comes free in the X-H1) and we'll see who is really the boss of 4K video.

Currently packing for the trip. The goal is to get everything I'm taking into one smallish, lightweight carry-on. I'm going back and forth about which shoes to take. Hopefully the cameras will get sorted out after a bit more experimentation with the S1+45mm. I may give up entirely and just take my new-ish iPhone....

A final note for today: If the political environment gets any more crazy here, with a full-on dictatorship blossoming as we speak, we may just stay in Montreal and send for Studio Dog. Just sayin.

Posted by Kirk, Photographer/Writer at 12:10 28 comments: