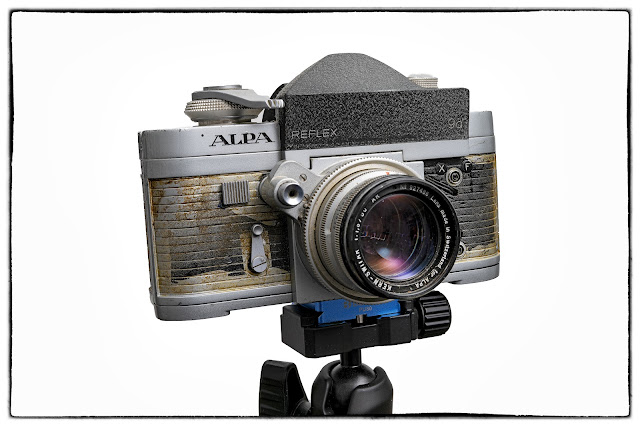 Alpa 9D with 50mm f1.8 Kern Switar.
The construction of this particular camera makes the new
Leica SL2 look like a Holga by comparison....

Years and years ago I found this Alpa 9D Reflex camera and its partner lens in an ancient camera store in San Antonio. It had its original black leatherette back then but we had to take it off to do a repair and never got around to re-cloaking it. The camera and lens were both built in very small numbers in Switzerland. The top and front of the camera body are all made from a solid, milled, single piece of space age alloy (really, mostly stainless steel) while the removable back and bottom are twice as thick as a Leica M removable back, and the inside workings look as though the camera was made to lounge about in a surgical lab somewhere, looking amazingly precise and well finished.

This camera was as basic as it gets, but "basic" with over 700 finely made (think: fine automatic watch) mechanical parts. It had a rudimentary, center weighted meter but no hot shoe, and the lens was focused wide open and then stopped down to the shooting aperture as you pushed the front mounted shutter release. Even the wind knob (which still works as smoothly as polished motor oil) is different from any other model or brand of camera I've seen.

The specs are ordinary for the period of time in which the 9D was current; shutter speeds from 1 second to 1/1,000th of a second. Flash sync at 1/60th of a second. There are sync sockets for both X sync, FP sync, and M series flashbulbs. The single piece of plastic on the camera is a little window that surrounds the shutter speed setting dial and allows the operator to see what shutter speed is set.

The Kern Switar lens is equally bare-bones. It's non-automatic and has non-linearly spaced f-stops from 1.8 all the way to f22. It focuses down to a little less than 1/8th life size. You need to stop down the lens to meter but the lock allows you to do so without accidentally triggering the shutter while metering....

I used to use my Alpa for "hobby" shooting but it's a slow-to-work camera and, with Tri-X film, I didn't see any improvements over my "much quicker to operate" Leica M and R cameras and lenses. By today's standards it's like working in ultimate slow motion when compared to the latest digi-cams. Earlier SLRs like this one also had dim focusing screens and were notoriously difficult to focus wide open.

Every once in a while I pull this camera out of its storage space to remind myself that one actually had to know what they were doing in the earlier days of photography to be successful image takers. Just getting an acceptable image took time and real effort. We are so spoiled today. But I did insert a roll of Tri-X into the precision innards of the camera today and took some photographs. I'll keep at it until I finish the roll. Not so much to make my own art but to, in some way, channel an era/knowledge base of our craft that is quickly being lost to the collective consciousness of today's photographers. God the camera feels nice to use!

This was my rain, shine, dust storm, perilous and foolish stunts camera.
It shows...

Posted by Kirk, Photographer/Writer at 18:28 9 comments: