I've been mulling over a concept that reviewers of the Leica Q2 keep mentioning. And how it applies to my cameras. 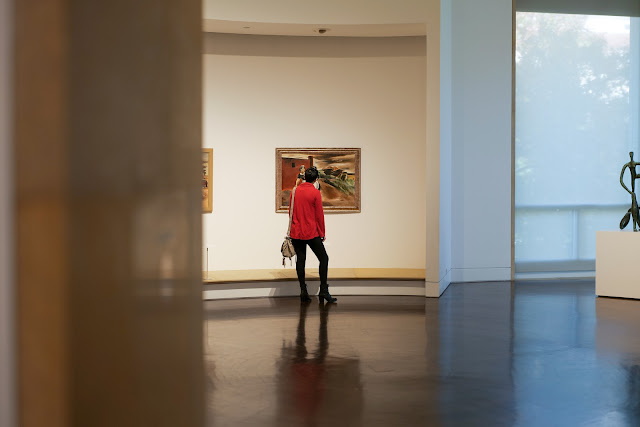 I photographed this at the Blanton Museum. When I wrote about the photo a while back I mentioned that at 100% magnification you can clearly see the weave of the sweater the person in the frame is
wearing. Down to the threads. Part of the coolness of a 47 megapixel camera and
a really, really good 50mm lens.

I'm not really price sensitive when it comes to cameras; but I'm thinking you've guessed that by now. If Leica made their Q2 with lenses other than the 28mm I might consider buying one and trying to convince myself that I'd finally be able to do great art with it. What focal length lens would I like? Nothing exotic. How about a 40mm or a 50mm? And I'd be happy enough if it was an f2.0 and satisfyingly sharp when used wide open. But alas. They haven't offered an alternate configuration. I'd be happy to co-brand one with them as the Visual Science Lab Normal Limited Edition...

But the concept I keep hearing from everyone (Leica and reviewers) is that the sensor in the Q2 is so good, and the 28mm lens on the front is so exquisite, that one could consider the camera as an all purpose, multi-focal length, imaging tool because the combination of the high resolving sensor and the equally detailed performance of the lens means you can do a bunch of serious cropping in order to get just the angle of view you want with no fuss. So, if you want a normal focal length look you could crop down to an APS-C style crop and you would get yourself a Leica 42mm lens for free. Or at least for no extra charge. Sure, you'll only have about 23.5 megapixels left to work with but I think most of us would agree that it's enough for just about anything you may desire. And those would be Red Dot/Leica pixels into the bargain.

While I like the idea of a flexibility in lens selection (and being able to take only one lens along with me) I don't particularly care for the idea that I'll be composing in a very wide frame and having to use my limited powers of visual conservation to derive, at the time of shooting, exactly how I might be cropping. If I have an EVF at my disposal I'd like to see the crop while I compose the shot.

I know that some of you can look at a hugely wide image in a finder and decide, unerringly, just exactly how you'll crop it in the future, and that you can do so without recomputing even an inch of variance after the fact. But I can't. I want to see the frame lines, the boundaries, the edges of the imagined frame. That's probably why the Leica Q2 is not on my short list of drool-worthy cameras....

But the idea of being able to fine tune focal lengths centered around one lens started me thinking and the concept keeps circling back around in my brain and taunting me.

On Sunday night I went to a working performance of graduating senior drama and performance students at Zach Theatre's Nowlin rehearsal space. The space is huge and great for dance and movement. It can also hold a fairly big crowd of parents and friends. But where the space falls down is in the lighting. Since it's a rehearsal space and not a performing space the lighting is just barely utilitarian for the purpose. Buzzy, flickery florescent lights set high, high, high up on the ceiling about 30 feet up. No side lighting at all, and a black curtain spread across the back wall. I was volunteering for this one; just for the fun of seeing all the new talent, and the joy of playing with two new lenses. Lenses that I will quickly admit were not well thought out for this particular situation....

I'd packed two S1R bodies, the Sigma 35mm f1.4 and 85mm f1.4 Art lenses, and not much else. I didn't know we'd have an audience of any size but when I arrived the space was set up with at least 100 folding chairs. There wasn't a fixed stage and I couldn't get closer to the talent than the first row of audience seating. Hmmm.

I'd be fine with ensemble shots, set up, multiple actor scenes, and anything with two or more people involved but there was a whole program full of individuals who would be doing dramatic readings, singing solos, dancing and standing in a wide sea of black drape. If I had been shooting this as a stage show I certainly would have brought along the 70-200mm lens for tight, individual shots. At 200mm I'd have a shot at making mid-torso to top of head shots too. But I came less prepared than usual and immediately felt photographically under-equipped.

Until the Leica/One camera/One lens concept floated back into my consciousness.

I had 47.5 megapixel cameras in my hands as well as fast, state-of-the-art lenses. I didn't need to worry about getting sharp images from either lens and, if I used them at f1.4, or even at f2.0, I could keep the ISOs low enough to make certain I was getting optimum image quality in the files.

Then I found the Ext. Teleconverter Mode in the camera menu. I could easily toggle between a full view and a 1.4X crop. This would give me (with the 35mm lens) both a normal 35mm and a bit tighter 50mm look without much loss of quality. And, to make me more comfortable the frame would be accurately depicted across the entire EVF. With the 85mm lens I would also be able to get (and properly view) a second focal length of about 120mm which would get me into the compositional zone I wanted.

To use the crop/teleconverter mode I would have to set my camera to the "medium" file size setting and "make do" with a "paltry" 23.5 megapixels. Woe is me.... (sarcasm implied).

So, with two lenses I got four different focal lengths: 35, 50, 85 and 120. The files were all much more than adequate and they tightened up well in post production.

All of this craziness got me thinking about another assignment that's coming up on Thursday. I'll be shooting lifestyle portraits on location at a high tech company that offices in a beautiful building downtown. This might also be a "two lens X2" shoot. I'm planning on taking the Panasonic 50mm f1.4 S Pro and the Sigma 85mm Art lens and using the flexibility of the teleconverter mode on the camera to give me more options. There is even a "zoom" option that will allow me to use every length between the normal angle of view and the maximum (1.4X) crop. Now, rather than looking for new, precise focal lengths, like a 100mm portrait lens (a nice length) I can take advantage of the very high performing and very fast lenses I already own.

In the instance of the lifestyle shoot on Thursday you might wonder why it's so important to see the "crop". Well, I'll have an art director and client in tow on that shoot and would only like to show them the actual crop rather than showing them a full frame version made at the widest angle and then asking them to use their imaginations. Funny how that doesn't work in most advertising situations.....

The one caveat to working this way is that the teleconverter option is only available for Jpegs. If I decide that I have to shoot in raw then were back to traditional camera and lens use and I'll incorporate the 70-200mm if I need something longer than the 50mm and 85mm. I'll bring them all with me and see what works best.

Now, off to call Leica and see if they want to sponsor my VSL limited edition Q2 with a 50mm Summicron on the front. I'll need to approve the special denim fabric "leather" and add my arcane signature somewhere before we finalize everything. But I need to let them know that I can be a bit showy and might want to have more than one Red Dot on the camera body. And I might want the dots a bit bigger.....

This is what Studio Dog thought of the idea when I mentioned it to her: 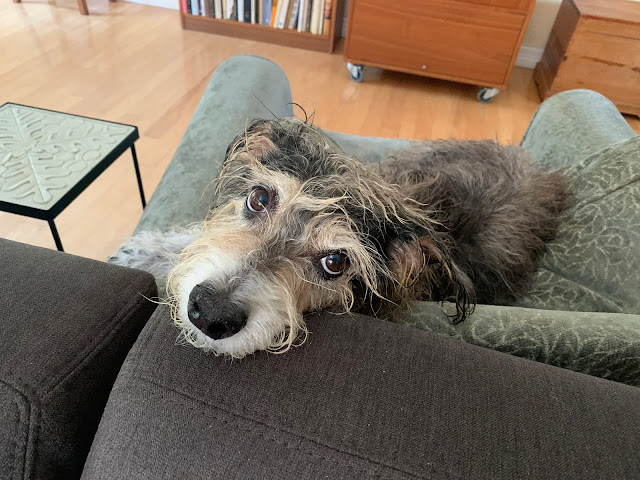 Posted by Kirk, Photographer/Writer at 17:04 18 comments: