Here's a fun video Joshua and I made for Zach Theatre's Production of "Every Brilliant Thing" last month:

We shot this in an hour or so on a rainy afternoon back in early February. It's a bit rough in places but there were no rehearsals, no crew and no control over the locations.

I used a Lumix S1 camera with the V-Log update but I shot in the flat profile instead of V-Log. We used the 24-105mm lens and stabilized in an "old school" manner with a monopod.

The mic is a Rode reporter mic and I broke all the rules by using it with ALC (automatic level control).

It's a good message. Enjoy.
Posted by Kirk, Photographer/Writer at 20:18 10 comments: 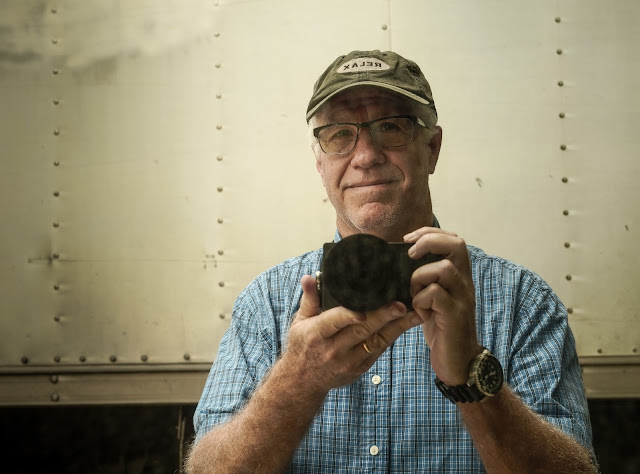 The photograph, just walking around and trying to blend into the landscape.

Since there are no jobs and no swim practice I've been getting up later than usual. I have the bad habit of reading the news over coffee and kale pancakes and the news lately always tastes bad. Maybe it's the kale. Maybe I should buy some kale syrup or something. At any rate watching the Dow Jones average plunge under 19,000 was a poorly conceived way to start the morning...

I needed a break from the ongoing crisis and I needed some exercise so I laced up my favorite pair of walking shoes, grabbed my (current) favorite camera and got busy. Walking in Texas is not forbidden or discouraged. As long as we maintain good social distancing it's something we're actually encouraged to do as a remedy for "cabin fever." The route I did today was about four miles and it was perfectly pleasant weather for it.

I've been using the Sigma fp camera all the time now. I don't think I've taken a Lumix out for anything other than an assignment in the last two weeks; maybe longer. The fp is small and light and I love the images it makes. I've been playing around with the cine setting which in no way is accurate or even always pleasant. I've discovered that you can dial in the strength of the color settings so I've pulled the cine color setting back to minus two which should bring it a bit closer to "normal" color. I think it's still a bit green but I kind of like it. 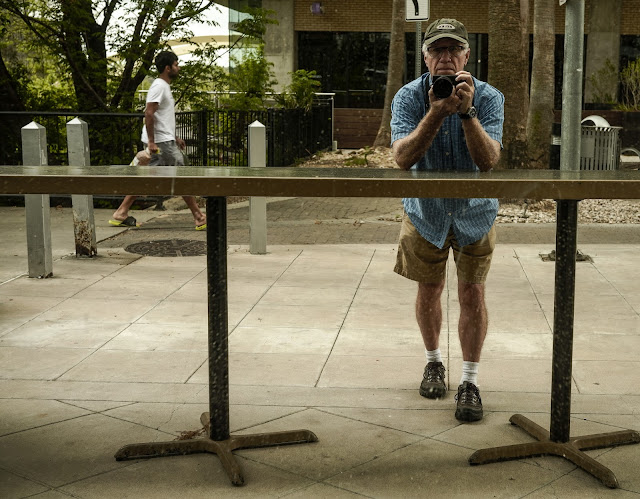 Since all the pools everywhere within a hundred miles are closed I've taken to a new
routine. Walk briskly for four or five miles and then, at some point in the day, do
100 push up and 100 sit ups. It's still a workout but nothing like the intensity
of our typical swim workouts.

As you probably know, all of the restaurants and coffee shops have become "Pick up and take away" only. You can walk in and head to the counter to order but you're expected to leave as soon as they hand you your product. All the bars are closed. And if I had to guess I'd say it will be about a month and a half until they re-open. There are fewer and fewer people on the streets downtown and that's probably a reflection of there being fewer and fewer places to go into. The homeless are really taking it on the chin since the tourist population dropped from 'ample' to 'non-existent' in the space of two weeks there are few to none people to panhandle with. The line to get into the homeless resource center was long and quite rowdy when I passed by. It's gotta be tough. 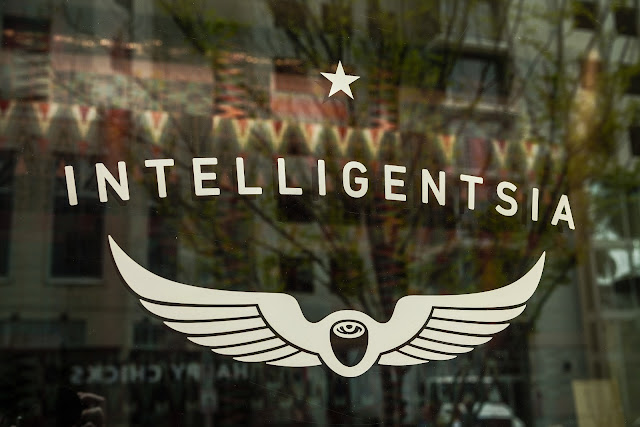 While some of the coffee shops are valiantly continuing by serving "to go" coffee a number of them have decided to just temporarily toss in the towel and close the doors for the time being. Some, like Intelligentsia are brand new and obviously couldn't have seen this coming. It has to suck to open a new business and then have to temporarily close it just a month or two later... 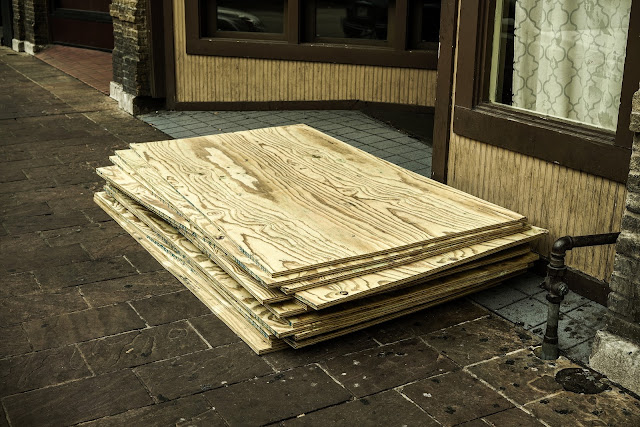 Stacks of one inch plywood are all over Sixth St.

If South by Southwest had occurred this year it would have been (as usual) a bonanza for the bars that line blocks and block of this old, historic, downtown street. But it didn't happen that way. Instead, the mayor, the governor and the federal health agencies decreed that there could be no gatherings of 10 or more people until further notice. Our city immediately required all the bars to close down.

A bit of background: Austin is home to the number one party school in the country: The University of Texas at Austin. While students have rooms in dorms and apartments surrounding UT they mostly live at the bar scene (kidding = hyperbole). We are basically shutting down hundreds and hundreds of bars and clubs per square mile. The bar owners know that this might go on for a while and have started boarding up the fronts of their establishments. I presume it's to mitigate vandalism, looting and trespassing. But it looks like a big chunk of downtown is preparing to weather a hurricane at the coast. 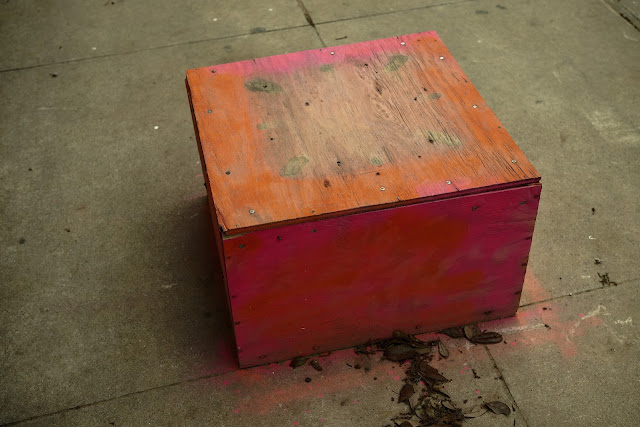 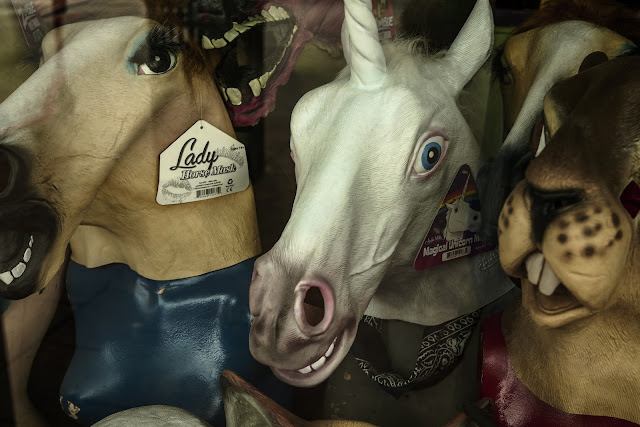 In times like these who doesn't want a unicorn?

The Sigma fp is a wonderful camera for this kind of walking documentation. It's small and light. The big sensor means detailed and mostly noise free photographs. The 45mm Sigma lens is the perfect complement to the camera body. I've been bringing along an extra battery on each walk but I've never had to use it. There's no wear-and-tear to your shoulder either. It's just a delight to use. And I've even gotten use to using the rear screen for composition and menu setting.  I mean, I really don't have any option otherwise, right? 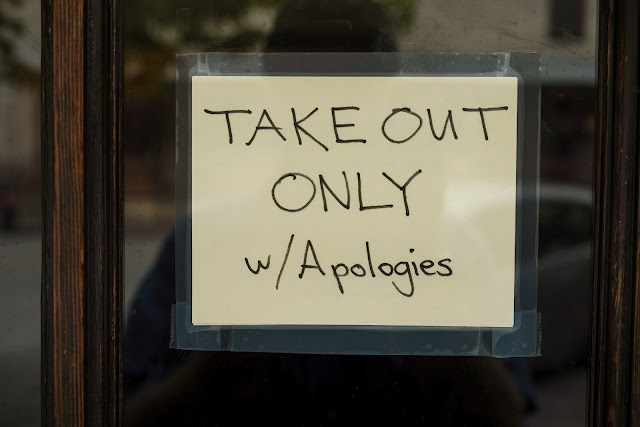 I never thought I'd see Chez Nous, a very nice and very traditional French restaurant
end up doing take out only. I hope it works and I hope it keeps the kitchen staff busy and
getting paychecks... 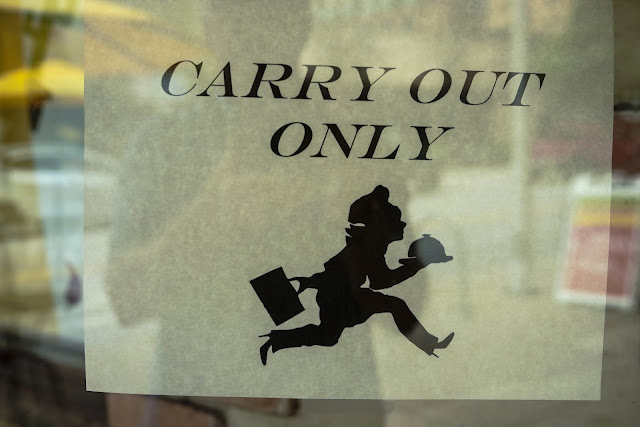 As I walked on I realized that life in Austin, at least downtown, orbits around drinking in bars and eating in restaurants. There really are no other attractions. Once the clientele moves out the space seems  empty and quiet. Traffic was a tiny fraction of what usually blocks up the downtown streets. Driving around Austin was actually a pleasure as there were no slow downs on the freeways and no gridlock in areas that are usually cloggy during business hours. 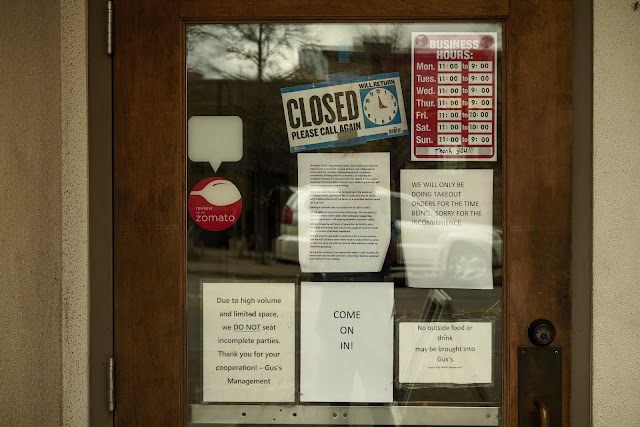 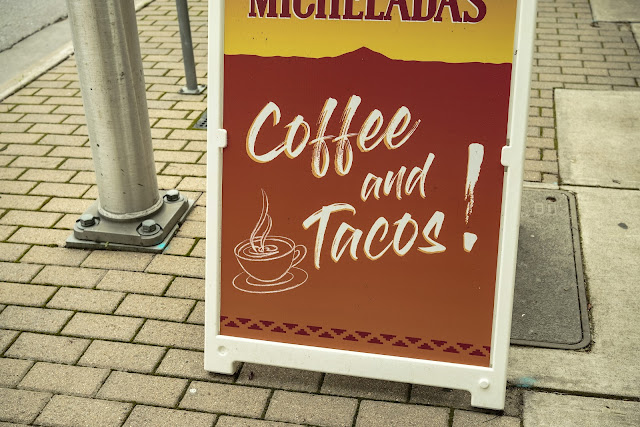 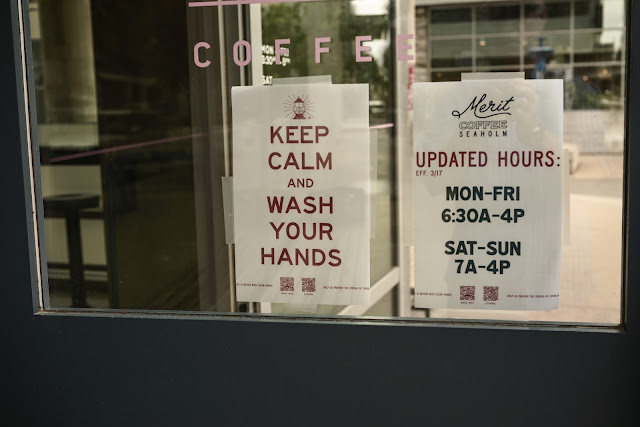 When you have a hammer everything looks like a nail.... Since I've always had fast 50mm lenses I've always tended to use them near wide open but with the 45mm Sigma, knowing it is at its best at f4.0 and smaller I've been shooting more and more stuff at f5.6 and f8.0 and loving the increased overall quality I get.

The reason I take cameras out and use them all the time is to practice the craft; to keep the eye hand thing in sync, to keep from feeling self-conscious when shooting. I liken it to being a piano player, you keep practicing to stay limber and comfortable with the keyboard. I think it's the same in photography. I read recently about someone who had hosted Josef Koudelka in their home for a couple of weeks. He walked around and shot three rolls per day. Stuff that had no relation to his typical subject matter. When his host asked him about this he replied that he needed to shoot about a hundred images a day just to stay in practice. I can only imagine what Garry Winograd would have said... 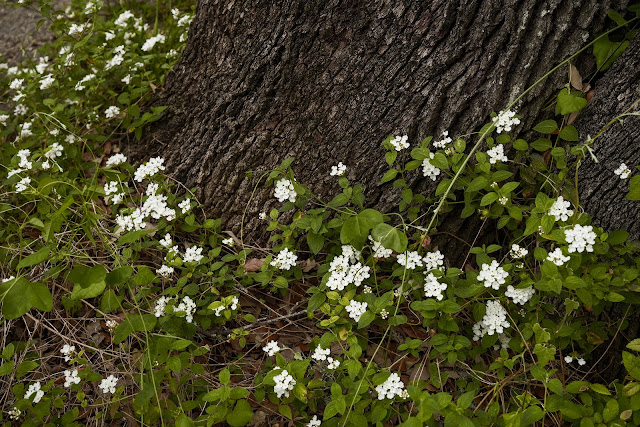 I look at this giant tree, wreathed with little white flowers every time I park my car at my house.
They are wonderful. I water them in the Summer. I couldn't bear for them not to be there... 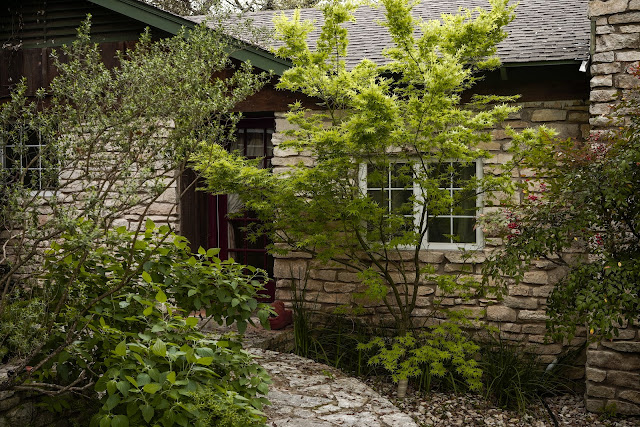 The tree in the center is a Japanese maple. Belinda is concerned that it will eventually
overwhelm our front door. I think that would be great. We'll learn to go around and use
the back door. 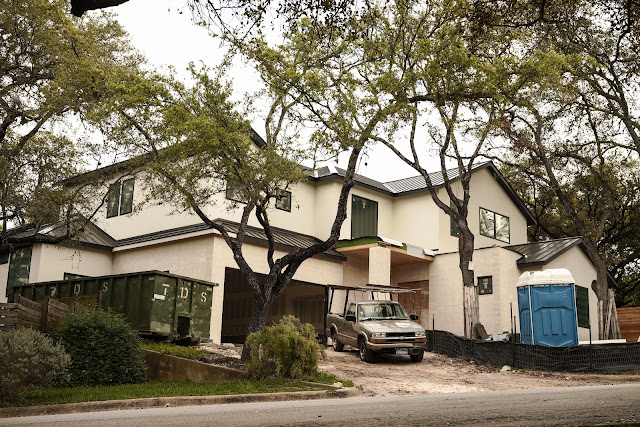 We live in one of those West Austin neighborhoods where people are buying older houses for a million dollars just to scrape the old houses off and build giant new houses to the lot lines.
This is the latest one and it's right across the street from us.
5000 square feet of progress.... Nothing we can do about it. 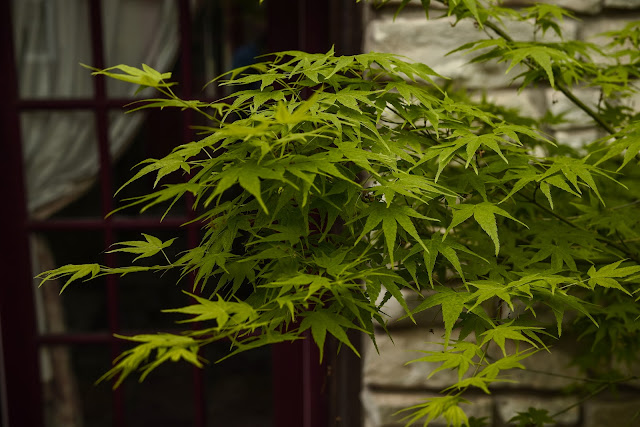 I see this branch of my Japanese maple every time I head into the house.
I love that it's thriving. 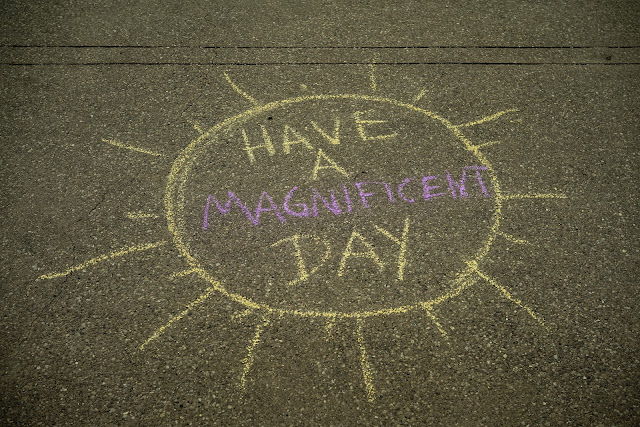 A young girl and her mother were out drawing with chalk on the pedestrian bridge today.
They were having fun. Their messages were sweet.

Social distancing doesn't have to be a prison sentence. Grab a camera and go for a walk in a wide open space. If you are in France or Spain then get a doctor's prescription for exercise. Just don't expect to stop at the café to have coffee with a friend and to argue about politiques.  Two meters between people and don't go if you are sick.