I had a job today. It was fun. It was supervised by two doctors. 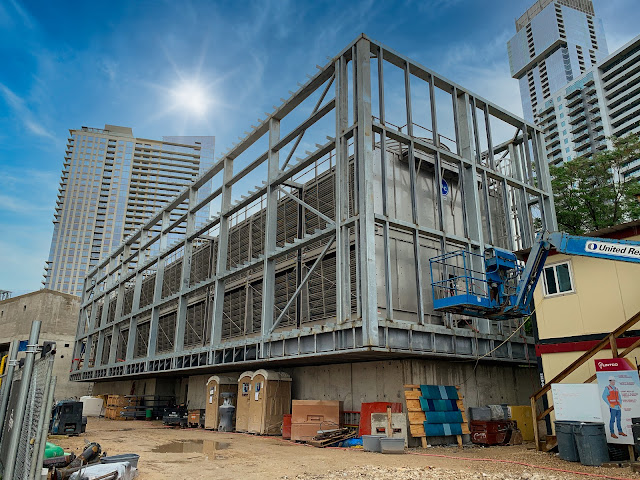 I think this is an enormous air conditioning tower. Someone is anticipating a level of global warming
that is gigantic. Still under construction...

Life continues to be interesting. One of the medical practices I've worked with for decades asked me to make a portrait of a new partner/associate. This is something we do a dozen or so times a year. The practice is growing quickly and they keep adding radiologists at a rapid clip. We do the portraits by appointment in my little West Austin studio but this was the first session I've done  since the virus crisis began here, a couple of weeks ago.

I asked for some guidance from several of my physician friends about sanitizing my space and putting protocols in place that would ensure that no on would come into contact with any virulent pathogens. No viruses. No weird bugs. I cleaned all the flat surfaces with Chlorox wipes, mopped floors with strong detergents and carefully wiped down the photo gear with isopropyl alcohol as per "Dr. Roger" at LensRentals.com.

I positioned hand sanitizer bottles at our entry way and even called my subject to see if she wanted me to wear a face mask (we are not hoarding masks, I had a small pack left over from an eye surgery shoot I wrote about last year...). Not necessary. We're actually into our 10th day of more or less total social distancing around here.

It felt odd not to shake hands when the two doctors (also husband and wife) came into the studio but that's our new normal. I had the studio lighting totally set up and measured via an accurate incident light meter. The camera was about eight feet from the posing stool I normally use for portraits and I used the 70-200mm f4.0 S Pro lens on an S1 camera to make the photographs. Only one of the doctors needed a portrait so we went through the process quickly but in no great hurry. They were surprised how soon the session was over and also asked to see a few of the shots on the rear screen of the camera. Success.

We all did a good job maintaining good distancing and after they left I made sure to wipe down any surfaces they may have touched. But --- they were pros and they know the no contamination drill a lot better than me. After my cleaning routine I sat down at my desk to edit out the blinks and grimaces, convert the raw files to really nice looking Jpegs, and put the images up on Smugmug.com in a private gallery. I continue to streamline the process with every session so it all just goes faster and faster. Soon it will seem completely transparent and instantaneously; I wonder how I will be able to justify my fees then....?

I shopped today. Groceries only. It would seem wrong to bop up to Precision Camera just for a quick look around; especially since there is nothing photographic I really need to buy right now.

My first leg was to Whole Foods. I wanted to buy a really good steak. A better one than I could get at the other local chains. Belinda also asked me to check and see if they had milk. I was expecting the experience at the store to be time consuming and would require waiting in a long line to get in. I thought they'd be limiting store traffic in that way. But no. There was ample surface parking and the store wasn't at all crowded at 2:30 pm when I walked in. People were shopping but there was no sign of frantic panic and no carts overflowing with milk cartons or cleaning products.

The only aisle that was picked over and naked was the one for toilet paper and paper towels. And, of course, there was no hand sanitizer to be found. But the meat counter was well and fully staffed and the inventory of prime cuts was as burgeoning as ever. The same story in the cold cases, for milk. I bought two half gallon jugs of organic whole milk ($3.99 each) and moved on to vegetables.

Today organic asparagus was on sale for Prime Members for $2.99 per ample bunch. I bought some but when I got home Belinda reminded me that Ben isn't a big asparagus fan and the reason for the shopping trip was to stock up for our weekly family dinner with the kid. That's okay --- I think I have some Brussel sprouts hoarded away for just such an emergency.

My next stop was the neighborhood Trader Joe's store. There was a line there... but it had about 12 people in it and moved rapidly. I was inside and shopping in about three minutes. I bought a bottle of red wine and two small, spray bottles of hand sanitizer. In and out in five minutes or less. 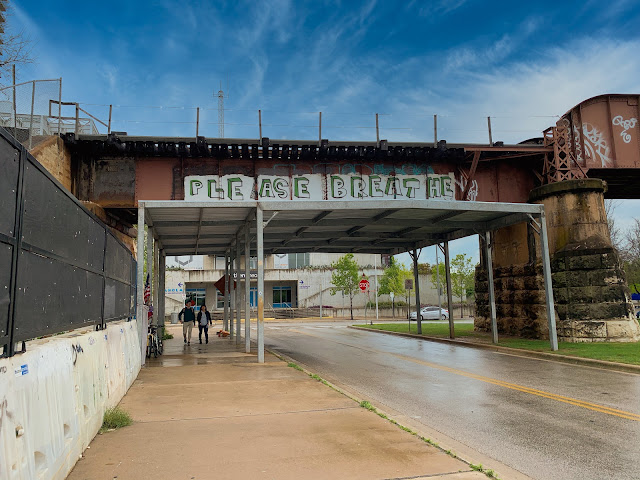 Embracing the iPhone. I went for a walk in downtown yesterday. It's still totally legal here as long as you keep to yourself. The complication was a steady rain. I know that all the cameras I've bought in the last year are supposed to be weather proof or weather resistant but I still have a perhaps unreasonable fear of walking around with a soaking $3600 camera body attached to a $2200 water covered lens. And the last time I went out walking nobody seemed to like the photos I came back with anyway.

"The Hell with it!" I said to myself, I stuck my iPhone XR in the pocket of my rain jacket, tossed the Sigma fp onto the floor board of the car, covered it with an old, black baseball cap and went off to look for my little corner of America.

I've come to like shooting with my iPhone now. I fixed the stuff I didn't like about it. It was awkward to hold but I bought a Manfrotto phone holder that allows one to attach the phone to a tripod or other quarter inch mount tool. I chose a Leica table top tripod bullhead as a grip for the phone and its attaching mechanism. Now I like the way I can old the phone and steady it in my hands. The grip is nice but I still, out of habit, stabilized with my other hand on the right edge of the phone.

The most compelling feature of the phone is the slo-motion video. You can do 240 fps or 120 fps. That's 4X slow mo from the 120, if you are basing it on a 30 fps finished file. But here's the weird thing! It looks really, really good. I was just playing around with it but it's fun to point the camera at your feet and shoot as you walk. It looks hilarious when your motion is slowed down by a factor of four. Really fun.

I've also found that a really steady grip when shooting iPhone stills is paramount to getting really nice files. So I think I've mastered those parts too. Shooting with the XR is so different than shooting with a conventional camera in that every shot is wide and every shot has pretty much everything in sharp focus. It's something you have to get used to after spending months shooting everything with a full frame camera and mostly fast, traditional lenses. Amplify that when you take into consideration that I mostly shoot with 45mm and longer lenses...

The final thing I've learned is that Airdropping images between the phone and the desktop computer kills some of the image quality of the photos. I think Airdrop must do some compression to the files... I tend to hook the phone up to a USB cable and do a manual download. Done that way the files look great. All the files in today's blog were done with my phone. I thought I'd give my brain a break from the Sigma fp camera; even though it's as close to perfect as almost any camera can be. Well, at least for snapshot-y things and art-sy things. 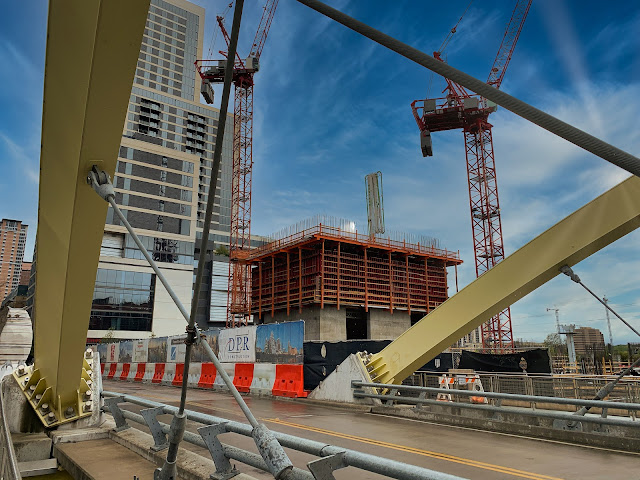 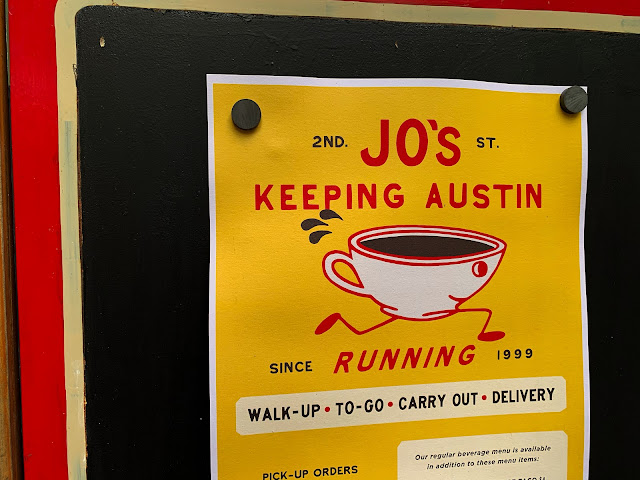 The walk itself was a bit depressing. There's no one on the streets except the homeless. They seem especially lost these days since their primary source of income = other people = have almost completely dried up. Downtown is empty. Everything is closed. The hotels looked almost forlorn. One or two shops, like Jo's, were trying the "carry out" only thing but they seem to have thrown in the towel for now two as there was no one there and the lights were off at 3 p.m.

When the number of people on the streets drops below a certain count the magic of the street vanishes completely. The added insult is the boarding up of all the store fronts of the bars and restaurants in the downtown district. You can't even enjoy some of the historic buildings' interesting facades and shop fronts.

I think I'll give up on photographing the downtown area until the people are able to come back. It's too sad. Too depressing. Nothing like this has happened in Austin since I got here in 1974. It's like someone just suddenly sucked the life out of a city. The only salve is my belief that we're just in a state of social suspended animation and that soon the bars, theaters and restaurants will be back and thriving. At least I hope that happens. It was be sad if this was it. The end. The downfall of civilization. 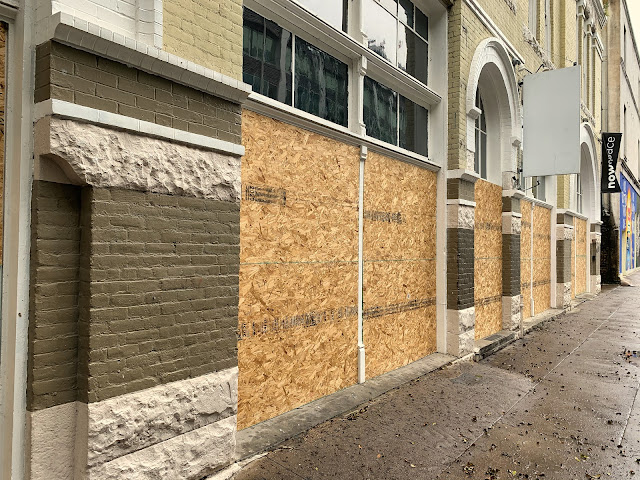 Boarding up an historical district. A safety precaution against looting and squatting?

The one bright side is hearing about big companies stepping up during the pandemic. Target just increased worker salaries by  at least $2 per hour. So did Whole Foods. Starbucks closed all but their drive up locations but announced that every worker would be fully paid through the next 30 days (at least) and would keep getting health care benefits, including mental health support. Even if they chose not to come in during those 30 days.

Several CEOs are bargaining for federal loans and offering to forgo their pay for the year.

With the walks downtown gone, the theater gone, swimming anywhere cancelled, and all the coffee shops gone my universe seems to be getting smaller and smaller. Bleaker and bleaker. But I guess it feels that way for a lot of people.

And since we're all watching our budgets; either for our own survival or to have enough to donate wisely, while still meeting our obligations, the one thing I've stopped buying is photography gear. Really, what's the point of buying ever newer toys if all the things and places you wanted to photographed are now off limits?

When (if?) everything comes roaring back I'm throwing caution to the wind and embracing travel and adventure to the max. Time all of a sudden seems so short and there's so much left to see and do.

The house feels big and empty without Studio Dog. Maybe it's time to try something completely different. But I couldn't plan a worst time to launch something new. Right?  Right?

As my wealth managers says, "Stay the course and keep with the game plan. You'll come through this (the crisis) unscathed." Maybe so but it's not quite what I had planned for...

Posted by Kirk, Photographer/Writer at 21:17 19 comments: