A mini re-review of a mini camera. April 16th. In the car, getting ready to go walking in the appropriately designated area.

It's been interesting reconciling the need for exercise with the desire to carry a camera with me to make random photographs for pleasure. I used to swim every day. Who knows when or if that will ever come back. But I never took a camera into the pool. That was a "walking" thing. So, now I walk. Three days a week I also run, but everyday I walk. At the beginning of the crisis I walked through downtown because we were allowed to and that was where I was used to taking photographs. But now downtown is more or less closed down for all but the most essential enterprises, and the homeless.

Group thought momentum has made walking anywhere without appearing hell bent on just exercising is infectious. I can feel the judgement from a hundred yards away. And I feel sorry for all the people living downtown in the high-rises who will be judged for merely leaving home to walk to a grocery store for food. They'll have their heads down, and the kindness and courtesy that Austin has always been famous for will die a bit more.

In the past I felt comfortable carrying any camera I was interesting in at the moment along with me when I walked around the Lake on the Hike and Bike trail. I hardly pulled a camera off my shoulder and shot anything with it but it seemed natural and sanctioned to have on at hand. At worst it was a clear sign that there was a "boomer" under the strap, as we seem to be the only ones left who still carry a single purpose camera with them everywhere.

Now relegated to the trails, and working under the current assumption that the trail is only open for the exercising of exercise, I've started to feel more and more self-conscious for bringing along a full size camera. I've downsized from any camera to something the size of the Sigma fp (small) but still wasn't feeling it so I downsized to the Panasonic GX85 and even that felt obtrusive. Unwelcome.

Today I woke up and looked outside. It was beautiful. Spring is in full bloom, the temperatures were mild and close to perfect, and the skies were that good old fashion, horizon one hundred miles away  Texas blue. I wanted to take a long, brisk walk but couldn't bear not to take a camera along so I looked in the equipment tool case trying to find the perfectly sorted, briskly walking man takes along camera as casual afterthought camera.

I think I found it. It's the Canon G10 Powershot that I bought from a friend about a year ago. This is my mini-review of that camera.

I've owned a couple of the G10 cameras and keep rediscovering just how good this small, dense, point-and-shoot camera is. 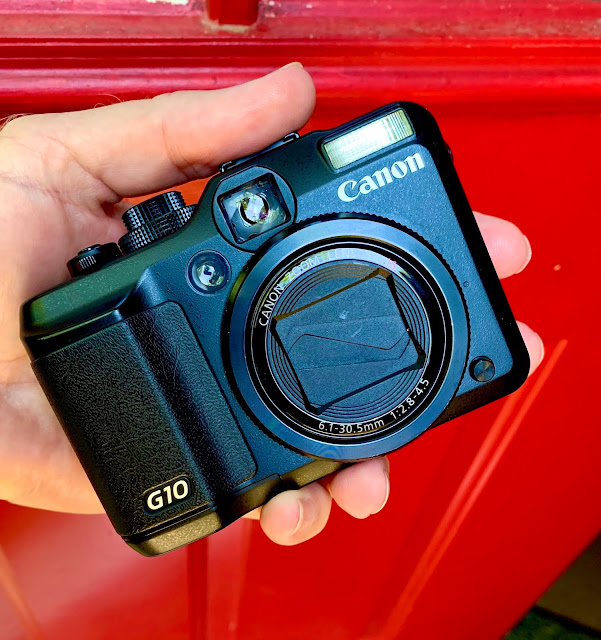 The whole G series of Powershot cameras from Canon were really superb small cameras. This particular camera was launched in 2008 and was initially criticized by the all-knowing photo press for having too denser packed (and therefore too noisy) a sensor. I agree that it isn't the best high ISO camera ever produced but it had/has such a rich feature set, and it created such great images, that it could not be ignored.

The camera featured a 14.7 megapixel 1/1.7 inch CCD imaging sensor. It was, I think, the last of the CCD sensor cameras from Canon and I think it was that older technology that gives it such a good and uniquely photographic image . The lens was a 28-140mm f2.8 to 4.5 zoom and, again, the gear critics at the time were also not at all happy to have a lens that slowed down so much at the long end. Now they just take it in stride.

I bought the camera just before starting a new book project for Amherst Media Publishing in 2008 and I used the camera, on a tripod, and at its lowest ISO (80), for every single product shot in the book. Just like my Kodak CCD-enabled professional cameras, the DCS 760C, if you used it in the best part of a narrow window of parameters you could expect very, very good results. The combination of a sharp lens, a very detailed sensor and a stout tripod yielded files for me that were very satisfactory for publishing images at up to a full page in a printed, four color book.

The G10 was/is a wonderful camera for seasoned photographers to use in good lighting. It provides a Canon raw file and can be set up to shoot a Raw+Jpeg file as well. The camera has complete manual controls and plenty of dedicated knobs and dials so one doesn't have to jump down into the relatively clean menus to make small changes to things like exposure compensation or ISO. The ISO dial surrounds the mode dial on one side of the camera while the dedicated exposure compensation dial sits on the other side. Right in the middle is a hot shoe that allows the use of Canon dedicated, TTL flashes but can also be used with generic flashes that have a single contact.

One result of having a camera with a conventional hotshoe and an electronic leaf shutter (as opposed to a focal plane shutter) is that the camera can sync at very high speeds. I used to use it at swim meets in the Summer at shutter speeds up to 1/1000th of a second with very good results. The shutter actually goes all the way up to 1/4,000th of a second.

The camera was, at the time, one of the first to offer decent face detection autofocus and it also has very good image stabilization. I find I can generally shoot at any focal length at a shutter speed down to at least 1/15th with very sharp results. The one parameter that won't get it much praise was its video capabilities; it only shot 640 by 480 or worse. But, it was a different time....

The little, chunky batteries are good for about 400 images with the LCD on and up to 1000 image if you turn the screen off and learn to trust the evaluative meter in the camera. But to shoot in this mode means you have to frame your shots in the optical finder and that's the one other (besides movie mode) crippled feature of the camera; the optical finder is "blessed" with both massive geometric distortion and a lower magnification. It's also showing only 80 to 85% of the final image. The OVF was not the G10's best feature....

Like all contrast detect AF systems the Canon takes a second to lock onto whatever you've put under the AF indicator square. I'm sure you could try the C-AF settings but I'm equally sure you would be frustrated in most situations. This camera (and most like it) was made for taking travel shots, quick portraits, and other types of photographs that showcased mostly non-moving subjects.

There are two G series Powershot cameras that I really, really like and kind of own. The first is this one. The G10. To make an analogy with another camera system I own, the G10 is the high res version of the family in the same way that the S1R, with its 47 megapixels is the high res Lumix camera. In the Canon G series the camera with better ISO performance is the G15. The designers throttled back the pixel count from 14.7 to 12 and implemented a new CMOS imaging sensor that handled higher ISOs with more grace than any of its predecessors. The G15 was the Lumix S1 of the Canon G series family.

I say I "kind of own" the G15 because, in reality, I lent it to Belinda for a vacation trip and never got it back. She really, really likes that camera. It's small, fast to use, has a faster lens and takes better images under low light. For someone who has no desire to play with accessories or to change lenses the G15 may be one of the great travel cameras that you can buy (used) for less than $200.

So, I took the G10 with me this morning because I could "palm" it and carry it in my hand without a strap. Its smaller profile probably looked more like just a chunky cellphone at a quick glance. Funny that it's commonplace for nearly everyone to hike or run with their cellphone clutched like pure oxygen in their clenched hands but at the same time to begrudge people for carrying conventional cameras.....

I've made peace with cameras that mostly depend on the rear screen for everything. Maybe my bifocal prescription is just better. But I'm able to make photos in stark daylight using the rear screen and that's pretty cool for a camera screen that's twelve years old.

This morning I shot raw and then post processed in Luminar 4.2. It does a very nice job converting these old raw files and I find a lot of the hokey presets in the program are fun and...endearing in their kitsch-y aesthetic. So Eggleston. When I got back home I was happy to see that I'd gotten about 20 images that I really wanted to play with and look at. Nice. See images just below. Some even have captions.... 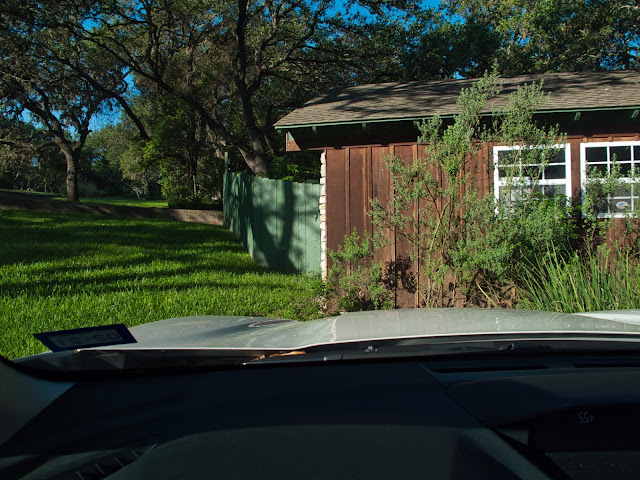 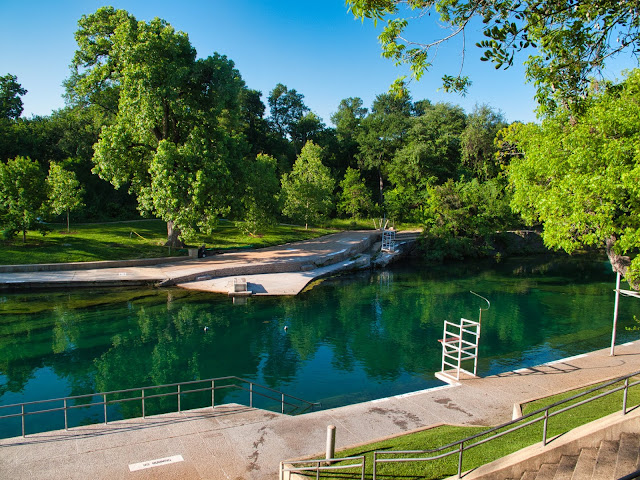 Barton Springs. Totally empty. No swimming allowed.
And I'm too egalitarian to even try bribing someone for access... 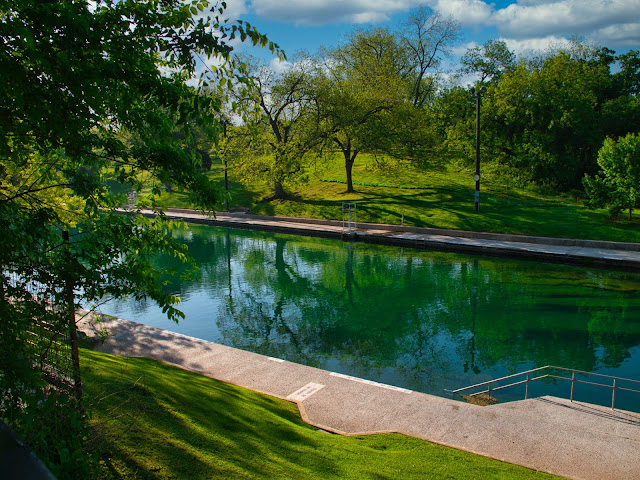 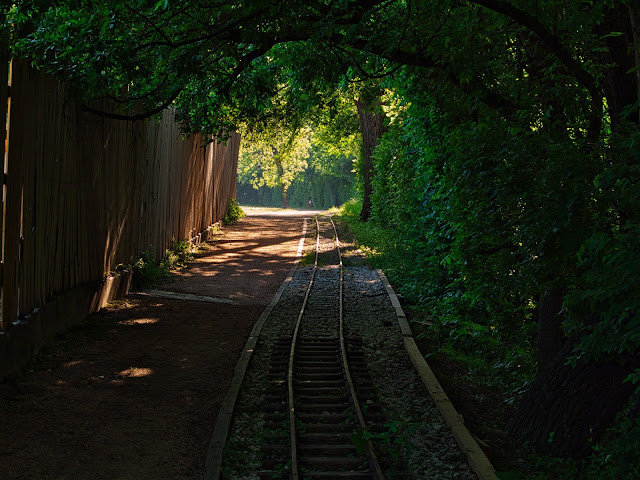 Don't worry. The little train that runs through the park is also shut down.
These are not Union Pacific Railroad tracks. I was not in mortal danger at any time.
But I took the photo to show off my skills at social distancing. 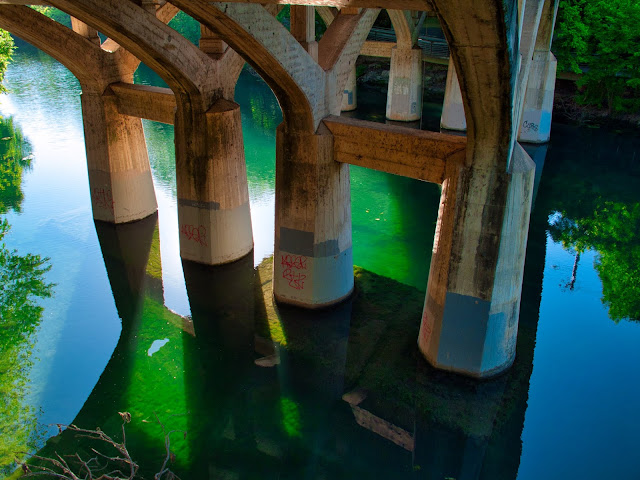 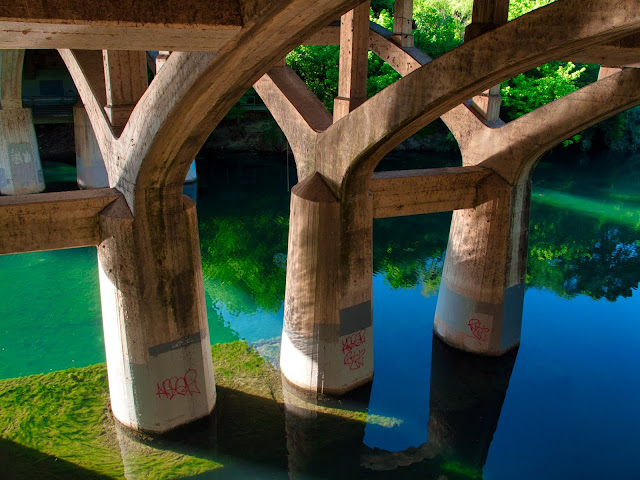 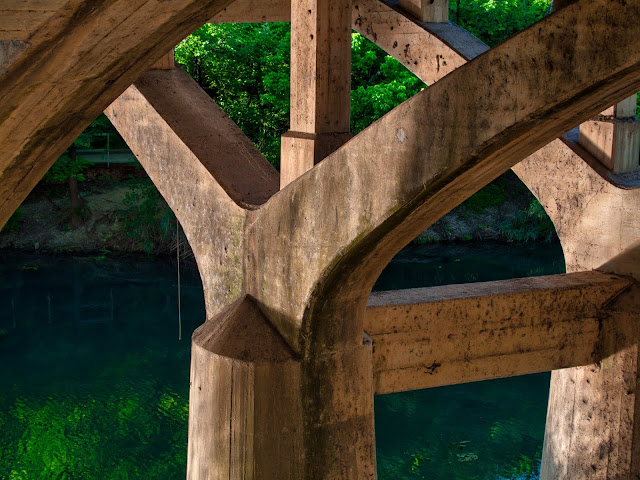 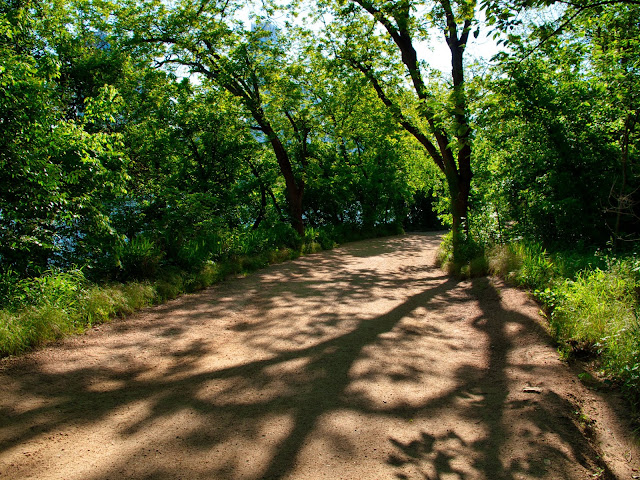 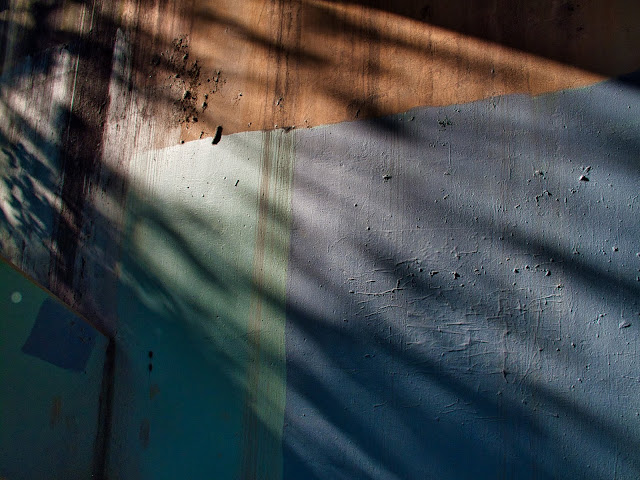 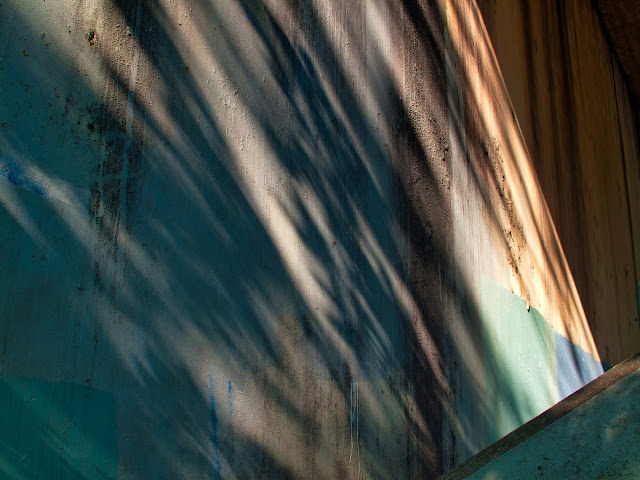 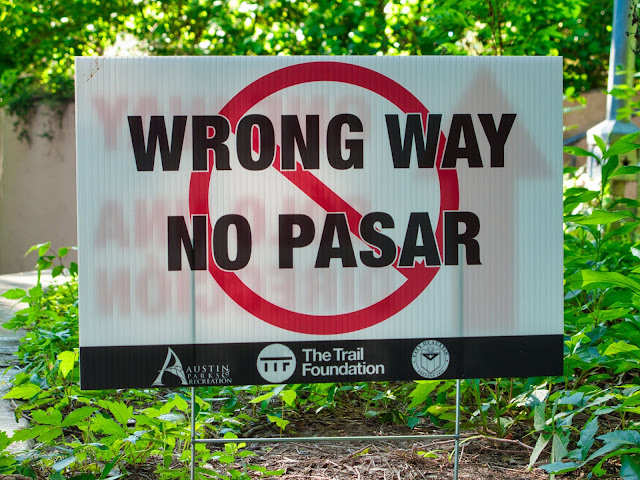 New for today!!! The powers that be have decided (and I agree) that the trail should
have all traffic going in the same direction; especially since the trails are laid out in interlocking circles. Now we all go clockwise around the trail. This will alleviate (somewhat) people blocking
the entire trail and breathing towards the oncoming people traffic.

And yes, I read the European study saying we need more distance if we are running behind someone... 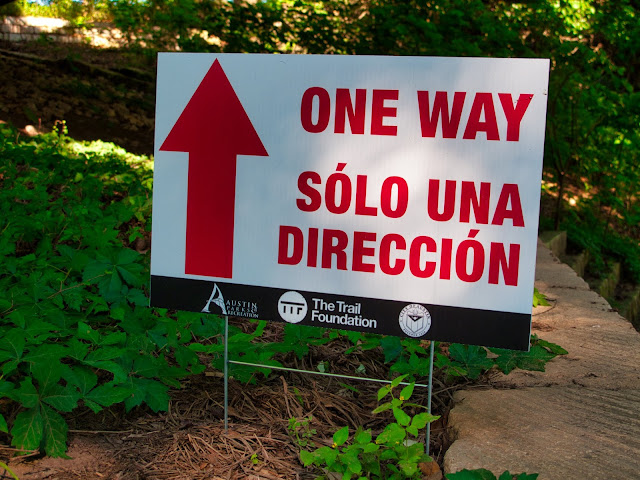 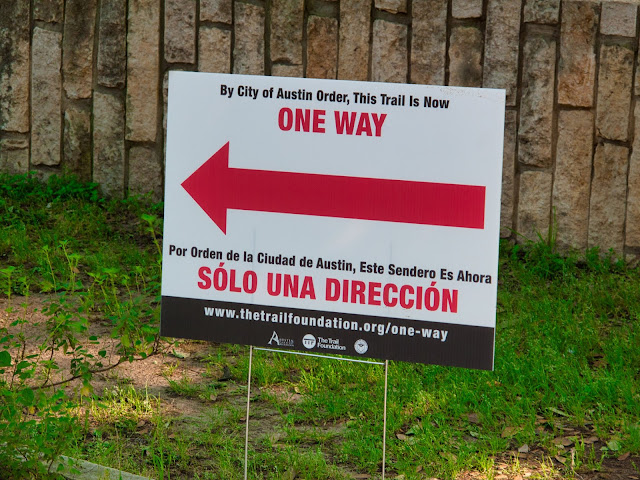 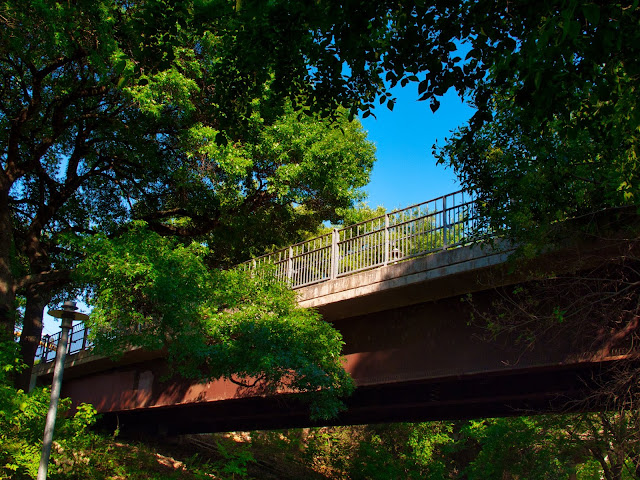 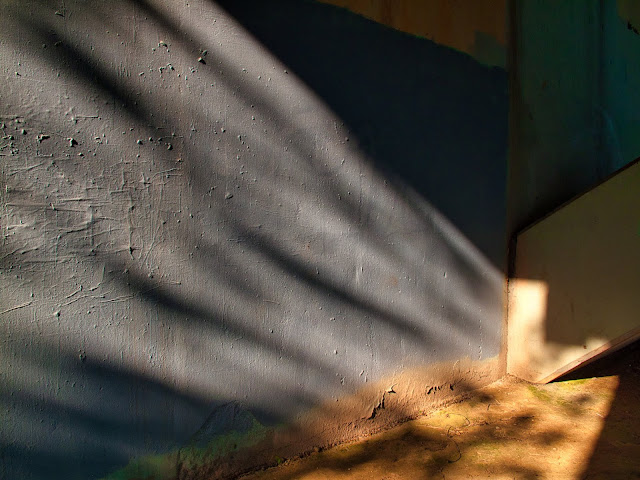 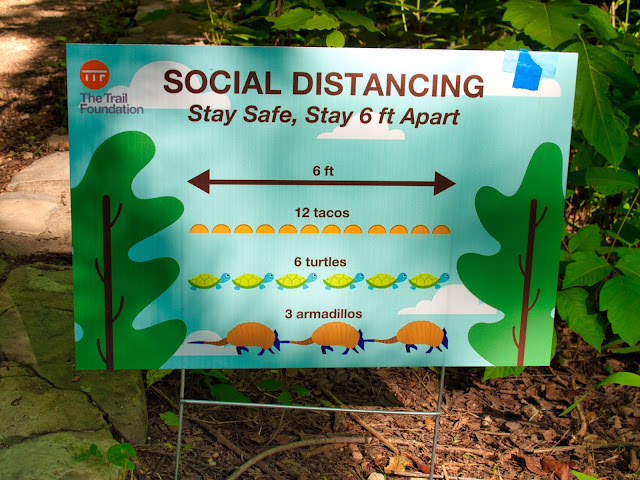 Loving the creative examples of distancing. Nice. Fun.
It's okay to have fun in times of crisis. Gets the message across better. 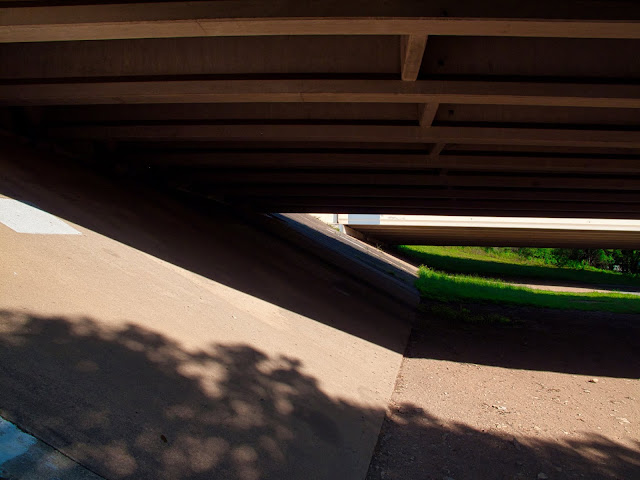 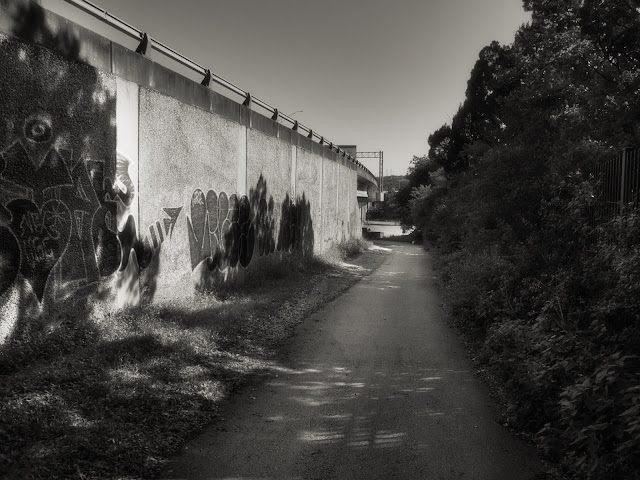 Canon G10's monochrome is first rate. At least I think so. And lots of detail! 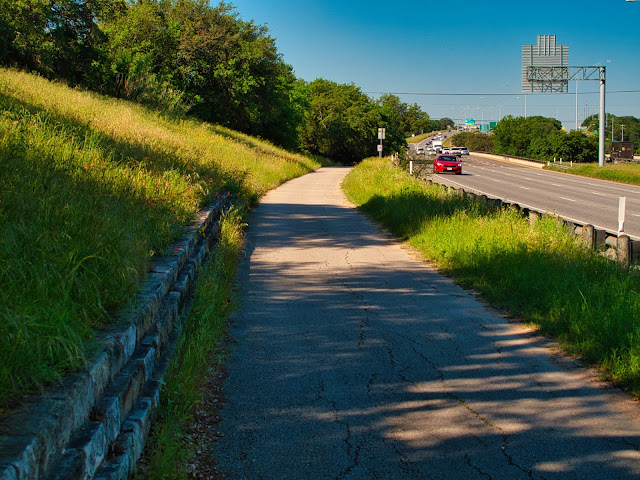 No conflict with safety on this little used part of a branch trail... 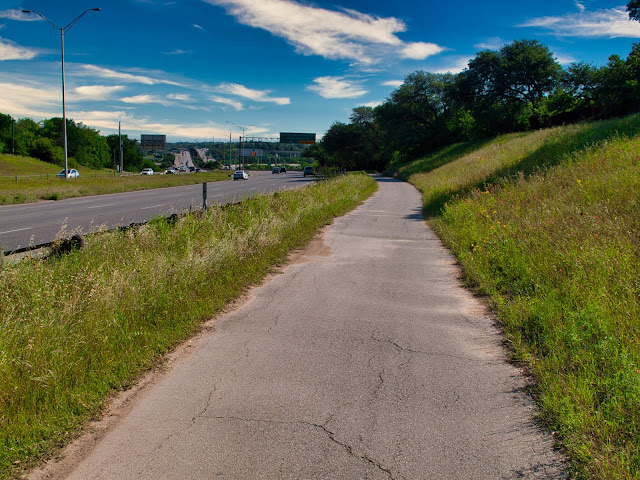 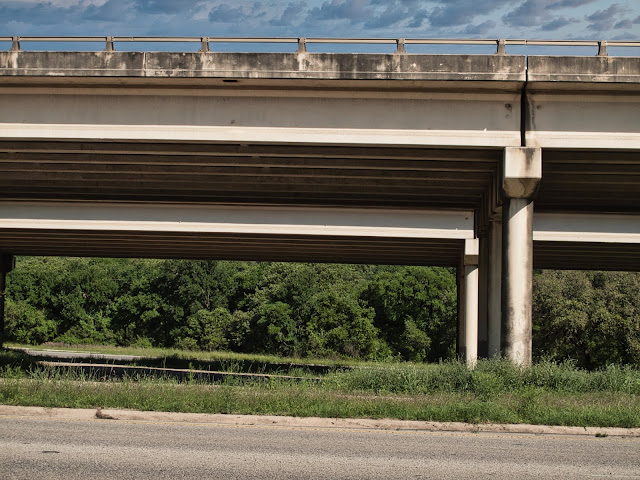 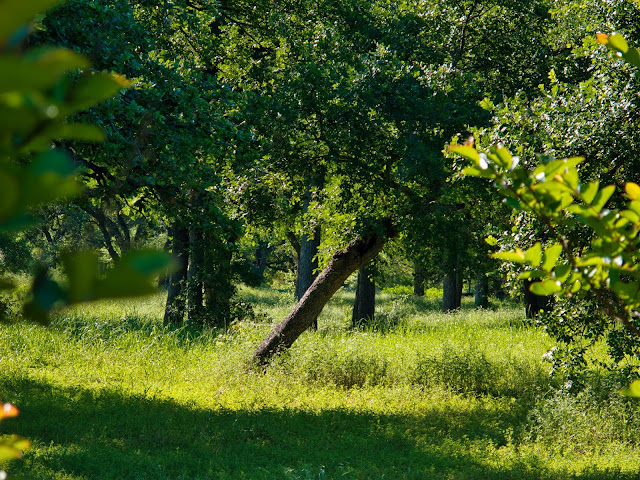 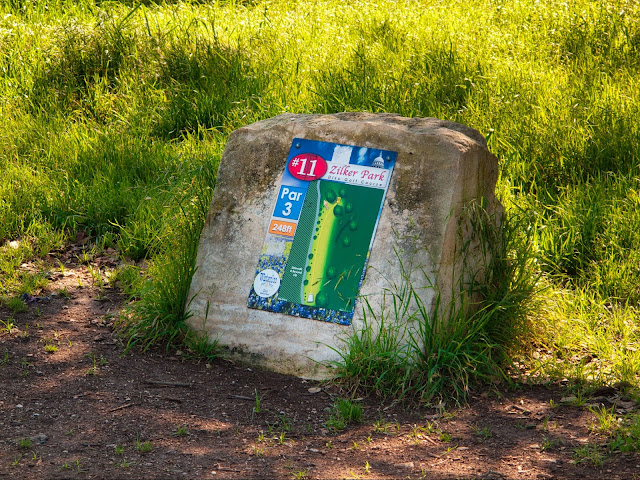 Maybe I'll take up disc golf. Like I need a new hobby....

So far Austin and Travis County have done a better than average job of keeping infections down. We are no where near seeing a trend toward exponential contagion. The number of cases per day seems to be flat for now. Hoping all of our mask wearing and social distancing is paying off. Helps to have an educated population that pays attention and is generally able to work together for the common good. Makes me proud to live here.

Posted by Kirk, Photographer/Writer at 15:14 12 comments: