Why my resurgent interest in the lowly Panasonic FZ2500? Interesting that you should ask... 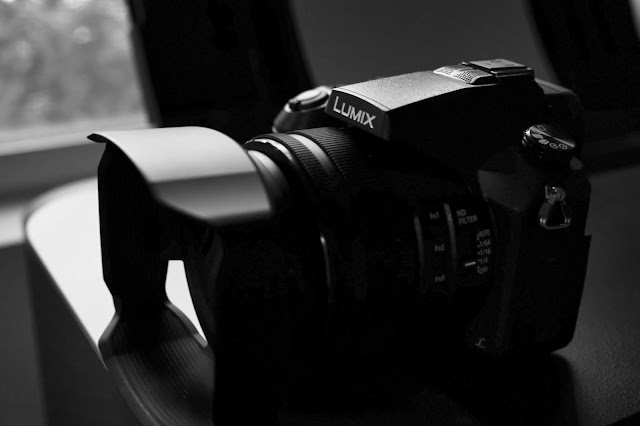 I have an embarrassment of riches when it comes to video capable cameras with which to shoot; or so it would seem. There are two Panasonic S1's in easy reach. Each has been upgraded with the magic firmware that yields in-camera 10 bit, 4:2:2 capture and V-Log. On the desk in front of me is the Sigma fp which is capable of shooting raw video as well as a long list of high data rate, .Mov files in every configuration you might want. There are Sigma Art lenses and Lumix S Pro lenses littering every flat surface in the studio as well. So why would I want to buy another copy of a camera I owned three years ago, made mainly of plastic, and readily available, used, for around $500?

There is actually a very straightforward answer. It lies in the fact that all the cameras I mentioned previous to the FZ2500 are made to work as cinema cameras. Tools that are engineered to give the very best image quality possible and yet they require a lot of "add-ons" to make them more functional for ENG work (ENG= electronic news gathering, or, stated another way = documentary work without a crew).

If I want to shoot on the fly interviews on the streets in downtown with, say, a Lumix S1 I'll need to add an assortment of neutral density filters to put on the front of the lens. And I may need several different lenses depending on the subject matter I'm going after. The larger sensor in that camera means I'll need to be extra careful to make sure I've nailed focus because the depth of field can be quite small. And, even though that camera has very good image stabilization it's not in the same class as the FZ2500 because the smaller sensor camera has....a smaller and more controllable sensor. Bring a tripod or a monopod. And then bring a permit....

The Sigma might be an even higher image quality machine but to use it I'll need to carefully manually focus, I'll need an outboard SSD drive to keep up with the data rate of the raw files and, since the camera has neither image stabilization nor neutral density filters built in, we'll have to bring a big tripod and more filters.

If I want to go out as bare-naked, equipment-wise, as possible I want something that works like a good, old fashioned camcorder. That means I want a package that can be handled in the street by one person. It needs to have a wide ranging zoom lens. It should shoot very, very high quality 1080p in an All-Intra codec, as well as offering full UHD and even Cinema 4K. I'll need peaking and zebras. I want clean microphone inputs, and I very much want the camera to have flexible, built-in neutral density filters. Add to all that good face detect AF and a long run time and you've put together a street ready video camera that can handle a very wide range of subjects. All for (used) around $500.

Want to use it with a clean output to send less compressed video to an external video recorder/monitor, like an Atomos? No problem. The camera will output up to 4K in 10 bit 4:2:2. Want to shoot an interview in front of a computer monitor or in a situation lit by flickering light sources. Yeah. It's got variable frame rates galore.

The real question, if you often want to shoot seat of the pants video, on the fly, is....why would you not want to pick up one at a bargain basement price?

Does this mean I'll abandon the above mentioned, full frame cameras? Heavens no! The files out of them look so great and the ability to use a wide range of fast, best in the market lenses gives me so much more image control. The audio adapter for the S1 cameras sounds great. The full frame image is a  whole different aesthetic. The 85mm f1.4, wide open, is magic on the S1 and the Sigma fp. But they work both best on a tripod or slider or jib. They work best when you can take your time and set them optimally, manually and repeatably.

No, the FZ2500 is for all the other times. The handheld stuff. The "Quick! Can you capture that?" And for those situations when nothing will beat being able to reach in with a 450mm lens and get the shot.

I mean, since you were asking.

Kudos to M.J. today. I never thought anyone could use over a thousand words to say, "Eat your broccoli. it's good for you." And I never imagined that, if someone did write that much to say so little, that I would have read every word. I wouldn't enlist him as my nutritionist but Man, can that guy write!!!
Posted by Kirk, Photographer/Writer at 19:35 15 comments:

Cleaned up the studio and put on a freshly laundered shirt so I could do a FaceTime conference with a law firm. 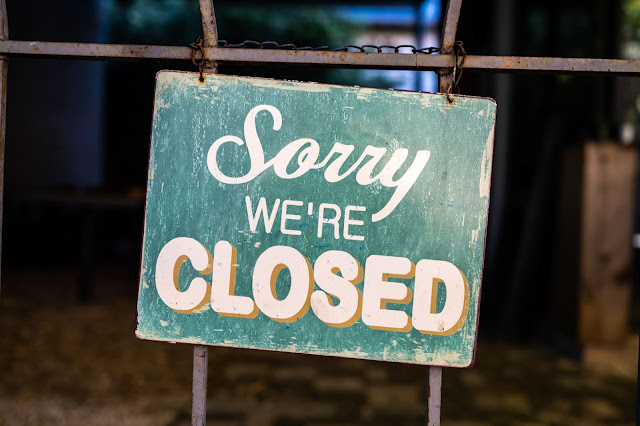 This particular post is aimed at freelance photographers and videographers.
I think it has some universal applications for business owners of all stripes.

I came in from a "hilly" run covered with sweat and breathing hard. Took a shower and put on a pressed, dress shirt (and pants) and sat down in front of my computer to have a FaceTime conference call with one of my clients at a law firm. Seems all their competitors have been doing videos for the web, and television commercials, and the competing firms are getting better name recognition and more market share. I guess, since law firms are considered essential businesses, that the clock doesn't stop. Potential work is out there, in quantity, but we creative folks have to wait for the all clear signal to be sounded for those of us in non-essential enterprises to get back to work. Sounds kind of pejorative to be called, non-essential.

But what this morning's small event tells me is that there is demand. Cash flow might suck for us in the short run but in the medium and longer run there is demand for the kinds of work we do. Our products are one of the many cogs in the figurative machine of commerce and while the machine may run for a little while with some parts missing it will eventually break down; or at least underperform, until those missing parts are replaced or repaired. The down side is that the recovery might take more time than anyone who runs a business like ours would like.

I know that a lot of freelancers see this whole downturn as something over which they have no control and no way to take action but that's hardly true. If we had 50 good, recurring clients before the shit hit the fan we'll probably still have 36-38 good clients left when the vaccine comes around or a fool proof treatment drug is mass produced. I'm assuming a business failure rate among existing clients at around 25% which seems to me to be just about right for bigger corporations in dire times. If you were specializing in restaurant or event work your numbers will look worse. But here's the deal: those 37.5 clients still working when the lights click back on are yours to lose right now.

It's a good idea to stay in touch. To remind the clients of the relationship you both enjoyed and both profited from. You can stay in touch by sharing some personal work, by writing an essay on something relevant to both your industries and sharing it on LinkedIn. By sending e-mails outlining how you'll handle personal safety when we all get back to work. Talk about your continuing education in your field and how it will benefit your clients. The important thing is to use your time wisely to stay in touch with people who've proven in the past that they can and will write you checks instead of considering this a time to binge watch Tiger King on Netflix.

Now is a great time to experiment with video if it's a service you aren't already offering. Set up the gear, play with audio. Watch a video by Curtis Judd on recording better audio for location videos. Watch Sean Tucker talk about the way he edits Youtube programming. But more important, try each thing you learn from videos on Youtube with your own hands and your own gear. It moves your education from theoretical to actual and informs you about where your current skills are sub-optimal and can improve. Then it's back to learn > try > and master, again.

The end result of our call today was a request for me to do some creative concepting around their unique selling propositions. What they do better. How they produce better results. Why working with them makes sense. I'll go back with some broad concepts (which I will bill for) and we'll try to align those concepts with their firm's brand and identity. Once we have some good fits I'll sit here in the safety of my office and write scripts for both web programming and television commercials. We'll have another call to approve or change scripts and then I'll generate storyboards and find a motion graphics pro to produce an introductory logo treatment to put at the front end of every video. All of this is background work that's important, and billable, and can be done remotely.

The lawyers won't like it but I'll have to let them know that we can't shoot actual, principal video until we get the go-ahead to go back to work from the local health authorities, and even then we'll have to conference about how to ensure everyone's safety on set. (I can tell you one thing, this will benefit solo video artists a great deal as being a crew of one definitely reduces the staff footprint as low as it can go!).  We'll limit the number of people from the client side to just two on set at a time: one on camera and the other from marketing for content approval. When people are not on camera we'll enforce a "face mask on set" rule.  It might slow production down a bit but that's okay if it means we can go back to work and stay safe.

A fringe benefit to maintaining good, personal relationships with clients? All bills for work done this year have been paid by my clients on time. Some a bit earlier than usual. Keep your powder dry and be smart about focusing on the future. Don't waste time. 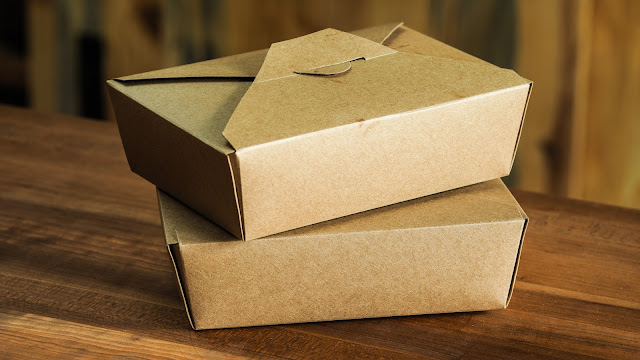 Ah. Take out. Now a significant treat in our house.
But only once or twice a month...we're cheap.
Posted by Kirk, Photographer/Writer at 12:22 4 comments: