A warm but refreshing walk through a mostly deserted downtown Austin. A quiet and solitary celebration of the 4th. 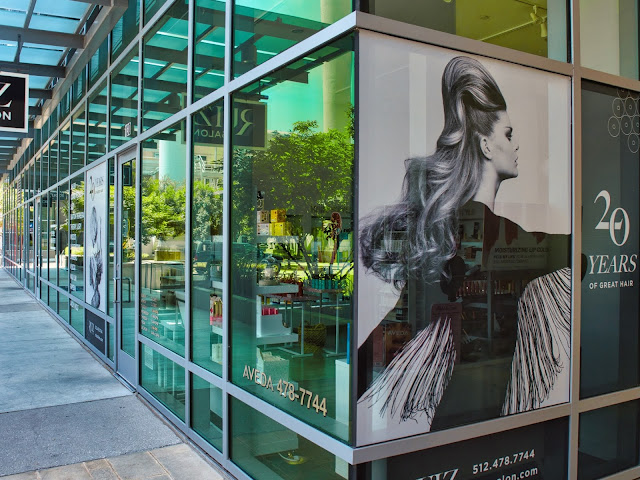 It hit 100° Fahrenheit today in Austin. When we factored in the humidity it felt more like 107° so it was a sweaty afternoon for a casual stroll. But what are you going to do? On the positive side, at least during the pandemic, I find that oppressive heat and humidity makes for radically good social distancing since few people want to leave their air conditioning to amble through an area that's currently shuttered.

But I love being outside walking; especially if I have a fun camera and a new lens with which to play.

Today's combination was the Lumix GX8 and the Sigma 16mm f1.4 Contemporary lens. A very nice street shooting combination --- now that I'm learning to leverage the wider focal length. My one nod to nerd-dom was the addition, on the lens, of a circular polarizer, of questionable quality. I say that it's of questionable quality because every frame I took showed the same low contrast when I got back to the studio and started playing around in post. The images looked pretty good when reviewed on the EVF but much, much flatter on the iMacPro. I would guess that several things are at play here. One is that the filter is an off brand called a "Niko". Second is that the Niko polarizer in question is at least 20 years old. And finally, I think importing raw files directly into Luminar 4.0 gives a different look than importing the same files into Adobe. Almost as if the developers intentionally go for a flatter profile when importing raw files in order to show a greater contrast between the "before" and the "after" when using their "looks." No proof, just conjecture on my part.

For work I keep using a combination of Abobe Lightroom (classic) and Photoshop. They're ultimately predictable and give me a lot of repeatable control over imaging changes. But for my "fun" photographs I really like playing around with programs like Snapseed and Luminar because they can make my stuff look different in ways I hadn't through about or experimented with. Seeing work in a new way might lead to incorporating some of the pizzazz while rejecting other more kitschy parts. I especially like toying with the files that I put up on Instagram because I think the limits of that app mitigate against the need to try for "ultimate" image quality, and invite more playfulness.

I had an ulterior motive in walking downtown today. I'd gotten a promo e-mail from Whole Foods/Amazon.com that listed a bunch of holiday specials and I wanted to get one of their really tasty apple pies. With my Whole Foods app and my Prime Membership the pie was 35% off the regular price. It's my contribution to this evening's dinner. I think we're having something healthy like an Asian chicken salad - with much emphasis on the salad. I guess it's my underhanded attempt to mitigate the arch healthiness of the low fat/high vegetable content main course with a full fat, chunky and crusty pie as a balance. Mission accomplished.

It was nice, after an hour and a half of walking and shooting and fiddling with a polarizer, to step into the massive air conditioning of the Whole Foods store. I was hot and thirsty so I also bought a bottle of sparkling grapefruit soda. I rarely drink sodas (pop? soft drinks? whatever your dialect calls sugar infested, carbonated beverages) so the sugar in the Izzie soda gave me a bit of a sugar rush. It reduced my inhibitions to the point where I had my phone out searching for more cinema lenses to buy --- right now. But the rush was followed by a sugar crash just in time to keep me from more and unnecessary negative cash flow. But there is something about that 12mm Meke cinema lens for m4:3 that interests me...

It's nice to have a camera in my hands. I suspect the same is true for you as well. It's both a passport that allows us permission to look and investigate the visual components of life and it's also a security blanket which allows us to carry and demonstrate one of the entertaining purposes in our lives.

Everyone in downtown today was behaving well. Even the generation Zoom kids riding on electric scooters were wearing masks as they terrorized pedestrians on the sidewalks. Maybe there's hope yet.

I have a couple of people coming in for portraits (one at a time) on Monday. I guess it will be time to put the m4:3 stuff on hold for a day and re-engage with the bigger cameras. I'm thinking of going to the other extreme and bringing out the Lumix S1R. Every web portrait needs to start out as a 47.5 megapixel file, right? (Sarcasm strongly implied). 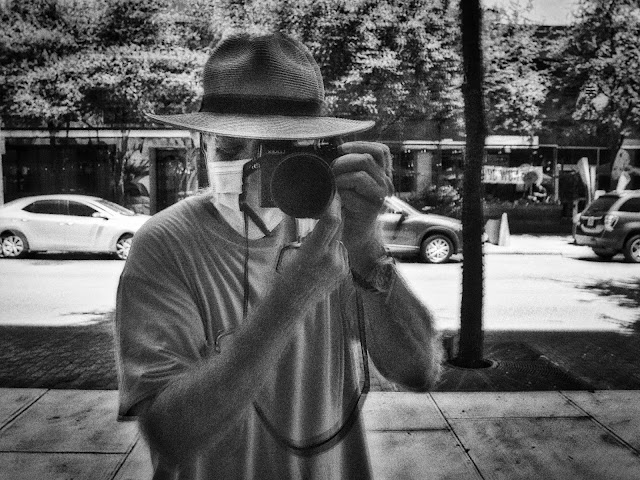 This is me out for the July 4th walk. It's the first time in years that I did the walk in a collar-less t-shirt. It felt...so casual.  The broad brimmed hat is a given in full sun in the Summer. And the mask is all the rage this season. I'm wearing one of the ones I saw on the runway at this Spring's fashion shows. (Kidding).

Early last week I bought another box of 50 face masks. Belinda thought I was coming close to hoarding since I still haven't run through the first box I bought a while ago. But then the revised lock down suggestions hit, along with the upward spike of infections in our city and now I look prescient. Since the governor and mayor have mandated masks in public I'm sure there will be another run on them this week. I'm not wearing glasses in this image because the GX8 has a diopter that works for my optical pathology. Nice. Double pane glass so there's a multiple image.... 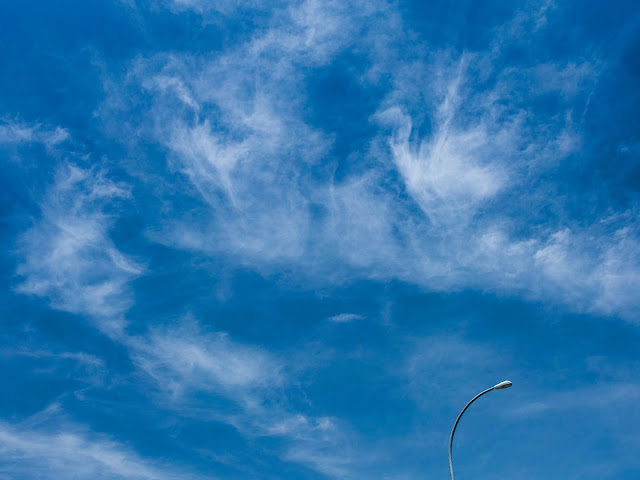 Kind of nutty but since we've had lots of Saharan dust and an abundance of cloudy days as well I was so delighted to see actual blue skies today that I had to document them. But that's something I guess I've been doing for years... 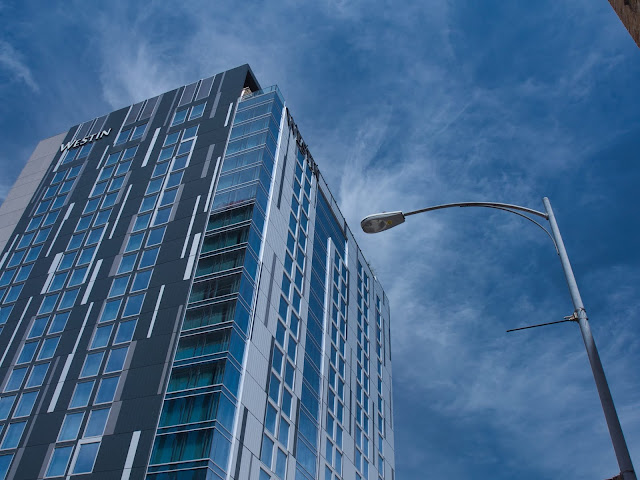 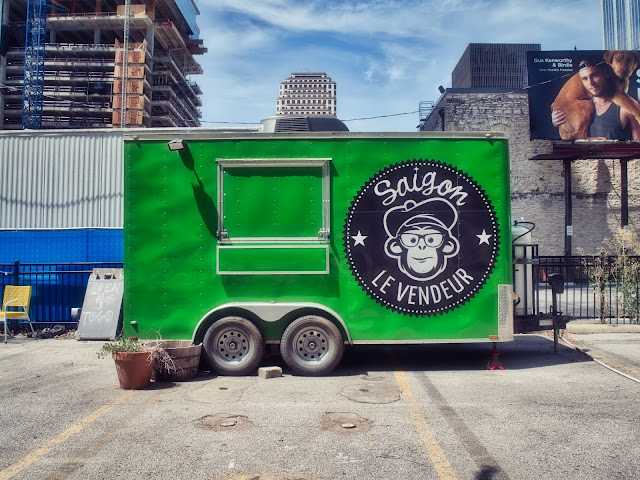 The traditional July 4th celebrations are cancelled this weekend here in Austin. I'm sure some neighbors will set off fireworks and that's okay. We'll plan on a quiet evening at home. Just like last night. And the night before. Etc.

Still, the house is big and comfortable. The neighborhood is safe and beautiful. The refrigerator is stocked full of great stuff, and then there's that pie. I know what I'm having for breakfast before swim practice tomorrow. Coffee and Pie. Just like they used to have on Twin Peaks.

Hope everyone has a modicum of fun on tap for this evening. I wonder which camera I'll walk with tomorrow and where we'll walk. Might be time to call my guy out in Dripping Springs and see which one of us can get to the top of the hill first...


Posted by Kirk, Photographer/Writer at 18:37 2 comments: