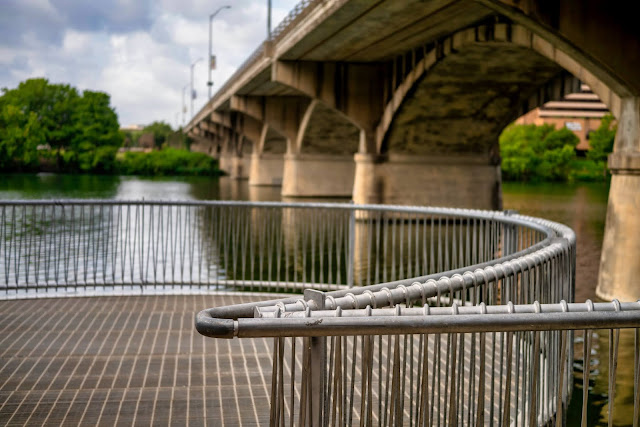 An observation deck under the Congress Ave. Bridge. Austin, Texas.

I seem to be settling into a rhythm these days. It's Tuesday so I know I have a swim scheduled with my masters team at 6 a.m. I've stopped taking a camera to the pool with me. It seems intrusive. And I've photographed our pool in so many different ways that it's starting to feel redundant. If something spectacular happens, well....I still have my iPhone.

Today I shared a lane with Margaret. We were diligent and pretty much stayed on task. The weather is heating up here so we decided to leave the cooling aerators on during practice. That meant swimming through a shower of big, splashy drops at one end of the pool. And as the sun came up the rosy, warm morning light played through the arcing water making a light show for the swimmers.

Yesterday I spent too much time sitting around the office, doing things like making web galleries for several doctors, and paying that overdue business insurance bill. I didn't want to get stuck in my desk chair today so after breakfast I decided to do one of my walks with a camera. I mean, really... we've got all this time to go out and play and most of us are spending it sitting in front of our computers pretending to be working but really just cruising through our favorite websites, reading too much news, and window shopping for cameras when we're mostly not using the ones we already have. I wanted to throw off my pretension that I was making any sort of meaningful progress while sitting in front of a monitor soaking up the blue light.

I set myself to a task today of coming back with photographs I hadn't seen or taken before. I wanted to look at my small part of the world a little differently. I took the world's best camera and lens combination with me. It's the Sigma fp with the 45mm f2.8 Sigma lens. I don't want to get all up in some escalating Mac versus PC style argument so just take my word for it. The Sigma fp is strangely better than all the Sonys, Canons and Nikons combined. (Not being serious; don't bother posting rebuttals...).

It occurs to me that most photographers want to be out photographing but it seems harder and harder to get motivated for some of us. I stepped back and looked at my own reticence and decided that it's the same as the pool having been closed for a couple of months. You lose your edge if you don't do your craft consistently enough. If there's no financial incentive, and you've been restricted from taking the kinds of photos you want to, the push to get out the door with a camera in your hands gets harder and harder every day. Or it seems that way.

When I return to the pool after prolonged time off I feel kludgy and slow, tired and sore. It's easy to decide to take the next day off. And it gets easier to back away more as the days go by. But I've learned to depend on a bit of discipline to get back into shape and stay there. I make a schedule and promise myself to keep it. If I feel like crap when I get up in the early morning I tell myself I'll just drive over to the pool, grab an empty lane and just screw around. Once I get there and put in a few hundred yards I get renewed energy and my stroke starts to feel better. I toss aside my original lazy intention and join the workout in earnest.

Each successful day builds a base for future success. The harder I swim the better I get.

Today was a good day to be out walking early. We're having our first heat wave here and the later we get into the days the hotter and more humid it becomes. In mid-morning the walk started at 83° f and by the time I made it back to the starting bridge it was 88°.  The camera felt small and light on a strap over my shoulder.

I've spent a lot of recent walks photographing buildings and parts of buildings; and when there is great sky to photograph I catch a lot of that. Today started out with soft clouds and pushed me to concentrate on more subject matter at ground level. More shots that didn't depend on a beautiful, rich sky for their essential attraction. I also have become more interested in using the 45mm wide open or near wide open when I can. It gives such nice background rendering (see above). 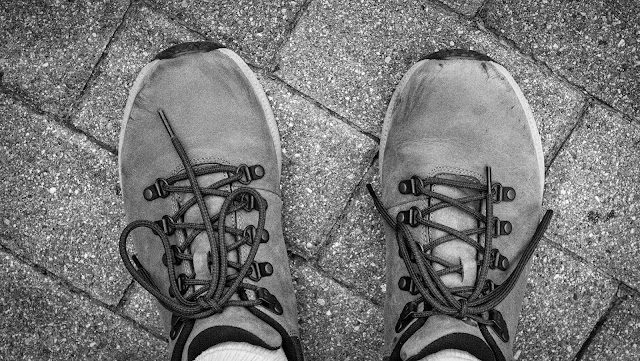 One of the secrets of enjoyable walks is wearing good shoes. I have three pairs of walking shoes that I really like. Two of them are Keens and the third ( just above) is a pair of Merrills. They have Vibram soles and while the Keens are a bit stiffer and more shock absorbent the Merrills are close behind
and quite a bit lighter. Now reminding myself in the moment to
get some leather treatment on these pups... 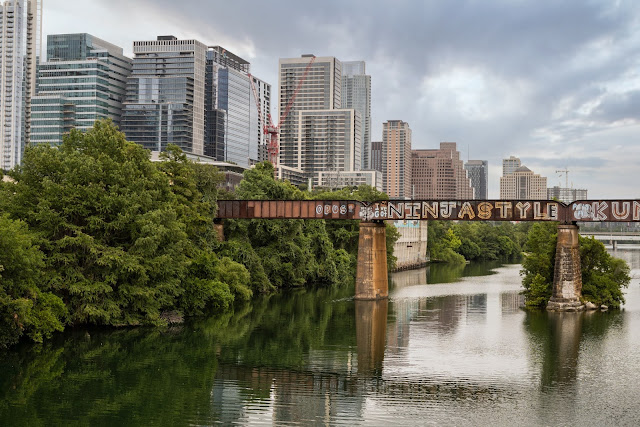 This is the perennial starting point view for many walks into downtown.
There are a series of North/South bridges that connect south Austin to downtown.
Nearly all of them have pedestrian walkways while one is strictly a pedestrian bridge.
That's the Pfluger Bridge and it's the one I'm standing on to take this photo.
It's close to my starting point which is also my ending point. 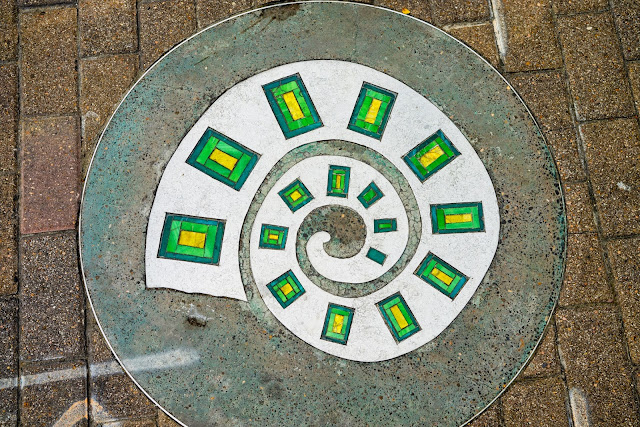 I've walked over the top of this art work for years and never took time to stop and really look at it. There are a series of metal and colored glass constructions embedded in the sidewalk on 2nd St.
They've seen some wear and tear but I find them attractive and naively charming. 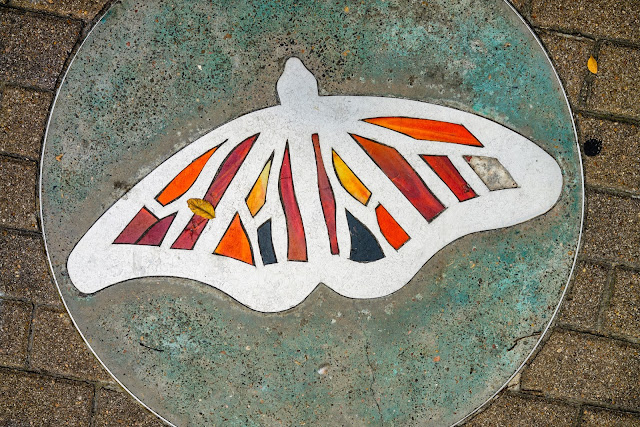 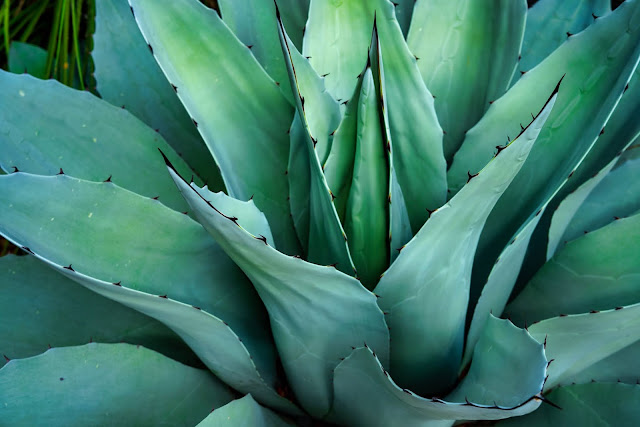 I'd been looking for one of these yucca plants to photograph but most I've found are bruised or have dead spots on them. Wouldn't you know I'd find one in almost perfect shape over by the Four Seasons Hotel? Figures. 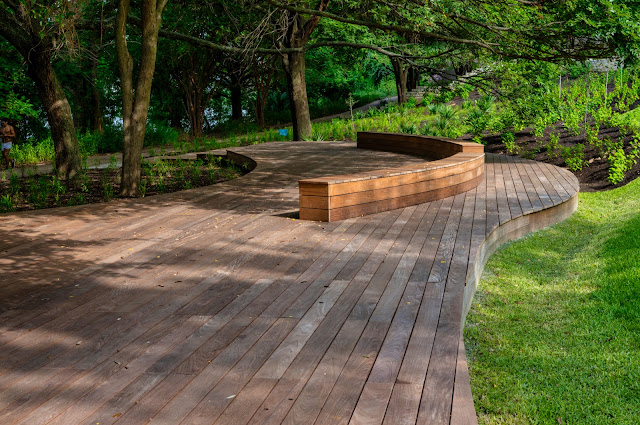 I walked through here about 10 days ago and this shaded seating area wasn't here.
It was built and donated by The Trail Foundation which is a private group
dedicated to improving and maintaining the wonderful hike and bike trails running
around our downtown lake --- which is also part of the Colorado River. 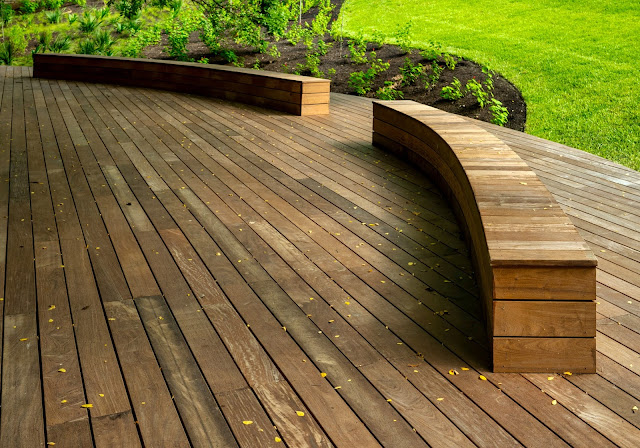 It's a beautiful little spot on the North shore of the lake, just east of the Congress Ave. Bridge.
They must have just finished the project because there's not a spot of graffiti on any part of it. 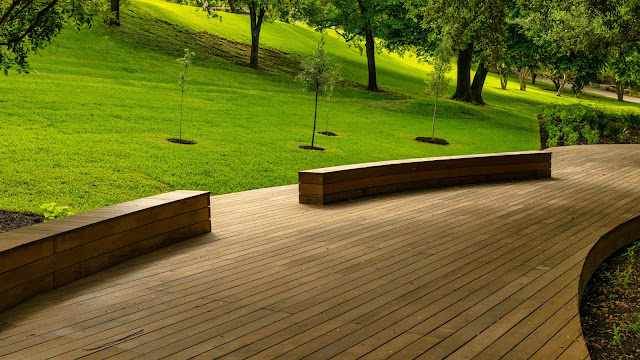 The lighting was so nice on this spot today. I hope the compression in Blogger doesn't
render it ugly and smashed up. 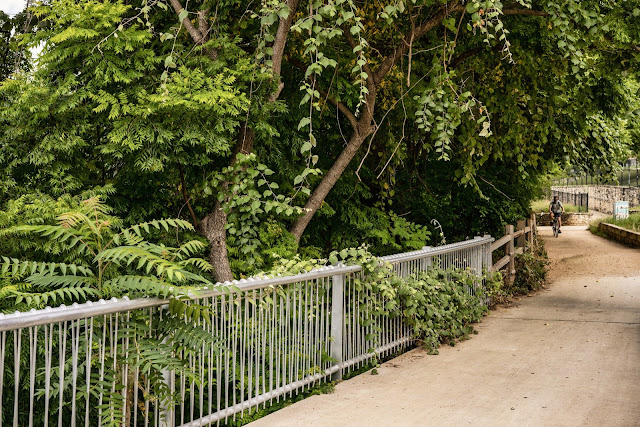 The way the Sigma fp and the 45mm lens render foliage is so natural.
I feel like I'm standing there, sweating and admiring the trees and their leaves... 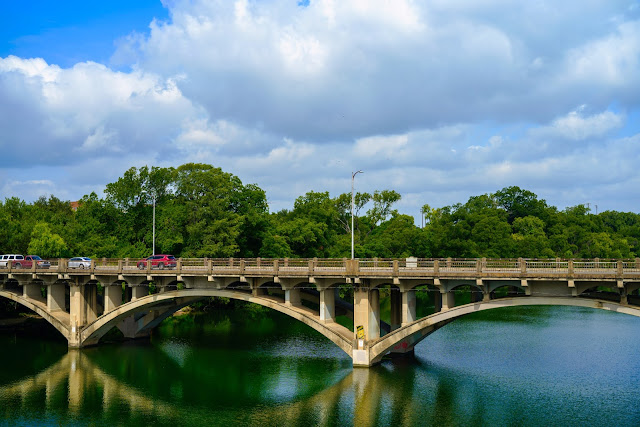 This is the opposite view from the Pedestrian Bridge. The bridge in the photo is the Lamar Bridge.
It used to be one of the main bridges that runners used to go North/South when running various loops around the lake. But the sidewalks on the bridge were designed at a time when traffic was much slower and much sparser. They are extremely narrow. Too narrow. The city began production on the Pfluger (Pedestrian) Bridge after several runners were struck by cars and killed.
It's still a handsome structure, but in a very 1950's way.

When I left my car this morning and started the walk I was already tired from getting up early and swimming hard for a couple miles. The first fifteen minutes of this adventure felt slow and groggy. There was an annoying allergy drip down my throat. My energy was at a low ebb. I thought, what the hell, I'll just make a short loop and head back home.

The further I got into the walk the better I started to feel. By the time I got to the farthest side of the route I was feeling great. I was in sync with the camera and lens combination and seeing things in a fresher way that I have in a while. By the end I was happy. Really happy.

Walks are unpredictable. Sometimes the cadence of walking takes over and I'm reticent to stop and take photographs. A week or so ago I took a camera, walked for an hour and a half and took two photos. When I reviewed them I erased them and decided that sometimes a walk is just a walk. Today I felt like this was a balanced walk with a camera. There were things that piqued my interest and there were stretches where it just felt great to glide by and stay with the rhythm of my breathing. And then there are the walks where everything seems interesting and photogenic and I come home with hundreds of photographs and the realization that I barely covered a mile or so.

Another funny aspect of walks is that when I walk in the neighborhood with Belinda, or out in Dripping Springs with Emmett, I never bother to bring along a camera. With Belinda there are too many interesting things to talk about and our mission is exercise. With Emmett there are too many hills, the pace is quite brisk and the camera would just slow me down.

I would say that I appreciate the solo walks but they are never really "solo" if I have a camera with me.

I walked with a camera today. It felt good. It felt like a happy process. The secret is to walk again tomorrow. And the next day. Then it becomes a good habit. Besides, I've got the time right now.

Medical notes: I bought a blood oxygen tester a few weeks ago. I thought I'd check my VO2 every once in a while to make sure I was healthy. Low oxygen levels can be a sign that you might have developed a respiratory disease (Like COVID-19) while other symptoms might not have emerged yet.
I've had fun testing myself. My blood oxygen generally run between 96-98. I had no idea that there would be as much variation. I thought homeostasis would iron out the ups and downs.

But the interesting thing is that this device is giving a constant readout of my pulse rate. If I take the device to the pool and clip it onto my finger after I get out from a hard workout my pulse rate can be as high as 135 or 140 (it drops pretty quickly right after the last set). By the time I'm sitting in my car getting ready to go home it's dropped into the 70's and, sitting at the dining room table, by the time I've finished eating my combination of yogurt, muesli and blueberries, my heart rate settles down to the mid to upper 50s.

If I sit in a chair for an hour reading and relaxing I can watch the BPM dip all the way down to the low 50's.

I didn't realize just how much a person's heart rate would vary depending on their activity. It's been fun.
If I try to make my heart rate slower the effort of trying to control it speeds it up. Same with the O2 readings. I guess the mantra for today is: relax.

And create or recreate a habit of photographing.

Posted by Kirk, Photographer/Writer at 16:23 15 comments: