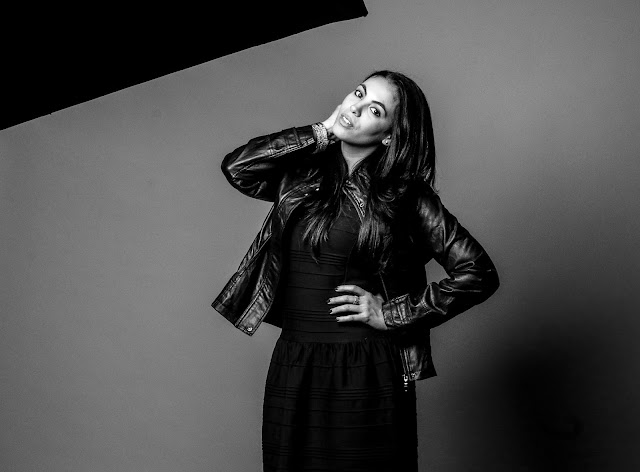 The shot in between the "shots."

It's funny. I worked with Gloria for two days at the big Photo Expo in NYC where I was shooting and speaking for Samsung for the launch of their Galaxy NX camera. I would have Gloria or Naomi "model" for me against a gray seamless backdrop and we'd try different poses and different lighting. Sometimes I'd switch lenses. All the while the camera was feeding high res images to a couple of large monitors suspended over the shooting area. That way people could see what I was getting in real time.

Of course, that meant I had to be at least mildly competent because there was no way to retouch, post process or do more that color correct in the camera --- before shooting.

But the funny thing is the process of both model and photographer becoming more and more at ease as the hours and days progressed. We were all a bit stiff at first, even though the people on both sides of the camera had lots of experience doing their jobs. It's just a bit different at a trade show when dozens or hundreds of people are gathered around giving you real time feedback and critiques. It was the first time I'd photographed while wearing a headset that would amplify my voice so I could give a rambling "play-by-play" to the audience.

I counted the actual exposures. We banged through nearly 5,000 shots during the two days I spent at the Javitts Center. By the end we were laughing, having a good time and relatively immune to the crowds.
We stopped shooting stuff we thought the audience might think is cool and started shooting stuff for ourselves. The way we do most work.

Occasionally there were glitches. A camera would freeze or a light would overheat but we had a ready team of camera specialists at our beck and call and the problems vanished quickly. We also learned the right cadence of shooting to prevent overwhelming the cameras and the wi-fi system.

But my takeaway from the whole process was that there is always a warm-up process to a good "people" shoot. If I could I'd take hours to do portrait sessions. Then I'd know I finally got on the same wavelength as the model or subject and that the expressions I really wanted would get done.

I wasn't wild about the Galaxy NX as a concept but the sensor was good and the two lenses I used most of the time were excellent. At least as good as the best stuff from the traditional companies. Wish I still had that 85mm f1.4. It was close to perfect.

Added after initial post: I thought it was warm yesterday but here in the hills it only hit 105°. I just saw a weather broadcast and found out that we set a new record for the 13th of July = It hit 108° yesterday and, coupled with the humidity it felt like 113°. That's too hot! I'll play with my camera inside today...

Hot times in Texas today. We're heading toward 105° today and the weather people tell us that when the humidity is added in the heat "index" will be about 110°. At least that's what it will feel like.

I hit the pool at six o'clock this morning and my lane mate, Margaret, kicked my ass for an hour. I like something like a ten second rest interval between 100s but Margaret decided it would be good for me to shorten those intervals to 5 seconds. Two gulps of air and go. Who argues at 6 in the morning?

It wasn't a banner day for yardage but the yards we got done were high quality. And the coffee tastes so much better afterwards.

On deck for today, in response to two days with the G16, is a Lumix S1R coupled with a 50mm f1.4. No big plans but I thought I'd drop by Intelligentsia Coffee and make sure yesterday's perfect cappuccino wasn't just a fluke. 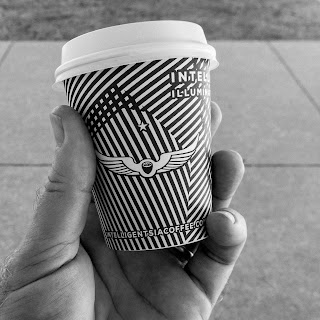 Posted by Kirk, Photographer/Writer at 10:02 2 comments:

Remembering when it was okay to hang out at a favorite restaurant. 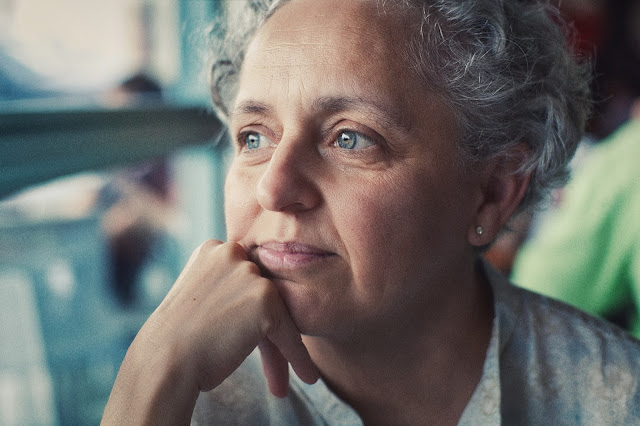 I was playing with a Canon 1Dmk2 camera and a 50mm f1.4 lens. We'd been to the Blanton Museum in the morning and dropped by the Galaxy Cafe on West Lynn St. for a late lunch. Belinda was looking out the window and I brought the camera up to my face and clicked the shutter.

Everything felt calm back then. Now we live with much more trepidation. We haven't dined in a restaurant since the first week of March and we plan more carefully when we leave our house.

It's funny, to me, that a photograph can so clearly communicate calmness. But there it is.

I have to confess that those big, solid Canon 1D$ cameras were a lot of fun to play around with. Good for the biceps as well. Discreet?  Nobody paid attention to cameras back then so who cares?


Posted by Kirk, Photographer/Writer at 09:28 3 comments: