Chrome Fuji X100V or Black Fuji X100V? Aesthetics versus Stealth? Also, winnowing down the number of cameras in house. 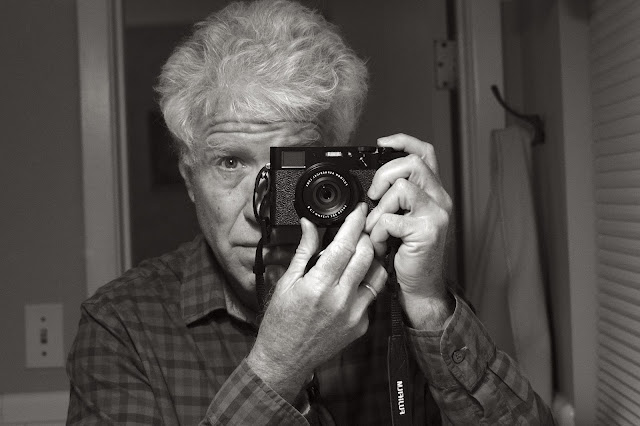 I've been making good progress on one of my goals for 2020; getting rid of a lot of the photography gear I no longer use. But it's amazing to even write a sentence about accomplishing goals for 2020 since the goal posts have continued to move throughout the year.

Earlier in the year, after the shutdowns started, I made a contribution of video-oriented camera gear to Zach Theatre's marketing department. A camera, shotgun microphone, microphone pre-amp and mixer, a couple of LED lights with stands, and a big, fluid head tripod. It turns out that we had a lot of inventory redundancies and since it was prudent to keep as few people in the mix as possible working on projects there I thought it would be a good idea to train and equip a smart theater employee to do many of the video tasks I'd done in the past. It's worked out well.

It felt great to get rid of stuff and this mindset started me down the path of either downsizing or donating at every opportunity. I sold two duplicate Lumix S1x cameras and replaced them with one S1H. A lighter load overall but in the trade I ended up with a more capable camera for my own video work.

While looking around the studio I saw that we had seven different electronic flash monolights and hadn't used more than two all the previous year. We packed up three, with modifiers, and donated them to a struggling school. I sold another one to an up and coming photographer.

I recently gifted and/or donated six different point and shoot digital cameras of various brands and vintages as well as a couple of micro four thirds camera and lens combinations. Young people love them. And, do I really need more than three m4:3 cameras? I'm left with the GH5, the GH5S and a G9. I wanted to thin the inventory more but those three are so addictive and effective I couldn't bear to let them go...

With three full frame Lumix S1x cameras and three Lumix m4:3 cameras plus the Sigma fp (fun) camera I think we're at our lowest stage of camera ownership since the film days. And today I also spun off a couple of big, heavy and mostly unused Sigma f1.4 Art lenses for the L-mount system while adding a used and comfortably priced 20-60mm Lumix lens back into the mix. I'm trying to make the system smaller and lighter than before while maintaining the core capabilities of the system. I still have some duplication in the full frame system; especially where zoom lenses are concerned. I have the 24-105mm, the 24-70mm S-Pro, and now the 20-60mm but each does something unique that I value so I'm stuck for now.

Why get rid of the two big Sigma Art lenses? Mostly because they were enormous and heavy and I could not use either of them on a hand-holdable gimbal. But also, in the case of the 35mm Art lens, because in actual use the 24-70mm f2.8 is fast enough while being equally sharp and much more flexible.

I've just thinned out the aging collection of heavy and battered light stands and I'm down to one roll of grey seamless. The tripods though are like children and I can't decide which ones I like best and which ones need to head off to the tripod orphanage. At this pace I'll be down to the white walls,  the desk and a couple chairs by June.

But, of course, there is a flaw in the process. It came in the form of a random and unplanned purchase of a slightly used, Chrome Fuji X-100V. Now that I've adapted it to the way I like to use cameras it's triggered a different response from me than the previous X100's I've owned or used since 2011. It's growing on me quickly. I like the new lens hood I bought for it. I like its feel with the Sigma grip attached to the tripod socket. I even like the Canon PowerShot G shoulder strap I'm using on it.

The one remaining issue with the Fuji X-100V is this: It is available in two finishes. You can have it in a beautiful chrome finish which looks so much like the design and material of the classic Leica M3. Or, you can have it in a classic, black finish that's a bit stealthier and more like the Leica M6s I owned in the 1990s.

I love the look of the chrome but I value the discreet charm of the black. Then a good rationale rushed to mind. I have often written that cameras should travel in matched pairs. Same batteries, same accessories, same storage medium. Why not get one of each?

I did buy a black one today to keep the chrome one company. Side by side I still can't decide which one I like best... I'll know more when I've had the chance to use the black one out and around.

I guess you could interpret this as an admission that I like the X100V very much. The quality of the files is the effective tipping point. They're gorgeous.

Posted by Kirk, Photographer/Writer at 20:34 21 comments: