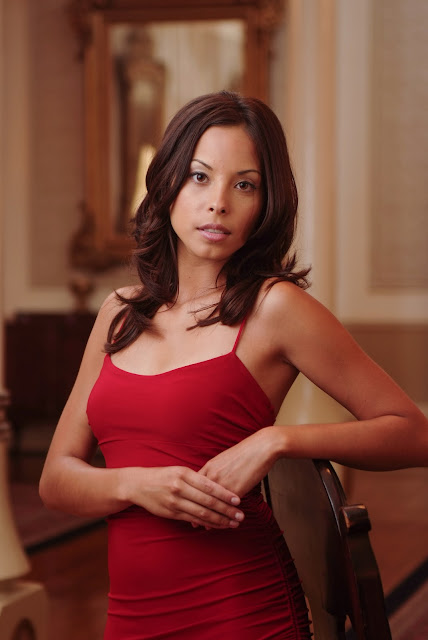 Some time, way back in 2008, I finished writing and photographing for my first book. All except for the cover illustration. The subject matter was "professional lighting on location" and the hook of the book was using small, battery powered electronic flashes for the lighting. Seemed appropriate to make a portrait on location and to use small, battery powered flashes. I went online to look for an appropriate model and then called the historic Driskill Hotel to ask if I could use one of their nice august banquet rooms for a location.
I guess the usual way of doing a photo like this would be to shoot a bunch of poses and then move to multiple other locations and shoot more bunches of poses. I am not so indecisive. In this case I had an idea of what I wanted. We shot the image. I paid the model and we were done.
It's not the most spectacular portrait I've shot but I liked the red dress and the model's expression and importantly, I shot it in an aspect ratio that worked well for the proposed cover. I did a bit of retouching that is not reflected here and then sent the image to the publisher as part of the whole book package. The publisher provided no feedback and ran the image as sent. So much for the idea of a tight relationship between editors and writers...
Looking back at my gear from that period I'm fairly certain I used a large umbrella on one side, a reflector on the other and a couple of flashes aimed back toward the background. The flashes were Nikon SB-28's or something similar and I used a Nikon trigger in the hot shoe to make it all go "flash!"
I thought to write about this right now because I was asked to deliver some images quickly after an event tomorrow evening and I wanted to make sure I had the latest rev of Lightroom on the laptop I brought with me to Santa Fe. I wanted to make sure I had the right password for the Adobe Creative Suite in my brain and I wanted to get a folder set up to streamline the process tomorrow evening.  And this photo was sitting in a folder on the desktop. A sign from the blogging gods…
I often think of myself as someone who flies by the seat of my pants but really I might be overly prepared instead. Why else would I bring along two quarts of Subaru's synthetic motor oil (just in case) when the car has only 8,000 miles on it and was serviced by the dealer last Monday? If I were scattered and relied mostly on luck then why do I have eight fully charged back-up batteries for the cameras I intend to use on the job and four back-up batteries for the third camera I brought along....just in case? And what about that first aid kit in the rolling duffle bag? And eight pairs of socks for six days of travel? And the portable fusion reactor?
Seems my self-image is awkwardly skewed.
How's the trip going so far? It's been pleasant. Over the course of two driving days I think I've discovered a long lost state of calm existence. Being quiet with myself for hours at a time. No music on the car stereo, no texts, no e-mail, no phone calls. Just driving and musing about life, love and the process of existing without an overarching agenda. The drives turned out to be peaceful, non-eventful and reflective.
The hotel is very nice. The client was thoughtful enough to put me in a room on the second floor that opens out onto a private patio which in turn opens out onto the swimming pool area. The pool isn't long enough to swim good laps in but I could practice endless flip turns --- with a breath in between each one.
I got into Santa Fe around one p.m. and was able to check right into my room. There followed a pleasant conversation with my client and with the event director and then I got to go have coffee with a famous writer of thriller novels, John Camp. That was a wonderful two hours over coffee. He's a remarkable man.
I hope I listened well enough!
I've got 24 hours now to do with as I please. I think I'll pull out a camera and go out for a long walk. Watching late afternoon evolve into evening and then into night.
Sometimes the benefit of getting away is just re-learning how to spend time with myself. Nice.
Posted by Kirk, Photographer/Writer at 19:32 7 comments: