What a Wacky Week. Also, "The Profit Pairing." 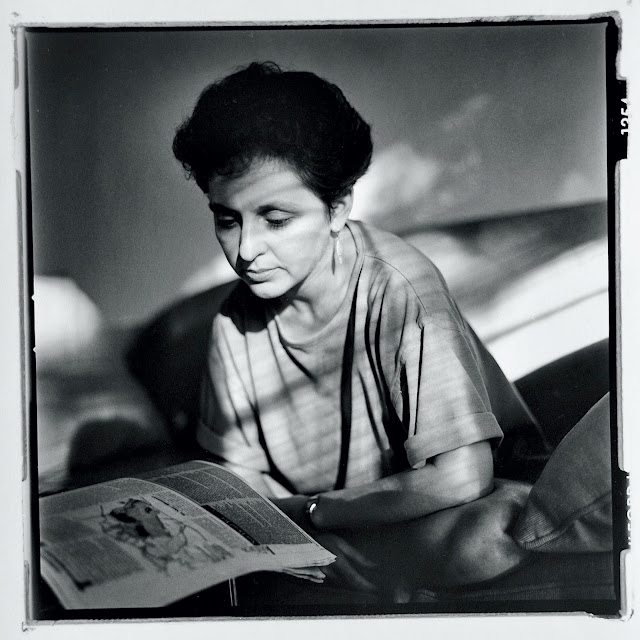 I left Austin in the rain last Monday. My phone mapped out the best route to Lubbock, Texas where I spent the night and then routed me on in to Santa Fe around lunch time on Tuesday. It was an easy couple of drives and I don't regret my decision to drive to my assignment instead of flying. Our event and my room were at the Eldorado Hotel. I slipped into the valet parking zone in the underground garage and a bellman whisked my luggage onto a cart and followed me to the front desk.

My room was on the second floor facing in toward the infinity edge pools. I had a private, outdoor sitting area and every amenity I could think of. And nearly 28 hours to enjoy Santa Fe before our first event for the corporate client. That event was a rooftop reception at the hotel with the mountains in the far background. This gave me ample time to get settled in and to walk the town.

I brought a lot of cameras and used all of them for odds and ends or just out of boredom but I always defaulted to one particular camera and two lenses when I was actively working for the client. My choice for work was the Panasonic S5 coupled with either the Panasonic 24-105mm zoom or the Panasonic S-Pro 70-200mm zoom. With that camera and those two lenses I felt like I could cover anything. Add in the dedicated Godox V1 flash and you have an event package that just flat out works.

If you can't figure out how to leverage this pairing to make profitable photographs then I venture it's not the gear that is holding you back...

The assignment had me shooting in a manner I don't usually pursue. The client wanted big rich files for "later" but wanted, each morning to have a "walk in slide show" of images from the previous day. For example, the first evening there was the rooftop reception for about 250 guests. The weather and the scenery were perfect. I worked the crowd with the aforementioned combo and shot groups of two, four, six or eight along with candids galore. The production company we were working with needed relatively low res images, sized to 16:9, to show on big screens on either side of the stage. The challenge for me was my need to shoot big raw files for future use but to also shoot smaller, jpeg files already sized for video projection.

Since the S5 camera has two card slots and each card slot can be set to shoot a certain type of file concurrently it was easy enough to direct the raw files to card #1 and the Jpegs to card #2. Knowing that even if I set a crop or a smaller file size for the Jpegs the raw files would be unaffected fit the bill. I used medium sized Jpegs shot at "standard" quality and in-camera-cropped to 16:9. The finder image showed the crop but it's not such an extreme crop from 3:2 that I couldn't figure out how the final raws would look.

After the event I went back to my room and downloaded the Jpegs onto an SSD drive and then imported them into Lightroom. I'd shot about 500 images in the hour I was working and quickly narrowed the take down to about 200 images which I color corrected and output to a separate folder on the drive. The outputs were exactly 1080X1920 pixels. Just right for the production team to suck into their presentation program and get up on the huge monitors.

Since I didn't know which images from each day would be in the next morning's slide show I just went ahead and made the two format capture methodology my standard for the week. It was quick and to the point.

Everything I shot in the hotel ballroom, the reception areas and the break out rooms was done with the S5 and the two full frame lenses. And all the material was shot as both raws and Jpegs. But I spiced up yesterday's off site portion of the day by using the Panasonic GH6 and the Olympus 12-45mm Pro lens instead.

We wrapped up the day's business sessions by noon and people went off on different fun excursions. Some played golf, some went off-roading in Jeeps with guides and some went out to a wonderful lunch at the fancy Compound Restaurant followed by a walk through the galleries on Canyon Road hosted by one of the gallery owners. You can guess which one I ended up on.... yes. The Canyon Road art tour.

I set up the Panasonic camera the same way. Raws on one card (the CFExpress card) and Jpegs on the other. I chose the camera and lens because it was smaller and lighter than the full frame combination and I had already decided I would ditch the small tour bus at the end of the tour and enjoy a walk back to the hotel instead. The majority of my photographs from the gallery tours were in bright light and the camera worked like a champ.

Yesterday was our only long endurance day. Breakfast started at 6:45 and we were in place for the business sessions in the main ballroom by 8 a.m. I photographed speaker after speaker at the podium. Or more likely pacing round the stage. Wide shot, waist up and a series of tight headshots timed to capture the expression that made each speaker look brilliant and interesting. After the session we separated into our groups for the fun activities. There was a non-scheduled break in the late afternoon and the we gathered together again for a cocktail reception followed by a banquet dinner, an auction and then a private concert with the Bellamy Brothers. A very popular country and western duo. They've written an amazing number of hits I only knew because of the other artists who covered them.

The concert lasted till ten p.m. but I exercised my prerogative to de-camp at 9:30 so I could get a jump on editing down to a reasonable number the selections for the day. And to also have time to tweak whichever images needed a bit of help with contrast, exposure of general white balance. I handed off the hard drive around 11:30, showered and went immediately to sleep.

We did one more business session in the main ballroom today and then most of the attendees scampered off to make their flights back home. Whoever home is.

My client booked me in for an extra night at the hotel (fabulous hotel!!!) so I could recuperate and also have more time to enjoy the trip. I hit Café Doline for lunch and then hiked back to Canyon Rd. on a more circuitous route to look in on the galleries we missed yesterday and then over to a gallery on Marcy St. to look at some oil paintings I'm interested in. Of course, the one day I have mostly free is the day we get the most smoke from the wildfires raging in nearby parts of the state. Since we're at 7100 feet above sea level here the compounding of the altitude and the thick smoke started to take its toll on my interest being out and about. When my Apple Watch showed me my blood oxygen was down to 92% I decided to pack it in and head back to my hotel room. I may be in good shape but....

While I think the best image quality came from the S5 and the big lens combo I have to say that the highest degree of photographic enjoyment most certainly came from the GH6 mated with the Olympus 12-45mm. It just feels so perfect when you're actually walking around all day photographing stuff.

I've backed up all my raw files to two hard drives and I'm leaving the camera cards untouched until I get home and get them all uploaded to the cloud. I've overshot, as usual, and I'm hell bent on thinning out the herd of photos before I start correcting and post processing.

I also brought along the Leica SL2 and a bevy of single focal length primes. They were the least used of any of the inventory. In fact, the one afternoon I went out shooting just for fun I left with the SL2 and the 65mm only to come back to the hotel with fewer than a dozen images on the card. I dumped the camera into a bag, grabbed the Panasonic GH5ii with the 25mm Summilux and headed straight back out. And I didn't come back until I had hundreds of decent shots. It's just more fun a camera to move quickly with. Especially as you become oxygen deprived.

This blog post should be longer but I'm taking a break to take a nap... Ciao.

Posted by Kirk, Photographer/Writer at 18:10 7 comments: