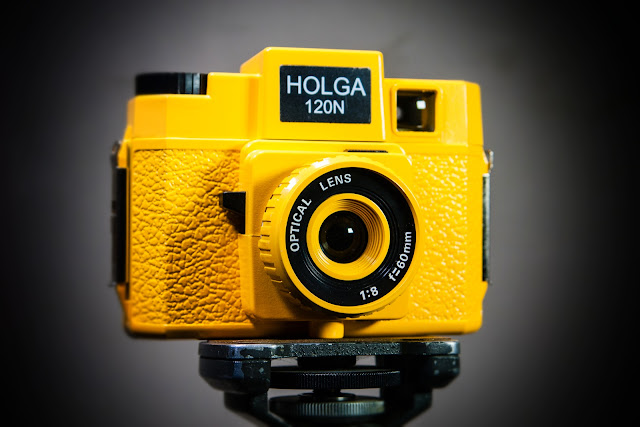 I think it can be healthy to take a break from the idea that we somehow have complete control over the images we create. I put a Holga on my Christmas list because I thought it might be somehow fun to roam the city on a sunny day with the camera loaded up with ISO 100 black and white film and take the technical processes out of the mix and go out with the intention of a pure seeing adventure.  Freed up from thinking about focus and exposure (and to a certain extent, even composition) my mind might concentrate solely on finding subjects that it wants me to photograph. It may be that "no control" has attributes that are as valid as "total control", which itself is an illusion...

Besides, a medium format camera for $29?

Posted by Kirk, Photographer/Writer at 17:56 22 comments:

A New Camera For The Post Digital Art Age.

I thought I had it all figured out. I discovered that I really liked EVF cameras and I spent last year selling off the "dinosaur" technology cameras and buying up really nifty and break-through-y cameras like the full frame Sony a99, the half frame Sony a77s and 57s, and even a smattering of teensy-tiny cameras like the Nex 6 and Nex 7. I toyed with the littlest Sony RX100 and even played around with the RX1. I thought I had it wired. I'd spend 2013 happy as a pig in poop, playing with the metal-ly knobs and pushing the oh so sleek and demure direct buttons.  I was like a happy child, sitting on the floor grabbing handfuls of beautiful lenses and drawing them into my arms like teddy bears for toddlers. Then my whole gear oriented world fell apart under the two pronged attack of information chaos and gift giving.

You see, I watched David Hobby guest star on the DigitalRevTV with ultra kool Kai. The premise of the show was to hand David Hobby a crappy, toy Buzz LightYear (trademarked by Disney!!!! Please don't sue me for just writing down the words!!!) digital camera. Two megapixels of whopping image creation automation just waiting for a master's touch. David (with Kai along for the ride) used the camera on five different location shoots to prove once and for all that "it's not the course of the arrows it's the horses for Indians.." thing that everyone says. Which I guess I translate as meaning that some photographers are so good that they can point anything at a subject and come away with exciting art. Did David make the grade? That part is totally subjective. You'll have to see for yourself "if the glass is half full of everything looks like a nail..."  But the video sure got me thinking about my bourgeois fixation with using the best tools around with which to do my work. That's for sure.

I looked at the video and then I looked around the studio with the deflation that comes from watching the ease with which a master seems to work. And with the most basic of gear. I spent all Christmas Eve meditating on my photographic existence. My failings and the gear that had become my aesthetic crutches. I spent the rest of the night burning sage, chanting and beseeching the photo gods to show me the way. The path to exceptionalism.  How could I rise up and embrace the bad tool/great artist paradigm. How could I make the transformation from hay to needle so that I could be the veritable "needle in the haystack"? Defeated and exhausted I stumbled back into the house just as the rest of the family was getting up on Christmas Day. Feeling hollow and worthless I went through the polite motions of opening my gifts and nodding a thank you to the family. Leica S? Check. Vintage, restored Piper Cub? Check. Yet another Italian sports car? Check. The hoary and clichéd case of vintage Bollinger? Check. Another smattering of Leica M glass to put on the front of my Sony Nex? Check (but why even bother.....).

And then I came to the haphazardly wrapped gift that would change my career, my attitude----dare I say it? It would change my life. Inside the reindeer encrusted wrapping paper, under the tissue, beyond the sticky embrace of the linear feet of Scotch magic tape was a simple box that contained the instructions from the photo gods for the happy continuation of my career---the bright yellow Holga.  It seemed to say, "If you are truly an artist the tool will never matter. If you can use me well you will have arrived.." 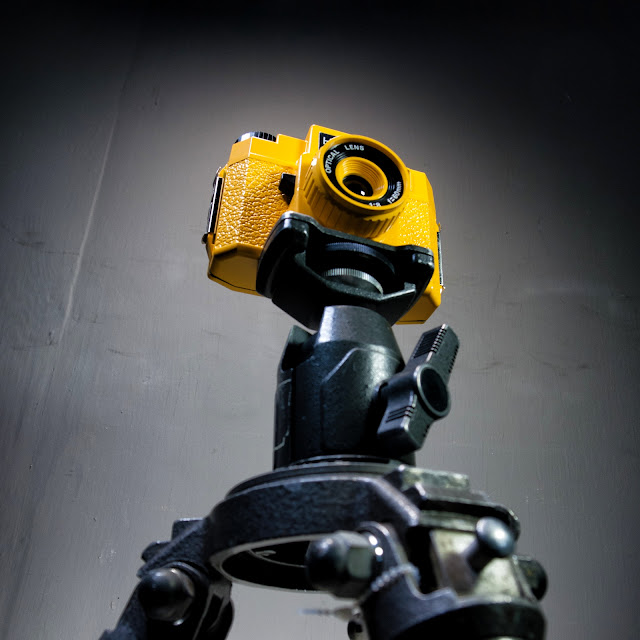 The life changing tool, perched on a five series Gitzo.

For those of you unfamiliar with this powerful learning tool let me provide a brief description. It's a camera made totally out of plastic (not composite resin...) that has a simple, plastic one element lens. It is somewhat zone focus-able and it accepts 120 film. The breed is famous for their random and art enhancing light leaks, and it is a favorite tool of people who've learned too much and subsequently journeyed to a different mental space than the millions of photographers who are glued to the technical side of photography like bugs on flypaper. It is the ultimate "un-think" camera. 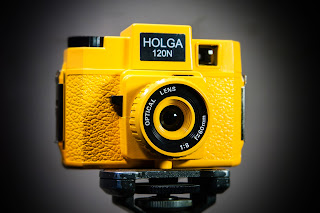 The game was now afoot. Me against my brain. Me against my training. And me against my heroin/nicotine/cellphone-like addiction to state of the art cameras. I had been challenged. The gauntlet thrown down with a spiky smack against the floor of my static reality.

I grabbed the camera and put a Black Rapid Strap on it. But that seem liked cheating. All affectation and no innovation. I took it off and went through the box to find the plastic shoulder strap (not neoprene or some other weighty composite, just real, mortal, thin, tearable, flexible plastic). I loaded up some Tri-X 120 film, taped all the seams on the camera with black electrical tape and headed out into the new wilderness of subject matter that used to be my own boring existence made fresh by the intriguing mystery and unknowableness of this new machine.  I've yet to pull the roll out and develop it because I find that "ART" slows one down and makes one introspective and tentative. But I'm sure every frame will be a new masterpiece. I'm anxious to see if I am an "Not the arrow, it's the Indian" (and I'm not that fond of curry...) or a "Horses for courses" kind of photographer.

But I am committed. So much so that I dumped all the other cameras into the dumpster at the pool just before the backhoe operator dumped in the fragments of rebar and cinder blocks from the new bathhouse renovations on top. Crunch. Crackle. There's no turning back now. If I am really the kind of photographer that I've tried to pass myself off as here on the blog we should be seeing art ooze and jump and gush out of the camera with reckless abandon. 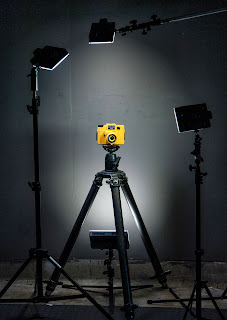 Watch out, David and Kai. I'm nipping at your heels.


(to the humor impaired, a notice: This was meant to be a tongue-in-cheek, or humorous essay. It is not meant to demean or ridicule any individual person. I did not really throw out my existing cameras, or get a Piper Cub airplane or Leica S camera for Christmas. I did get a Holga camera but more as a joke or humorous reference to my almost lifelong career. While the gist of the article was inspired by the video with David Hobby and Kai from DigitalRev it is not meant to be disparaging or critical of those parties. I found the original video to be humorous and fun. The Visual Science Lab cannot be held responsible for fluctuations in interest rates, increases in UV radiation emitted in conjunction with or in spite of any action we have taken in the past or might take in the future. Our use of the super powerful laser to punch holes in the moon has no link to past or present religious affiliations. The payment of all invoices is still due in ten days, net. While we may or may not serve undercooked shell fish at our next Luau you are hereby warned that you consume all VSL provided shellfish at your own risk. While our writing is in English we cannot be held liable for dramatic readings by John Malcovich which are recorded and subsequently played backward and any satanic or even antiseptic meanings one may derive or interpret from the listening of such have no connection with hamsters living or dead. This string of caveats may not be applicable in certain areas of the Maldives or in coastal areas surrounding or adjacent to Oklahoma City. These interviews, though written by Kirk, may not reflect the opinions of Kirk or his assigns or heirs or even of himself. No donations to the VSL foundation are tax deductible and no worthwhile research will be done with such funds if you are impaired enough to send along said, unsolicited. Any mixed drinks you order and consume of the VSL in-house bar may be made partially with turkey gravy and may contain alcohol from various first aid kits liberated in the pursuit of photography by the studio, or not. 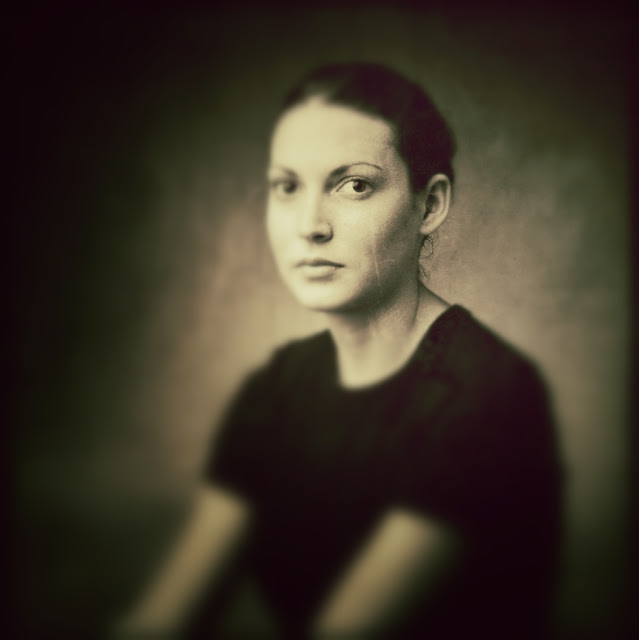 Not an actual frame from the yet unloaded Holga but a simulation of what we hope a representative frame may look like.

Posted by Kirk, Photographer/Writer at 17:48 15 comments: