Just a little teaser... I take temporary possession of an Olympus EP-5, with VF-4 and Leica 25mm tomorrow for testing.... 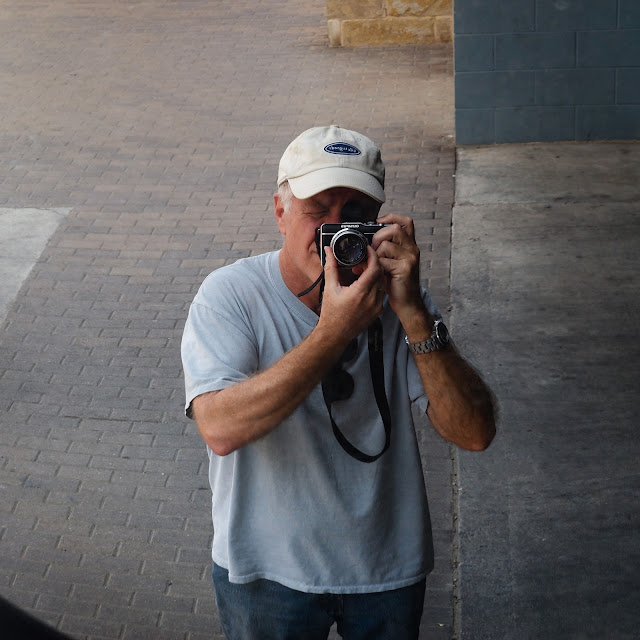 Kirk in a round mirror with an early Pen digital camera....
Posted by Kirk, Photographer/Writer at 18:02 8 comments:

Light withdrawal symptoms. I never knew I'd miss my Fiilex LED light so much... 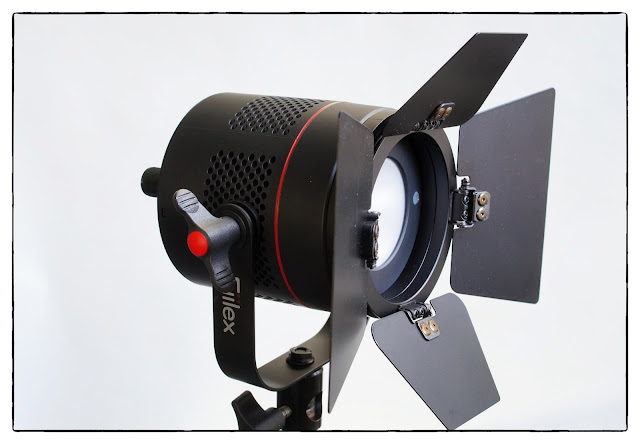 I brought my little, Fiilex P360 LED light along with me to my project in Denver and we used it non-stop. Not just for portrait lighting set ups but for most of the video work as well. In the studio it plays well with mixed lights. By changing color temperatures with the switch on the back it could be balanced to work with the tungsten fluorescent tubes in the Kino-Flo lights and with a twist of the same knob I could match the color temperature to flash or even other LED panels. (Our studio ran mostly on Kino Flo fluorescent fixtures for video but they did have a selection of LitePanels LED fixtures as well). While the Fiilex P360 isn't much bigger than a can of Del Monte pineapple rings it kicks out an appreciable amount of light and the barndoors make it very controllable.

As you can see from the front shot, above, the actual light source (large, surface mount type LEDS) is a very small two and a half inches in diameter and it is one of the first LED lights I've used that can give you a harder light. An LED light that can carve out sharp shadows.

I used it mostly as a background light. I'd use it directly into a seamless background with the barndoors out of the way and it would give me a nice, soft edged circle of light that was perfect for backgrounds. Sometimes we'd use it with the barndoors closed down to about the width of my finger to create diagonal slash lights across the background. Since we were working with Kino-Flos the power with the Fiilex on the background was a pretty even match. We could crank it up a bit or down a lot to emphasize of de-emphasize the overall effect.

Now, saying that we used it as a back light is not be be construed as minimizing its potential. The backlight is the second most important component of most of my portrait lighting set ups. And I'd say most portraits that don't work well from a lighting point of view are sabotaged by inept backlighting. Having a very flexible instrument which can be dimmed and quickly color matched is a critical times saver in any set up.

The Fiilex units are much more expensive than the Fotodiox AS312 panels I've been using and recommending but there are two factors that make it worth the cost to me. The first is it's ability to create a real "hard light" effect in an image. The second is the really tight color rendering of this new generation of LEDs. The match to midday daylight at one end of the rheostat is just about perfect while the match to tungsten fixtures is perfect. The unit comes with an A/C adapter but it's set up to work with most professional 12V video batteries on the market. With a big Anton Bauer battery this light can run for several hours before sucking down the last tasty sips of power.

Now that I'm working more in a hybrid mode where flash is less and less essential I am entertaining the idea of adding two more of the P360's to my light inventory and leaving the flashes at home for just about every situation except where I need the power of the flashes to overpower the sun in shooting situations.

If this is the face of a new lighting paradigm then count me on board. Small, accurate, flexible and well designed. Just the way I like my lights. 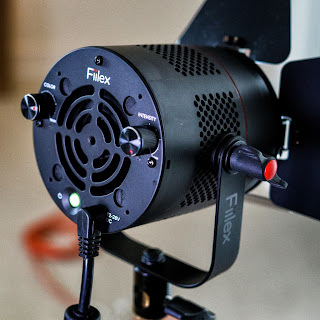 So, why do I say I'm having Light Withdrawal Symptoms? Well, I took the little guy along with me to Denver and the folks there are shipping all my lights and stands and modifiers back to me via UPS Ground. That means I probably won't see the Fiilex until Friday of this week. And now that I've played with it for ten hours a day, three days it a row, I can't imagine a shooting situation where I would not want this fixture in my case standing by to do a quick fill or throw a slash of well controlled light into a dark corner. A working week seems so long.... 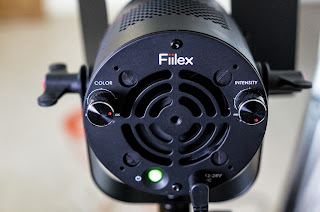 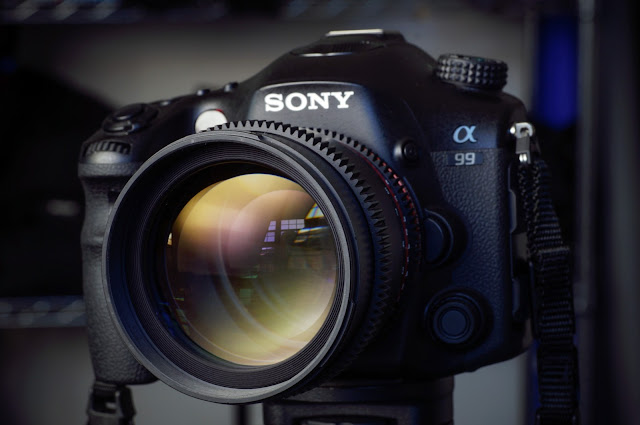 As I was designing lighting set ups I found myself being more surgical and more interested in pools of light with the Fiilex P360. I found myself working closer with the lights and getting stuff I couldn't get with bigger, softer panels. It was a nice change. Not every scene needs a softbox or an umbrella. Knowing what NOT to use is as important as knowing what to use.

Finally, the continuous lights don't put out as much total light as the short bursts of flashes do. That makes faster and better corrected lenses a nice and comfortable companion for continuous lighting. The unit above is my all time, continuous light portrait favorite. It's the Sony a99 and the Rokinon 85mm 1.5 Cine lens. It's pretty sharp in the middle at f2 and the a99 lets me punch in and check focus at 8x or bigger before I start shooting. It's nice to see that kind of instant, almost 100%, focus confirmation before you start committing the time and resources to a shot.

Posted by Kirk, Photographer/Writer at 13:00 4 comments: