This is an art installation. This is a billboard. This is a blog about wall painting and graffiti. And a tale of two lenses. 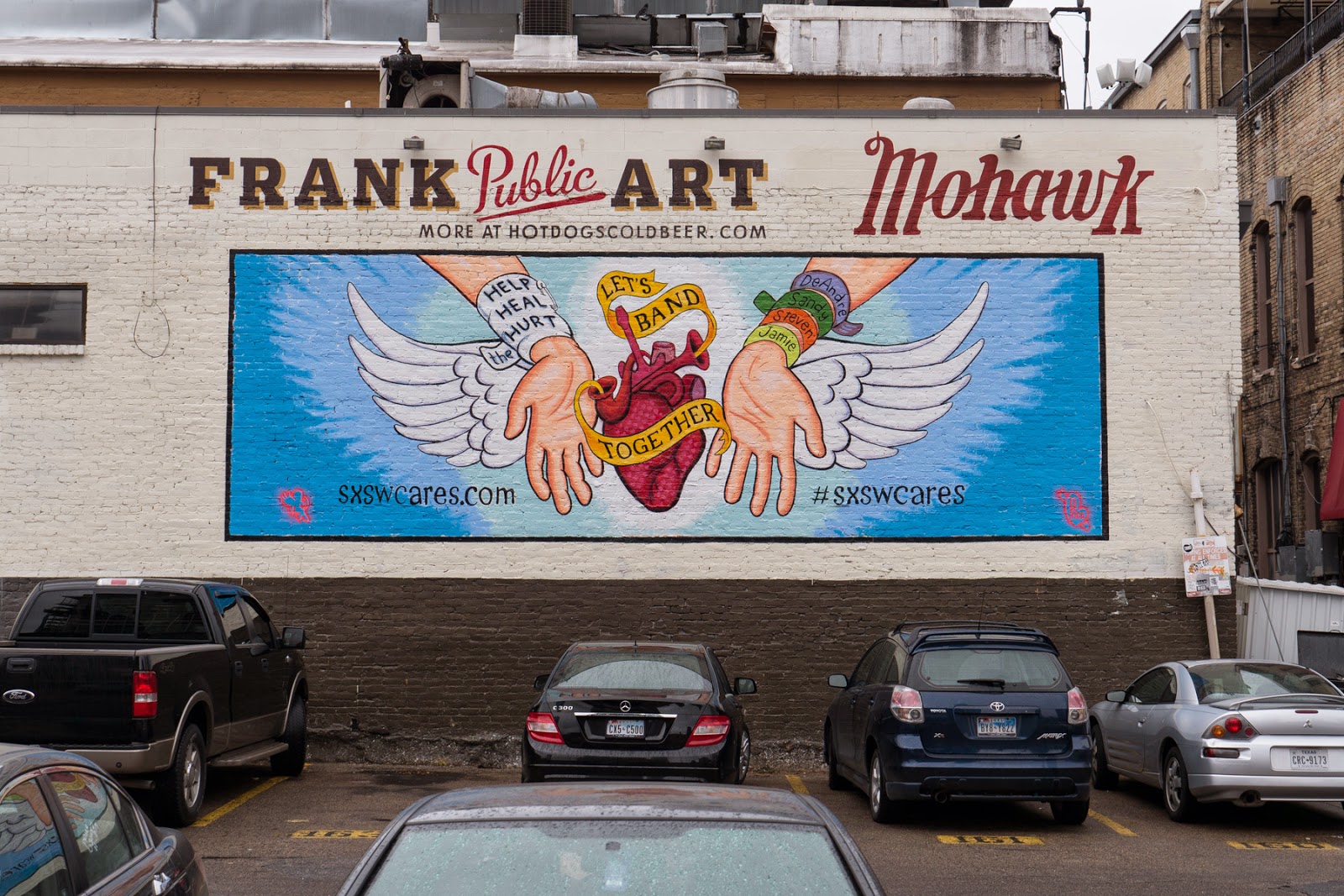 One of the areas in which I felt I had shorted the Panasonic system and one reason I kept shooting with the big Sonys was my paucity of wide angles for the smaller cameras. I bought an Olympus 12-50mm and while it was good it wasn't great. When I thought about fleshing out the system my real intention was just to get a 35-100mm f2.8 to replace my long, fast Sony zoom and then be done with the whole exercise. But with business being brisk again and with the opportunity to divest more of the bigger system I figured I'd just swing a bit harder and get the double dose, the 12-35mm f2.8 and the 35-100mm f2.8 Panasonic X lenses. Now I don't use wide angles very often. I'm not really an architectural photographer and there's very little I like about my own capability to shoot wide. But at least six or seven times a year I need something that goes to the equivalent of 24mm (as measured on a full frame camera). In fact, I have two assignments coming up near the end of the month that may both, potentially, need some wide angle love so----

I walked around in a cold, breezy rain storm on Sunday just to see how the lens worked. I shot it wide open to make sure I liked the performance but as you can see in the image above and the one just below my brain takes control of the zoom ring and tries to get it as close to the 50mm (eq.) area in which I am obviously most comfortable. I'll say this from my tests: The lens is wide angle proficient and normal angle excellent. Hmmm. 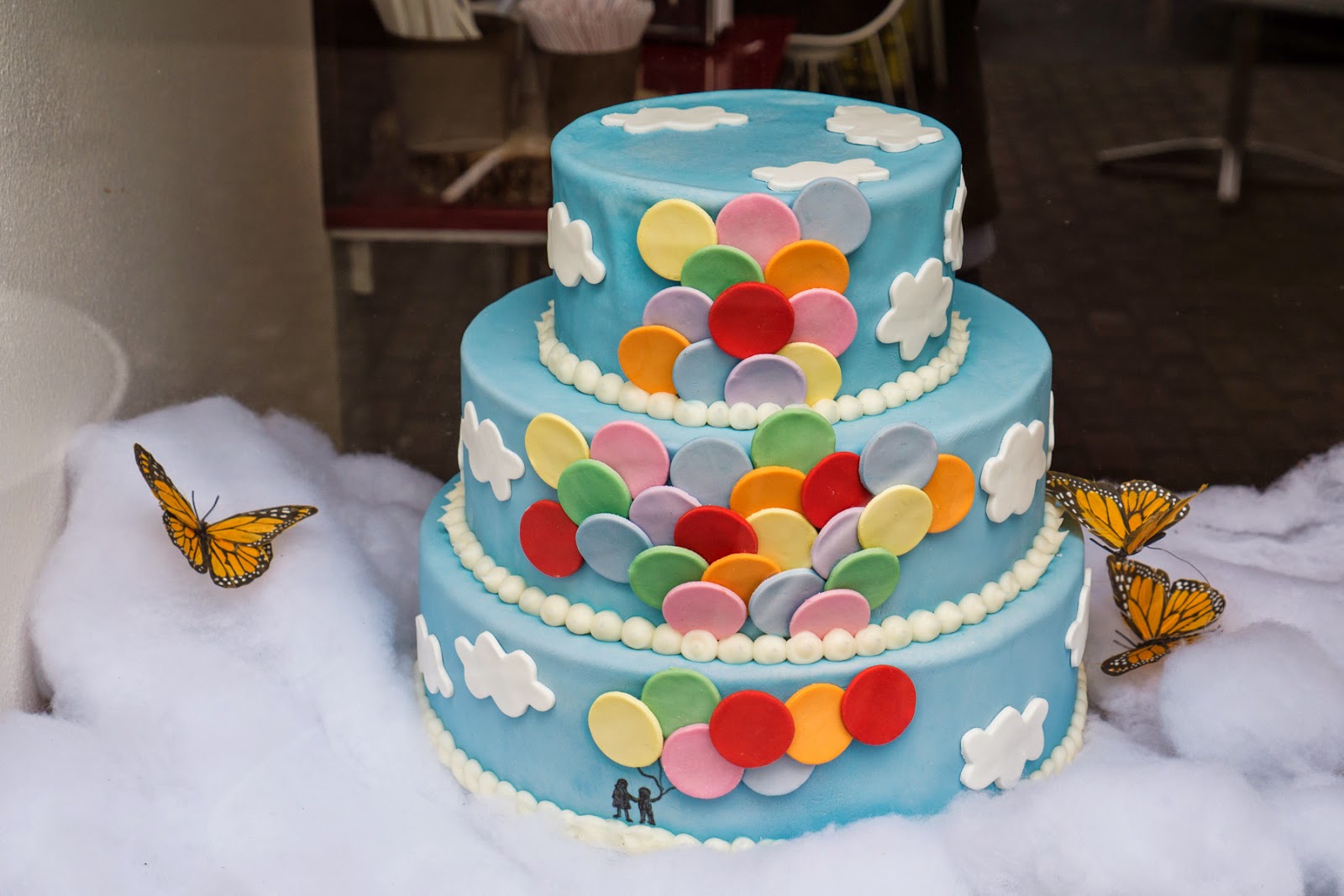 Interesting to me that I could have a new lens in the $1200 price range land in the camera bag but have it take far less priority in my scheme of shooting than a lens that landed only a few days later, the Sigma 60mm f2.8 dn. While I am happy with the work-like countenance of the 12-35mm with its promise of high performance and its swaggering Mega OIS image stabilization I have to admit that I find the $230 Sigma lens a lot more emotionally compelling. Maybe it's the narrow confines of the angle of view and maybe it's the need for more careful handling that makes it a better emotional investment for me. I just don't know. 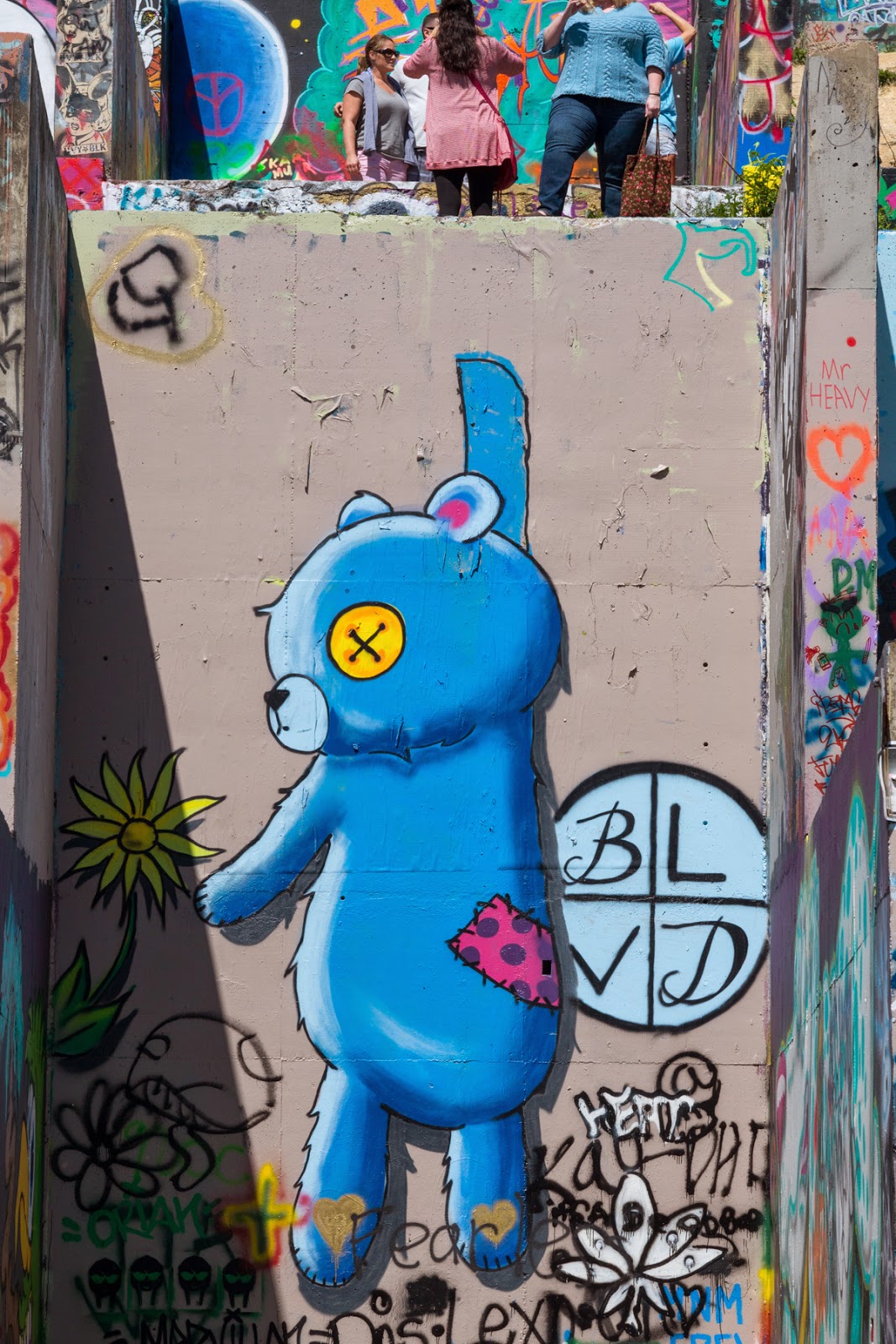 But when Studio Dog and I put in our mandatory four hour work day and pushed back from our respective desk and fluffy mat we were ready to grab a camera and go for quality walk. I looked at the two lenses on the desk and, without hesitation, whisked the 12-35mm Panasonic right into the file cabinet drawer marked, "Proficient Gear," grabbed the Sigma 60mm, and a GH3 body, and a leash and got into the car. We ended up downtown at the Graffiti Park, just west of Lamar Blvd. I was eager to see what was new since my last visit and Studio Dog was eager to see if she could disrupt my "professional" camera hold by tugging at the leash in sporadic and unexpected intervals.... 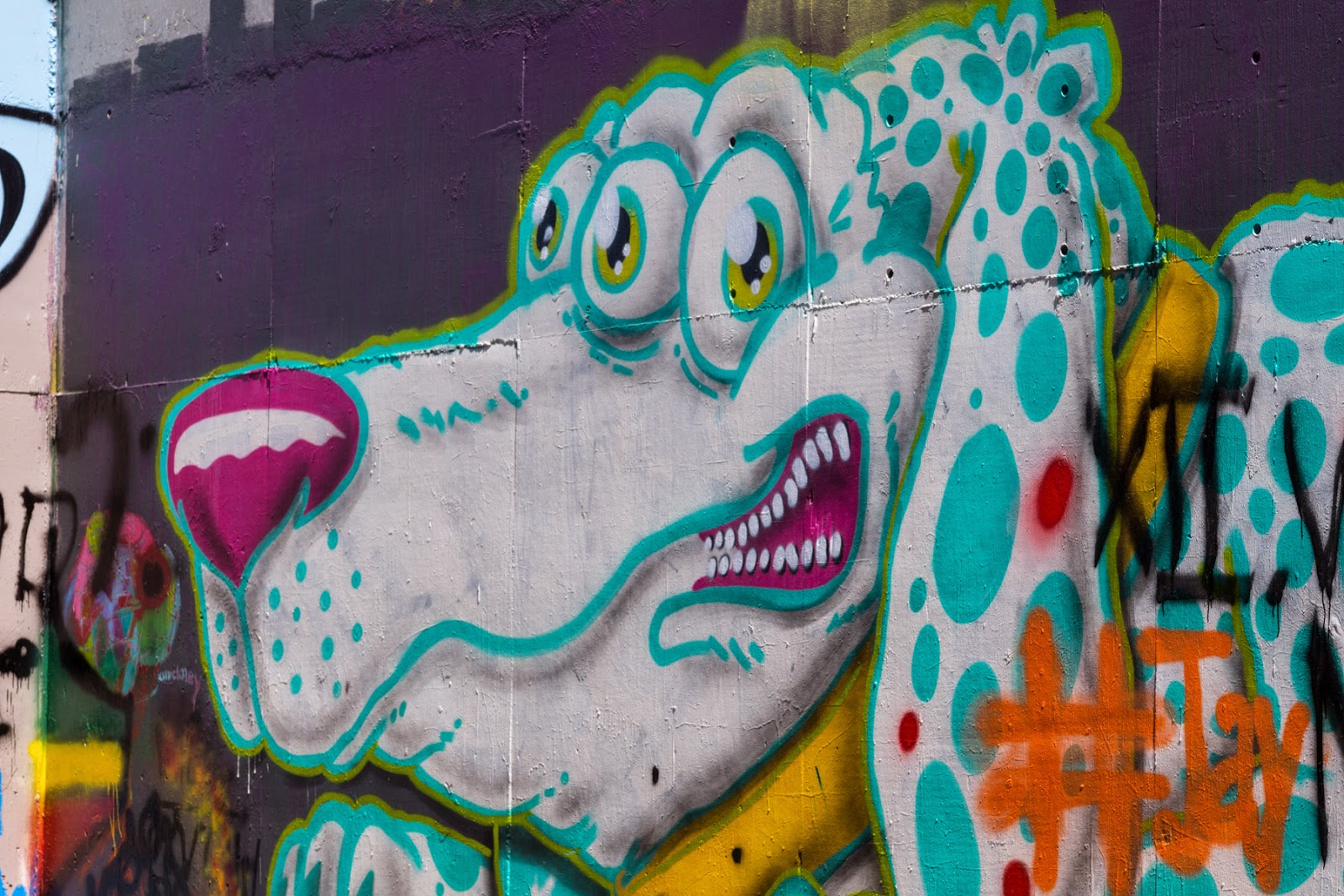 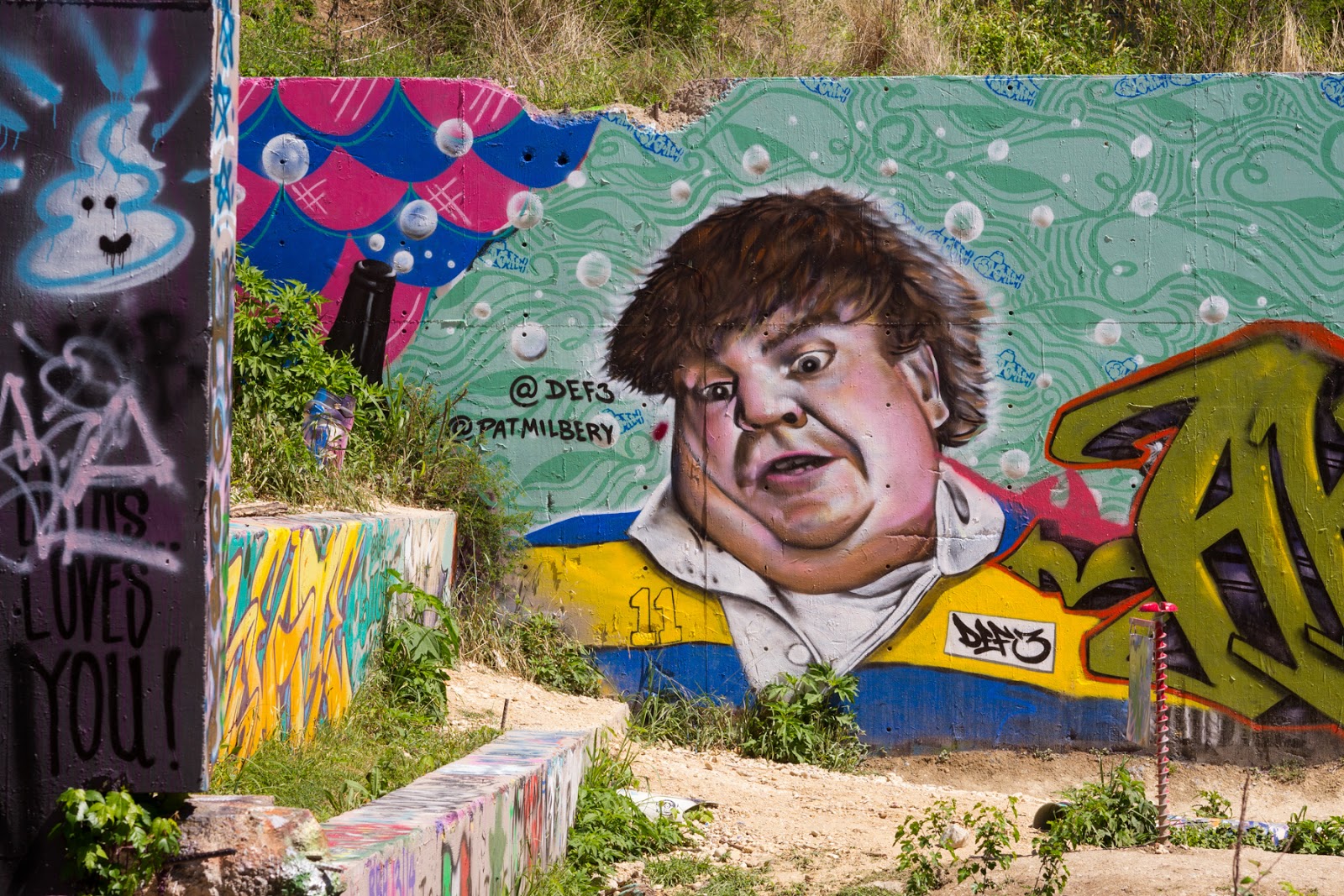 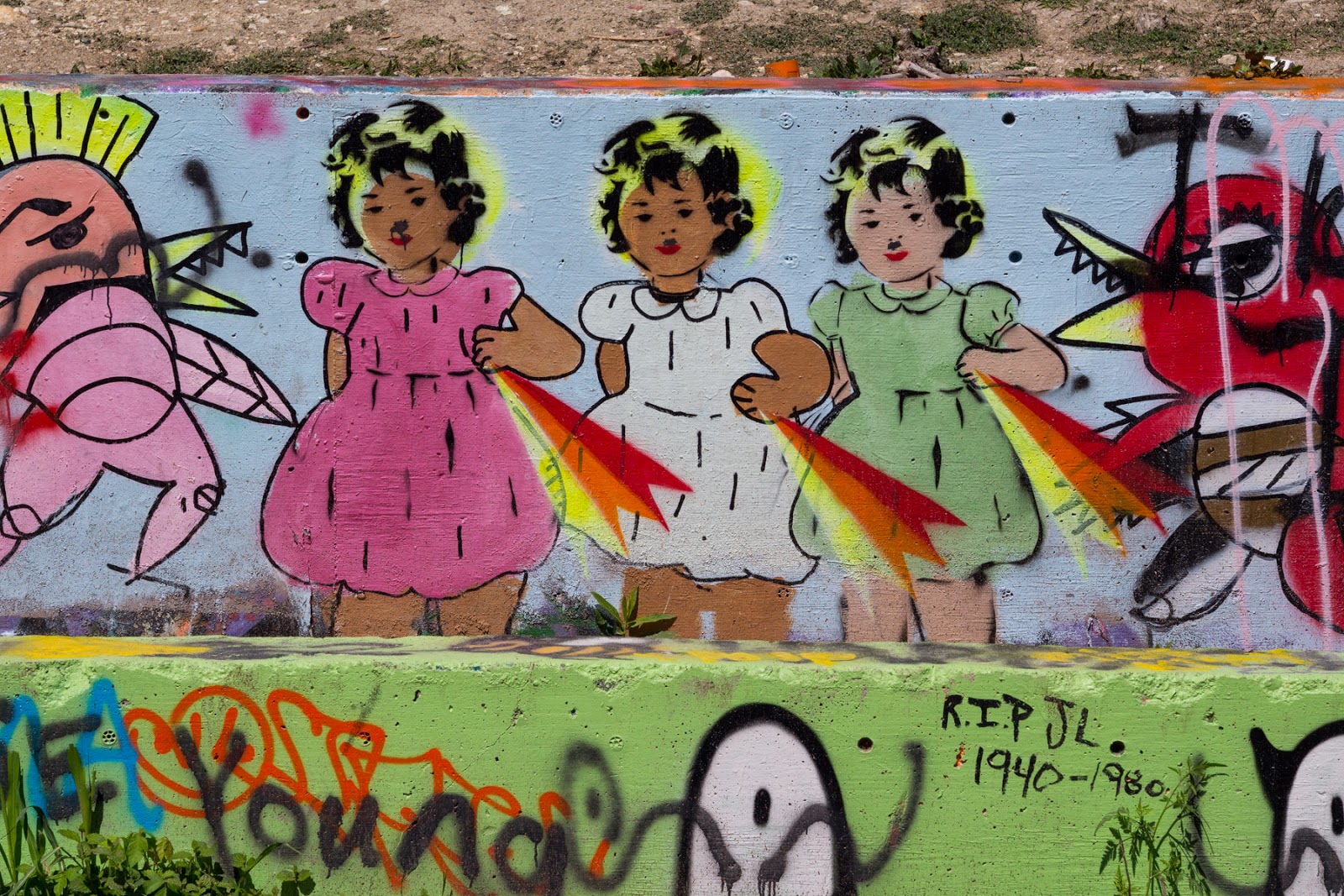 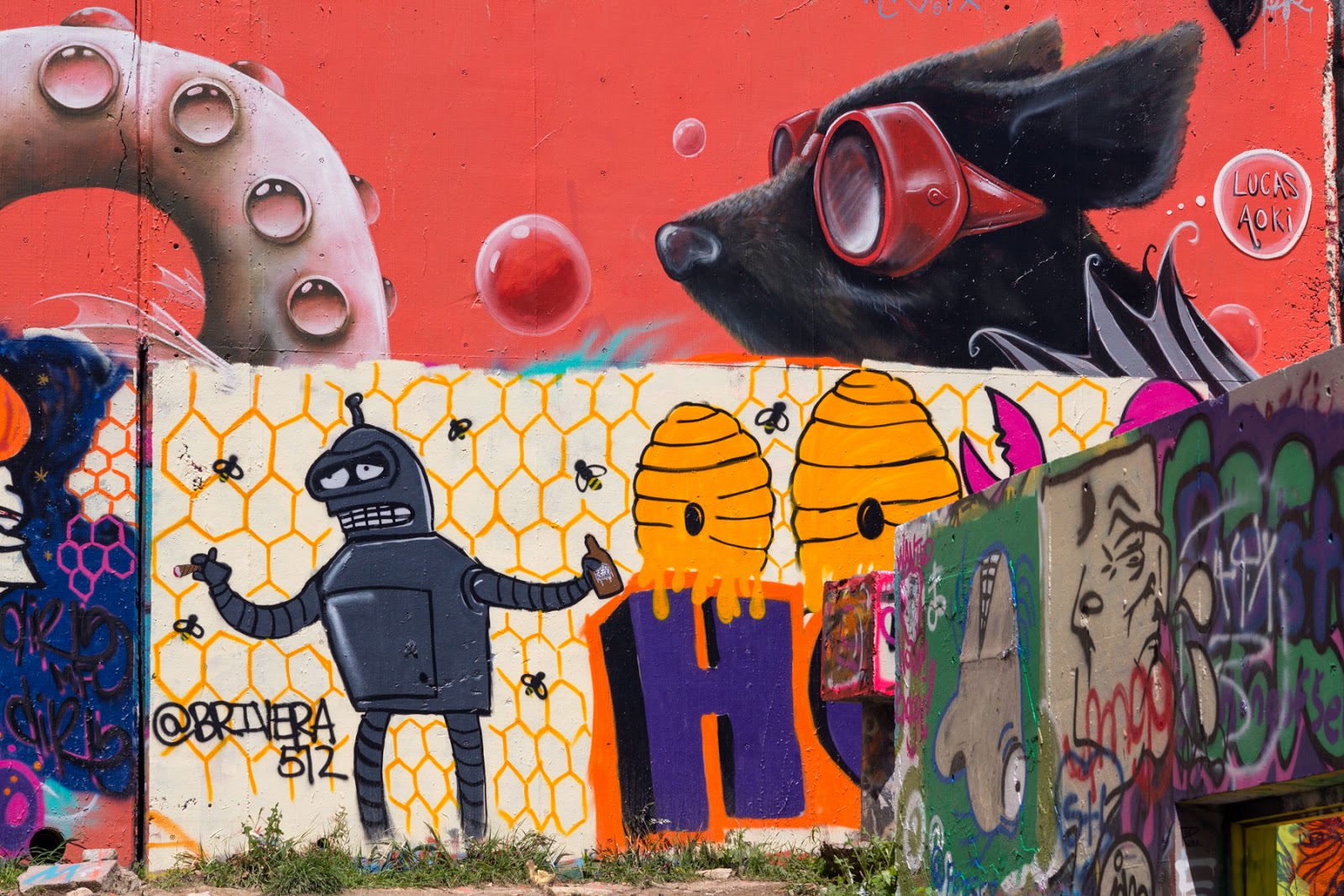 The image above is one of Studio Dog's favorites. She barked at it with a mix of appreciation and apprehension. After all, it is a much bigger dog and has the advantage of wearing goggles... 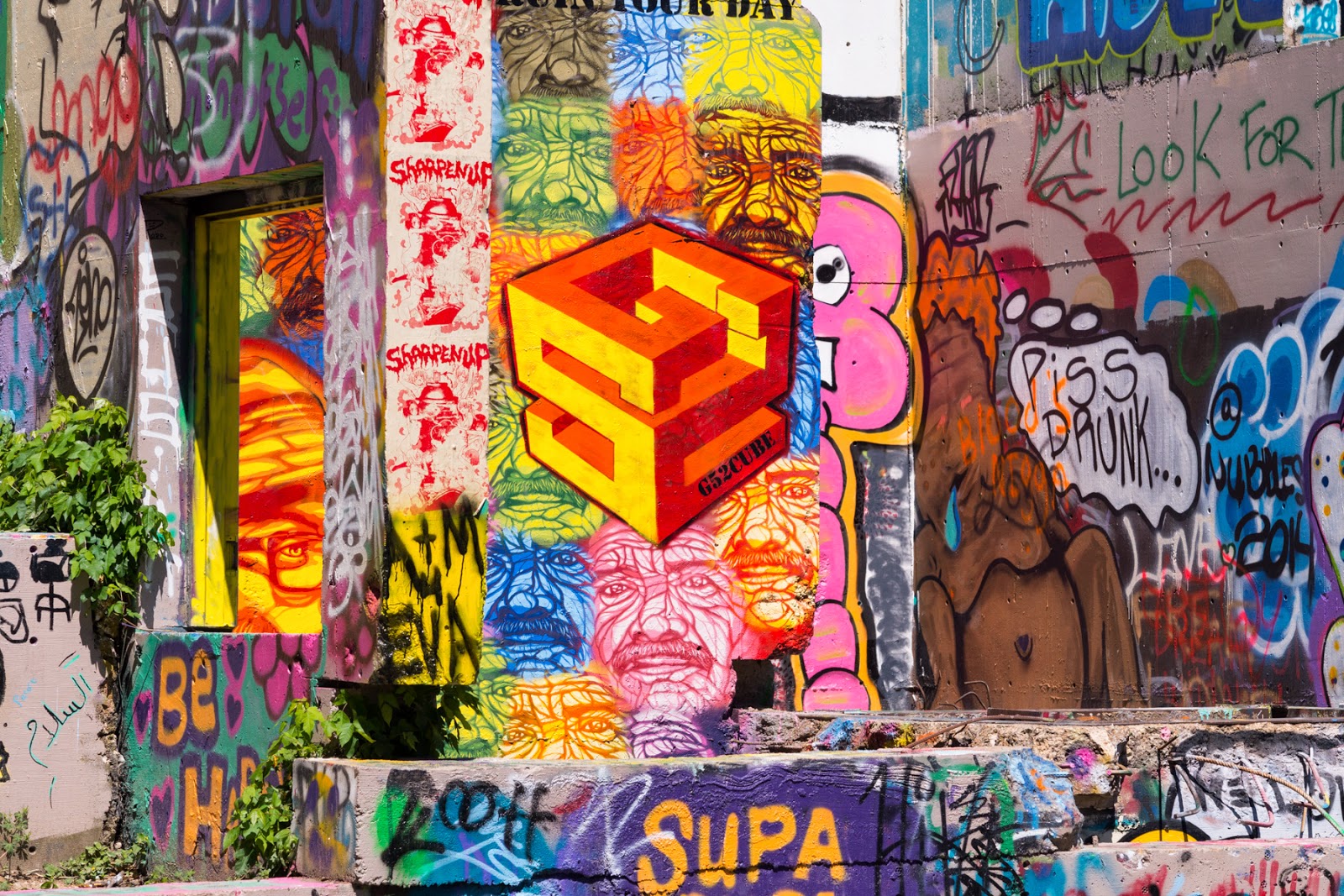 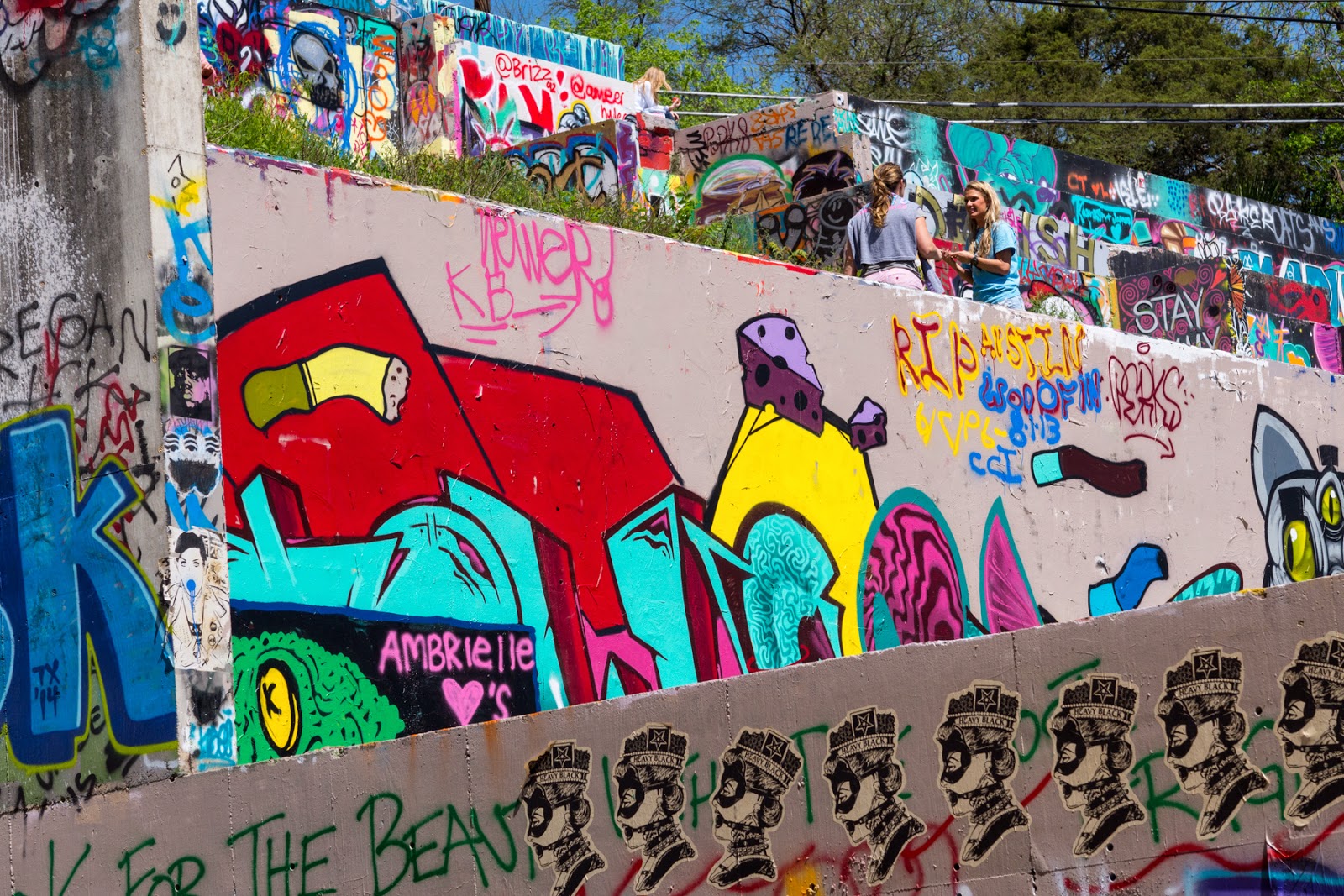 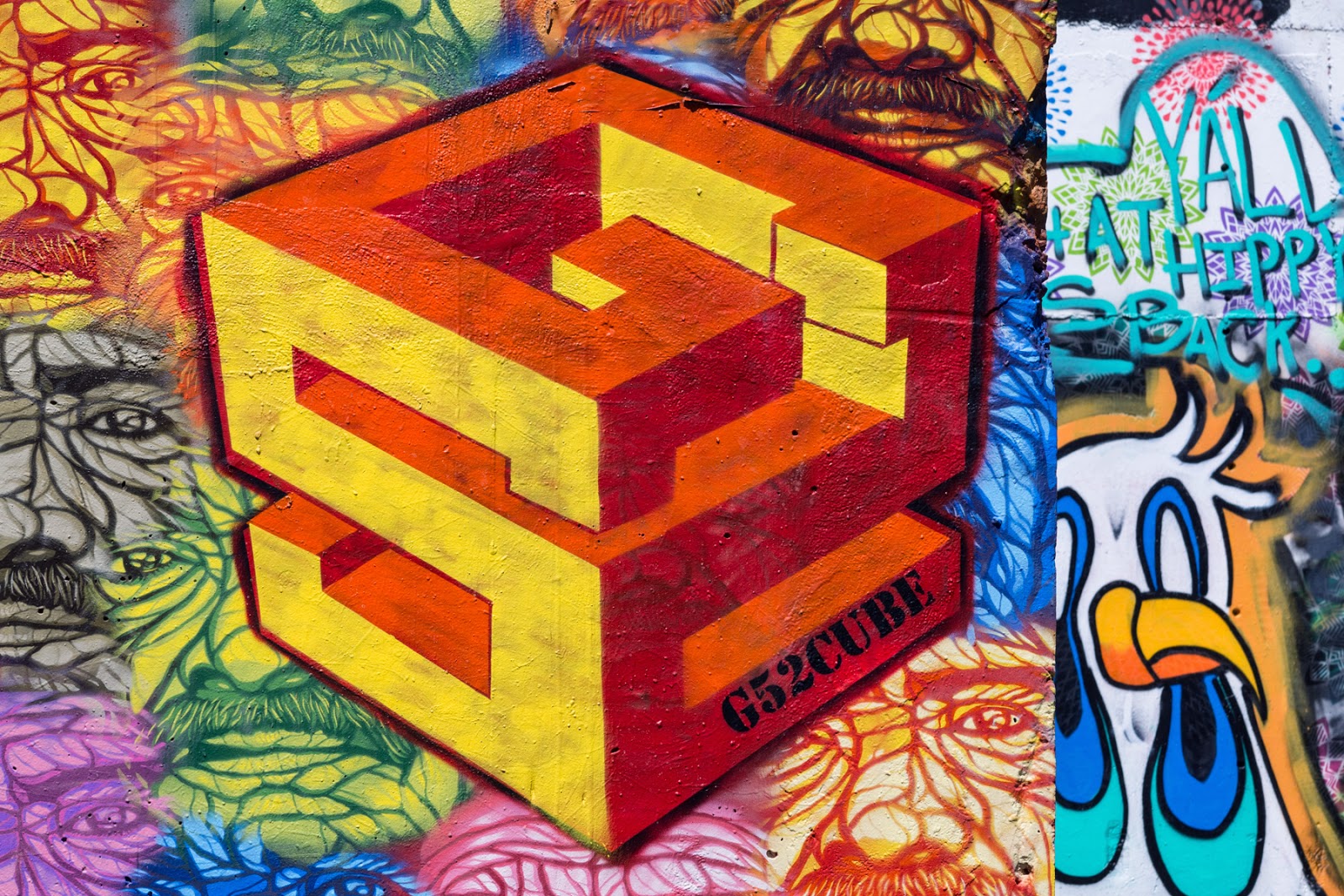 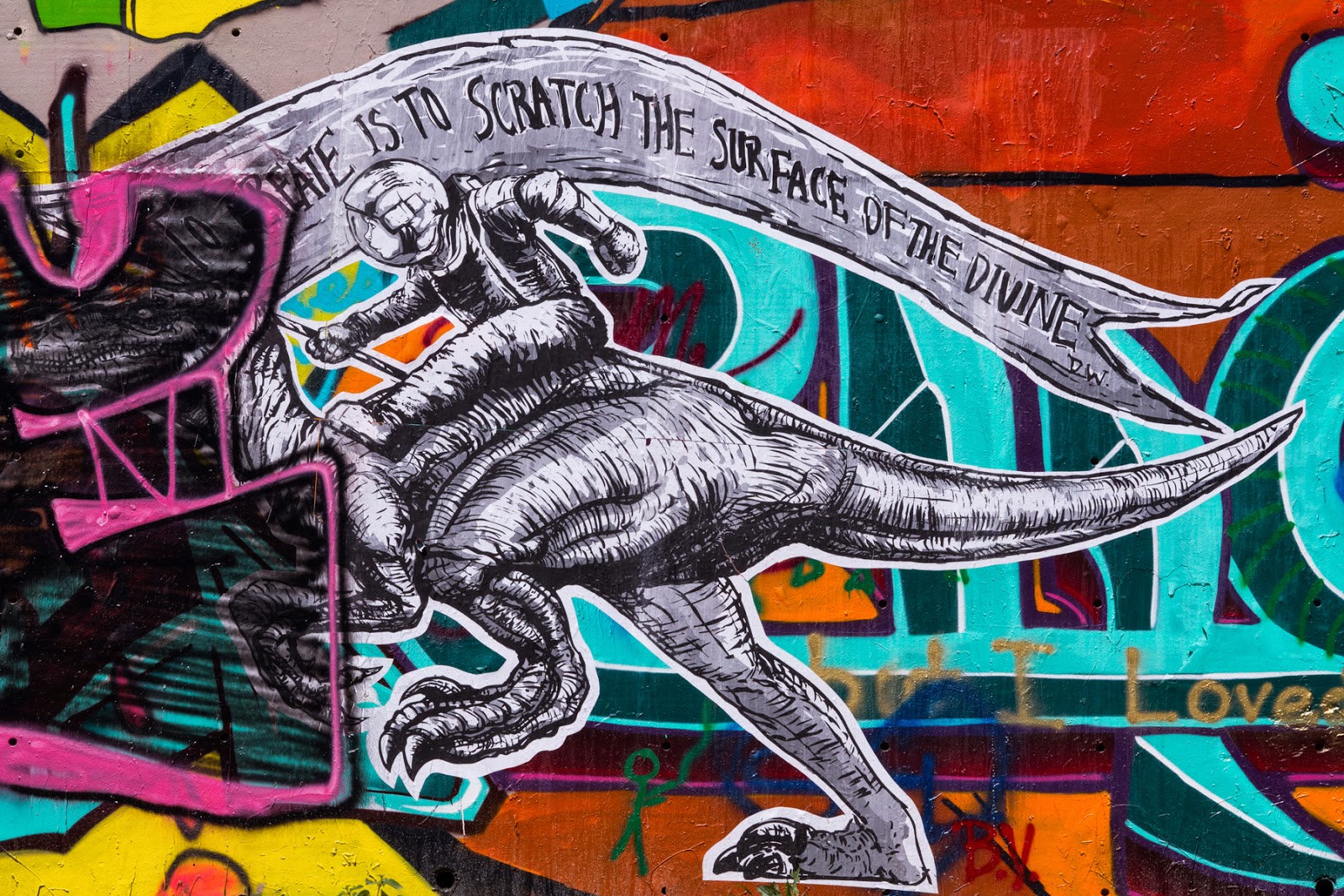 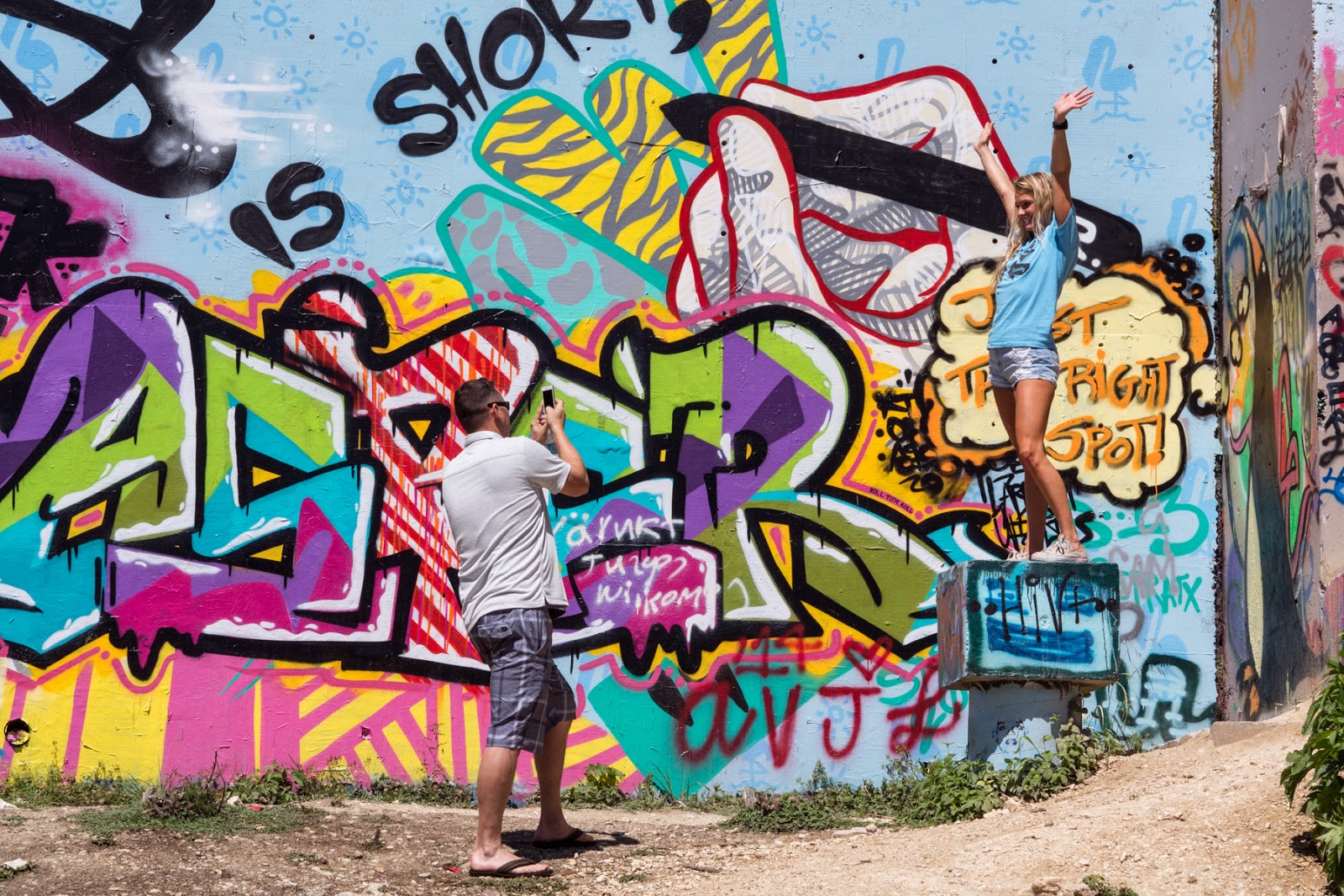 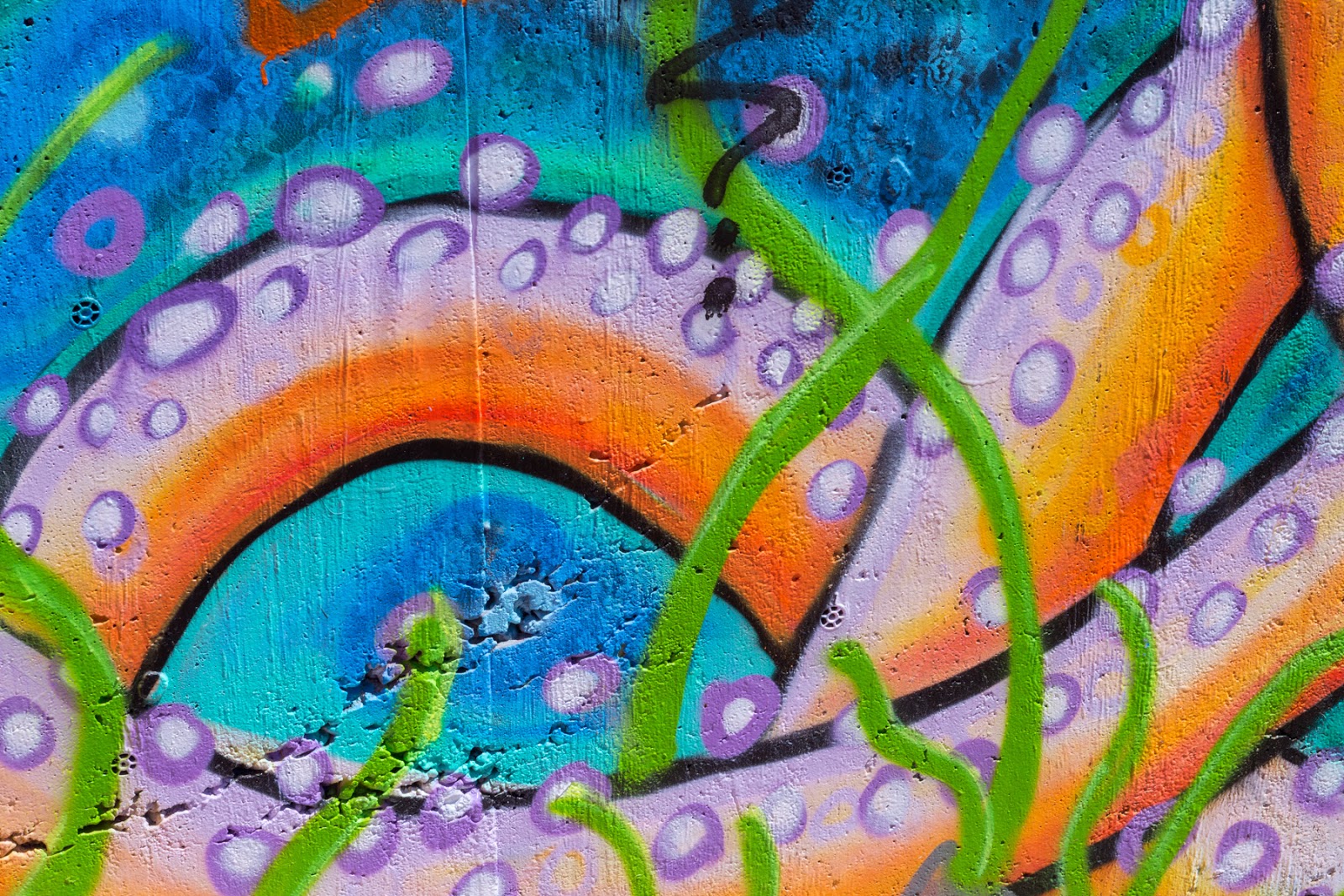 Part Two: An Unguided display of someone's art installation. How do I know it's an art installation? Was it my short career teaching at the University of Texas at Austin College of Fine Arts? Was it all of the art history classes I sat through (wide awake)? Was it a 25 year career in the arts? My advisory position for a local college arts program? Naw. Look at the pictures below and you'll understand exactly how I knew that what looks like footwear is really ART. 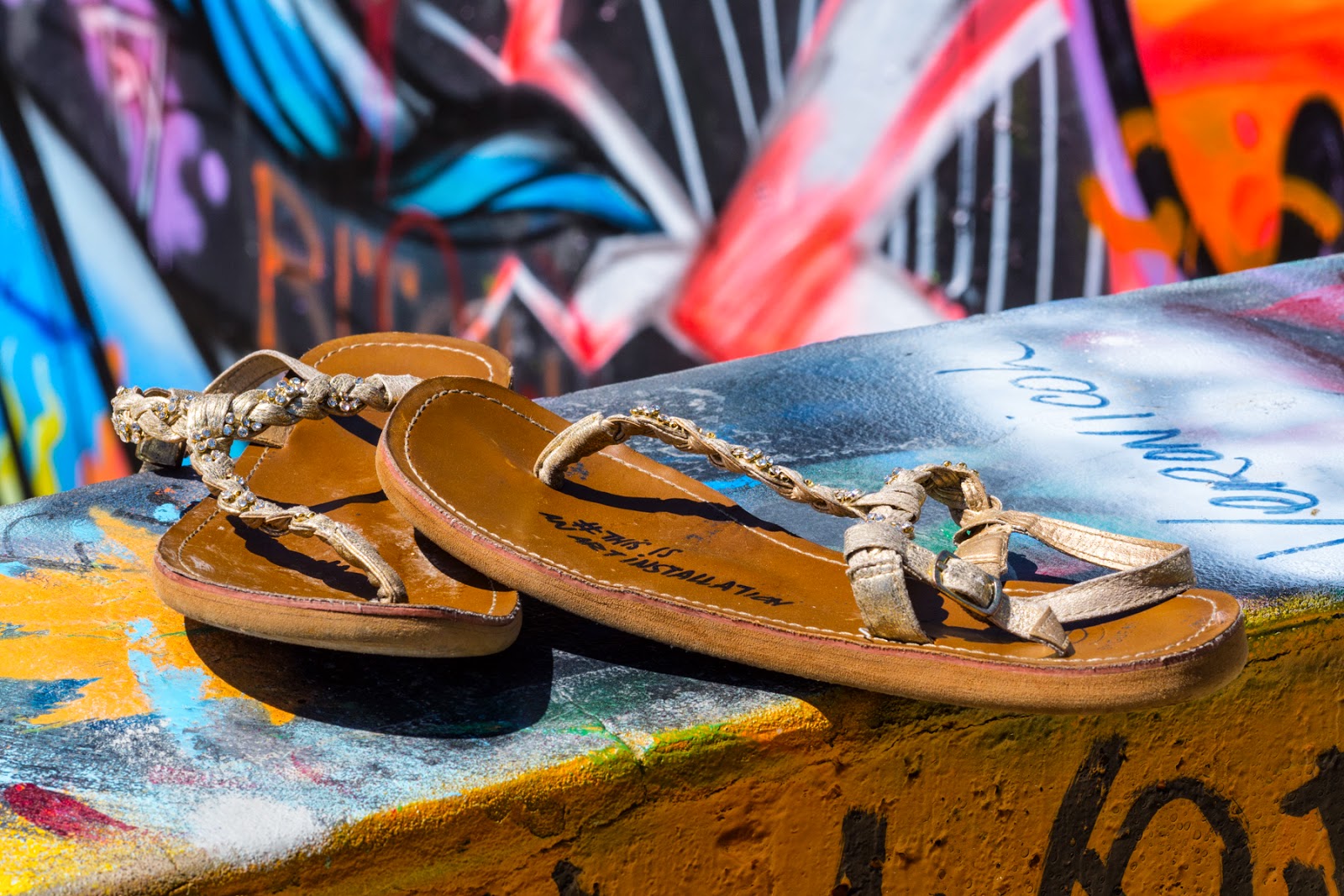 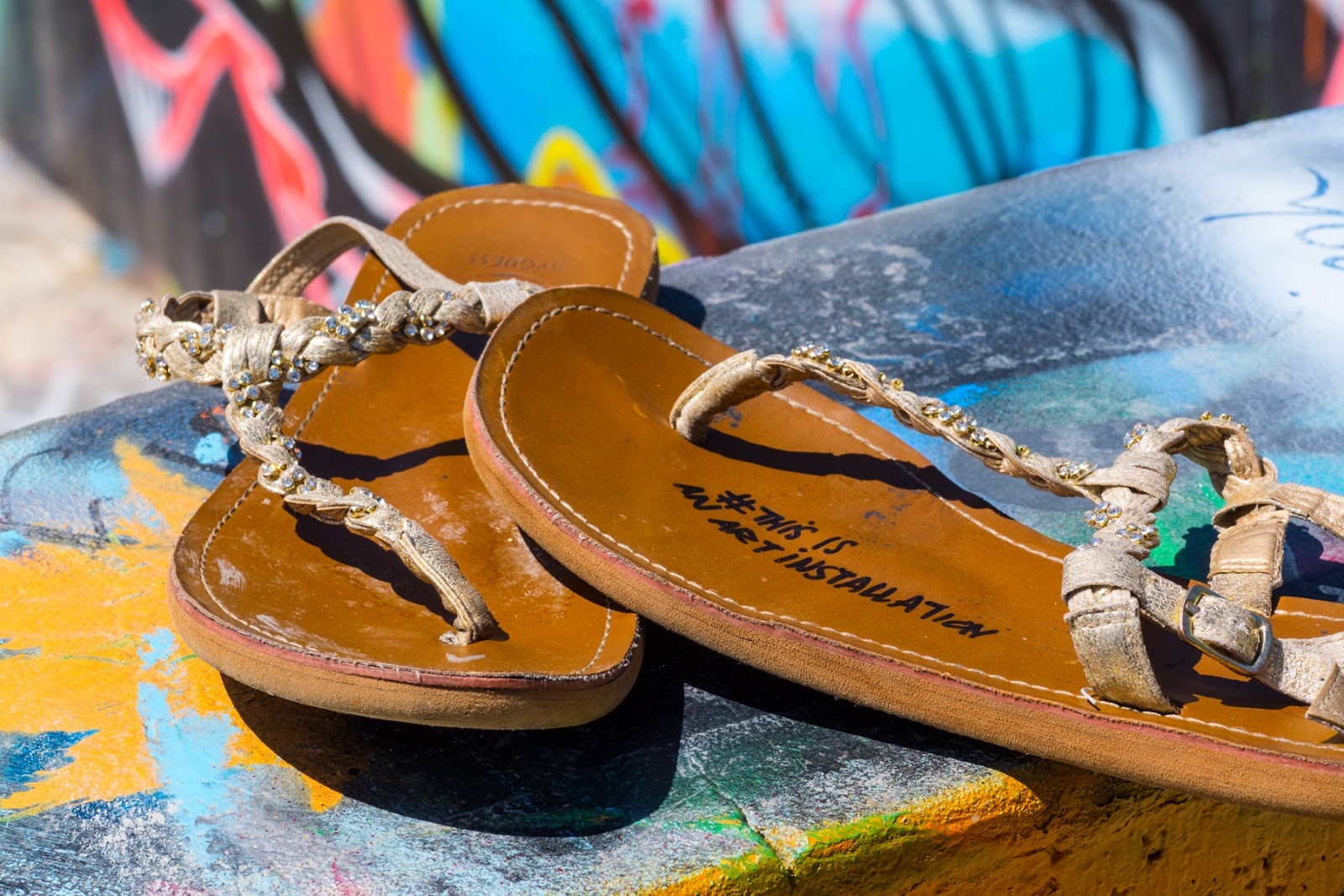 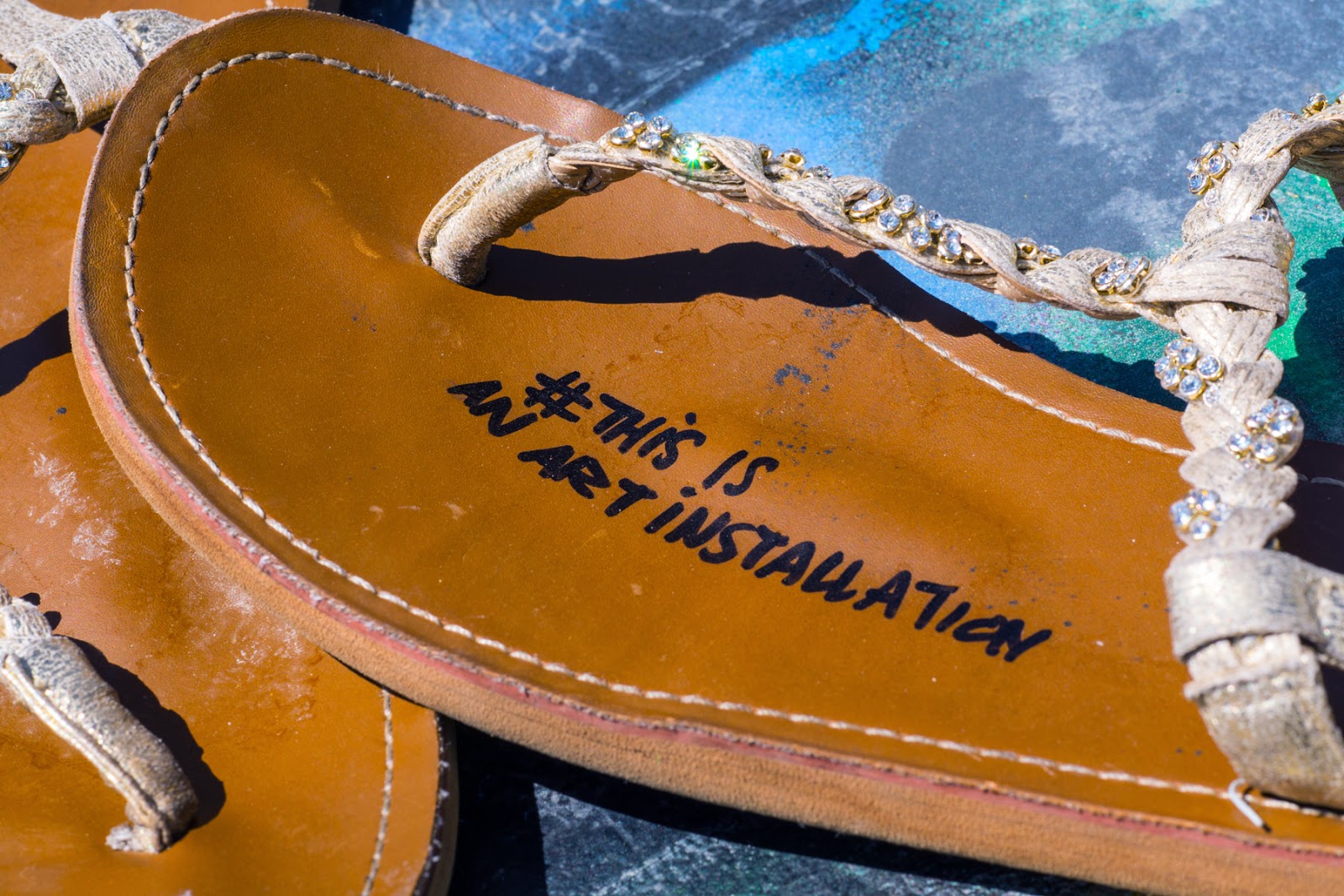 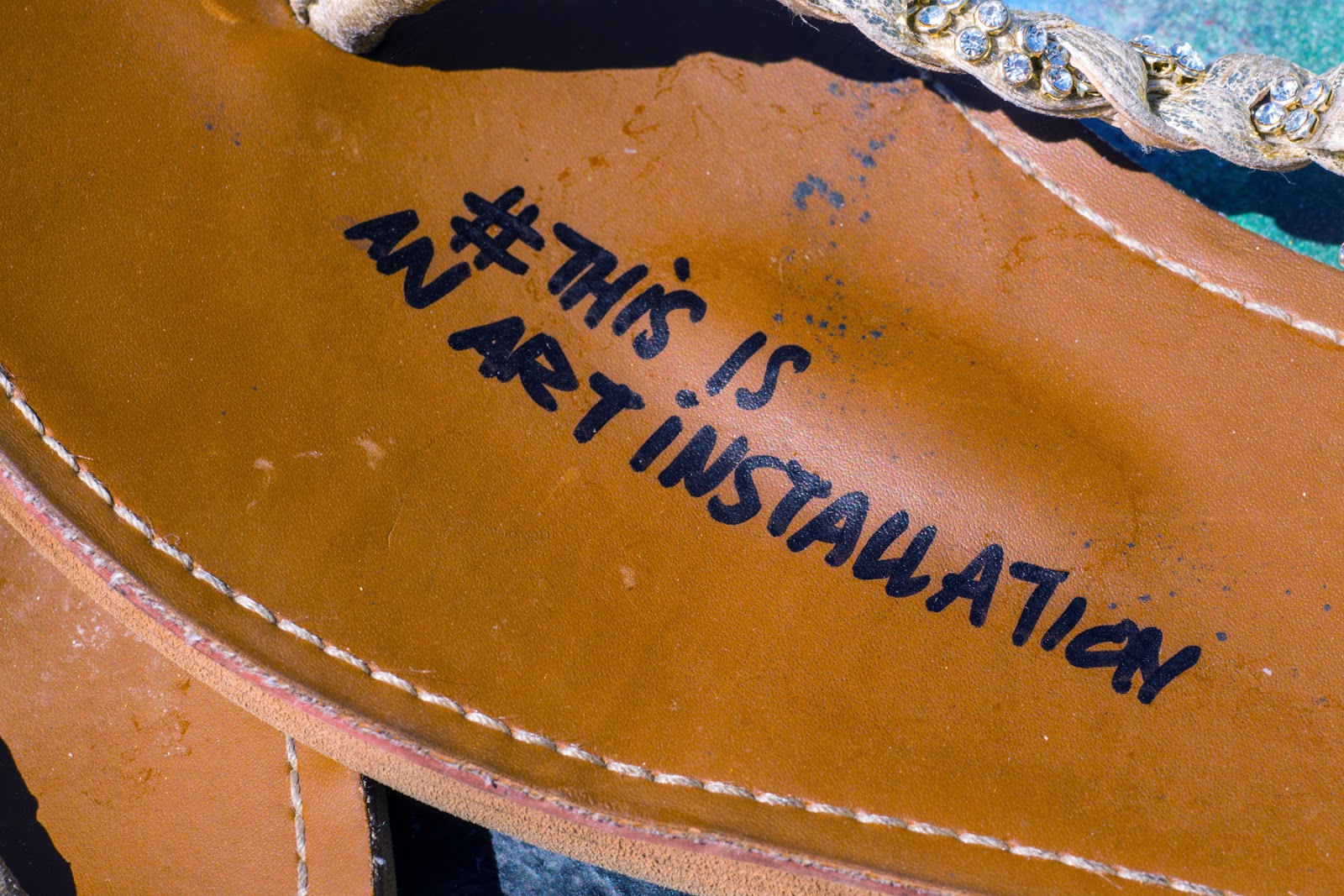 I have moved on from the examination of art and am now working to decipher just what is compelling and "sexy" about posing for photographs in front of disconnected graffiti... I am not making much headway.

Posted by Kirk, Photographer/Writer at 15:47 4 comments:

Run Toward the Snarling Dog. 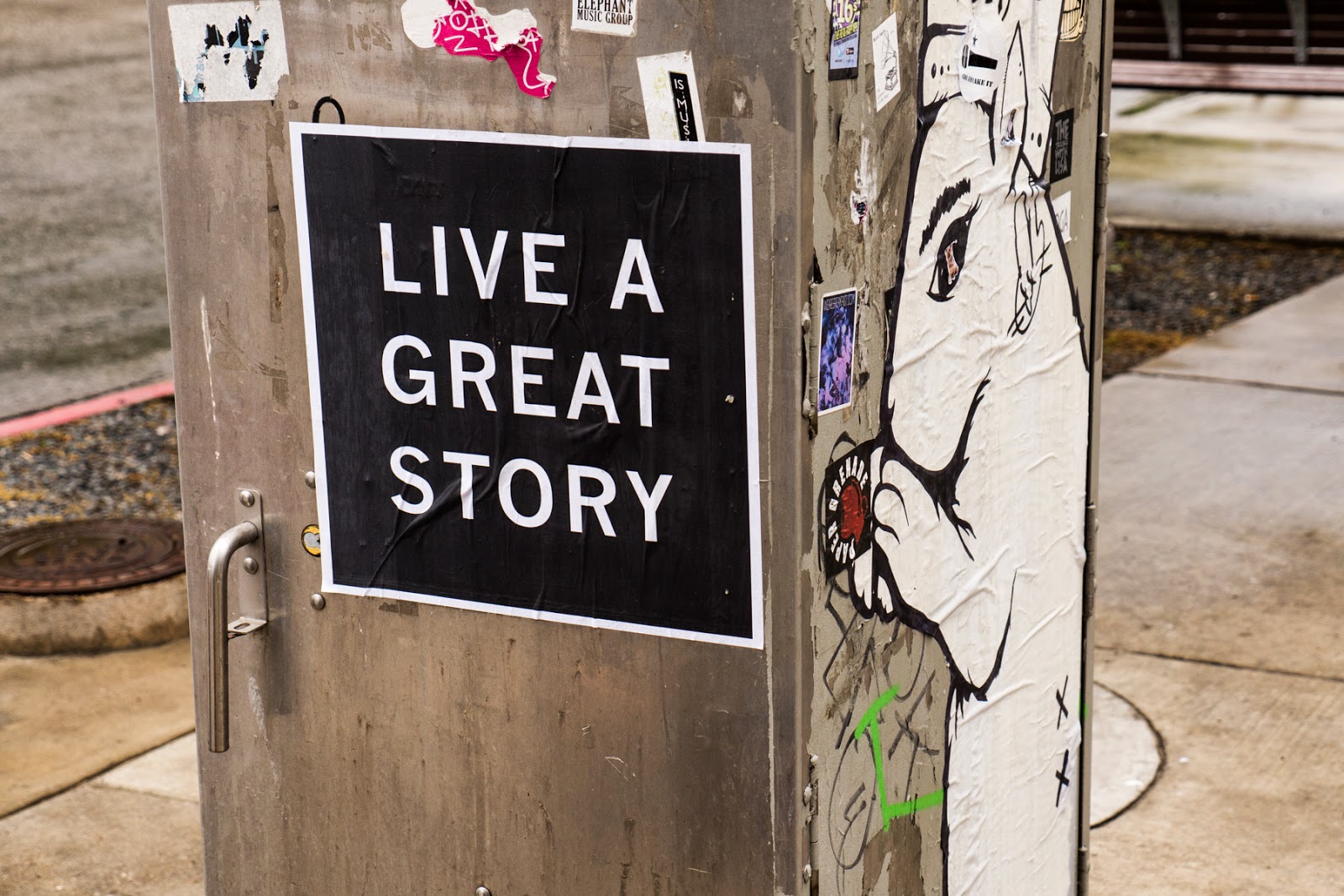 Two philosophical ideas for today. The first is about dealing with fear.  The fear of getting started. The fear of failure. The fear of not knowing enough of whatever it is you want to do. I read a story a long time ago about the Dalai Lama, the spiritual leader of Tibetan Buddhism. As a small boy he lived outside his own country.  He would often have to walk with his retainers and entourage past an enormous house guarded by huge, fierce dogs. Most days the dogs were contained behind high walls or fences and the Dalai Lama and his people were safe from attack.

One morning the dogs were loose. They saw the Dalai Lama's group and starting snarling and making belligerent moves. Everyone around the young boy was very frightened, turned and started to run away from the dogs (and running from dogs is probably the very best way to get them to chase you...) but the Dalai Lama turned and ran toward the snarling dogs. He charged at them. And they stopped.
And the entourage regrouped and walked on.

Is it a true story? Does it matter? The takeaway thought is to confront your fears directly. To run toward the snarling dogs. Being in control, or even just having the conceit of being in control gives you power. Every photographer I know wrestles with doubt, anxiety and fear. Do I really know how to create a certain look? Do I have a style? Can I sell my style? Why am I afraid to show my work to potential clients? What if everyone rejects me? Where is the market going? How can I change gears? How can I get part of a new market? What if I am revealed to be a fake?

Most of us try to fortify ourselves (our self confidence) by delving as deeply as we can into the technical underpinnings of our crafts. We learn all 5,000 secret actions in Photoshop or we watch 10,000 hours of workshops on the web to see how everyone else in the world might light a simple image. If we are into video we study every web site and pull apart every movie to try and understand the entirety of the undertaking before we even lift a camera and engage the start button.

We do this because we are afraid to fail. We are convinced that we will get only one chance to enter the field and engage. And because we feel that we have only one chance we want to tip the odds overwhelmingly in our own favor. It's like a man who's been told he will be on Jeopardy (a TV show that tests your ability to memorize facts, names, events, etc.) in five years. For the next five years the man does nothing but study everything he can lay his hands only to find out that he was so over prepared that he had become paralyzed. Unable to answer.  Or that the show had been cancelled...
Or that five years of his life had passed him by and that cost was greater than any reward that winning the show might have gained him...

I watched myself do this with photography. Especially in the transition years between film and digital and I remember how much time I lost and how much useless information I squirreled away. And then the information (not necessarily immutable facts) hit the sell by date and we felt like we needed to start over again with new information. In crafts with a large technical component it's so easy to get stuck in an information acquisition loop and never get out, never actually start producing. It's part of the reason we're always buying something new...

I vowed not to do this with video. I jumped straight in. I'd done my learning curve on the aesthetics and mechanics of telling stories with motion back in the 1980's and 1990's as a creative director and copywriter, and also as a DP on projects for several directors. I was stern with myself this time around. I don't need to know any more than how to tell the story, how to turn on the lights and how to push the "start" button on the camera. All the other stuff is just more stuff. It's not the core of the story telling craft. And none of it is as hard as we believe it is.

My fear was some mythical learning curve. What better way to neutralize this fear than to pick up your camera and your tripod and your microphone and get busy telling your story. You work, you learn. You work, you grow. I started warming up with my own projects. Stuff I do just for me. And I learn good techniques by not being afraid to fail on my own stuff. And everything I learn goes into making client projects as good as they can be. I can sit and "learn" or I can walk out the door with fresh batteries and a fresh mind and look for a fun story to tell. A quick script on a napkin. A montage of visual notes. Something fun to edit together. I get up in the morning and remind myself to run Toward the Snarling Dog!

I always grumble that the world is changing too fast and not for the better. I wish people would put down their cellphones, I wish people would pay attention. There's so much about the world I want to change and all I accomplish by focusing on this angry need to change the world is to become frustrated and upset and push way the good things in the world as well. I think to an extent we all wish some things could be changed. The issue is that everyone feels that different things need to be changed.

I was reading the notes for Stephen Mitchell's wonderfully readable translation of, "Tao the ching" and I came across this passage; this thought:

"Do you want to improve the world?

Wanting to reform the world without discovering one's true self is like trying to cover the world with leather to avoid the pain of walking on stones and thorns. It is much simpler to wear shoes."

It certainly made me pause and reflect. And if I print out the passage and put it up on my wall perhaps I'll spend more time working on my own stuff and a lot less time grousing about the state of the world. Now I need to walk the (small) snarling dog...
Posted by Kirk, Photographer/Writer at 09:28 4 comments: