Did Apple just give their users 10 bit color at the monitor? Is it usable on older systems?

See the type just above? It's from my system profile on my 27 inch Apple iMac. Look down to the
third line. It shows the pixel depth for the monitor to be 32-bit. This is one of the changes that Apple's new system software (10.11.1), El Capitan, delivers. That might mean that we're now getting 10 bit per channel color! I love the idea of it but have no idea yet whether the increased bit depth is only available in Apple programs like Photo and Preview and not PhotoShop, etc., but I'll wait to hear from our more technical and enlightened readers before I stumble into meaningless conjecture and outright Male Answer Syndrome.

Crazy Rain Again in Austin. Two weeks in a row... 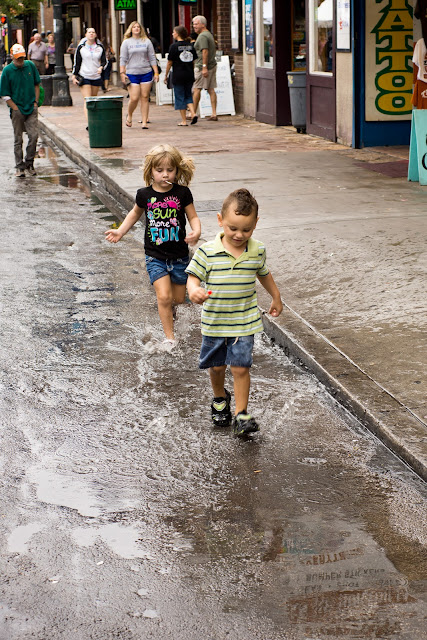 Last weekend the city of Austin (and the race track at Circuit of the Americas = F1 venue) the mysteries of nature dropped about 16 inches of rain over the course of two days. It was a thin and whipping rain that soaked everything. Zillions of smaller rain drops but delivered in awesome quantity. It generated a lot of flooding and shut down the prelims for the Grand Prix on Saturday.

I think most Austinites presumed that this was going to be our one Fall drenching and, par for the course, the rain stopped and the sun came out as the last of our car-centered visitors left for their next engagement. We had a wonderful week of moderate temperatures and light winds.

When I headed for bed last night there was a forecast saying we'd get some rain today but no big panic on the part of weather casters.

Sometime in the early (pre-dawn) hours the rain started falling. By eight a.m. it was falling down a lot. Big, fat, fast, juicy drops. There gutters up on the street looked like white water. The never-ending homebuilding project next door starting sloughing off unprotected topsoil by the ton and diverting it into the storm sewers, and around 9:30 a.m. water started seeping through the low lying East wall of the studio.

I was working at the computer and I turned around to notice a slow moving sheet of water moving out into the room. I really need to get an expert out to check what's happening with the French drain that runs along the wall but I think I already know = 6.5 inches of rain in about three hours, coming in on top of the 12-16 inches that saturated the ground last week.

The vacuum cleaner sucked up the water and I cancelled a coffee appointment. Lightning had precluded any idea of early morning swim practice. But I've been lucky,  I just had a little bit of water on the concrete floor. All over South Austin whole neighborhoods are getting evacuated and the airport was completely shut down for four or five hours this morning. I headed out to Trader Joes to get some stuff for dinner and just in my neighborhood several roads were closed.

Today, in Austin, it's good to have some weatherproof cameras. We've got a few more bands of heavy rain to get through and then the weekend cleans up its act and we get some sunshine and clear skies.

Just in time for Halloween photos. Have fun. Stay dry.


Posted by Kirk, Photographer/Writer at 13:47 6 comments: 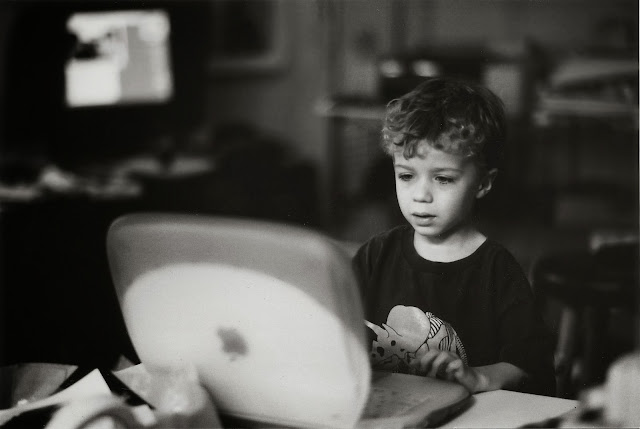 No one at Apple has ever offered, or given, me a computer. They won't even let me cut in line on new release days, and yet I sing their praises whenever the subject of computer appliances arises. Olympus paid me once to be a presenter at a show. I traded long hours of speaking and showing work that I had done with cameras I purchased at retail stores for full price. In direct exchange they traded me a 14-35mm f2.0 lens for my Four Thirds camera system. End of the deal. A one time shot. From that point on I subsided back to being one of the rank and file customers; but I always get a friendly nod from the tech reps with whom I have worked.

I have borrowed gear from our local Nikon rep from time to time. She loans me fun optics because she thinks I might buy one or two if I had the chance to use them. So far I'm winning and I haven't bought any of the esoteric stuff I've tried out. But the last time I borrowed anything was back in 2006 so I'm pretty sure I'm not subconsciously feeling beholden to Nikon because of their ongoing largess.

One time a rep from Leica loaned me a 15mm f2.8 and it was kinda scary because the lens was so frantically expensive. I only used it around the house because I was afraid I might accidentally destroy it out in the wilderness and it was worth more than the car I was driving. Leica didn't get anything out of the loan because there was no such thing as blogs back when this transaction occurred and I didn't even get to brag about using it. Until now.

The same progression holds true for Leaf Systems, Phase One and Mamiya, who all sent me evaluation equipment back when they thought medium format digital equipment might make some headway in the market. I did fair evaluations of their equipment for a magazine that is now defunct, and immediately sent the equipment back to them. I was happy to test the cameras but they may have been less happy with my evaluations.

I have been invited to participate in several junkets from various camera makers while I was shooting with their gear but declined until I got invited to play with the Samsung cameras. I liked the people at the PR agency really well; they are fun and super professional. My problem was always with the cameras. In a way the Samsung cameras and I just have different personalities. It was like having me work on a computer loaded with Microsoft, Windows Eight. Try as I may I just didn't bond with them. The glass was good and some of the sensors were as good as their competitors but the whole mix didn't work for me.

I did a trip to Berlin with Samsung to shoot and write about the Samsung Galaxy NX, but I think all of us (me and the PR company) realized that the social networking leanings of that camera weren't quite in line with my personality -- which is more private and plodding. I was fine shooting the camera but hated the idea of stopping everything to spend time uploading, and social networking, the images.

I continued on but lost my enthusiasm for new product from them because I preferred the cameras I kept buying from other makers and we severed our agreement and went our separate ways. They did send me product  in a  quid pro quo but, for the most part, it didn't work out as either of us planned and all the Samsung cameras have been given away to friends and younger photographers.

I now have a new rule that I won't write about gear at all if there is any financial tie between me and the company that makes it or markets it. That means no pre-release trips to shoot a new product line in a nice locale. No acceptance of gift cameras or lenses with the idea that I will write about them and say nice things. In fact, you may have noticed that I've stopped reviewing new products in the month or so after they come out if I haven't wanted them badly enough to go to the store and buy them by giving my personal credit card a hard workout.

The problem is that any special treatment given to a reviewer immediately gives the appearance of preferential treatment that probably goes in both directions. Added to that is the fact that my sense of ethics winds me up so much that I become too heavy handed in my reviews and actually step over the line in the opposite direction by becoming too critical of the gear. Marking it down for insignificant flaws that were small potatoes in the grand scheme of a camera's design.

To be clear, none of the companies whose cameras I am currently working with had anything at all to do with my selection process and nothing at all to do with my decision to buy. No early deliveries were offered and no discounts proffered. The Olympus, Nikon and Panasonic cameras I own were all bought new, and at retail (same price for me as for you..dammit.) at Precision-Camera.com in Austin, Texas. All six cameras.

I mention this because I see all over the web that so and so is a "fanboy" and must live at Nikon or Canon's teat. I want everyone who reads one of my reviews to know that I'm tossing my money into the same pit everyone else is and those greedy bastards at Olympus, Nikon and Panasonic haven't even stepped forward to offer me a mouse pad, a pen, a promotional baseball cap or a t-shirt with their logo emblazoned in 100 point type, across the front and the back.

If I toss my money away buying a second Panasonic fz 1000 you can rest assured that I didn't get to go to Bora Bora or Tahiti for free in order to pick it up. Its passage of ownership from the store to me was not presaged or dependent on a good night's rest and dinner at a Ritz Carlton or Four Seasons Hotel, avec room service. My mastery of the camera; or at least my mastery of a language to describe the virtues of a camera, were not earned over canapés at the pool in Beverly Hills or effected by shooting bikini clad super models in some coastal paradise.

I really have quite an idyllic existence here in Austin and like to think I'm harder to buy than the general forum reader presumes.

Which leads me to my next line of thought: Why do we go back again and again and read the stuff that our jet set reviewers write about cameras? How are they so magical that they can hold a camera in their hands for a week or so, totally understand its every nuance and menu item and then write about it so prolifically? If they are working photographers then where in the heck do they find the time? if they are not working photographers who've given the machines a long and sweaty workout under pressure then why do I care what they say?

There are good sites that do honest reviews. We mostly all read them. But I'm starting to get annoyed at the sites where the entire raison d'être is the uniformly gushy camera review and nothing else. Maybe these guys could spice it up a bit by writing about photographs too. Or at least the occasional ten point list about "how to convince your models to take off their shirts." To hear that the placement of X button is "about one point five millimeters too far to the left for their comfort" is......boring.

Posted by Kirk, Photographer/Writer at 08:06 3 comments: