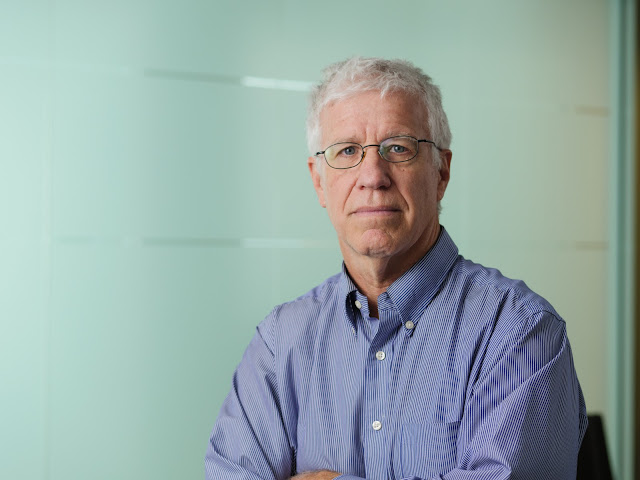 I was setting up to shoot in a conference room downtown this morning. I had an hour to put together the lighting and design of the shot and used myself, as a halfway willing model, to stand in. The conference room is lit with a bunch of different light sources as well as a wall of frosted, tinted glass windows. I used an LED panel, shining through a 50 inch, round diffusion panel to the left of the frame and a silver bounce reflector about ten feet back on the right. I also added some LED panels with warming filters to the back plane.

With all this light bouncing around I knew I wanted to do a custom white balance. I set up a gray target and made a white balance while using the Panasonic 42.5mm f1.7. As I continued setting up I tried several different lenses to see what the cropping would look like with a 50mm and a 40mm focal length. When I switched from the 42.5mm to the 40mm I was surprised at the difference in color between the two lenses. Nothing else was changed and both lenses were stopped down to equal apertures, yielding exactly the same exposures, as measured by the GH5's internal waveform monitor.

The older lens, the 40mm, was much warmer and stumbled into a slight yellow cast. Using the same white balance target and re-setting the color balance brought the two lenses much closer in final color. The third lens had a slightly cool, or blue, tendency compared to the modern Panasonic. It too could be made to get close to the 42.5's color when custom white balance. Without the custom white balances the images created by each lens were quite different.

This reminded me that for precise work a custom white balance actually needs to be done between lens changes. It was a sobering reminder that some of what we do is more of an art (or craft) than a science.

While I am not a good portrait subject my client this morning was. I was delighted with what I finally came up with as a lighting design for her. I think I'll work harder at staying behind the camera.....

Working with precision? Did you know different color balances also change exposure? New rule: New lens on the scene? Custom white balance and create a channel for that particular lens. It's a good way to eliminate the need for color matching between files in post.

It's fun to experiment. Sometimes I learn stuff...
Posted by Kirk, Photographer/Writer at 12:17 14 comments: